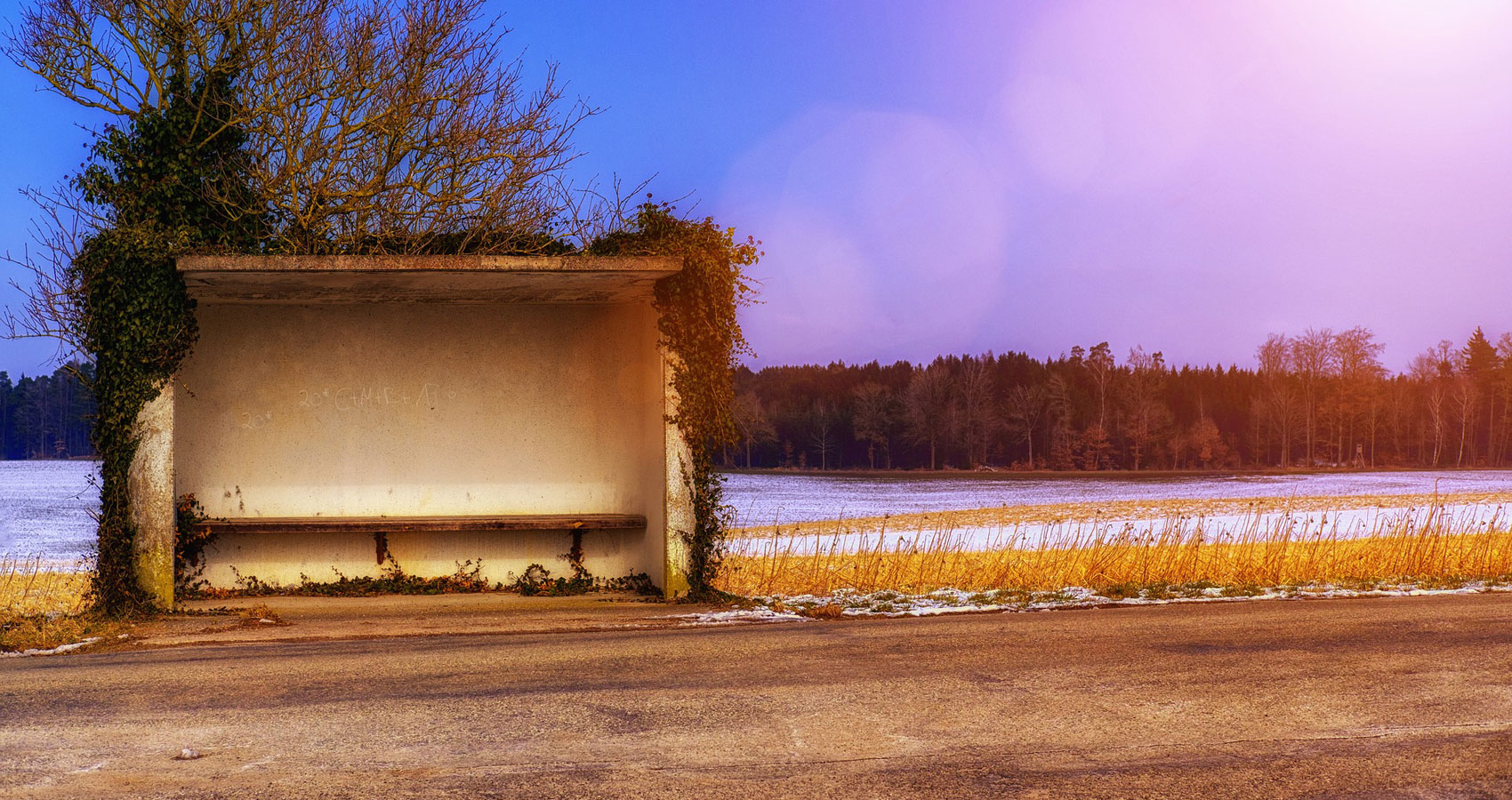 Another Bus Ride for Sunny

Another Bus Ride for Sunny

I know I’m not supposed to, but I do it anyway. She’s too perty to refuse. I mean, no fare—no ride. That’s it far as the City Lines is concerned. But so what? It’s not much more’n five miles—five miles and three-tenths, to put a point on it. I done checked it several times. Still, it’d be my job if some of them higher-ups ever knew ‘bout this. But they don’t. Not ever likely to, neither. Not a one of ‘em ever rides this route. And it’s a sure bet none of ‘em even lives on this side of town, much less in that stretch ‘tween here and Deer Ridge. That’s right at the end of my route. You’ll see here perty soon. Turn around there and drive back down the long hill, through the South Side and right on into town. And Deer Ridge’s where she lives. She walks up the holler there to the road, and I bring her on into town.
Yes sir, I go right ahead and give Sunny a lift every afternoon at 3:30 sharp and take her into work at that greasy spoon ‘n beer joint on Sixth Street. You know where it’s at, don’t yuh? Yeah, right close to the bus terminal.
Anyway, as I was tellin’ ya, I take her into work every afternoon and bring her back home at midnight on my last run. Most times there ain’t many people ridin’ then. I get back to the terminal ‘bout 12:45. Damn long day for both of us, I can tell ya that!
Nobody ever notices that I don’t charge her no fare, though. So don’t yuh go ‘n tell nobody, neither! Been doin’ it for a coupla years now—two years and four months to be exact. B’sides, I’ll bet she could scarce afford t’ pay the fare. She sure wouldn’t be workin’ in that place if she could, her bein’ a mother to three kids with all them bar bums slobberin’ round ‘er. Why, I’ll bet the poor girl don’t make much more’n hundred a week, even with the tips them slobs leave.
You know, she tells how her mom takes care of the kids for her when she’s at work. An’ then her daddy’s been dead all these years, since she was a little girl, so she’s had a pretty rough time of it. One thing though I never could get out of ‘er, or figured out for myself, is just what her husband does. She always says he travels a lot cause of his job, an’ so she needs money ‘tween the times he comes an’ the times he goes. Don’t make much sense t’ me, though. I know if she’s my wife, I’d change jobs before I’d leave ‘er in a fix like that. But she’s ain’t mine, so guess I got no room for talkin’.

U-u-h, Gladys, where’s that damn bus? Seems I spend half my life waitin’ for it. Always feels like it’s late even though I know it never is. Dear ole Eddie wouldn’t dare be late for his “Sweetheart of Deer Ridge,” now would he? I’ll bet I haven’t paid that poor SOB a nickel’s worth of fare in two years! Don’t plan to, either, not if I can avoid it. Let me get on first an’ you just watch. I won’t drop a coin and he won’t say a word about it. All I have to do is show him a little leg once in a while and his eyes ‘bout drop out. Did that the first time I rode the bus to this job an’ he was drivin’. That and told him my tale of woe ‘bout all the bar flies I gotta swat at all the time. Course that part’s true. And ‘bout my daddy bein’ dead an’ all. An’ prob’ly he is by now, for all I know. Anyhow, been ridin’ free ever since.
An’ I’ll tell you what else. He ‘bout goes green with jealousy when I tell him about any of the guys I meet at the bar. What a dumb clout! Bet I could get him to marry me if I wanted to, now that his wife’s left him. But just to keep him in his place, I done told him I was already married. Imagine that! But I don’t want a bus driver, no how. No money—not enough for this girl, at least!
Lord, I hate goin’ t’ work t’day. But it’s better’n stayin’ home with them squalin’ kids. Let Mom do that. She’s got nothin’ better to do now that all her boyfriends have given up on her, just like Daddy did. Guess they think she’s losin’ her looks, which she is. I been tellin’ her that for a long time now, but she won’t listen. ‘Take care of yourself,’ I tell her, ‘a woman’s got to do that to survive in this world.’ But she don’t do it. She’s always screamin’ back at me ‘bout the kids havin’ nothin’. Well, without boyfriends, she ain’t contributin’ nothin’ anymore herself. And get this, she wants me to pay her for babysittin’ when she lives right there is the same house, her own house at that! Now, Gladys, don’t that beat all?
The one good thing, it’s Saturday and that’s payday for me! Of course, tomorrow Mom’ll be fussin’ ‘bout how I don’t get nothin’ for her nor the kids when I do have money. Their clothes are a might raggety, I give her that. An’ we got some doctor bills too, always do. But I got to have some new pantyhose for this job, some nice dark ones that’d look real good with my white waitress dress. That’ll be the ticket! That and get ole Bill Smithers loaded again one of these nights when he’s been arguin’ with his wife. Then he’ll slip me a twenty, maybe more, for some comfort. That might just happen soon! Bet his wife would really bang him over the head if she knew ‘bout it. Oh well, it’s his head, not mine.
Oh, here it comes, Gladys! Look up the highway there! Just about on time, too. Now you watch, when we get on, Eddie’ll say, ‘Nice day, Sunny.’ Just watch. Says it even when I standin’ in snow up to my nose—like it makes his whole day just seein’ me. Well, maybe it does.

My, though! It sure is nice to see her twice a day, ‘cept for Sundays, of course. She’s always standin’ out at the end of this dirt road there in Deer Ridge. That’s the bus stop and turnaround. It’ll be on your right, comin’ up soon. Anyhow, that’s where Sunny waits an’ that’s where my sun comes up, even though it’s afternoon.
Naturally she’ll be wearin’ one of them white waitress dresses. Hers is kinda short an’ she’s none too careful ‘bout keepin’ it pulled down when she sits. Sometimes not buttoned proper at the top, neither. But you can tell it never occurs to her t’ think about such things, or how somebody might be lookin’ at her when she steps up on the bus an’ sits right there where you are an’ crosses her legs.
No, the good Lord made a fine an’ pure woman when he made Sunny. You can tell that just by lookin’ at her—with all that long bright hair, just as if her name itself were apourin’ out from her head an’ acurlin’ right down to her shoulders. Why, you’d swear it’s a real shock of gold. Yes, sir, a real fine young lady to see and talk to, Sunny is. You’ll see. She’ll be there. Always is. Three-thirty in the afternoons an’ twelve-fifteen at night. ‘Cept now on Saturdays. Some Saturday nights she don’t go back with me on my last run, so I don’t know if I’ll see her tonight or not. Asked her ‘bout it one time. Said she sometimes has to work late to clean up every now and then. Don’t really know how she gets home those nights. Maybe her boss gives her a ride. I never asked about that. Guess it’s none of my business.
Hey, lookee! There she is! Just like I told you. Now scoot on over some, Bill. Give her some room. . . . Hi, Sunny! Nice day, ain’t it?