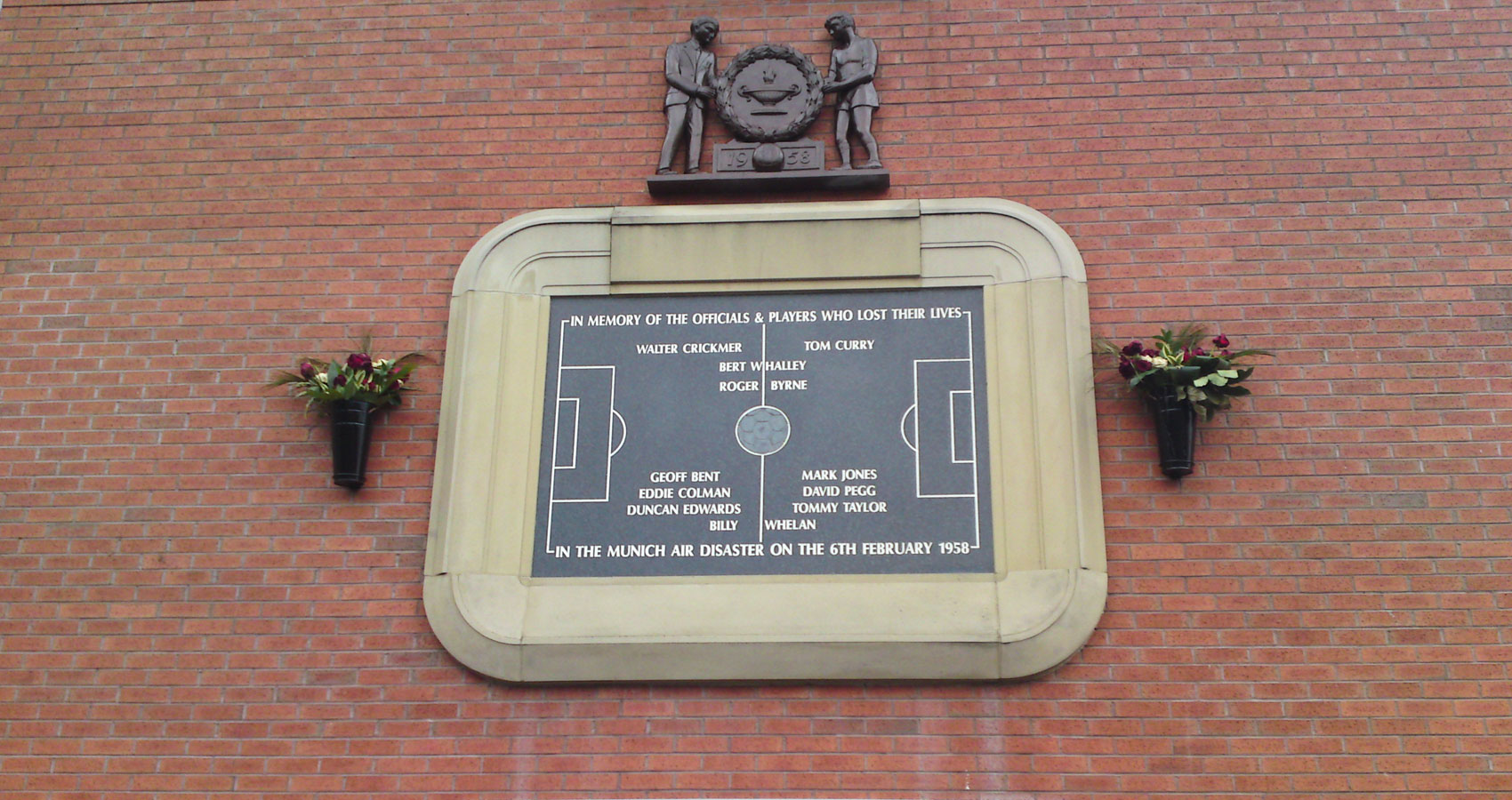 On a snow shrouded sixth of February
nineteen fifty-eight,
the ‘Lord Burghley’ Ambassador took off an hour late.
From Belgrade to Manchester after a three-all draw
they landed in Munich to wait for a thaw.
Europe’s Top Cup…Semi-finals now waiting,
sat on the runway cold engines hesitating…
Up slippery steps, banter and card schools dealt,
pot luck where they sat, for a tight seatbelt.
B…E… A…  six-o-nine roared into life
while Bela Miklos held tight to his wife.
Rolled twice through deep slush to 85 knots…
Pressure gauge low… the plane had to stop.
All off for a brew, Mark Jones lit his pipe,
late going home, but nobody griped.
Fastened overcoats, downed stewed tea
due now for lift off at fifteen-o-three.
Captain Thain and Co-Pilot Ken
slowly revved up to one hundred and ten.
The boys thought of home and seeing their girls…
Brave Billy Whelan said to his pals…
‘Well, if this is the time…I am ready.’
as the Ex R.A.F. aircrew held the kite steady.
They attempted to take-off, the final third,
engines strained to gain a soaring bird.
Passed the return point,
the plane slushed offside,
skidded through fences, across the white tide.
a German home, a garage, bedevilled their slide…
The Airspeed 57 just lay on her side.
Great keeper Gregg made the best saves of his career,
rescued Vera and Vesna despite his dazed fear,
went back for his teammates to help pull them clear.
Eight Busby Babes became ageless that day,
young men forever, in Heaven they play.
Captain Roger Byrne, born leader from Gorton,
Pendleton’s finest full back, Geoff Bent,
‘Snakehips’ Eddie Colman, from Ordsall, the youngest that went… PTO
Doncaster lad David Pegg on the left, out wide
Dublin’s fleet footed Billy Whelan inside,
Mark Jones, Yorkie centre half, to turn back the tide,
Dudley’s colossus, Big Duncan, stood firm alongside.
Barnsley’s Tommy Taylor led the front line.
Accompanied by ‘owd boss Walter Crickmer,
Trainer Tom Curry and team coach Bert Whalley,
who magic-sponged their shins when they got hurt.
New dad Bela Miklos, fan Willy Satinoff,
Captain Rayment and steward Tommy Cable…
All now sit on God’s top table…
with
Frank Swift and seven sports writer mates
still typing up big match updates.
Red Star pleaded with Uefa…
‘Respect! Wise up! Award United the Champions Cup. ‘
Alas a 5-2 with Milan ended our run
a heartbroken semi, it was over and done.
Winger Johnny Berry,
half back ‘Twiggy’ Blanchflower
broke their bones
lost footballing powers,
lucky to rise from their hospital beds
never again pulled on Red Devil’s Red.
Other scarred Babes healed,
played on to glory those names…
led by Sir Matt and Jimmy Murphy
to football’s acclaim…
Brickwalled stopper…new skipper Bill Foulkes,
Thunderboots……………….Bobby Charlton.
Keen right winger…………..Kenny Morgans.
Artful dribbler……………….Albert Scanlon.
Deadly in the box…………..Dennis Violet.
Gifted goalies Harry Gregg and Ray Wood.
All these players did everything they could
to honour those boys up in the sky
And keep the Red flag flying high!
God Bless Them All.

In memory of the tragic Munich air crash of the Manchester United football team in 1958.