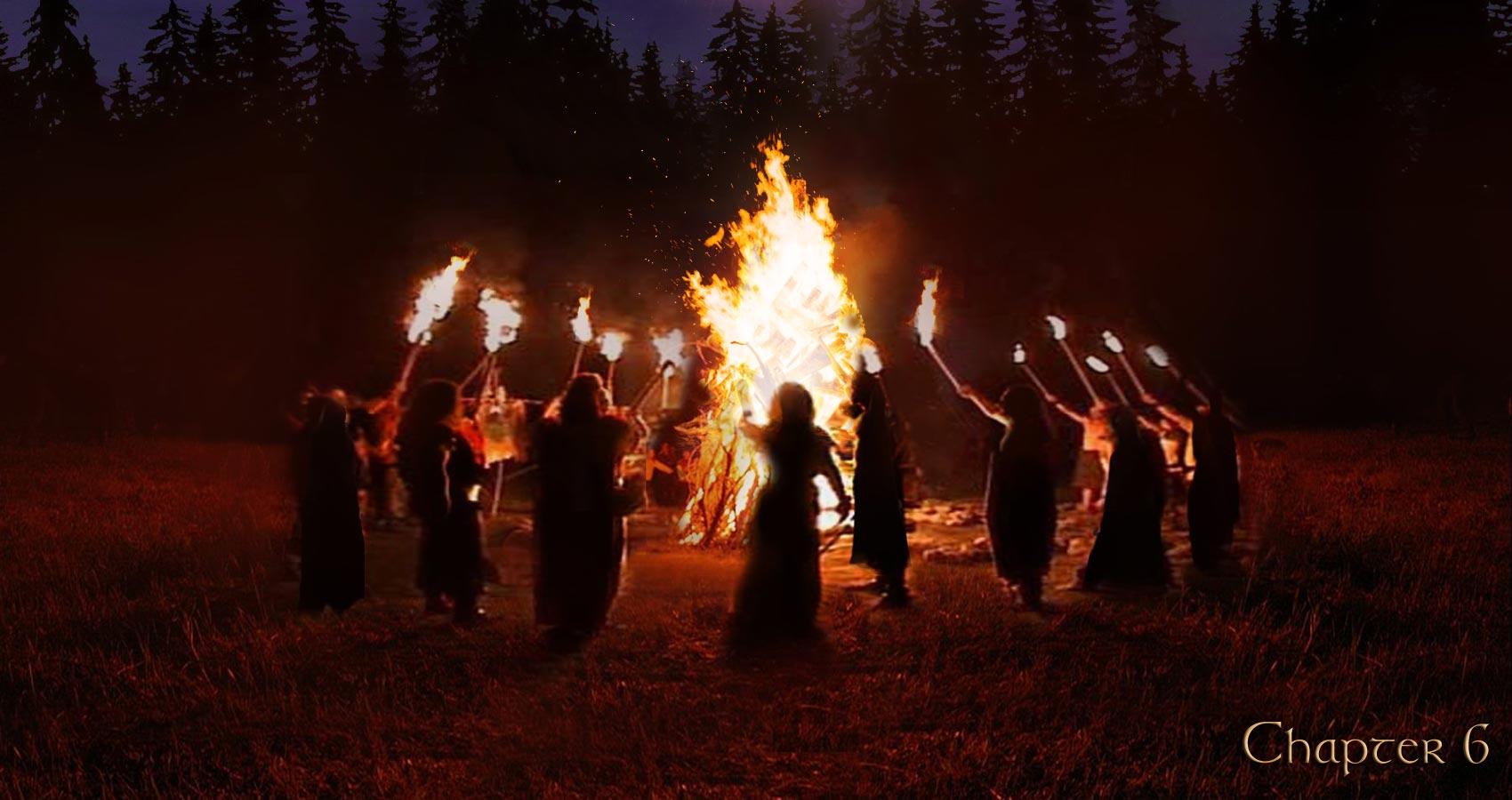 In her panic, Arvasia had gotten lost in the woods while running from Rawena. When she heard the bell, she dashed toward the sound for help.
Rawena had also heard it, though, and she must have guessed Arvasia’s intentions. She had caught and overcome Arvasia near the gate shortly before Garux sneaked out to look for them.
Rawena made her walk back to the creek, grasping her hair and pressing the point of the dagger against her back. Arvasia wondered whether it was the eclipse that made her sister so mad yet cold-blooded.
Rawena often threw tantrums, but they never lasted long. She would screech, break things, pull her hair, and scratch her forearm, and then she would grow remorseful and apathetic, as if her fury flowed away along with the blood from her broken scabs. Arvasia would expect her to lash out and threaten her, and calm down and apologize the next moment rather than leading her around the woods at knifepoint.
Arvasia hoped Rawena would come back to her senses when the eclipse passed. She didn’t think Rawena would hurt her, despite her bizarre behavior, as she had never been cruel to her, not even when they were little. Rawena had taught her how to clean mushrooms, scrape fire from a flint, and use a fishing rod, and she had always turned the lessons into games to make them more fun. When Arvasia had found nothing during her first mining expedition, Rawena had dropped a large opal into her bag and told her to tell everyone she had found it.
“Oh, Rawena, why are you doing such things?” Arvasia asked. “Scaring your sister like this . . . Don’t you love me anymore?”
To her surprise, Rawena sobbed.
Encouraged, Arvasia turned her head to her to plead with her, but Rawena yanked on her hair. When she titled her head back to ease the pressure, Arvasia noticed three little torchlights twinkling against the low sky.
She took a breath to call for help, thinking it was Garux and Mother, with perhaps Vitis walking over a hill and looking for them. Then she realized it could be the Marcomanni, and she swallowed the scream that was forming in her throat.

Seneusia was still by the gate, pleading with Druidess Agira to organize a search mission, and arguing with Ateran, who refused to let anyone out. Agira listened in silence, her tiny but alert pupils darting from Seneusia to her grandson. Suddenly, she swayed and rolled her eyes upwards, and everyone fell silent. They had seen her like this before: Agira was lost in a vision.
“I see three black figures . . . and another three!” she said. She spoke so softly that only those standing around her could hear her, and it seemed she was talking to herself. She kept moving her lips, but her voice faded below a whisper.
Seneusia watched her with a held breath. Druids could communicate with the entities of the Otherworld and peek into the past and future, and Seneusia wished she could see through Agira’s mind’s eye.
Agira shook her head and rolled her eyes back down. “One girl can be saved,” she said. “The other is enveloped in a strange, dark fog that my mind cannot penetrate.”
Seneusia gasped, wondering what it meant. She hoped the druidess would tell her where to search.
Agira turned to Ateran with a glare. He cringed and stepped back as she shuffled closer to him.
“Step forward, worm!” she screeched. “Don’t you dare run away from your grandmother!”
Ateran froze and hunched his back. His porcine face paled with fear. Agira took another step, grabbed his ear, and twisted it. Seneusia’s hopes soared.
Ateran screamed. “Nanny! My ear!”
“I crap on your ear, worm!” Agira screeched, twisting his earlobe harder. “Why do you have to be such a chicken? Huh? Now listen, listen carefully. You’ll take the soldiers and volunteers and start looking for the girls. You must lead them downstream along the creek, beyond our hunting territory. I’ll be watching you from my shrine, understood? Cowardly you act, and I’ll turn you into a hog!”
“Yes, Nanny,” Ateran ground through his teeth.
Vitis and the soldiers erupted in cheers. Most of the commoners grinned and volunteered to come along.
Agira turned and winked at Seneusia, who realized Agira had been bluffing . . . although she guessed the druidess could really watch people through ritual or meditation, and turning Ateran into a hog wouldn’t take that many magic skills.
Agira turned to the crowd and called, “Everyone who wants to go, make sure you are well armed!”
“Thank you for everything, revered woman!” Seneusia called as she rushed to her house for her late father’s battleax.

A dim shadow still obscured the right side of the moon, but the moon had recovered all its silvery splendor. The lights of the three torches got a little closer, then they receded, and Arvasia wasn’t sure whether to despair or rejoice. Rawena didn’t seem to notice them. She kept leading Arvasia along the creek, pulling at her hair and pressing the point of the dagger between her shoulder blades.
Something scurried in the bushes. Arvasia felt a pair of eyes following their every step.
Rawena murmured under her breath, but Arvasia couldn’t make out the words over the bubbling water. Then Rawena led her away from the creek to circumvent a sprawling thicket, and Arvasia understood: “She might not kill her, oh, I pray she won’t. She’s just mad and lonely, and curious about humans. Perhaps she won’t let the evil disease of her swamp murder her.”
Terror clenched Arvasia’s soul. Had the dark powers of the Otherworld possessed Rawena’s mind? Was she taking Arvasia as an offering to a female ghoul or malevolent goddess? That thought made her scream.
Rawena jabbed her spine with the dagger, and Arvasia’s scream ended in a groan of pain.
A man called in the distance. “Arvasia?”
Arvasia’s heart leaped with hope: it was the voice she had longed to hear.
“Garux!”
Rawena gasped and let go of Arvasia’s hair. When Arvasia felt that the dagger’s point no longer pressed against her back, she skipped forward and ran toward Garux’s voice. She only took a few steps when Garux rushed into the moonlight from behind a row of trees.
“Please help me, my love,” Arvasia exclaimed, clasping his forearm with both hands. “She kidnapped me!”
Garux winced at the blood on Arvasia’s throat. Then his eyes shifted to Rawena and the weapon in her hand.
“I could kill you for that, Rawena,” he said, drawing his dagger.
Rawena laughed. Brimming with despair and insanity, her laughter fitted that terrible night. She walked toward them, and Arvasia felt Garux’s body tensing. Thinking that Rawena would attack him, Arvasia let go of his forearm and spread her fingers like claws, ready to scratch her eyes.
Rawena halted a step away from them. She raised her dagger and—dropped it to the ground.
“So you want to kill me for kidnapping my sister, Garux?” she asked, sorrow straining her voice. “That’s what you want to do? Then do it!”
Garux stood still.
Rawena spread her hands. “Do it! Do it!”
“Sister, please,” Arvasia muttered, tears stinging her eyes.
Rawena grabbed Garux’s dagger wrist, lifted his hand, and pressed the point of the blade against her heart. “Do it, my love,” she said with an eerie smile on her moonlit face. “I love you enough to die for you. And such horrors I have seen that I no longer want to live.”
Garux swallowed and shook his head. He twitched when Rawena uttered a shrieking laugh. Arvasia pressed her hands against her ears to block the dreadful sound. Rawena laughed again. Then she thrust the dagger into her heart with all her force.
Her eyes bulged, and she coughed up blood. She staggered backward, blinked, and looked down at the hilt, as though she couldn’t believe what she had done.
When Rawena collapsed, Arvasia shrieked and dropped to her knees. She stared first into her sister’s staring eyes and then up to Garux, as if to beg him to revive her.
Garux also kneeled. The horror and the moon turned his face deathly white.
Arvasia pressed her ear against Rawena’s chest. The silence told her Rawena’s heart had stopped beating.