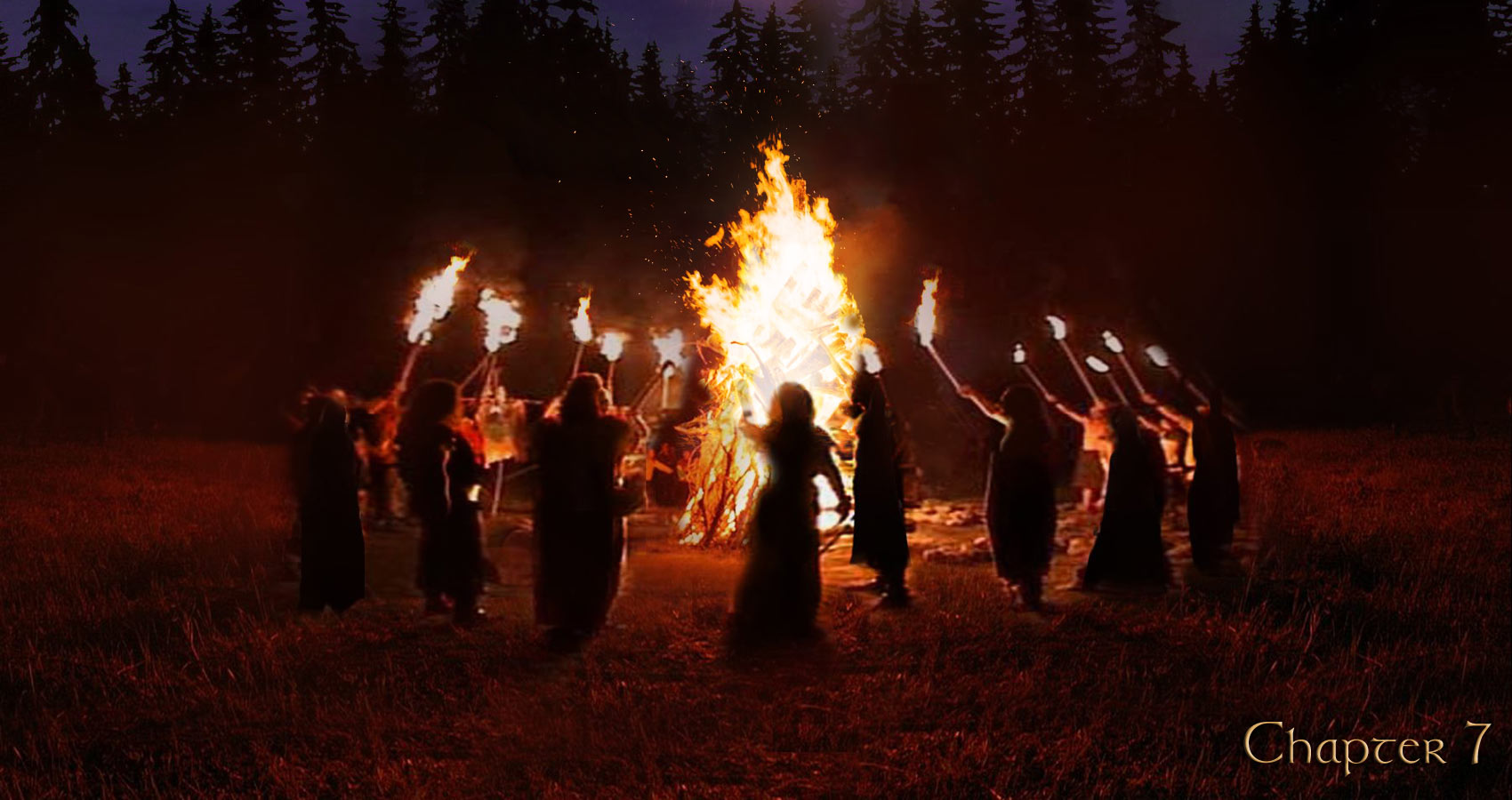 Rawena had felt Arvasia’s tears fall on her face. She had seen her and Garux twitch at the sound coming from the bushes and run from the attackers. She had heard the faint sounds of the skirmish. Then a long silence came, and she stared at the full moon, trying to understand. The moon stared back at her through the branches of an oak tree, offering no answers.
Something rustled by the creek, and Rawena feared that Pandemia would come and snatch her. The rustle ended, and a moment later, numerous footsteps came from the other side of the woods.
Her mother rushed into Rawena’s field of view and dropped to her knees, wailing. Rawena felt her mother’s warm, trembling hands against her cheeks. Arvasia kneeled beside Seneusia, and Garux followed suit. Many tribesmen gathered around them, and Rawena saw, heard, and even smelled them all.
But she was dead. Wasn’t she?
She had to be, as she had thrust Garux’s dagger into her heart. So why did her soul still linger inside her body?
Fear crept through her mind when she guessed the truth: Pandemia had brought her back to life. But why? As punishment for the broken promise?
But it wasn’t my fault! Rawena wanted to scream, but she had lost control over the muscles in her mouth and throat. She wanted to look toward the creek to make sure Pandemia wasn’t coming, but she couldn’t move her eyes. Would her body return to life? Or would her soul spend eternity inside a corpse?
Rawena noticed her sister was contemplating her with alarm.
“Look at her eyes,” Arvasia whispered. “Staring at us, almost as if she were alive!”
Seneusia kept sobbing, and Garux stroked Arvasia’s hair.
Resentment flushed through Rawena’s soul.
“I can’t stand it,” Arvasia said. She stretched her hand out toward Rawena’s eyes, but Seneusia slapped her wrist, and Arvasia put her hand back down.
“Don’t you know that only the druidess can close the eyes of the dead, innocent girl?” Seneusia told Arvasia, her voice drowning in tears. “It brings bad luck to the deceased’s spirit if anyone else does it. Let her be, Arvasia.”
“She does look alive,” Garux murmured, peering into Rawena’s eyes. “But there’s nothing we can do to bring her back.”
The sorrow in Garux’s voice filled Rawena with happiness. Her desperate act had made him realize how much she loved him, and he would return her feelings. They could become lovers yet!
Seneusia wiped her tears and asked, “Who did this to her?”
Rawena saw Arvasia and Garux exchange a nervous glance.
“It was those Marcomannic bastards, Mam,” Arvasia said. “We tried to help her, but they killed her and chased us into the woods.”
Liar! Rawena screamed in her head. Why don’t you tell Mother that you stole my future husband?
“So she died in a fight—the most honorable death,” Seneusia said. She sounded stronger, and her tears dried. “My poor girl has earned a commendable status in the Otherworld.”
The last word made Rawena’s mind squirm with fear. The Otherworld was the home of unearthly monsters. Did they torture those who ended their own lives? And, when they were done with her, would Pandemia come for her and drag her back into the swamp?
Seneusia sniffled and sighed. “We must rejoice that her attacker is dead.”
“That’s true, Seneusia,” Garux replied. “What’s more, I’m sure it was the one you killed.”
That clever lie surprised Rawena. She hoped the other two Marcomanni had also died. Apart from being invaders, they had probably led Garux here while stalking her and Arvasia. If it wasn’t for the Marcomanni, Arvasia would have been in the swamp, and Rawena would be free to seduce Garux. Besides, it was the Marcomanni who had chased Rawena into the claws of that horrid Pandemia.
Seneusia stood up and glanced around. “Let’s take my girl out of here. Let us go back to town before more Marcomanni come.”
Vitis and two other men stepped forward and helped Garux lift Rawena. She wanted to blink or twitch her fingers to show them she was alive, for she feared they would bury her alive in a black, dank grave. Her every muscle was paralyzed, though, as if death had claimed everything but her mind.

Funerals were a grand occasion in the tribe. In the winter, the dead were displayed in their houses for seven days, surrounded by burning candles, mourning relatives, and commiserating visitors. Although they had buried Rawena on the morning following her death so she wouldn’t rot in the summer heat, they sent her to the Otherworld with all the usual fanfares and ceremonies. Rawena was laid to her grave in her finest clothes and jewelry, with candles and bowls of food and drink to make her journey more pleasant.
But Pandemia wouldn’t let her leave.
As night fell, the rat-goddess swam across the swamp and stopped by the putrid waterfall. She scratched her golden hair with her long fingernails and sniffed. Shutting her eyes, she concentrated on the location of the town’s burial ground until a tunnel cracked open in front of her. She dashed into the tunnel and ran on all fours underneath the forest.
When she arrived in Rawena’s grave, Pandemia sniffed Rawena’s body and the food she’d been buried with. She lifted her hands, and a shaft opened to the surface, sideways to avoid three large granite slabs and a mound of white stones that covered the grave.
She stuck her head out of the shaft. The night air smelled of dogs and freshly dug earth. The burial ground resembled a vast, walled pasture, with barrows of white stones standing around like desolate sheep to mark the resting places of the dead. Some stones had grayed with age, but Rawena’s barrow glistened like a pile of pearls in the sickly moonlight.
Pandemia returned into the grave, grabbed Rawena, and dragged her through the shaft. As they emerged, crickets stopped singing, and plants withered. A dog skulked toward them. Pandemia hissed, and the dog yelped, turned around, and ran. She giggled as it leaped over the creek that separated the town from the burial ground and disappeared in the shadows of the first houses.
She turned to Rawena and removed her funeral shroud. Rawena looked just as she had when Pandemia had met her, only with less color on her face and more jewelry around her neck and wrists.
Pandemia rubbed the hem of Rawena’s underdress, admiring its softness. Then she pulled up Rawena’s eyelids.
The moonlight fell on Rawena’s pupils, and they contracted. Her chest heaved. She opened her mouth and gasped for air as if she’d just emerged from underwater. As Pandemia balled the shroud and threw it into the grave, Rawena moaned and lifted her head.