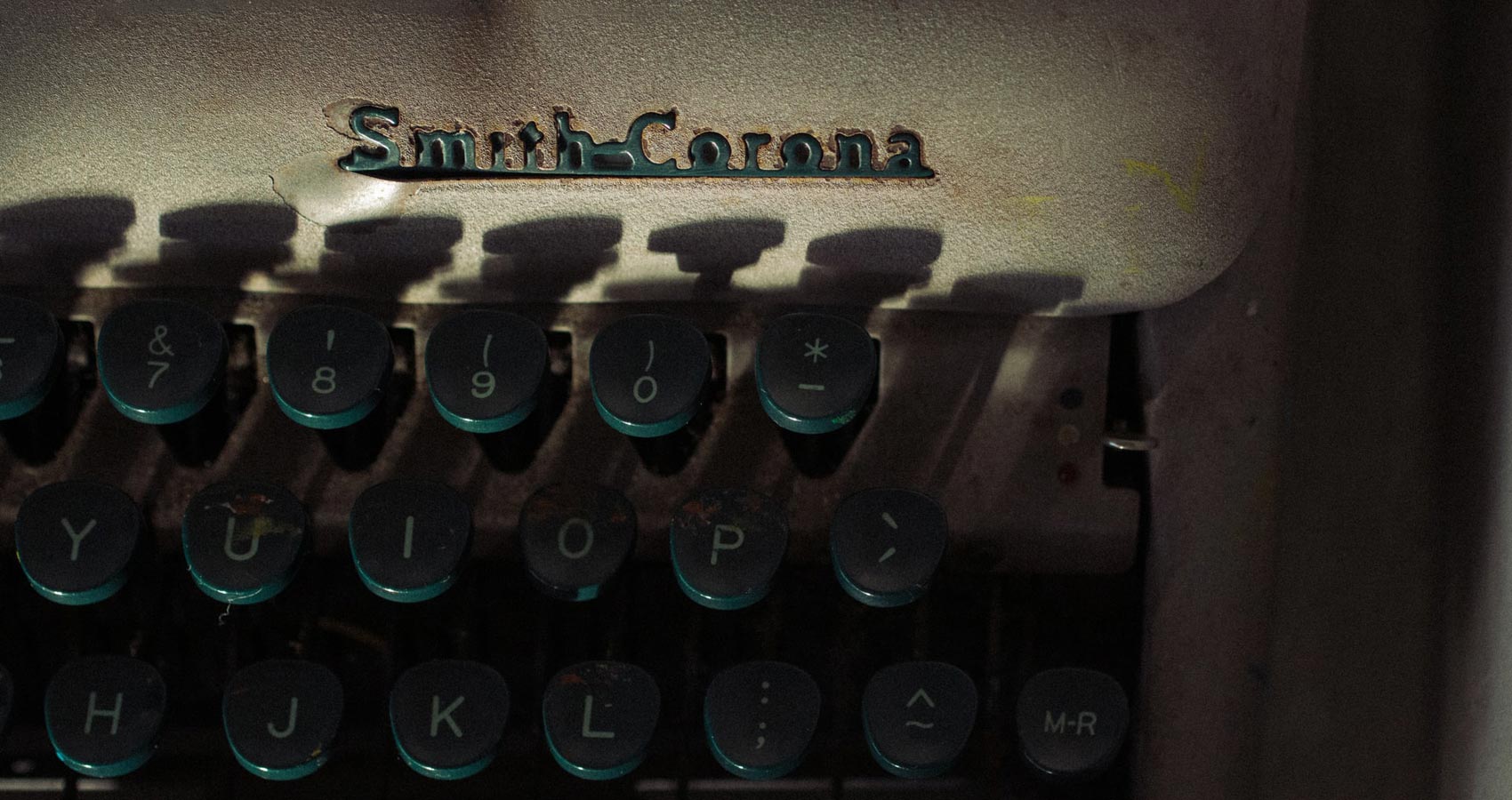 Death and The Writer

Death and The Writer

Charles had almost finished the last chapter of his third book when he died. A heart attack, nothing special. The rain was tapping against the roof of his rental flat, hot coffee cooling next to him. And only two hundred words left! Soon he would be free of this damn story which had been clogging up his thinking for the last year. It was then that Charles grabbed at his chest and collapsed face down on his desk, spilling coffee all over the manuscript.
Charles’ consciousness—a translucid billowy thing, human in proportion, coloured the deepest blue—drifted up from its mortal tethering. Charles looked down on his dead body and his ruined story. “And I was almost finished too.”
“Finished with what?” asked Death.
Charles wasn’t afraid to see a dark form floating in the corner of his study; he wasn’t in possession of a body that could produce the biological reactions necessary to feel fear. Charles peered closer at the figure. Beneath the swirling smoke-like darkness he caught glimpses of a ginning skull. He sighed and said:
“My book. It was going to be bloody excellent. And funny too, it had a whole satirical theme and everything.”
“Sorry about that,” said Death. “I absolutely hate interrupting people like this. Makes me feel quite awkward. Anyway, I suppose you’ll be wanting to move on now?”
“Say, there’s no way I could stick around for a couple of weeks? Just until I can finish the thing? I wouldn’t want to kill my reputation with a posthumous flop.”
“That’s it? I’m confused. Is the only reason you want to go on living that you haven’t finished writing yet?”
“It might not seem like that much, but art, real art is one of the most powerful–”
Death waved a skeletal hand and Charles trailed off. “There may be a way, if you were really desperate. I could permanently bind your consciousness to your body, but that’d be so painful it’s not even worth considering. You’d be better off coming with me.”
“Please, I’m begging you.”
“I’ll do this for you, Charles. Are you sure you understand what this means?” asked Death.
Charles nodded.
“Well ok, then. You know, I’ve always respected writers they’re just so loveably optimistic.”
Death held out her hands and pulled a scythe from the air- a monstrous thing that had a handle made of pure night and a wicked serrated edge. She touched the tip of the blade to the edge of Charles’ consciousness, then with a quick backhanded motion Death sliced through the dead carcass. The blade dragged Charles back into his body and restored him to life as if nothing had happened.

Charles got up from the desk and wiped the coffee from his clothes. Then seeing the damaged manuscript, he forgot about himself and rushed out of the study with the soggy pages looking for a towel. He didn’t notice the silent spectre in the corner of the room. Death didn’t mind; she was used to being ignored. Besides, there were other people to meet with that evening and more than enough time had been wasted. Death faded away into nothingness.
Charles’ book was published, and it was critically reviled, despite the satirical theme. But it sold well enough that his publishers let him write another one, and life went on. Charles grew older. As he grew, he wrote, and some of the things he wrote were even good. Good enough to pay the rent, at least. His hair turned white and fell out, his back started aching, and eventually the ideas stopped coming so Charles stopped writing.
Despite taking aesthetic enjoyment in creating romantic subplots, flirty digressions to appeal to the young adult market, Charles never really found anyone. Sure, there were a few women here and there, but there was no great love in his life. So, in his dotage, his only company was his books. He kept all sixty of his published works in a run-down old bookcase that he’d sit down in front of from time to time to admire. Thirty-five novels, fifteen plays, five short story collections, three poetry volumes, and two film scripts. The totality of his life.
As time marched on Charles’ body decayed. Slowly he became an emancipated husk of a person with papery skin, a dried-up throat, and sunken eyes. By the time the aging process had gotten that bad, Charles had lost all will to live. He’d lie in place hoping to die of thirst or hunger, but that release never came. Now and then Death stopped by to make fun of him:
“Hey Charlie boy! How’s it going, old friend?”
“Fuck you,” rasped Charles. It hurt to speak. “I didn’t ask for this.”
“Oh, but you did! That’s the kicker. I warned you about it, I did, but you begged me and who am I to refuse?” Death gestured to the dust covered and moth-eaten volumes on the disintegrating bookcase. “Wow, are these originals? How long have they been out of print two, maybe three hundred years?”
“What do you want? What do you get out of tormenting me like this, you sick bastard?”
“Oh, when you’ve been around for as long as I have you learn to appreciate the little ironies of life. You look rather put out by that. Same time next week, then? Don’t answer. Maybe you could try tidying up a bit. Rude of you to entertain guests in this pigsty.” Death disappeared.
After a few thousand years of this back and forth, Charles learned to laugh with Death about the irony of his position. He was still a motionless husk, but that didn’t matter so much, and he actually looked forward to the times when Death came visiting. However, these chats ended when what was left of humanity realised how much they hated each other and wiped themselves out in an inferno of nuclear blasts. Since everything was dead Death had no reason to come by. And Charles finally went insane amongst the ruins of an empty world.

A few million years later the planet began to heal, and the first signs of life started emerging. Charles watched as green saplings sprouted from the corpses of skyscrapers, flowers bloomed in empty shopping malls, and a green carpet covered the abandoned highways. Birdsong was echoing through the world, and one day, when Charles stumbled across a slaughtered Waxwing, he met Death again.
“Has it always been like this?” asked Charles. He didn’t really speak; his vocal cords had been destroyed along with the rest of his body in the inferno- Charles was pretty much a consciousness again. “How many civilizations were there before humans?”
“If you don’t count the dinosaurs, maybe five? You kind of lose track after a while. Do you mean on this planet or a different one?”
Charles didn’t answer.
“Well old friend, you seem to have shed your mortal form. I’m impressed, I didn’t think that was even possible. Would you like to move on now? I think you’ve earned it,” said Death.
“After all this time I’ve never really wondered what happened next, you know, on the other side?”
“Nothing. Sweet, beautiful, and endless nothing,” sighed Death. “I’m rather looking forward to it, actually.”
“Wait, you can die?”
“Stranger aeons and all that. When there’s nothing left to do for me, I’ll stop. Well, what do you say? Would you like to finally see that undiscovered country?”
“No, thank you, but no. Someone needs to remember, this needs to mean something. All of this, you, me, my life, humans, everything- it needs to mean something. Look,” Charles gestured at a greyish waxwing that had settled on a nearby bit of rubble to mourn its dead friend. “There’s life. Hope.”
“If that’s what you want my friend,” said Death.
“It is.”
They chatted for a while longer, then Death had to go see a lizard that had been consumed by an Eagle. And so, Charles stayed on in this world. He devoted himself to the remembrance of every man, woman, and child who had ever existed and everything they had ever done. All the wars, the charity, the art, all that was contained within him. And when there stopped being a need for Death, Charles held her inside himself too.
Trillions of years flew by, and Charles was the only living thing to see them. It got to a stage when Charles forgot why he was supposed to be remembering what he remembered, and so he focused on the images that made him happy. He saw himself reading a poem to his mother, how embarrassed he was of his first published works, various pleasant sunsets, and so on.
Soon a super-massive black hole was born, and it began eating up what was left of the universe. It grew and grew in size, merging and feeding on other black holes, and consuming entire galaxies at a time. Charles watched as the night sky above him slowly lost its colour, bit by bit, as the stars went out. The black hole reached Earth, and swallowed it up in one gulp, insignificant morsel that it was.
Charles’ essence was slowly pulled apart in a vortex of gravity and condensed down to a single point along with the rest of the universe. That singularity slowly fell through this plane of existence, bursting out into a new reality in an explosion of fire and pain. Charles was trapped inside the newly forming protons and neutrons.
A new universe came into being. With new stars and new planets and new forms of life. Charles could reach out and talk to the new life forms in the very instant they faded- as a gleaming skeleton clothed in darkness. He tried to remember them, along with… with whatever else he was meant to remember. But when he talked to the new people, they didn’t call him Charles. No, they called him Death.