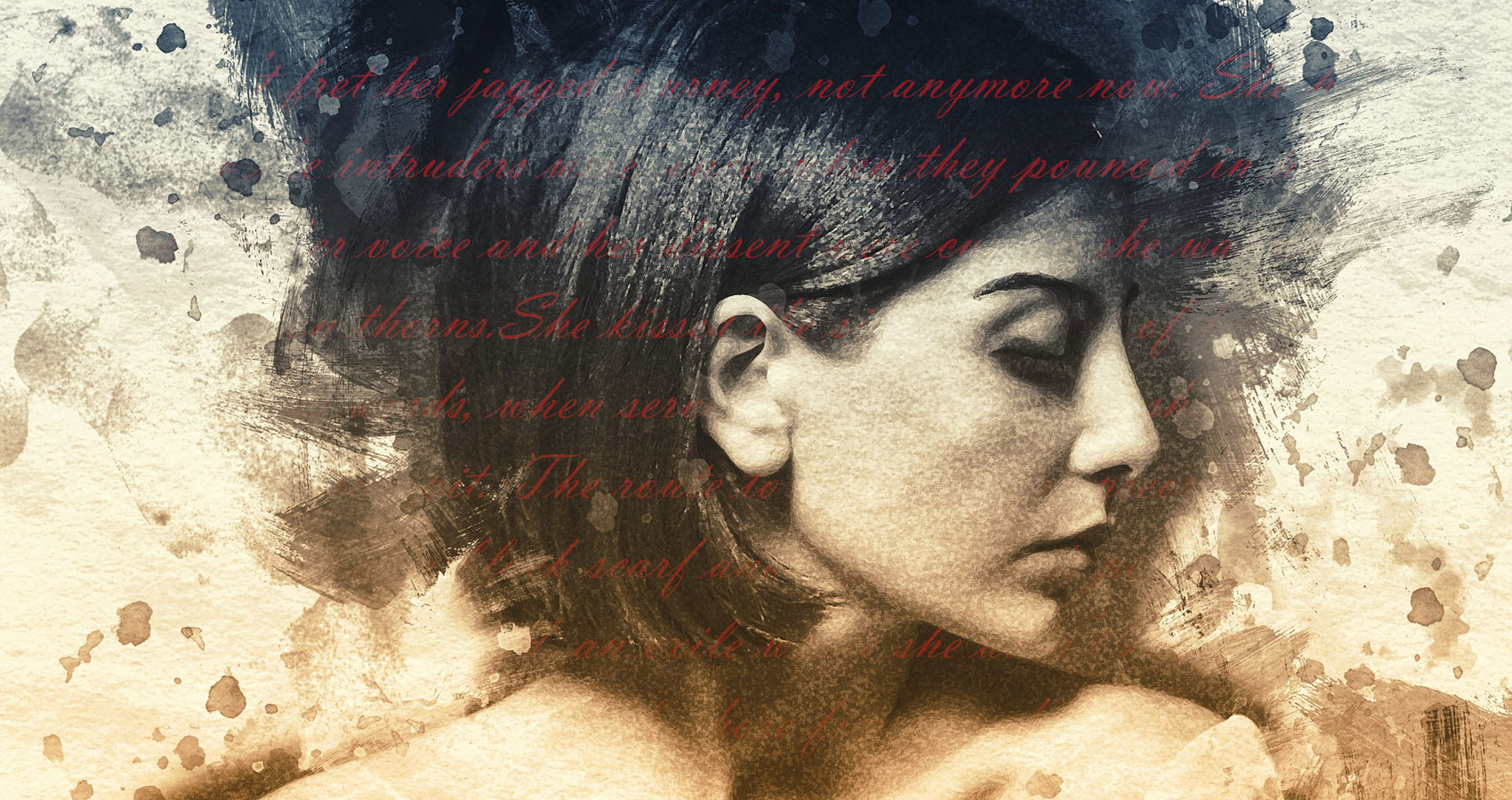 She doesn’t fret her jagged journey, not anymore now. She had questioned who the intruders were, once, when they pounced in her den, but she knew her voice and her dissent were cursed; she was walking, threadbare, on thorns.

She kissed the silken weaves of her verses, her blasphemous words, when servants of bureaucracy shoved her in a black, indefinite pit. The route to her exile was preordained– they blindfolded her in a black scarf and off she went, peeled and chipping away, to a faraway land, an exile where she didn’t know if her runny ink would scribble those fiery words anymore.

In the cold land, sheathed in her exile, she froze, imagining loose papers in her bedspread and craving to burst open in verse, her fearless lover who would never cease to make love to her, his masculine musk lingering in her thirsty lips, her navel, her abdomen.

The aroma and the sting of the words, tugging, tucked in her, had come out like froth, in shameless confessions of a girl in puberty, seduced by her uncle, tainted by her own kith and kin. The words wandered in the pages, wayward, dangling in the crimson, auburn, blue, green scattered splotches, scraping, tearing her chastity to pieces as her voice shone in them, unfolding her life.

The tags had come along, hurling in quick succession: “What a bitch! What a shameless zenana who talks about desires, unzips femininity, abuses the holy Quran, befriends, sleeps around with men, and more vicious, pens them with such deft brazenness!”

“We want her head! Burn her printed hell, choke her voice, strip her naked!” The rulers of a fanatic Bangladesh howled, ablaze, its flames catching up fast, relentless, in the sweltering Kolkata air. The docile young girls, brides, rubbing fairness creams in their tensed, taut faces, looked at the Television screens, eyes transfixed, gauging the fire, and the castigation of a woman, a human from their own ilk who dared to spit fire, the fire burning her rebellion to ashes.

In the icy, ghostly exile where she survived, amid foreign friends, she stumbled upon the looming sky, the strange, asymmetric beauty of alien tongues and the river’s foaming rush. Her furtive mind wandered in the quicksand of her dissolved childhood days at the banks of the river Padma, her feet itched to bleed again, burst in a naïve rhapsody in the cracked tiles of her childhood home in Mymensingh.

They had usurped her pen, her writing tools, but the rush of words pressed against her pounding breasts, in the dead hush of the night. Words tiptoed and wrote themselves in surreptitious caverns of the mind. “Do you weep for my red sari, my girly grins? Does your turmeric-stained kitchen seek me still? Do you miss my salty breath, tied around you like a fish bait?” She asked her old house, touching its blood and bones with her unwritten words.

“Don’t fret, if words fail you.” She told herself. “They will be rewritten; even if the fingers are battered, twisted. They will come back to you in splurges of want; lick your fingers and your sari like the lone cat you had nursed.”

She had gulped them all, the crisscrossing traffic, the haywire sky, the wild flowers and the alphonso mangoes of Bengal. The umbilical cord could never be severed; amid indefinite injunctions, the earthy soil of its being spilled over her, in spurts.

The pale, dusky clouds in the European sky took in the vapor of her furtive words. She knew, they had to rain; they had to churn a teary cauldron in another part of the world, a motherland that had banished her unruly daughter.