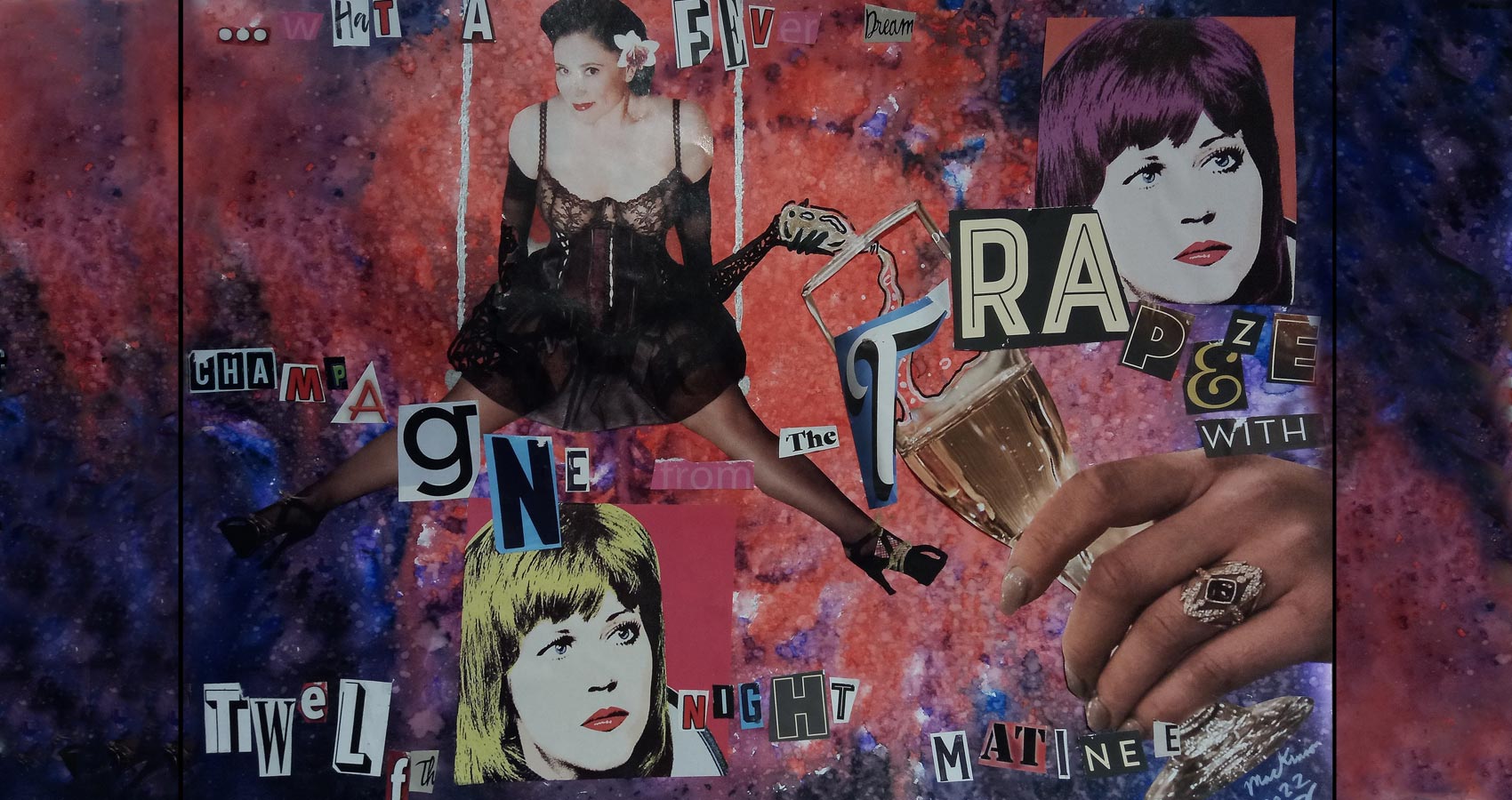 …what a fever dream

champagne from the trapeze with

Illustration description: A mottled, sprayed, cloudy background of red, wirh dark violet and blue seeping in at the edges. The upper left corner is occupied by a paper cutout of a feminine figure in a burgundy corset, short, sheer black skirt, and sheer black gloves. This figure is Alex Borstein, as depicted in the Dec/Jan 2006/7 issue of Bust magazine. She sits with legs extended to either side, and her hands hide behind them – or at least they did in the original magazine image. I took the liberty of adding a lower arm on the right side holding a bottle, pouring bubbly liquid into a glass of champagne. The lower part of the glove appears to be lace (a bit of artistic license). The other arm is also filled in with a bit of lace, and as is a corner of the skirt. The shoe on the right leg (left for the figure) is filled in marker and pen. The shoes are black, spike heel pumps with crossing straps and gold lacing. The figure appears to be a white woman with brown eyes, black hair in an updo, and a large, pink flower on her left ear (right side). She wears red lipstick, and her expression is neutral, and yet slightly sassy, as she looks sidelong at the viewer, head angled a little to the left (her right), a slight smirk on her face. She seems to be supported by a silver trapeze, rendered in a silver metallic pen. The champagne glass into which she pours from the bottle is half as big as she is, and held by a gigantic, tanned, neatly manicured hand with a gorgeous, jeweled ring on the ring finger. The nails are flesh toned, just a shade cooler than the colour of the fingers. A face is repeated in two parts of the image, once, under the trapeze figure, and once in the top right corner. They are the same feminine-looking face with shoulder length hair, bangs, blue eyes, and red lips. The one below the trapeze has yellow hair and a magenta background, while the top right one has purple hair and an orange background – an Andy Warhol-type palette swap. This is from the same issue of “Bust” as the image of Alex Borstein.