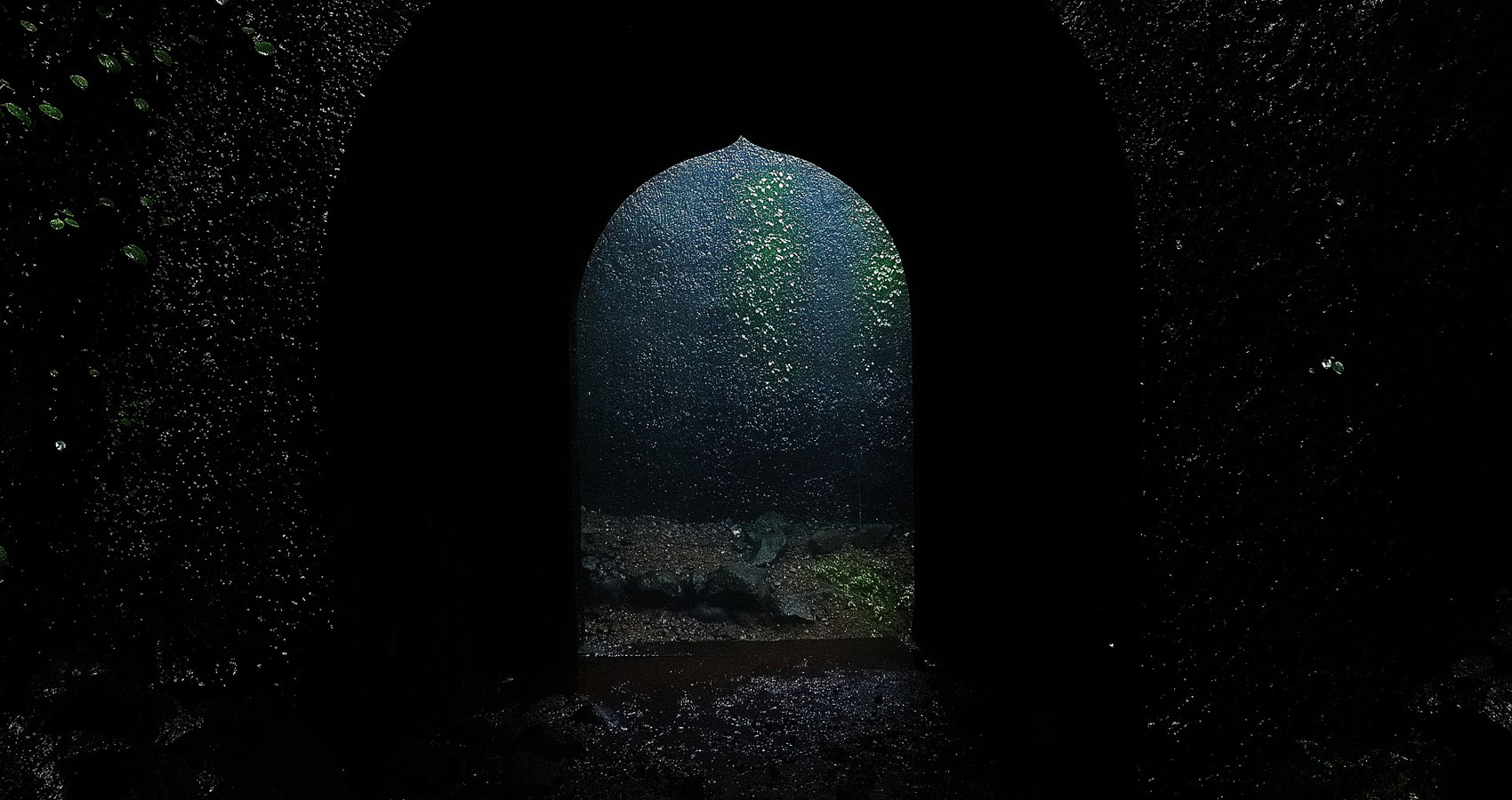 It is November, an odd time for rains, perhaps, yet it is when the north-east monsoon wavers over our region, sometimes generous but mostly not.

I walk alone in the cool damp of midnight from the rim of the cremation ground where I live to its midpoint, or the place closest to its middle. It is a long walk from the flat grounds of the cremation area to the mini-grove in the middle, one that eventually twines its way into a thick forest.

Yet it is a walk no villager from Venthila will undertake. The one time a villager Nagamuttu did, he said, he was inexorably bound to ill fate.

His version, recounted each time with beading perspiration, is this: “I had a feeling in my muscles and in my gut, I will be physically injured. I felt a real visceral fear of harm and a grisly nearness to evil. Worse still, for a long time, I could feel the weight of presences on my body, day, midday, dusk and night.”

I, however, have no escape from such shadows who come to life.

As the one person in the village with an ability to receive signals from spirits, see them and the visions they show and communicate it to whomever it is intended for, it is my obligation to arrive at the spot they have summoned me to.

So I walk on towards my revelation gateway, looking skyward from time to time.

I see a group of stars huddled in a circle and the moon at a distance away, struggling with her loneliness. They flash some light into the interiors of this graveyard, where the restless dead are known to roam, but not enough. A steady stream of floating clouds that fill the sky stop the diffusion.

My loose black robe merges with the blackness around with only its gentle rustling betraying my presence. It is purely by instinct that I carry on, past tall, silent trees that stand watchful guard and their silvery-blue leaves who look on me with patience. I feel the moistness of their trunks, laden as they are with the dampness of yesterday’s rain.

I listen intently, waiting for a signal above, the chirping of night crickets, the chittering of bats and the croaking of frogs. Soon a static buzz grows persistently in my inner world. I begin to feel shadowy presences gather at the edge of my consciousness. I knew they are there even if I cannot see them, gathering their forces toward a kind of definiteness.

Then in an instant, and without warning, the physical world around me alters. Winds whip the trees. They sway manically, their leaves howl. The stars above let out small screams of agony.

It is then I see shadows that are neither human nor beast who make odd wheeze sounds. I stand passively even as the pulse in my ears throb.

Up close, I see these beings have no uniform shape, no recognizable face and are different from one another. Yet each one of them has a misshapen tail, defiant, tense and crooked. And sour breaths.

These are visions that would be a rip in the fabric of reality for many. They would take a person to a different height of normal – paranormal. Even for me, used as I am to aberrant sights, these creatures are unusual, and their foretelling even more so. I am left awed by my own terror after they have spoken.

“Beware devils who sow distrust,
Beware dark demons of hate,
Beware soul-taking fire,
Beware people who are not who they seem.

If they uproot the earth,
If they burn the ground,
Venthila will fall
Unless the lost village of love is found.”

When it became clear twenty years ago I had the power of prophecy, my father said to me, “This gift has been particular only to the men of our community. This over centuries. Some men of our clan have come by this gift, while others have not. You have, and you are special as we have been left bereft of this soothsaying ability for some years.”

“Start your new role as the keeper of truths,” he said, “by losing your name, identity, home, possessions, and family. Now on, you will only be known as ‘Gudugudupandi’, or the carrier of the drum (gudugudu), belong to the cremation ground, not to us, and aloneness is to be your only way.”

My mother’s advice, far more prosaic, was to “smear the ash of the dead on my forehead, wear black clothes to draw in energy and light, and make my predictions, derived at night in the graveyard, the very next morning before the sun hastened towards the sky.”

I always begin my soothsaying at dawn, before the sap-stickiness of the day sets in, with my clackety-clack drumlet, and the words “Nalla Kaalam Porakkudu” (Await the birth of your good fortune).

I take a treacherous turn in cases that are not-so-simple. But I make sure to use words with liquid grace to take away the sting of my forecast and humbly accept rice, lentils, fruits and clothes in return.

Beating beads suspended on both sides of my hour-glass shaped drumlet, I have imparted news of newborns who will come to fame, jobs for many and unwaged existence for others, solace for amorous lovers, separateness for illicit couples whose passion carried them beyond all prudence, marriage for in-the-wait young, remarriage for a few, local court verdicts in land disputes, and even the drying of our river Vaigai.

It is not that I don’t agitate about whether I am right to tap into something primal in people for my revered status. After all, my new avatar is a far call from belonging to the lowest rung in the village’s caste ladder. On very many days, soul-froth bubbles within about toying with people’s uncertainties, a condition that has them both worried and intrigued about tomorrow’s dangers.

What settles my fluster, somewhat at least, is the fact that I have been handpicked for this role by our goddess Jakkamma. So I tell myself not to feel alone or wicked and bare up to barbs of a few. Of being called a “sorcerer full of folly and impertinence”, and handle their resentment towards my “dire mulling’s” and “making known their private truths”.

But this vision has caused great violence to my being and my beliefs.

For the first time, I am jolted by my legacy of “clear seeing”, “the faculty of supernormal sight”, “clairvoyance” or whatever term people call it by. I feel an unfamiliar sense of aloneness and abandonment settle within and hesitancy about my capability.

Venthila, my village, in Tamil Nadu’s Ramanathapuram district, is home to five hundred-odd homes. Strangers often tell us our “land looks plump with promise” and our river Vaigai “speaks of restfulness”.
This is perhaps because an aerial view shows up its lush lines of mango, papaya, jackfruit, coconut, banana, and palm trees, the mild meanderings of our river Vaigai, mostly infused with a yogic calm, and the many ponds where lotus are spread across silent, limpid waters.

We, who live nearer to the ground, know we live in a land where water is scarce but blood is easy.

Failed rains and crops, persistent drought, availability of jobs for only a fourth of our people, and the miasmic mix of caste rivalries and its resulting socio-economic tensions have been quicksand traps for our dissatisfaction.

It has let hate, distrust, intolerance and violence seep into us and our lives. And the tyrannical sun that beats down on our tiled and thatched homes with equal fury has seen many from these homes killed and the violence swirl outwards.

Understandably, visitors to our village are few, unless you count land surveyors who come in from the city and leave in haste, and new settlers are unheard of.

We residents have learned to live by our village seasons of hate and its oddities. But my vision says this ruin can’t continue.

How then should I tell people of the coming end? How do I convince them of the need for assimilation despite their varying intents? How can I make people see with the heart as I know that everything vital is invisible to the eyes? How can I restore my lost village of love?

I am in a state of ferment. The idea upon idea falls over the side of my brimming mind till one sits still. It is born of a simple yet potent thought. From my deep belief of a cosmos in which all beings exist in dependency, where the whole is contained in the part and the part in the whole. This is the secret I have learnt of the ancient Vedic scriptures, its touch of genius.

It is only the non-difference of ‘self’ and the ‘other’ that will allow for the oneness of the world, for the divine to shine in all things and all peoples. It is the only way tolerance and acceptance towards others, and compassion and reverence for all things are possible.

Our country came to freedom with this belief. Out of intense complexities, intense simplicities did emerge. For instance, the shortfalls of running a country and its business based on self-interest with little sympathy for the well-being of others showed up.

It is then absurd if I dream that my village can be made equable this way as well?

The end of my dream, of my hope, is too anarchic to contemplate. So I will daily risk small acts of courage for my lost village of love to re-emerge.

And my words, powerless as they may seem on others’ tongues, will become lucid, vigorous, powerful and convincing of my truth as I combine it in this way and that daily.

I will continue my foretelling till the time my people let me past their ‘thennais’ and into their hearts, and never again shun me as low born.

I will know then that Venthila has been restored.

Chitra Gopalakrishnan, a New Delhi-based journalist and a social development communications consultant, uses her ardor for writing, wing to wing, to break firewalls between nonfiction and fiction, narratology and psychoanalysis, marginalia and manuscript and tree-ism and capitalism.