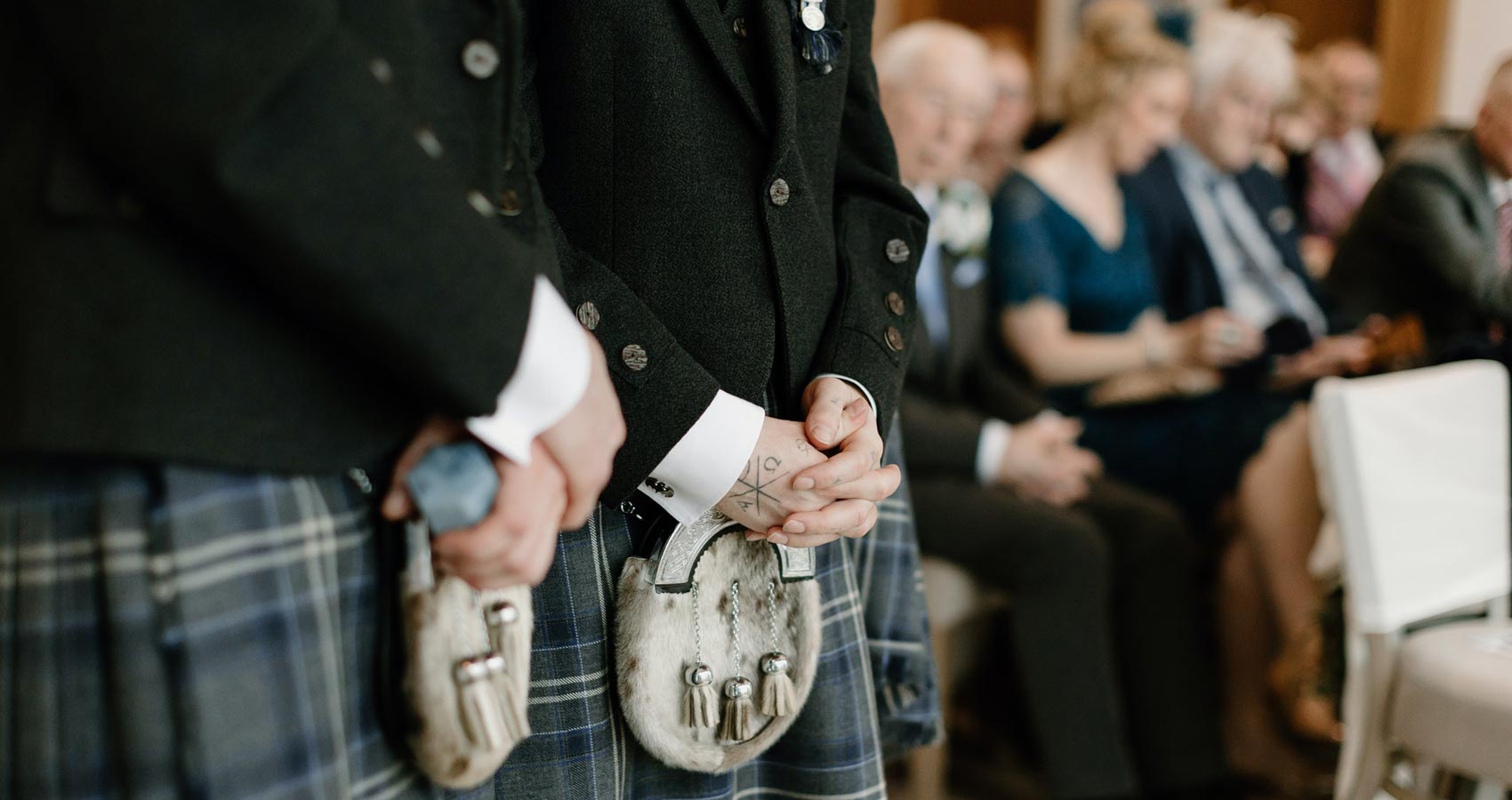 He arrived back in London for the wedding, swapping one urban area for another. Having teamed up with his brother who had come over from Ireland, they made their way to the church. The church was a place he had been many times before and was a small structure with the aroma of pine and incense penetrating the air. There were two ushers dressed in traditional Scottish attire, black waistcoats, jackets, a furry pouch, tartan kilts, long socks with a dagger tied to one leg and shiny black shoes.
‘The young man must be one of Martin’s friends,’ he thought to himself.
One of these gents approached the pair and addressed them politely in a strong Glaswegian accent
‘R yees with the brrides family or the grum?’
‘The brides’
‘Dis isle if ye plas!’
He held out his arm as if he were a policeman.
He found a place to sit together with his brother. Martin, the groom was sitting on the other side in the front row and kept looking back down the aisle. A young red-haired lady went to the front and studied some papers on the pulpit. Then after some time, the organ cleared its pipes and began to play. He turned around to see her, his cousin Mary being linked up the aisle by his uncle. He too was well kitted out as if he was going to the races. Brendan stooped forward as he made his way up, no doubt the brace he was wearing for his back making life uncomfortable. Oliver his cousin turned around and smiled a big beaming smile. Brendan was at odds to greet so many with a nod of the head, whilst Mary looked happy but a little embarrassed at having to share the spotlight with her father. Upon reaching the groom, he joined her and Brendan, took his place beside his wife in the pew. Mary looked at Martin and began trying to suppress a laugh arising within whilst her sister Monica’s mouth formed a polite introspective smile.

The wedding went as weddings go, they got married, had confetti thrown and then it was off to the club for the celebrations. The Polish club was a place where his uncle had arranged fundraising events for the mentally handicapped. The young man was familiar with the place having attended some of those before. The tables were laid, and many different noises were coming from the kitchen. Guests began to filter in, tables with names were studied and folk collapsed into chairs. The room was soon bubbling with conversation, fizzy drinks, and staff in white aprons rushing around. Then the priest Fr. Francie said grace. Following this, the only sound was that of the clash of knives and forks against porcelain.

After the dinner, dessert was served and here the conversation resumed where it left off with the tasty morsels providing new impetus. Then the cake was ceremoniously cut, and all laughed as the piece of cake on Mary’s fork crumbled and fell before it reached Martin’s gaping mouth. Tea and coffee led to a more self-reflecting conversation but that soon came to a halt when pints of the black stuff and bubbling beers were carried to tables. The children began to run around the hall and a sliding door was pulled back to reveal the other side, a large hall with chairs all around and a band standing on stage.

Music began and women and children were the first on the dance floor. The men standing or sitting with their drinks with dregs of tea and coffee at their elbows and the odd few crumbs on a plate. Having left his brother and greeted various relatives, he met his cousin Sinead. They stood at the intersection point between the hall and dining room. She seemed eager to chat and stared into his face as she spoke. He remembered her as a small girl, now she was fully grown. Her eyes beamed like two projectors, images of the countryside, the Atlantic coast and green hills onto a canvas in his mind. The freckles adorning her ripe red cheeks were like petals from a dandelion, landing on a sea of golden corn. His mind left the city and returned to Fanad, his father’s birthplace and the place where Sinead grew up. He felt the soft Atlantic air as he listened to her words. There was a steady flow of people between the two spaces, children skipped past, older children sauntered past and men behaving like children balancing pints in their hands also filed past.

It seemed they were standing at this threshold between two worlds for quite some time before Sinead’s father appeared.
‘Sinead, can you go over to your mother?’
Joachim looked at him before asking him how he was. He looked away as the young man answered before turning away. He was gone as stealthy as he arrived. The fellow decided to enter the dance hall that he had been facing during the conversation. Upon doing so it appeared to him like a giant yawn into which he was entering.

He passed Martin and the other tartan-clad men. They were sitting together, toasting to good fortune and throwing back glasses of golden liquid. It seemed that a lot of folks were at this stage either drunk or merry. Not long after the young man entered the men’s loos. Three young men were standing by the door. The Scottish usher was also there. They were having some sort of an altercation. It was a case of North versus South. The group then made its way outside into the lobby. Having done his business, he joined his brother who was about to leave. They stepped outside and heard a ruckus. The Scottish usher was now facing off the three young men in the car park below and his language had changed from that of in the church. It was full of swear words. His angry affront was met with a rebuff which sent him into a rage. He lunged forward throwing a head butt at his opponent. By now there was a tussle taking place with the kilt flying around like a sheet in a storm. Mary’s brother Joe rushed down the steps to try to break it up whilst his sister Monica cried for him to come back. Then Sean appeared out of nowhere. Sean was a red-haired young man from West Belfast who was a friend of his cousins. He had lost his mother at a young age and came to stay with his sister in London.
He bade them come with him.
They followed him like sheep, knowing he had grown up in the depth of the troubles in their own country, knowing that he knew how to avoid trouble, feeling that they were safe. They slept that night one on a sofa and the other on a couch. The next morning, Sean came in and asked?
‘R yees alright lads. Do yees need any fresh socks?’
A man who had lost his mother was now treating them like they were his own.