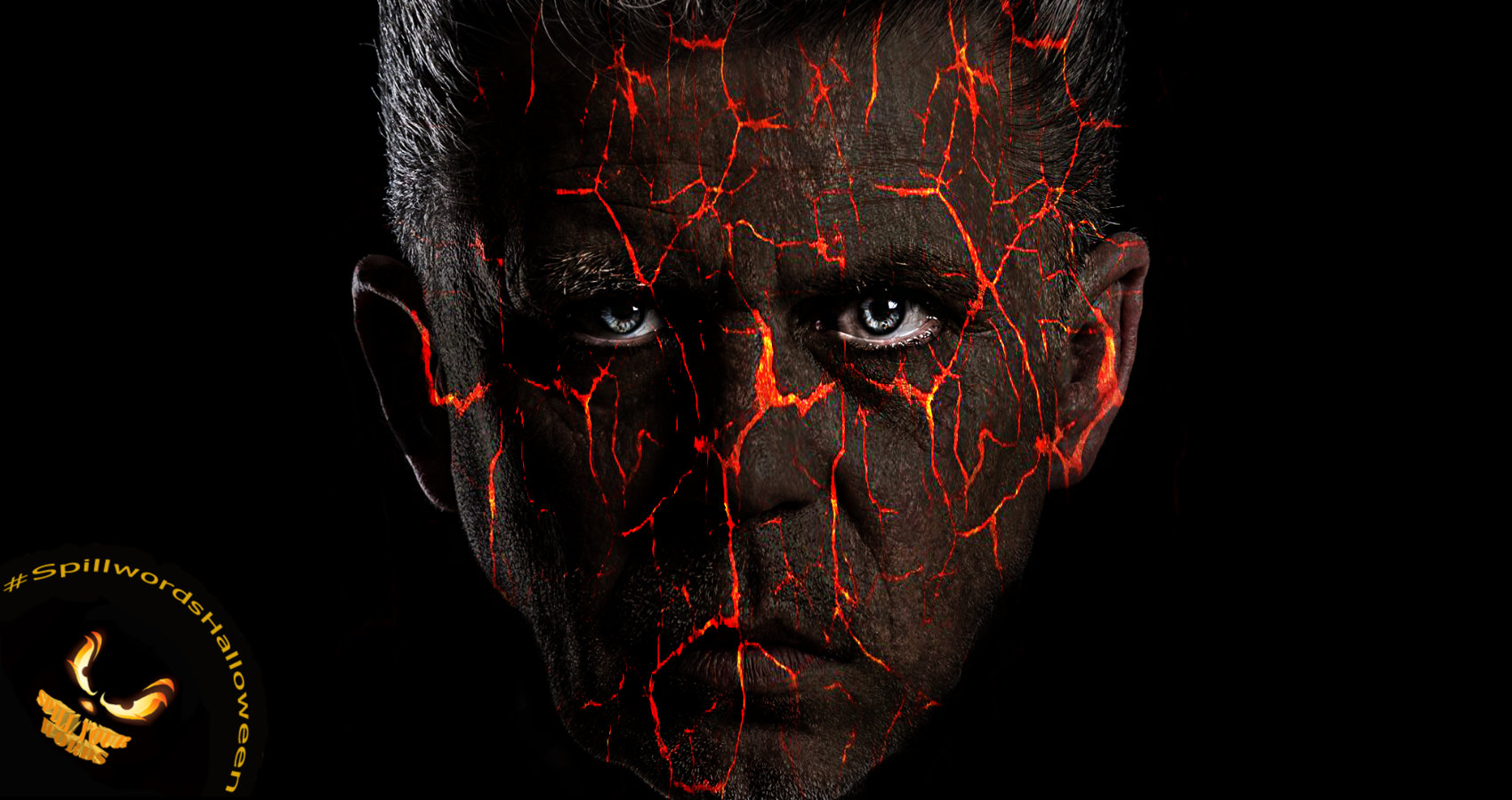 It’s In The Blood

It’s In the Blood

He stared at the blinking curser on the screen. Waited for words to show up on the page so a story could be told. A story that needed to be done before the end of the night. Not a very long story. Just a short Halloween story. How difficult could that be? He typed nonsense onto the page, incomplete sentences, test, test, and abc’s. He put the laptop on the coffee table and walked into the kitchen. “A drink of water will stir the cobwebs.” He grabbed a glass out of the cabinet and opened the fridge to get some cold, fresh, filtered water. He needed a new slant, a different idea, a sideways approach to a Halloween story. “Something to catch the reader and toss them into fear.” He laughed, sat back down, lifted his laptop and settled back into writing. But he just stared once more at the blinking cursor on the screen. He moved the cursor to the bottom right of the screen. Then to the left. Then to the right.

Words began to find the page. But, what were these words? Symbols appeared where letters should be. He typed fast, then faster as the screen filled with words, and words and symbols, and dots and dashes. “What is this?” He spoke, but his fingers could not stop typing nonsense. It was hypnotic. The rhythm of his typing and the shapes of the letters with pauses and dots took his breath. His cell phone rang. His hands jerked away from the keyboard. He was out of breath. He stared at the words, at the symbols, at the…. His mind stopped. He robotically answered the phone. His eyes would not leave the screen. He couldn’t stop looking at the strangeness he wrote. Or did he write it? “Who did this?”

He heard the voice on the phone saying his name repeatedly. “Jack… oh Jack. Hello Jack.” It was a deep voice that echoed through him. He looked at the phone to see the number that called him. It was not a number. It was a word, HALLOWEEN. “Who is this?”
“Jack, oh Jack, you are supposed to be outside, where are you Jack?”

A slow laugh turned into a growl, and a very deep voice whispered, “No Jack, you know who this is. Come out to play Jack. Tomorrow is Halloween. You are late.”

He shut off the phone and stared at the computer. He remembered a story of his great, great, great, long ago Grandfather Jack that supposedly had tricked the Devil a few times and was punished somehow. His mind couldn’t put complete thoughts together. He started to sweat. “He thinks I am that Jack?” He let out a loud laugh. “Bill has to be doing this.” The phone rang again with the number showing HALLOWEEN. “Ok Bill I know it is you…”

“Jack don’t make me come in there. Meet me at the bar. You owe me a drink…” There was a low hiss, then the phone went quiet with the world DEVIL scrolling across the screen.

He got on the internet to look up the history again of the Jack o’ lantern. It didn’t end well. The Jack long ago had tricked the Devil too many times, and after that, Jack died. God didn’t want him in Heaven and the Devil didn’t want him in hell. “He had to wander into the night with burned coal carried in a turnip.” He read out loud the legend. “Jack of the lantern became, “jack-o-lantern.” He stood and covered his face with his hands. “What is this! This is not real!” He looked at his phone. It turned red and he heard a low growl, “Jack hurry…”

He knew of the bar the Devil spoke of. His family had gone there often to toast to the old Jack that tricked the Devil. He turned and opened the drawer to his desk where he kept the old journal of his ancestor. He moved in a slow way, like a puppet. His reach was jerky and not smooth. Something was moving him, something in the room unseen, and something that smelled horrible.

A page opened and he was pushed to lean over it and read the scratched words on the yellowed paper. “The Devil will return to take another of the bloodline to hell, to pay for being tricked.” Jack was dropped hard onto the sofa. “It is real and I am Jack and the Devil wants me.” He had to find a way to trick him like his ancestor did. But how? The phone rang again but this time he didn’t have to answer it.

The speaker vibrated the voice through the room, “Jack, where are you.. come now…” Laughter ended the call.

He picked up his phone and lifted a silver cross that was in the drawer next to the journal and walked out of his home. He had no control of his walk. The night was beautiful with stars. Homes looked safe. He wished he was back in his home or would wake up from what had to be a nightmare. The sign of the bar was swinging erratically being pushed by a sudden burst of wind. The door opened on its own.

He saw a man sitting at the bar who turned and smiled, “You were almost too late Jack.”

Again, the echo of words and what felt like millions of years fell across his soul. He sat next to the man, a good-looking man wearing a white dress shirt, black slacks, and a black jacket. He didn’t look like the Devil. “Buy me a drink.”

Jack smiled nervously. “Look, Devil, we don’t have to do this. That was long ago…”

The Devil looked deeply into his eyes. “Oh yes we do…..”

Heat covered him with fear following close behind. “Wha … what do you want to drink,” he stuttered some and was shaking visibly. The bartender was not the usual one that worked there. His eyes glowed red with a smile that was crooked exhaling stench. Jack ordered the drink for the Devil. He felt the cross in his pocket. If he could lay it next to the Devil’s drink, he would be stuck at the bar. He moved quickly and dropped the silver cross between the Devil and his drink. The scream of pain exploded through Jack’s body knocking him off the bar stool. The Devil was stuck on the stool and was not happy.

“RELEASE ME NOW!” Flames came from around him and reached for Jack but couldn’t touch him.

The bartender vanished, the bar was empty. “Let’s make a deal?” Jack asked. Shaking, even his teeth chattered. The Devil gave him one option and one way to escape. Jack took the deal and removed the cross. He ran out of the bar, slammed into his house, and sat at the computer. He typed quickly, very quickly. His fingers had never moved so fast across the keyboard. Sweat began to burn his skin. He was running out of time. He finished what he wrote, copied it, pasted it into an email to all of his contacts, and pressed send.

He was dragged off of his chair, out the door, and into the night. The ground opened. He was pulled down through layers of time, pain, and suffering. He was going to hell. He grimaced and waited and hoped that soon someone would read the story. “The heat, oh the heat,’ he moaned as pain began to find every part of him. The Devil fell with him down through the layers of time.

“You made a bad deal little boy, little Jack.”

The heat slowed. Cool began to cover him. He rose away from the Devil, higher and higher up back through the layers of time and away from Hell.

The Devil screamed, “No! Not again!”

He submitted his Halloween story, yes, to all of his contacts. But he knew in those contacts were some publishers looking for a new story. The deal? Someone had to not only read his work but publish it. He wrote about the legend. He wrote about the Devil wanting him. He wrote all he could get out in the short time he had, and they loved it.

Gone and away, the Devil fell, leaving Jack alone. He had to write a story that captured a publisher or be in Hell for eternity. Jack would never look at the word published the same, ever again.