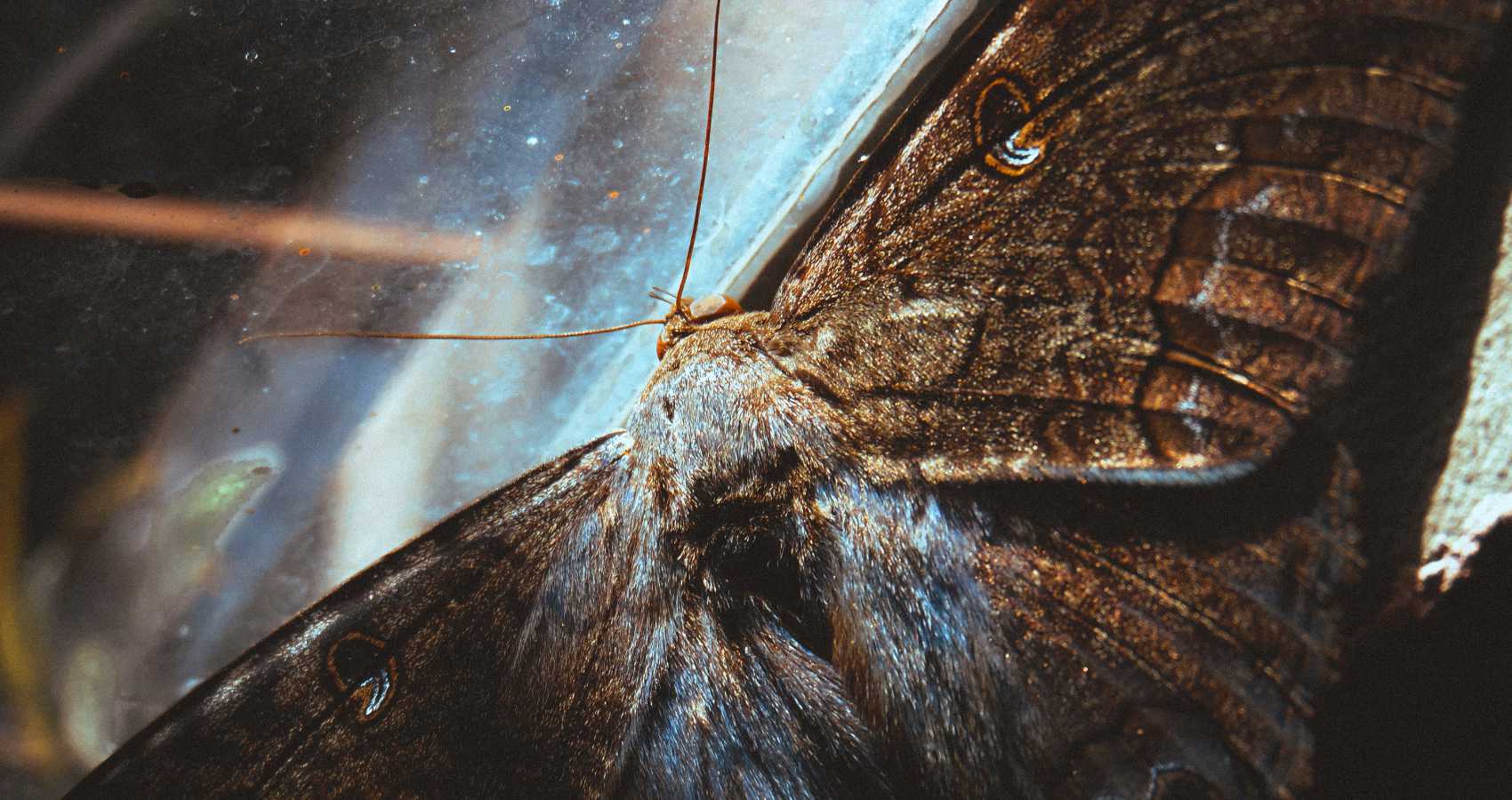 Learning From a Moth

Learning From a Moth

“Yet, because he was so small, and so simple a form of the energy that was rolling in at the open window… there was something marvelous as well as pathetic about him.”
—The Death of the Moth (1942), Virginia Woolf

Chitra was counting the intricate geometric patterns of the embroidery of her shawl and caressing the folds of her crinkled, long maxi dress that Hemant, her husband had brought for her from one of his sudden trips to India, their homeland. The evenings seemed to drag on endlessly these days in their small apartment in Jersey City where Tamie, her young Filipino caregiver would tend to her unfailingly every day, finish all her chores and carry her on her wheelchair to the balcony. From the third floor of the apartment, the contours of the sky, the children biking on the sidewalks, the lone birch and maple trees danced in Chitra’s eyes like a floating landscape. It was a still, yet provocative scene, much like the scene of early fall that Virginia Woolf had documented in her essay, describing the portrayal as ‘mild, benignant, yet with a keener breath’, something that she had learnt in her American Lit class lecture more than three decades back, with her only son Harish, or Harry in her womb.

She absorbed the scene from the balcony, just like she did every evening. As the sky would get dark and dense, the sound of night birds and insects would converge with that of the bell at the door. Tamie would open the door for Hemant and he would unfailingly ask:
“How did Chitra do today? Everything fine?”
“She’s improved a bit today…learning to do better every day!” She would reply.

Like the moth in Woolf’s essay, Chitra was still clinging on to her dance of life, settling her fragile body in visible corners of the home and in spite of being a ‘queer spectacle’ in her accomplice for five years, the wheelchair, sucked on the nectar of life, holding on to a legacy of learning. The nerves in the lower part of her body had dried up, and no therapy or surgery that they had tried for her worked well enough to make her stand, robust and strong.
Some days back, guided by a whim, she had writhed in pain and wished the girl had replied: “She just left us a while ago, couldn’t make it.”

She wanted a change of scene, a closure, like the last part of the essay where the moth’s struggle was over. But she was a human, a child of the divine design of destiny, and the strange stillness of her existence was yet another lesson in acceptance. Sometimes, her whole body would moan in excruciating pain, and after a while, those steroid shots in her loins, followed by the tranquilizers helped her lay down in her bed and slowly, gradually, let her fade into the realm of sleep.

Some days, the morning would start with Harry’s phone call, asking about his mommy. Some days the video calls from Harry all the way from California would wake her up from her delirium as he would show his mommy the dance steps he had taught his little daughter, their only grandchild. Yes, Harry was blessed with robust legs and feet that twirled and swirled on the floor, creating magic and an enigma of their own, just like his mommy, when she took her dance classes ages back. And today, those legs and feet had been her greatest impediment, a living, breathing curse…

She turned her intent gaze from the sky getting darker to the interiors of the room adjacent to the balcony. The visual landscape was getting blurry in her eyes now, and the minute movements of Tamie, her caregiver in that room were gaining momentum, the way she was folding Chitra’s clothes, wiping away the dirt and grime from their living space. This young girl had been a silent accomplice in all these sedentary years when Chitra had been pushing her way through this inevitable darkness.

At night, when Hemant came up to her and complained that she didn’t even touch the cup of herbal tea that Tamie had made for her in the evening, she didn’t answer. Perhaps reflecting on the small nitty-gritties of her daily life had been somewhat obsolete now. Perhaps attaining a closure had been inevitable.

Hemant would often frown, and ask: “What happened to you, my dear? Are you feeling low for some reason? What are you thinking, just tell me!”

Some other days, he would suggest: “Let us give a call to Harry and plan something for the upcoming Christmas holidays. What about taking you to your hometown in Orissa? Or, wait…what about us both visiting Harry and our grandchild in California?”

His face would gleam in childlike excitement, thinking of all such impossible agendas, while Chitra would feign a smile with a lot of effort. How Hemant still longed to drench her being with the tiniest possibilities of happiness, yet in Chitra’s own private universe of consciousness, she was only a minuscule part of a huge vortex of darkness. Waiting for her end game, with resilience.

The early fall in New Jersey had brought in its share of frost and cold, drizzling rain, freezing raindrops were perched on their balcony. Once, their young bodies had soaked in all of it like a delightful autumn sonata. But now, Hemant was wheeling her weather-beaten body back to their living room with his old, frostbitten hands. Chitra came back inside the room, and glanced at the plush sofa, the fancy pot with the indoor plant, the center table and the bookshelves filled with books, her ardent soul reaching beyond the confines of the physical space, far away in the hilly terrains of Daringbari, Orissa, the dense forests and the serpentine ally that led to her childhood home surrounded by pines, eucalyptus trees. She could feel the tug and pull of remembrance of those idyllic days when the shades of those trees soothed her senses, lulled her to sleep…so, so many years back, yet so vivid in her memory.

In all these years, her memories have been the only constant cocoon with which she had wrapped her fragile self.

“In literary studies, we tend to be moved by visual images and their layers of meaning…it’s all a response of our emotive, thoughtful minds.” A voice from long back, from the deep recesses of her memory reverberates around her silently, the voice of her English professor who had taught her the nuances of essays and stories more than three decades ago.
And moved she was, indeed, as her eyes fell on a small, insignificant painting on the wall, that of a moth transforming to a butterfly that Harry has drawn during his middle school days. She looked with moist eyes at the intricately crafted feathery antennae of the creature, its wings converging with the rhythm and flight of the butterfly, the crepuscular being, more sturdy and hard-built than the moth.

“Mommy, here’s your Mother’s Day gift!”
Harry’s voice came swimming back the tides of time. He was well aware that his mom loved everything which was Mother Nature’s gift, and so he had presented her his art, a celebration of the mystical gift of transformation. He was merely a child, uninitiated and pure, unaware of the momentous flight of struggle of the minuscule moth.

Since that day, the painting stayed with them, a banal reminder of her own self at the edge of survival, now that she looked at it again. How would she ever tell her husband or her son how a vital part of her had died long back? What was still living in this small apartment was only a semblance of her reality, struggling to fit into the paradigms of existence.

Her dainty legs which jumped in the hills of her girlhood days, and danced in the river banks of yore had turned numb, washed away by the tides of time. A lump of nameless pain was trying to push through her heart, as her feet trembled. She gripped both sides of the wheelchair tight with her hands, and tried calling Tamie. She pointed fingers at the part of the wall where the painting stood, a bit slanted, and tried uttering something, but her eyes closed, with only an empty groan.

“Cerebral stroke, a massive one…” The doctor had announced.

A day later, when Chitra’s dead, lifeless body was taken away for her cremation rites, the painting on the wall dashed on the ground, with splinters of its glass frame all over the floor. Harry decided to frame it yet again and take it back to California, carrying the vestiges of his sacred childhood memory.
Little did he know that his mother had learned the lesson of her literature class damn well, making a wholesome effort against an oncoming doom, fluttering her whole being like the moth one last time before she spelled the ‘unmistakable tokens of death’.