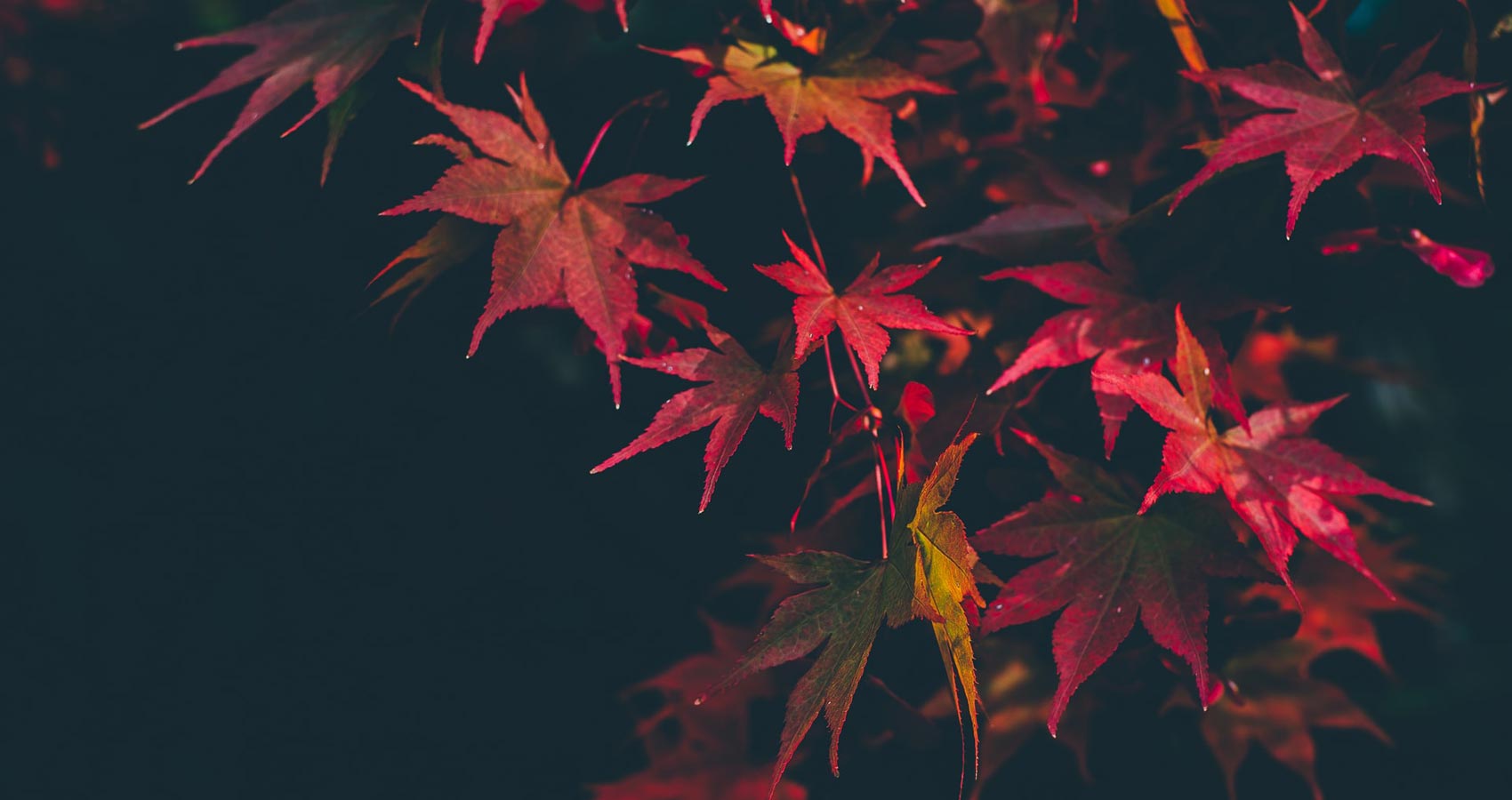 a poem by Robert Frost

Her teacher’s certainty it must be Mabel
Made Maple first take notice of her name.
She asked her father and he told her, ‘Maple—
Maple is right.’
‘But teacher told the school
There’s no such name.’
‘Teachers don’t know as much
As fathers about children, you tell teacher.
You tell her that it’s M-A-P-L-E.
You ask her if she knows a maple tree.
Well, you were named after a maple tree.
Your mother named you. You and she just saw
Each other in passing in the room upstairs,
One coming this way into life, and one
Going the other out of life—you know?
So you can’t have much recollection of her.
She had been having a long look at you.
She put her finger in your cheek so hard
It must have made your dimple there, and said,
‘Maple.’ I said it too: ‘Yes, for her name.’
She nodded. So we’re sure there’s no mistake.
I don’t know what she wanted it to mean,
But it seems like some word she left to bid you
Be a good girl—be like a maple tree.
How like a maple tree’s for us to guess.
Or for a little girl to guess sometime.
Not now—at least I shouldn’t try too hard now.
By and by I will tell you all I know
About the different trees, and something, too,
About your mother that perhaps may help.’
Dangerous self-arousing words to sow.
Luckily all she wanted of her name then
Was to rebuke her teacher with it next day,
And give the teacher a scare as from her father.
Anything further had been wasted on her,
Or so he tried to think to avoid blame.
She would forget it. She all but forgot it.
What he sowed with her slept so long a sleep,
And came so near death in the dark of years,
That when it woke and came to life again
The flower was different from the parent seed.
It carne back vaguely at the glass one day,
As she stood saying her name over aloud,
Striking it gently across her lowered eyes
To make it go well with the way she looked.
What was it about her name? Its strangeness lay
In having too much meaning. Other names,
As Lesley, Carol, Irma, Marjorie,
Signified nothing. Rose could have a meaning,
But hadn’t as it went. (She knew a Rose.)
This difference from other names it was
Made people notice it—and notice her.
(They either noticed it, or got it wrong.)
Her problem was to find out what it asked
In dress or manner of the girl who bore it.
If she could form some notion of her mother—
What she bad thought was lovely, and what good.
This was her mother’s childhood home;
The house one story high in front, three stories
On the end it presented to the road.
(The arrangement made a pleasant sunny cellar.)
Her mother’s bedroom was her father’s still,
Where she could watch her mother’s picture fading.
Once she found for a bookmark in the Bible
A maple leaf she thought must have been laid
In wait for her there. She read every word
Of the two pages it was pressed between,
As if it was her mother speaking to her.
But forgot to put the leaf back in closing
And lost the place never to read again.
She was sure, though, there had been nothing in it.

So she looked for herself, as everyone
Looks for himself, more or less outwardly.
And her self-seeking, fitful though it was,
May still have been what led her on to read,
And think a little, and get some city schooling.
She learned shorthand, whatever shorthand may
Have had to do with it- she sometimes wondered.
So, till she found herself in a strange place
For the name Maple to have brought her to,
Taking dictation on a paper pad
And, in the pauses when she raised her eyes,
Watching out of a nineteenth story window
An airship laboring with unshiplike motion
And a vague all-disturbing roar above the river
Beyond the highest city built with hands.
Someone was saying in such natural tones
She almost wrote the words down on her knee,
‘Do you know you remind me of a tree-
A maple tree?’

‘Because my name is Maple?’
‘Isn’t it Mabel? I thought it was Mabel.’

‘No doubt you’ve heard the office call me Mabel.
I have to let them call me what they like.’

They were both stirred that he should have divined
Without the name her personal mystery.
It made it seem as if there must be something
She must have missed herself. So they were married,
And took the fancy home with them to live by.

They went on pilgrimage once to her father’s
(The house one story high in front, three stories
On the side it presented to the road)
To see if there was not some special tree
She might have overlooked. They could find none,
Not so much as a single tree for shade,
Let alone grove of trees for sugar orchard.
She told him of the bookmark maple leaf
In the big Bible, and all she remembered
of the place marked with it—’Wave offering,
Something about wave offering, it said.’

‘You’ve never asked your father outright, have you?’

‘I have, and been Put off sometime, I think.’
(This was her faded memory of the way
Once long ago her father had put himself off.)
‘Because no telling but it may have been
Something between your father and your mother
Not meant for us at all.’
‘Not meant for me?
Where would the fairness be in giving me
A name to carry for life and never know
The secret of?’
‘And then it may have been
Something a father couldn’t tell a daughter
As well as could a mother. And again
It may have been their one lapse into fancy
‘Twould be too bad to make him sorry for
By bringing it up to him when be was too old.
Your father feels us round him with our questing,
And holds us off unnecessarily,
As if he didn’t know what little thing
Might lead us on to a discovery.
It was as personal as be could be
About the way he saw it was with you
To say your mother, bad she lived, would be
As far again as from being born to bearing.’

‘Just one look more with what you say in mind,
And I give up’; which last look came to nothing.
But though they now gave up the search forever,
They clung to what one had seen in the other
By inspiration. It proved there was something.
They kept their thoughts away from when the maples
Stood uniform in buckets, and the steam
Of sap and snow rolled off the sugarhouse.
When they made her related to the maples,
It was the tree the autumn fire ran through
And swept of leathern leaves, but left the bark
Unscorched, unblackened, even, by any smoke.
They always took their holidays in autumn.
Once they came on a maple in a glade,
Standing alone with smooth arms lifted up,
And every leaf of foliage she’d worn
Laid scarlet and pale pink about her feet.
But its age kept them from considering this one.
Twenty-five years ago at Maple’s naming
It hardly could have been a two-leaved seedling
The next cow might have licked up out at pasture.
Could it have been another maple like it?
They hovered for a moment near discovery,
Figurative enough to see the symbol,
But lacking faith in anything to mean
The same at different times to different people.
Perhaps a filial diffidence partly kept them
From thinking it could be a thing so bridal.
And anyway it came too late for Maple.
She used her hands to cover up her eyes.

‘We would not see the secret if we could now:
We are not looking for it any more.’

Thus had a name with meaning, given in death,
Made a girl’s marriage, and ruled in her life.
No matter that the meaning was not clear.
A name with meaning could bring up a child,
Taking the child out of the parents’ hands.
Better a meaningless name, I should say,
As leaving more to nature and happy chance.
Name children some names and see what you do.