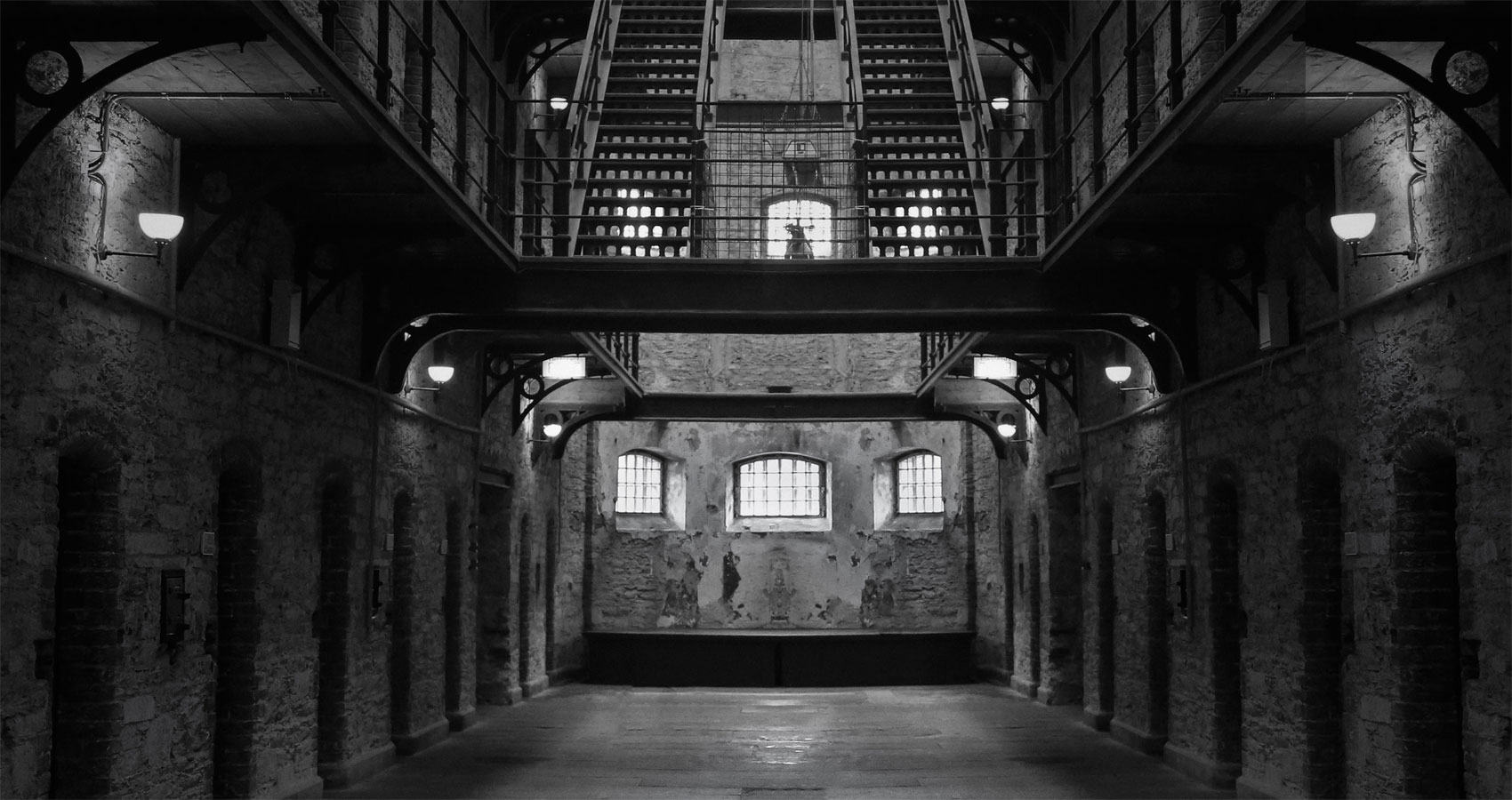 One Hundred And Three

One Hundred and Three

a poem by Henry Lawson

With the frame of a man, and the face of a boy, and a manner strangely wild,
And the great, wide, wondering, innocent eyes of a silent-suffering child;
With his hideous dress and his heavy boots, he drags to Eternity—
And the Warder says, in a softened tone: ‘Keep step, One Hundred and Three.’

They shut a man in the four-by-eight, with a six-inch slit for air,
Twenty-three hours of the twenty-four, to brood on his virtues there.
And the dead stone walls and the iron door close in as an iron band
On eyes that followed the distant haze far out on the level land.

Bread and water and hominy, and a scrag of meat and a spud,
A Bible and thin flat book of rules, to cool a strong man’s blood;
They take the spoon from the cell at night—and a stranger might think it odd;
But a man might sharpen it on the floor, and go to his own Great God.

A man came out at exercise time from one of the cells to-day:
’Twas the ghastly spectre of one I knew, and I thought he was far away;
We dared not speak, but he signed ‘Farewell—fare—well,’ and I knew by this
And the number stamped on his clothes (not sewn) that a heavy sentence was his.

Where five men do the work of a boy, with warders not to see,
It is sad and bad and uselessly mad, it is ugly as it can be,
From the flower-beds laid to fit the gaol, in circle and line absurd,
To the gilded weathercock on the church, agape like a strangled bird.

The great, round church with its volume of sound, where we dare not turn our eyes—
They take us there from our separate hells to sing of Paradise.
In all the creeds there is hope and doubt, but of this there is no doubt:
That starving prisoners faint in church, and the warders carry them out.

They double-lock at four o’clock and the warders leave their keys,
And the Governor strolls with a friend at eve through his stone conservatories;
Their window slits are like idiot mouths with square stone chins adrop,
And the weather-stains for the dribble, and the dead flat foreheads atop.

No light save the lights in the yard beneath the clustering lights of the Lord—
And the lights turned in to the window slits of the Observation Ward.
(They eat their meat with their fingers there in a madness starved and dull—
Oh! the padded cells and the O—b—s are nearly always full.)

Rules, regulations—red-tape and rules; all and alike they bind:
Under ‘separate treatment ’ place the deaf; in the dark cell shut the blind!
And somewhere down in his sandstone tomb, with never a word to save,
One Hundred and Three is keeping step, as he’ll keep it to his grave.

The press is printing its smug, smug lies, and paying its shameful debt—
It speaks of the comforts that prisoners have, and ‘holidays’ prisoners get.
The visitors come with their smug, smug smiles through the gaol on a working day,
And the public hears with its large, large ears what authorities have to say.

They lay their fingers on well-hosed walls, and they tread on the polished floor;
They peep in the generous shining cans with their ration Number Four.
And the visitors go with their smug, smug smiles; the reporters’ work is done;
Stand up! my men, who have done your time on ration Number One!

Ay! clang the spoon on the iron floor, and shove in the bread with your toe,
And shut with a bang the iron door, and clank the bolt—just so,
With an ignorant oath for a last good-night—or the voice of a filthy thought.
By the Gipsy Blood you have caught a man you’ll be sorry that ever you caught.

I’ve seen the remand-yard men go out, by the subway out of the yard—
And I’ve seen them come in with a foolish grin and a sentence of Three Years Hard.
They send a half-starved man to the court, where the hearts of men they carve—
Then feed him up in the hospital to give him the strength to starve.

You get the gaol-dust in your throat, in your skin the dead gaol-white;
You get the gaol-whine in your voice and in every letter you write.
And in your eyes comes the bright gaol-light—not the glare of the world’s distraught,
Not the hunted look, nor the guilty look, but the awful look of the Caught.

There was one I met—’twas a mate of mine—in a gaol that is known to us;
He died—and they said it was ‘heart disease’; but he died for want of a truss.
I’ve knelt at the head of the pallid dead, where the living dead were we,
And I’ve closed the yielding lids with my thumbs—(Keep step, One Hundred and Three!)

A criminal face is rare in gaol, where all things else are ripe—
It is higher up in the social scale that you’ll find the criminal type.
But the kindness of man to man is great when penned in a sandstone pen—
The public call us the ‘criminal class,’ but the warders call us ‘the men.’

The brute is a brute, and a kind man kind, and the strong heart does not fail—
A crawler’s a crawler everywhere, but a man is a man in gaol!
For forced ‘desertion’ or drunkenness, or a law’s illegal debt,
While never a man who was a man was ‘reformed’ by punishment yet.

The champagne lady comes home from the course in charge of the criminal swell—
They carry her in from the motor car to the lift in the Grand Hotel.
But armed with the savage Habituals Act they are waiting for you and me,
And the drums, they are beating loud and near. (Keep step, One Hundred and Three!)

The clever scoundrels are all outside, and the moneyless mugs in gaol—
Men do twelve months for a mad wife’s lies or Life for a strumpet’s tale.
If the people knew what the warders know, and felt as the prisoners feel—
If the people knew, they would storm their gaols as they stormed the old Bastile.

And the cackling, screaming half-human hens who were never mothers nor wives
Would send their sisters to such a hell for the term of their natural lives,
Where laws are made in a Female Fit in the Land of the Crazy Fad,
And drunkards in judgment on drunkards sit and the mad condemn the mad.

The High Church service swells and swells where the tinted Christs look down—
It is easy to see who is weary and faint and weareth the thorny crown.
There are swift-made signs that are not to God, and they march us Hellward then.
It is hard to believe that we knelt as boys to ‘for ever and ever, Amen. ’

Warders and prisoners all alike in a dead rot dry and slow—
The author must not write for his own, and the tailor must not sew.
The billet-bound officers dare not speak and discharged men dare not tell
Though many and many an innocent man must brood in this barren hell.

We are most of us criminal, most of us mad, and we do what we can do.
(Remember the Observation Ward and Number Forty-Two.)
There are eyes that see through stone and iron, though the rest of the world be blind—
We are prisoners all in God’s Great Gaol, but the Governor, He is kind.

They crave for sunlight, they crave for meat, they crave for the might-have-been,
But the cruellest thing in the walls of a gaol is the craving for nicotine.
Yet the spirit of Christ is everywhere where the heart of a man can dwell,
It comes like tobacco in prison—or like news to the separate cell.

. They have smuggled him out to the Hospital with no one to tell the tale,
But it’s little the doctors and nurses can do for the patient from Starvinghurst Gaol.
He cannot swallow the food they bring, for a gaol-starved man is he,
And the blanket and screen are ready to draw—(Keep step, One Hundred and Three!)

‘What were you doing, One Hundred and Three?’ and the answer is ‘Three years hard,
And a month to go’—and the whisper is low: ‘There’s the moonlight—out in the yard.’
The drums, they are beating far and low, and the footstep’s light and free,
And the angels are whispering over his bed: ‘Keep step, One Hundred and Three!’