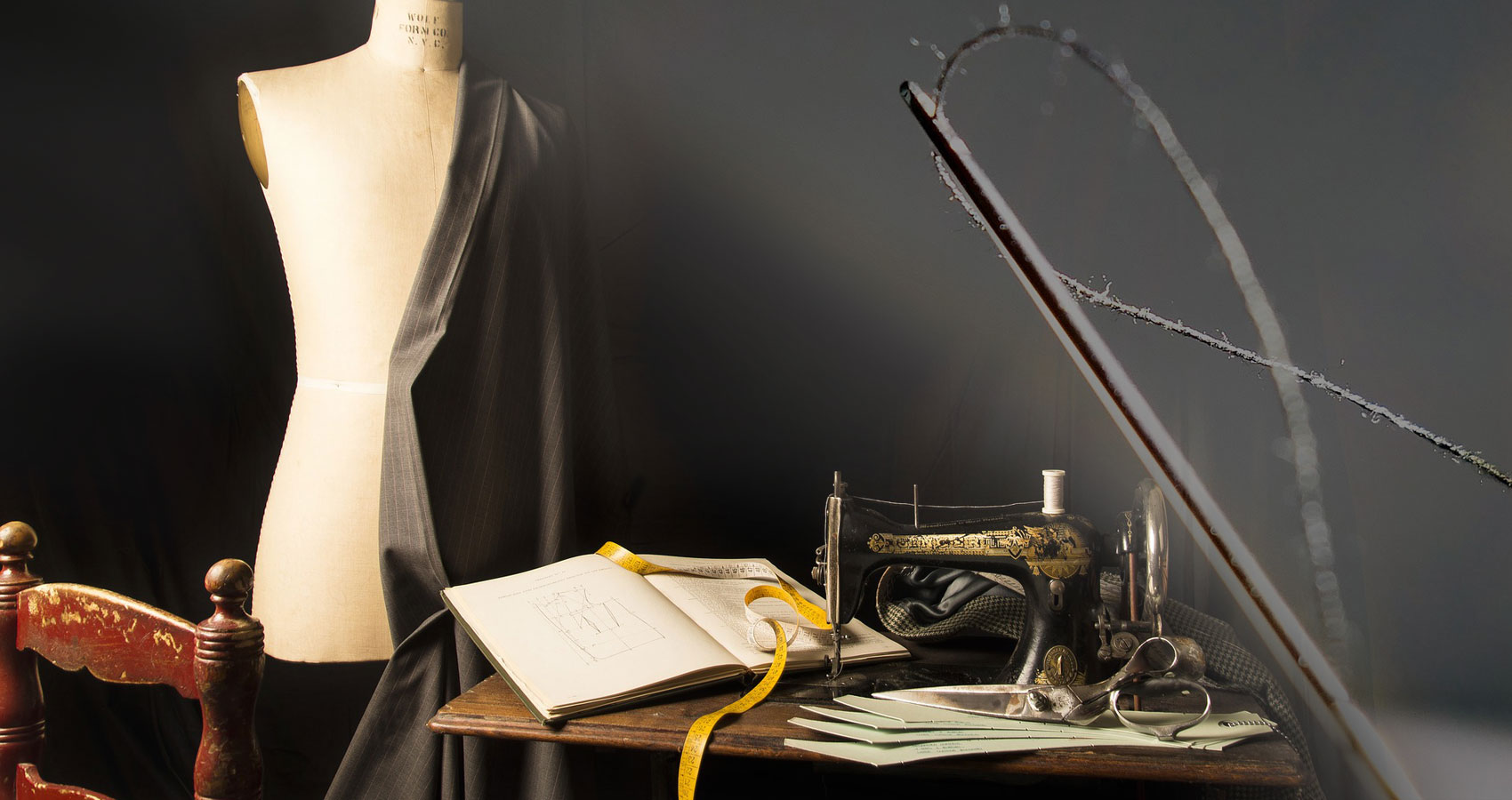 Conrad Cutter, the town tailor, stood brushing imaginary bits of dust from the shoulders of the herringbone tweed he’d painstakingly sewn by hand with his golden needle.
“This jacket, it’s perfect,” Pennington murmured as he studied himself in the three-way mirror. He reached into his trouser pocket and pulled out a hefty tip. With a smile he slapped a hundred dollar bill into the grateful hand of Conrad Cutter, locking it in with a firm handshake.
Afterward, Conrad would have liked to rest but he stayed up all night working on Veera Kronski’s long-sleeved, taffeta gown. The sun was high in the sky by the time Veera arrived with a flourish. She exited her attire and slipped rather ungracefully into the hand-sewn gown. “This right sleeve is too short. The bone of my wrist is sticking out. You shall fix it promptly.”
Conrad glared.
“Yes?” Veera met Conrad’s scowl.
“Yes,” Conrad replied as he turned away. Veera wrenched the gown from her body, hastily dressed and left.
That night Conrad altered the sleeve using the brass needle he kept in a filigree box, the needle he used for special alterations. He awoke after sleeping soundly and sipped at his morning coffee while perusing the morning paper. The headline in the Daily News read, “Gruesome Chandelier Accident at Kronski Castle.” The article reported that during dinner, the Kronski cat leapt from the infamous Schonbek chandelier. The chandelier rocked wildly, broke loose, and crashed into the Kronski’s Kadzinsky abstract painting, Samurai Sword in Bright Red. The glass shattered, sending huge shards flying. A startled Mrs. Kronski attempted to set down her fork only to realize her right hand had been cleanly severed just above the wrist. Mrs. Kronski was rushed to Mount Mercy Hospital.
Just then Conrad’s doorbell rang. He rose to admit Emmaline Jung. “Conrad, dear, do you by any chance have those canary palazzo pants hemmed? The country club has changed the date and their bazaar is tomorrow!”
“Why yes, Emmaline. Try them on and tell me what you think.”
“Oh Conrad, you’ve outdone yourself. The flow along the length of each leg is impeccable,” she said pirouetting in front of the three-way mirror as she reached into her purse.
“Thank you, Emmaline.” Conrad smiled as he accepted her considerable payment.
At half-past six that evening Kangas Pickhard charged up Conrad’s steps and pounded on the door. “Conrad, last week you altered my trousers. After I picked them up I noticed the zipper is malfunctioning. I cannot go about with a zipper like this. What would the ladies think? I demand you fix it by the time I return tomorrow!”
“Of course,” Conrad answered. “I’ll have them ready for you in the morning.” Conrad quietly closed the door and went to sit in his sewing chair. He crossed one leg over the other and reached for the brass needle inside the filigree box.