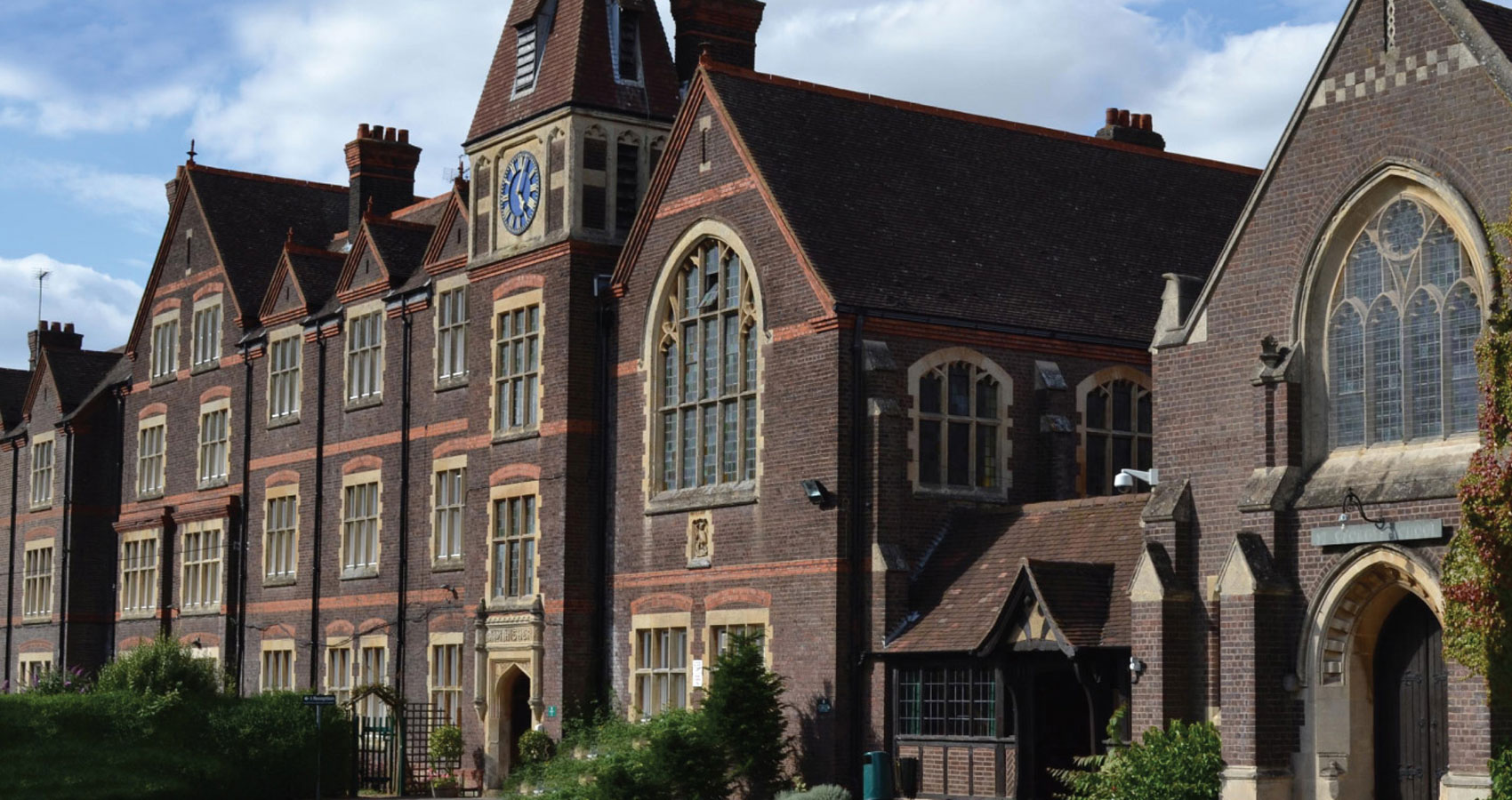 At night, St George’s seemed haunted. It became disquieting whenever the thousands of children were no longer there, a place of echoes. The lines of desks looked unnatural without children sitting at them scribbling away. The corridors seemed infinite without little children running through them. Even the caretaker hated to go in there after 10, when darkness seemed to consume it. But, it was considered one of the best schools in town, no matter its nightly strangeness.

When the government, in its wisdom, decided to close the school down one year, things changed. The school became malevolent. St. George’s was left to gather weeds, moss and lichen climbed its walls, filled its offices, corridors and classrooms. The windows cracked. Glass covered the classrooms. The paint peeled off the walls and the doors swung aimlessly on rusting hinges.

Neither the government nor the local Education Authority accepted such a large building gathering dust. The land on which it stood was after all of immense value, and could be utilized profitably for private housing or even a shopping mall. To that end, inspectors were sent in to estimate how much could be made from St. George’s.

A party of five, all distinguished in their slightly differing fields, converged on the school at 11 am, loaded down with survey instruments and laptops. As they knew each other, conversation between them was instantaneous, devoted at first to wives, husbands, siblings and children. It was a small town.

After drinking coffee, stuffing themselves with sandwiches and cakes, they set off around the school, splitting up into two groups for efficiency. They planned to complete the job in a day. Three went up the stairs to measure the classrooms there, checking electric wires where possible and walls and ceilings. Two, middle-aged women who had attended the school together as boisterous five year olds, began on the ground floor. They each enjoyed a cigarette before checking their instruments and setting out.

Although it was a chilly morning, shafts of intense white sunlight poured through several of the long, broken windows giving the floating dust an eerie substance. Walking down the corridors, they viewed the dilapidation with shared sentimentality, visualizing their younger selves smiling, jumping and playing tag. Every so often, as they walked past, a classroom door swung open in the snaking draughts that suddenly emerged from the surrounding walls. The school was gradually pulling together all the information that had passed through it for a hundred years. Endlessly repeated sums and alphabets. Its floor boards groaned: ‘one and one is two, two and two is four.’ The names of countries, rivers, cities. The history of wars, battles, slavery and kings fluttered through the bleak rooms.

The surveyors craned their ears to catch the ghostly creaking words. Looking at one another, they shook their shoulders and went about their business. The two old friends peered into each room, noting measurements and condition. As they did so, they grew increasingly disorientated by the classroom numbers in each part of the building. Where they expected 20, they found 200. As children they thought the school was enormous, but that was when they were tiny children. The corridors became seemingly endless. The building appeared to be expanding. The two women looked at each other in bewilderment. A jumble of barely coherent words poured forth out of the boards, furniture and walls surrounding them. On either side, the doors swung wide open exposing purplish darkness, which stretched out towards them. In seconds they were engulfed.

Although the old school adored human flesh, ripping it off them, their eyes widening in horror, and enjoyed sucking the goodness from the bones, it was their brains it craved. It nibbled at them for several minutes, taking in every thought and experience.

The school did not always enjoy eating people as its ingestion processes were slow. By then, it had eaten five people, the two middle-aged women, and three homeless men who came in out of the cold to sleep. After absorbing whatever knowledge the people had, their carcasses were deposited in the boiler room. It had yet to find an alternative way of disposing of them.

The remaining inspectors did not realize that they were missing two members until lunchtime. They spent the next hour searching everywhere for their colleagues. Now, the school rarely acquired proper sustenance. It was empty most of the time and had been for five years. The flood of thoughts it had long tapped into had dried up and all it was left with, in comparison, was a tiny raindrop or two. It was indeed slowly dying of thirst. Given its predicament, it began gobbling up the rest.

It was needless to say unusual for such a small town to have five people suddenly go missing. While one surveyor disappearing might have seemed acceptable, but five! It took several days before anyone thought of searching the school. It was pleased about that as it had still to fully digest its previous victims. The knowledge it acquired was coursing through its walls and floor boards even now. It was a truly wonderful feeling. It was almost as if the children were back.

A member of the local council entered the building with two young police officers a week later. They did not expect to find anything. It was the afternoon and already hot. The school stank of rat dropping and urine. Buoyant dust gathered in clouds drifting above their heads. Each noticed how much larger the school looked inside. The council member had never attended the school and so retained no feelings for the ruin. He saw only a dangerous building that required knocking down. Regularly, with a meaty hand, he wafted the stench from his nose.

“My God. Why wasn’t this place knocked down years ago. Its falling apart as it is.”

He could speak dismissively because he had gone to the better school on the other side of town. He had no sentimental connection here. He kicked at a discarded beer can.

“Left here by an old student no doubt.” He sneered.

The sound of the tin can bouncing over its floorboards put the school on edge. Besides which, it was hungry. The council member laughed. With the police officers, he began a slow search of the building. They tagged along reluctantly, unlike the council member visualizing their younger selves racing down the corridors. They were local boys and too had been pupils of St. George’s.

The school picked up the memories, delighting in the taste of eagerly remembered feelings of nostalgia and recoiling from the negative feelings of disdain that emanated from one of them. It felt their tread as the men explored its empty rooms.

“I’ve scheduled demolition for Tuesday. Not before time.” The Council member said.

The two policemen sighed. Each cast a regretful eye upon the crumbling structure surrounding them.

“Not before bloody time.” The civil servant murmured.

He particularly hated old Edwardian schools with their claustrophobic classrooms full of shadows and ghosts. He would be pleased to see its plaster gargoyles and grey walls pulled down. They continued, searching every floor.

“Nothing of course.” He pointed downwards with his pen. “We’ll look around in the basement, although god knows what’s down there.”

Quickly reconnoitering, he found the door to the boiler room. Unlike the other doors, it was locked. He kicked it and it opened. The smell was overwhelming. They flicked on the light. The three men carefully navigated the uncertain steps. The boiler room was in shadows. The smell was worrying. Searching, they found nothing untoward until the ever vigilant council member saw a pile of assorted junk in a corner. In his usual assured manner he approached it. His face fell when before him he saw bones and ripped and discarded clothing.

“Jesus”, said one of his companions, “there’s dozens of them. Dozens of bodies.”

The council member turned, shock etched into his pallid features. Within a moment, his mouth was jerked open in a scream as both his arms were ripped off. A policeman clutching his truncheon immediately lost his head. It twirled in the air, falling back face down. The second policeman had his heart ripped out. Blood shot into the schools many receptacles. Intestines were dragged out disappearing into the shadows. After eating the council member’s brain, the school felt nauseous. The man’s thoughts were of the school, cruel thoughts that filled it with fear. It shook. It felt its end. The brain carried memories of its end, even if the school didn’t fully understand what the word and idea meant. It had no concept of dying.

The next search team failed to investigate the basement and soon after wrecking balls were pounding the school’s sturdy walls. As windows caved in the school began to feel fear. Part by part it was ceasing to exist. Eventually, the roof shook and slowly slid downwards, crashing into the floors below. Doors snapped in two. Within the day, St George’s, to general sadness, no longer existed. The locals felt that their childhoods had gone with the school’s demise. Only the basement remained, now full of dust and bricks. Much diminished, the school was still cognizant. It still had thoughts and ideas. But isolated as it was, without contact now with the outside world, it grew increasingly mad. There it stayed underground, an innocuous bundle of grey brick, one old mangled boiler, encased in emptiness and shadows, waiting. It was greedy for knowledge like a true autodidact, desperate to gorge again on human brains.

I Am The Moon