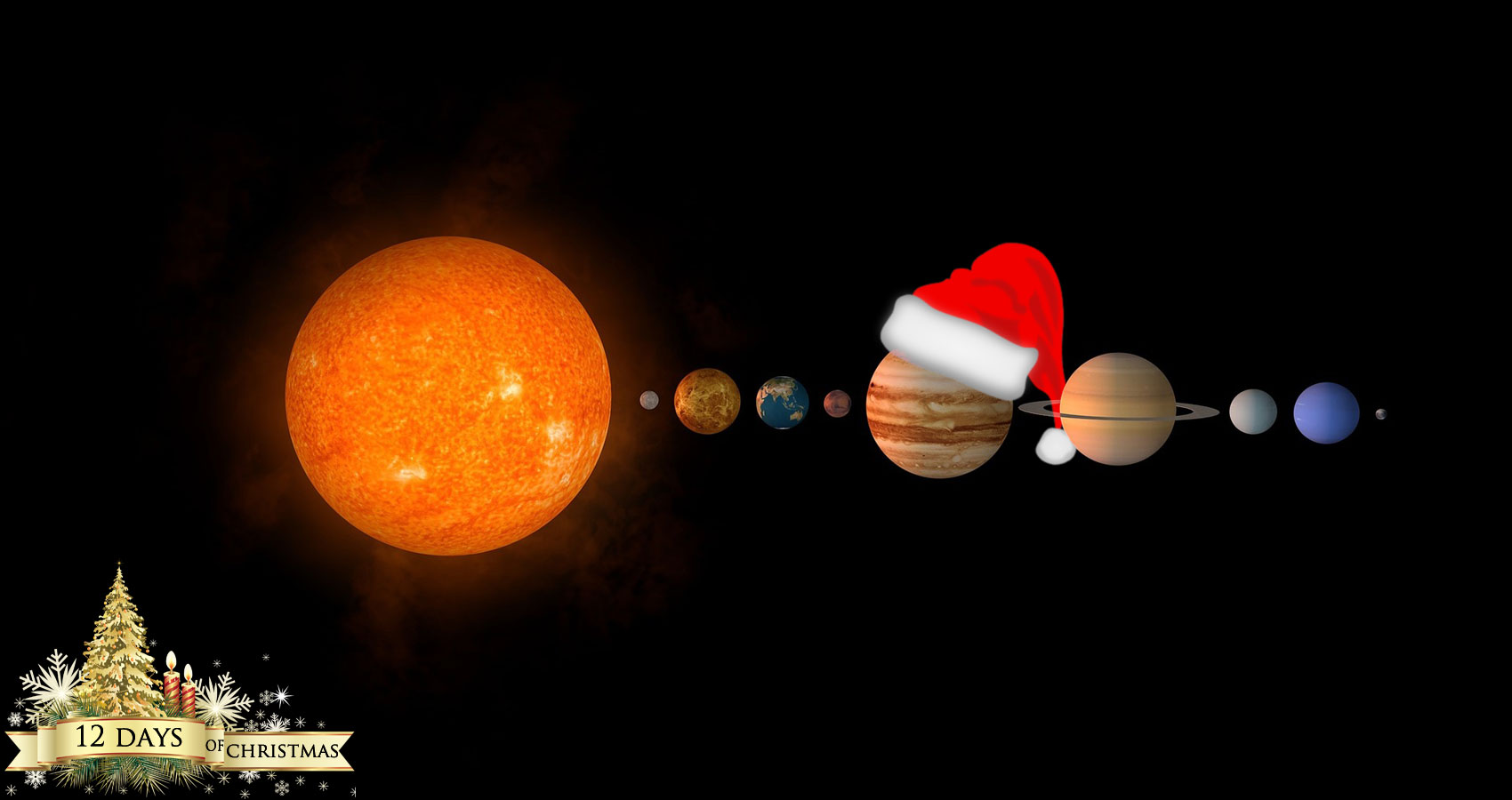 “Tell us professor just how often does this alignment business happen?” a young blonde reporter asked. She had a probing intensity that shocked even her. It was her first actual assignment, but one would never have guessed it by the way she conducted herself.

“Well miss,” Professor Vanderbilt began as he pulled away his chromium, wire rimmed glasses as if he were about to address a room filled with impatient students. “The chances of this ever happening again are, at best, infinitesimal. Einstein proclaimed that ‘God does not play dice with the universe!’ This arrangement of Jupiter’s moons, all in a row if you will, would be a long shot at any casino in Las Vegas!”

“But what does it all have to do with us here on Big Blue?” the woman pressed. “Layman’s lingo if you would please.”

“Okay, I’ll try,” Vanderbilt said as he grasped the podium just beneath the huge bouquet of microphones. “The giant Jupiter has a plethora of moons, large and small, some very close to it, and some far away, from the massive icy Ganymede to the tiny Leda. They are, each and all, captured in the great planet’s gravitational net. There are at least sixteen moons, at last count, orbiting her. That’s a lot of satellites young lady and if you have them all in alignment sandwiched between Earth, including the eclipsing Mars and our lonely old Moon, we might just have ourselves one heck of a ‘moving’ Christmas!”

“That’s not that far off sir. It’s only a few weeks,” an older television anchorman called out as he fanned some fingers up in the air for effect. “Should we be concerned?”

Vanderbilt cupped a hand above his eyes before replacing his glasses. He stood awash in the bright camera lights in his white lab coat. He was secretly enjoying his fifteen minutes of fame.

“Well, quite frankly sir–we’re not certain about that. Some of my colleagues pooh-pooh this Jovian lunar parade away as merely a very rare astronomical phenomenon while still others are ready to sound the alarm for some resounding global catastrophe.”

“What do you think? Is something big gonna’ happen, something…major?”

“I think that this unique experience just may affect some of us rather… passionately.”

Soon newspapers and magazines worldwide jumped all over the extraterrestrial event:

What Goes Around Comes Around! USA Today

From far and wide even the most modest of local newspapers joined the craze:

And so what began as a whimsical curiosity for most rational people around the globe soon became a growing concern as December twenty-fifth and the alignment of the sixteen distant moons drew near. The professor grew ever more concerned, eventually extremely apprehensive.

“Come to bed Godfrey,” Mrs.Vanderbilt sighed as she squinted out from the crater-like depression of her down pillow. “For heaven’s sake it’s 3 o’clock in the morning! You’re going to stir up the grand kids downstairs on their pallets with all your pacing.”

“Ssshh Mariane–I can’t sleep! In a few hours they’ll be set in line, all of them! The Galileans–Io, Europa, Callisto, Ganymede and then falling in perfect alignment Metis, Adrastea, Almalthea, Thebe, Leda, Himalia, Lysithea, Elara, Ananke, Carme, Pasiphae, and Sinope all tugging away with the mighty force of Jupiter behind them! The effect of it all, the gravitational force and pull on us. There will be devastation Mariane— heaving, catastrophic shifting tides, Tsunamis, global flooding and then…”

“Oh stop that nonsense Godfrey Vanderbilt,” she sighed. “You’re driving me crazy with all this moon business. You’ve managed to convince everybody but yourself that there’s nothing to it all. She rolled over on her side like some large, foundering ocean liner. “Come back to bed. Tomorrow is Christmas day for heaven’s sake!”

Vanderbilt loped over to the triptych of bump out bedroom bay windows that overlooked the snow covered back courtyard of the two story brownstone. The moonlight seemed almost phosphorescent as it washed over everything below. He massaged his pulsing temples with the very tips of his fingers as he gazed up at the twinkling darkness of the sky. He focused his attention on the radiant North Star… Polaris, everyman’s ultimate guide for hope and direction. A glistening tear wandered down his cheek, controlled only by gravity and fate. He made a silent prayer as he pressed the sweating palms of his hands against the frosted window pane:

“Dear God, here and now on the birthday of your only begotten son, save us once again. Intervene again. Spare us the pain and suffering of this catastrophe. Let it be. Please… let it be.”

In the morning, the Vanderbilt house was alive with the excitement and wonder of Christmas. Sweet smells wafted from the kitchen. Singing and chatter by the green and silver tree, but for professor Vanderbilt pressing away on the TV remote control everything seemed Norman Rockwell perfect.

“Godfrey! Please turn that thing off and come join us in the kitchen for eggnog.”

Vanderbilt was studying the screen with grave intent and interest. Finally he placed the remote back down on the coffee table.

“I think it’s over and we’ve made it through!” he said to no one in particular. He reached for the phone on the mahogany end table and was about to make some phone calls. His green and red aproned wife came and stood behind him. She placed her floured hands on his shoulders and began to kneed them like cookie dough.

“I told you everything would be okay Godfrey. Nothing happened! Remember, the Lord and this universe, must work in strange and mysterious ways.

Please come along now and join us in the kitchen for some of the nice eggnog… ‘mmm!”

Vanderbilt raised himself up with a deep sigh of satisfaction and followed the cooking scents into the white warmth of the kitchen. It was true nothing had happened. His wife was right–strange and mysterious ways indeed!

Mengapi Pinjvanda had guided his herd of milking goats and rather extensive Himba family through this region many times in the past. The Kunene River that snaked its way through this particularly arid and desolate section of the Namib had always been an oasis. But now, in the last year or so, the Kunene had dried up into a parched red clay rut. It had become only a pathetic thin highway for stealthy sand lizards and a crude, twisting runway for scavenging vultures. As he sat there with his long willowy black arms crossed over his knees, he tilted his head down as if all at once the total weight of his frustrated efforts to exist had pushed down upon him like some great and merciless weight. His pipe-stemmed children in their pathetic faded American relief T-shirts and the struggling sea of emaciated goats all gathered around him hoping that somehow he could bring the cool flow of water back to them. A cruel scene of futility and barren despair.

There was an impatient rumbling, a shuddering tremor off in the distance. They could all feel the quivering vibration along the dried mud of the crevasse that was the Kunene. Then, like an eye-blistering mirage, the waters rushed past them. A thin, muddy ribbon at first and then, gradually, a churning silver flow of refreshing liquid life. They staggered forward and cautiously dipped themselves into the rushing water. Many of them fell to their knees there at the bank of the rejuvenated river. They scooped the dried cups of their hands down into the cool wetness and pulled up a refreshing drink. The skeletal goats fanned out and waded in, bleating and crying out as they felt and slurped at the crystal waters of the revived Kunene.

Mengapi raised himself up and blew out a thin sigh of ecstasy. He shuffled forward and stepped out into the miraculous river. He stood there letting the cool, rushing water massage his burning feet before he had even noticed it off on the lavender horizon, just above the jagged mountain range. The herdsman cupped his crusted hand over his squinting eyes and tried to focus on the star. It was the silver star of guidance hanging up in the bright blue sky like a flickering campfire. Here, in the light of day, it shone down for all to see. Mengapi collapsed to his knees and wept at the strange and miraculous beauty of it all.