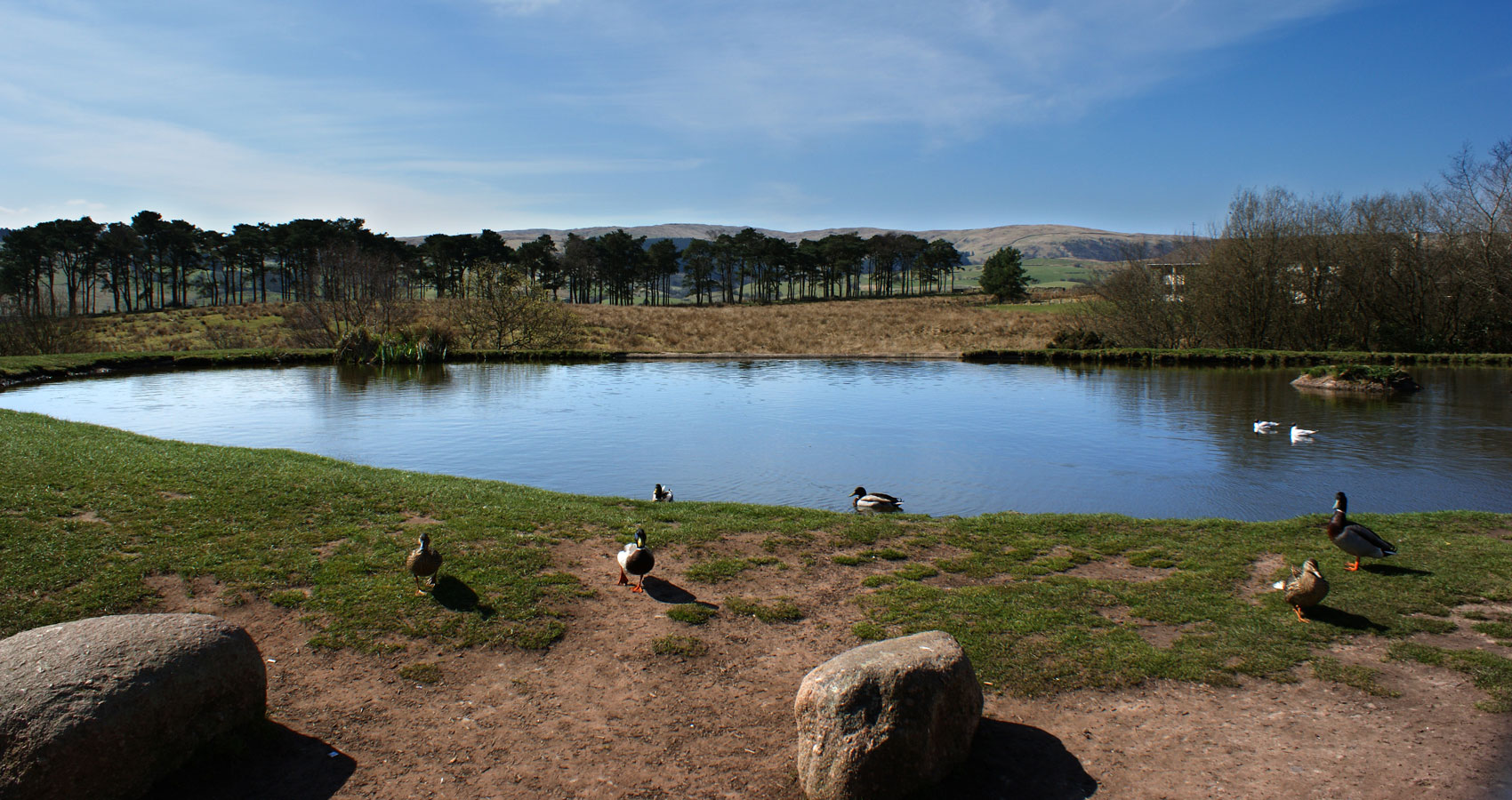 When Carl switched the engine off he was still trembling. The radiator grill was dented and though blood and feathers covered the cracked housing, the pheasant itself had been left on the motorway.
Carl bought a cup of tea. He was in luck, there was a table free next to the window looking out across an ornamental pond. He congratulated himself on securing his seat, all those around were taken. Outside the window several swallows dipped and arced over the pond, diving, he supposed for insects. They were early, it was barely April. He admired their grace, scimitar wings, and twin tail darting. As he stirred his tea a movement on the water drew his attention. At first, he thought it was a fish surfacing then realised it was a swallow, floating with wings outstretched, head angling upward, gasping for breath. Carl realised that the other swallows weren’t diving for insects, they were diving towards their friend. He sipped his tea, thinking back to the pheasant and shivered, not with any sorrow for the bird, rather for his own near miss, at the consequential swerve, the horror of the impact as it shook the car. He marvelled at how something so small could make such a huge impact.
Carl’s gaze returned to the struggling swallow. Its movements had brought it no closer to the side, and even if it succeeded, the banks were steep. He doubted it would have the strength to haul itself out. A tremor of pity ran through him. It was, he realised, in his power to save the bird. He could let it live or, if he chose to do nothing, it would die. He continued to stare at its increasingly laboured movements.
The people at the next table got up to leave and a couple of young boys dived into their seats. Following and apologising to the departing couple came the boys’ father, a bearded man with the physical assurance and the confidence, Carl mused, that only a public school education could instill. Following a few yards behind came his wife, brittle and blond.
Carl looked away and back at the drowning bird. Its movements were less vigorous. What could he do? There was no door to the lake, in fact, it seemed isolated from anywhere that the public could access. Even if he could get out, what would he do once he was there? Wade into the lake? Drive the remaining three hundred and fifty miles in wet trousers? And with everyone watching… It would be like a performance.
From the next table came a piping voice.
“Look Dad. A bird in the water.”
Dad was a man born for such occasions.
“Wait here, boys.”
He was off, moving through the restaurant and out through the doors. His wife and the boys stood and moved to the glass. Carl took another sip of tea, wanting to leave but knowing that he had to see how it played out, also feeling it would be somehow indecent to leave without knowing, as though the bird’s fate was of no consequence, which was, of course, the case.
“There he is,” squealed one of the boys as the manly father appeared from around the corner of the building. At the edge of the water, he took of his shoes and socks, rolled his trousers and waded into the shin deep water. At the man’s approach, the bird began, with the last of its reserves, to struggle with renewed vigour. The man bent and scooped it up in cupped hands, raising it for his audience to appreciate. There was a cheer and Carl felt obliged to clap, even managing a wry smile. He wondered if the man could feel the bird’s heart beating against his fingers. The father placed the swallow some distance from the edge where it shook itself and crouched miserably. The father squatted and regarded the bird for a few minutes before standing and turning to the glass. He shrugged and pulled a face as if to say, “what more can I do?”
Soon the family left and Carl felt able to relax. He poured the last of his tepid tea and watched the bird. It remained where the father had left it, shivering on the bank.
Without warning the bird attempted to raise itself, managed to stumble, one wing tucked, the other straggling to one side. Its friends seemed to redouble their swooping as though in encouragement and Carl was surprised to find himself touched by their interest. Please God, he thought, let there not be cats about. The bird stood, wobbling slightly, before taking a couple of drunken steps in the direction of the lake. Carl could feel his breath quickening. Surely it wouldn’t be so stupid. All of a sudden the bird made a series of flaps, leaping as it did so, attempting to go skyward. It fell, leapt again, and dropped off the edge of the bank and into the lagoon.
There was a pathetic, inaudible splash. The little bird was floundering once more, but this time with far less conviction as though it knew the game was up.
Carl’s phone vibrated. He glanced at the screen. It was Annie. He pressed ‘Ignore’ and decided at that moment to get a pheasant and a swallow tattooed on his left arm, on the bicep. It would look ridiculous but it would be hidden by his sleeve. The tattoo, he decided, would mean nothing other than to remind him of the day when everything changed, when he took control of his life. He wouldn’t explain it to anyone, not even Annie. He took a deep breath.
He would save the swallow. And he would save it properly. Damn the consequences.
He drained his tea and grimaced. It was cold. No one you know, he thought, will ever know that you have done this thing. He sighed, pushed back his chair and stood with more intent than he had in years.