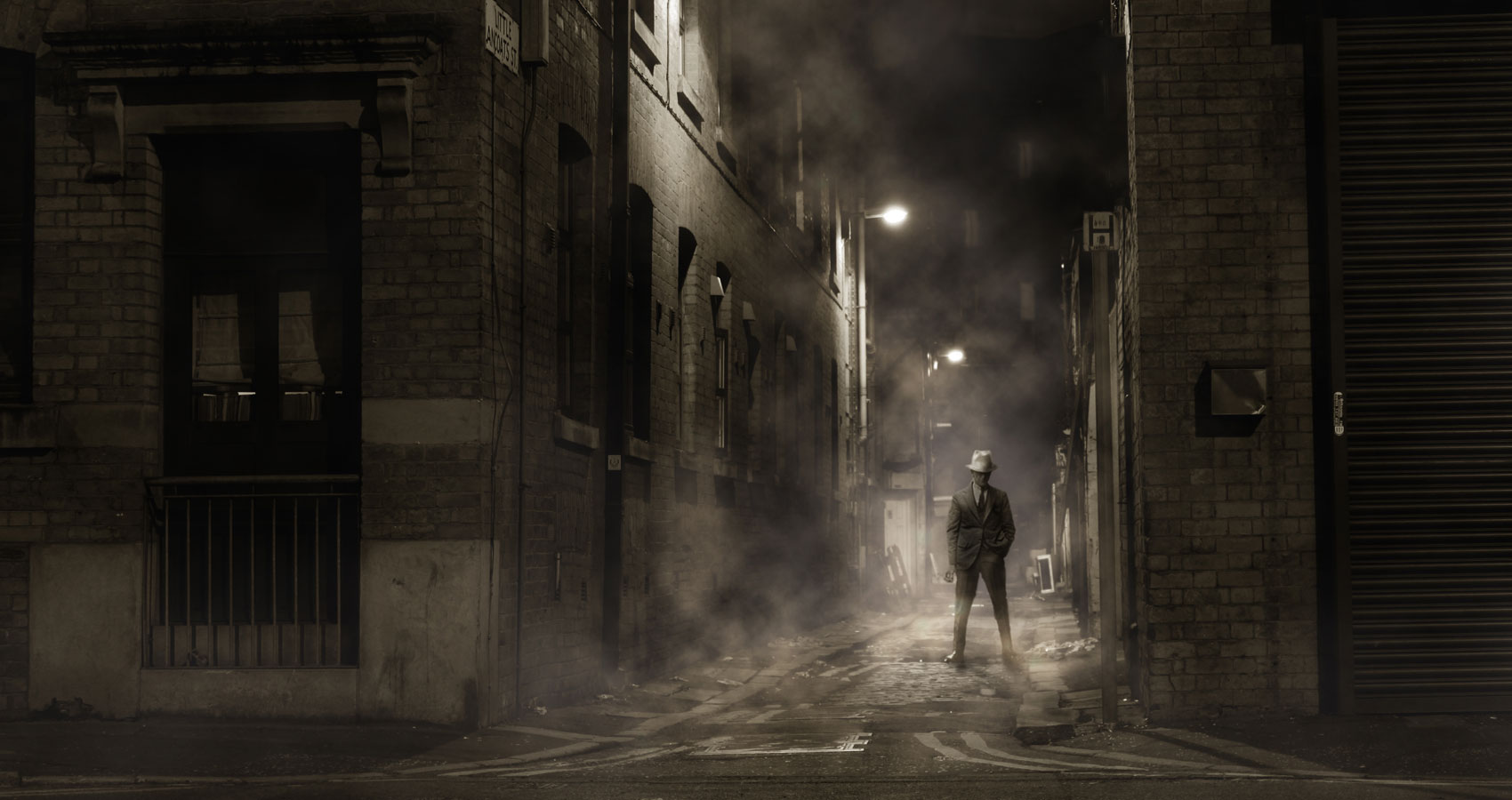 The darkness hit him with the kind of blow normally expected in a boxing ring. The sort delivered by Tyson in his prime, before he became the victim of gangsters and women. It was that hard. He reeled.

The lane was always dark, but that night its few streetlights had failed. Unfortunately, he had no choice but to use the lane to get to the party in the village centre. For the past few days his car had been in the local garage getting repaired and walking was not his chosen method of getting around.

He stopped at the beginning of the lane before venturing in. A breeze was blowing, rustling the branches either side. He could see only the immediate  area around him. Otherwise, it was like looking into a tunnel that met in a single point of intense black. With trepidation, feeling like a small boy, he stepped into the darkness. The solid response of the tarmac reassured him.

He quickly discovered that his sense of direction ceased functioning without light. He fully believed he was walking in a straight line, but after five minutes he tripped over clumps of weeds by the roadside. He half fell, did a bizarre pirouette, reached out grasping at the air, and regained his balance. Once steady, his hand locked onto a gate that led into the nearby field. He briefly massaged it, before taking his hand away, lingering for awhile on its rusting metal hinges. Try as he may, he could not see it. With his foot he searched for the tarmac, but only found soil. The darkness crowded down upon him. He stumbled forward, finding it difficult to walk with any speed.

Sporadic birdsong, coming from the distance, soothed him. It was reassuringly ubiquitous. Persevering he rediscovered the tarmac and set off again in the direction of the village.

The impression prevailed of increasing blackness. Nevertheless, he kept on walking. After half an hour he became anxious. Reason told him he should have reached the end long before. The lane was only about quarter of a mile, fairly straight, and easily walked through. It did not unnecessarily wind. By now, he mused, he should be sitting beside Gaynor, drink in hand, his arms around her shoulders not struggling in the dark down an inconspicuous country lane. The drumming music was in his ears, the beer coursing down his throat. By now, Josh would be handing out the cocaine. Then, the party would truly get going.
Again, he tripped and stumbled. He managed another equally clumsy pirouette. Reaching out with his hand he once more grasped the open gate. He shook his head. Had he somehow walked in a circle? He felt the grain, gently massaging the wood. He recognised the series of knots on the top beam. He touched metal, once again feeling crumbling rust. He searched around with his foot, eventually, again, reaching tarmac.

The confusing thought struck him that he had walked in a circle. He furrowed his brow and scratched his head wondering how that was possible. The lane was simply neither long enough nor broad enough for such an outcome. Perhaps he was wrong, and he was handling a different gate. But there was to his knowledge only one gate leading to the fields from the lane. Had he retraced his steps, become so disorientated that without realising it he had turned on his heels, walking back the way he had come? How else could he explain spending half an hour walking down the lane without arriving at its end?
He looked back, hoping to retrieve his steps and find another way to the village, or forgo the party and spend the night watching TV safely at home. Before him was the wall of black. It enveloped and imprisoned him. Now, he was uncertain which way to go.

Placing his feet on the tarmac he started walking again.

The birdsong had stopped. It had ceased minutes before he was conscious of its stopping. He began to perceive how silent the night had become. The silence seemed to grow in volume, filling the emptiness. John became afraid. He hadn’t been really scared since he was a boy, from the time he’d entered a ghost house at the seaside taken in by his slightly older brother. At six, everything seemed real to John and the scraps of torn clothing floating from the ceiling, the papier-mâché faces leering from alongside the rail track, made him scream in terror. He’d experienced nightmares for months afterwards. Now his terror was even greater. The night’s peculiarity was not for the entertainment of small boys and impressionable adults. It was real.

Perspiring profusely with anxiety and exertion, walking now required increasing effort on his part. He felt as if he was pushing against something. If he could have seen his surroundings, known what was around him, he would have collapsed on the spot. Curled himself up on the road until he was revived, and ready to begin again. But uncertainty caused him to continue walking. Determinedly, he placed one foot in front of another. After ten minutes he stopped and stretched out his arms. It felt as if they were entering water. There was resistance. He began to panic.

The black weighed him down, pushing against his shoulders and forcing itself upon his chest. He was trapped in an incorporeal snare. He threw out his arms again, roared and darted forward screaming.
The night did not let him fall, but cradled his unconscious form. It lifted him up, carrying him along. His body slowly moved into an increasing blackness, an intense, infinite colourless void. At the centre was a swirling hole of an even deeper black. Slowly, he was fed into the centre feet first.

In the morning heated and lighted by the morning sun the lane looked the same as it always did. Trees glimmered green. Grass shone with the early dew. In a ditch, between the hedgerows, beneath stones the blackness lurked, waiting for another opportunity as it ingested last night’s meal.