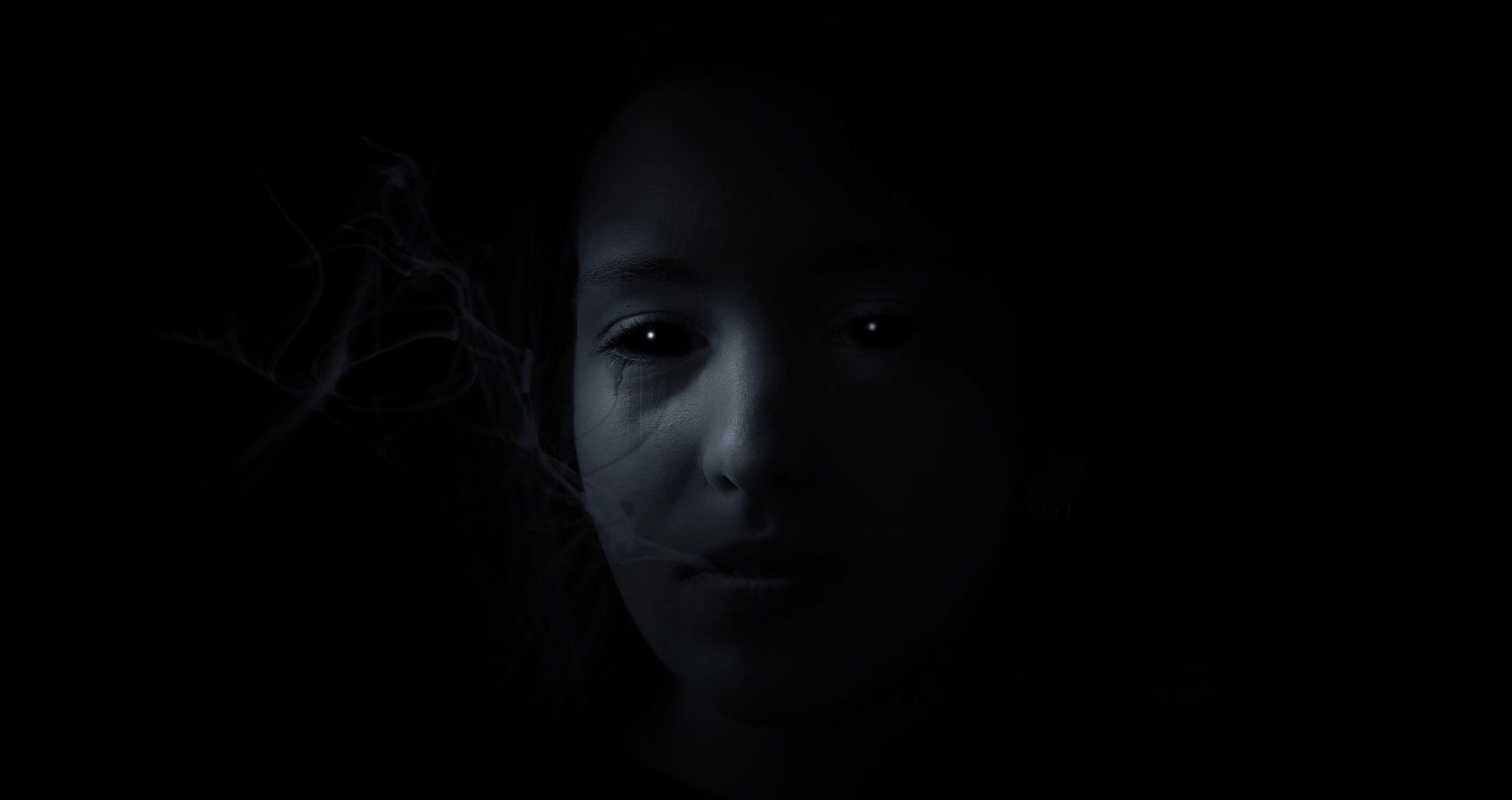 Spirits are real; I know that now. I’ve also learned that they aren’t all evil, either. And the good ones don’t like being called ghosts. If spirits were a race (and I suppose they are), then “ghosts” would be the derogatory slang term that makes them all cringe, and it’s highly recommended not to upset a spirit.

I often wonder if we all can see and interact with spirits when we are infants; like perhaps it’s a natural ability we simply lose as others’ beliefs are forced upon us. Pop culture has programmed us to believe in their malevolence, and humanity is plagued by the innate fear of what we do not understand. I write this now in hopes that I can bring understanding to a broader audience, helping more spirits find their peace.

The girl with the obsidian eyes first appeared when I was ten, her gray face streaked in black tears. I was at first horrified, then I noticed her hitching sobs, her wailing lamentation. I had slipped into my mother’s studio to sneak her fancy watercolor pens for my artwork when the girl suddenly appeared in the corner. She wasn’t translucent as spirits appear in film and TV, but she was blurred at the edges, and her form constantly stirred, as if I viewed her through a shifting lens, unable to find focus. Amazed, I watched her failed attempts to grasp a paintbrush before a blank canvas on an easel in the corner. Her tears broke my heart, and despite her off-putting appearance, I wanted to help her.

Her black eyes turned and focused on the markers clutched in my sweaty hands, and her wails increased as she turned back to the canvas, her fluttering hand falling through the jar of brushes again and again. I slowly approached. “Do you need help?” I said softly. She opened her mouth to speak, but only the sounds of her sadness escaped; tar-like tears cascaded down her cheeks in black rivulets. She nodded, her head shifting in a hypnotic blur.

I picked up the brush as she drifted backward. “Is this what you want? You want to paint?” Again, she nodded eagerly, and the varying effect of her form seemed to still. How could I help her? I saw that she was gorgeous underneath her oil-slick tears and daunting eyes. I imagined what she looked like when alive. What color were her eyes? A flash of inspiration came.

“I’ve got an idea! You point to the colors you want, show me the brushstroke, and I’ll copy you. It will be just like painting with Bob Ross!” The girl with the coal-black eyes cocked her head, confused.

“Oh,” I giggled. “Bob Ross is this guy with puffy hair that paints on TV… not important…”

She quickly began pointing at paint tubes, holding up numbers, and making swirling symbols over the pallet. I followed along, mixing paints into shades of a fiery sunset. Then she pointed at a different brush and began making long elegant gestures over the canvas, her wrist undulating on an invisible current of air. Soon, we seemed to understand each other, and the process accelerated. Hours passed, and I lost myself in the art of creation, my ears deaf to the sounds of my mother stomping upstairs.

“Amelia!” my mother called from down the hall. Suddenly I panicked, realizing she’d find me in her art room, somewhere I’d been repeatedly told not to enter without her. The woman with the obsidian eyes blinked away as my mother’s footfalls echoed nearer. “Where are you, honey? I hope you aren’t in my studio!” The sweetness left her voice with every word. I was busted.

“Ameli…” my mother gasped. My arms and hands were covered in paint, a brush in each hand as I shamefully rose my head to meet her eyes. She wasn’t even looking at me. Instead, she was transfixed upon the freshly painted canvas. “Oh, my lord…” she said, all annoyance leaving her voice as it filled with a lilting reverence. “Did you paint that?” She approached, apparently awe-struck.

“Kind of…” I began, stopping myself from admitting to my grayscale helper. “Well… yes, I painted it, Mommy. I’m sorry, I know I’m not supposed to be in here…”

Mother began muttering under her breath, utterly fascinated by the painting. “Did you copy this from one of my books?” she said nonplussed. Her eyes shot over to a bookshelf housed with volumes of thick art books, scanning spines for something specific.

She looked at me in a way she’d never looked upon me before. It seemed to convey confusion mixed with horror mixed with awe. “This is incredible,” she said. “In fact, it reminds me of one of my all-time favorite artists.” She bustled over the bookshelves and pulled out a thick black-bound volume, and began flipping pages. She fell down heavily in a chair, and her gaze repeatedly drifted from her book to my painting.

I had been so focused on following the black-eyed woman’s instructions that I had yet to focus on the work as a whole. I later learned the piece used the thick, visible brushstrokes of the painterly style. Up close, I focused on the ridges, the masses of paint rippling like the waves of a stormy sea. Yet, backing away, I saw the painting took on a majestic appeal, unlike anything I’d ever created.

“This can’t be a coincidence…” my mother said, and I scurried to her side.

“What, Mommy? What’s a coincidence?” I said.

She placed the book on the table and showed me an image; my eyes felt like they bulged out of the sockets with surprise, as the picture looked almost identical to my still-drying artwork, a sunset over a field of grass that seemed to dance like flames. “You promise, you didn’t look at this book, Amelia?”

“I never told you because I didn’t want you to be scared when we moved here, but a famous young artist owned this house before us, and she was found in this very room. In fact, this room was her studio, too. It was one of the main reasons I bought this place.”

I looked at her wide-eyed. “Someone died here? What was her name, Mommy?”

“Her name was Amelia Daniels,” mom said. “I took lessons from her when I was a teenager. She was the one who inspired me to become an artist.”

Mom nodded. “I named you after her, baby. She was very special to me.” She flipped a few pages and turned the book to show me a picture of a beautiful young woman with dark features and sparkling brown eyes. I recognized her at once and did my best to conceal my shock.

“A nasty, jealous person hurt her, honey. She loved her art more than anyone or anything. And while that hurt those who loved her, it was why her work was so extraordinary.”

I thought about what she said, and became very sad. It made my mother sad too because after saying that, she looked at the woman’s picture and then at my painting and began to cry, quickly running out of the room. The woman must’ve been important to my mother if she bought her old house.

I stared at her picture once more, amazed at how beautiful she was, and suddenly wondered where her spirit had gone. “Amelia?” I called softly, turning to look around the room. “Amelia, are you still here?”

The woman with the obsidian eyes suddenly appeared back in the corner near the easel, and we looked at each other. My young mind could barely contain all I had learned. This famous artist not only knew my own mother but had owned my house, died here, and I had been named after her.

As I looked upon her shifting spirit, I filled with sadness, wishing I could help her more, wishing I knew more about who she was when she was alive. Her gray face spread into a soft smile, and the deep, dark pools of her eyes began a fresh waterfall of tears—this time, instead of black tears of tar, they fell down her cheeks in rainbow rivers of vibrantly colored paint.

Jason Herrington is a recent transplant to Colorado who discovered a passion for writing after years of blogging. He now spends his time writing pieces of photo-inspired fiction for Instagram and working on short stories and novels. You can find his social media pages and a handful of creepy short stories at WordPress - Jason Herrington.