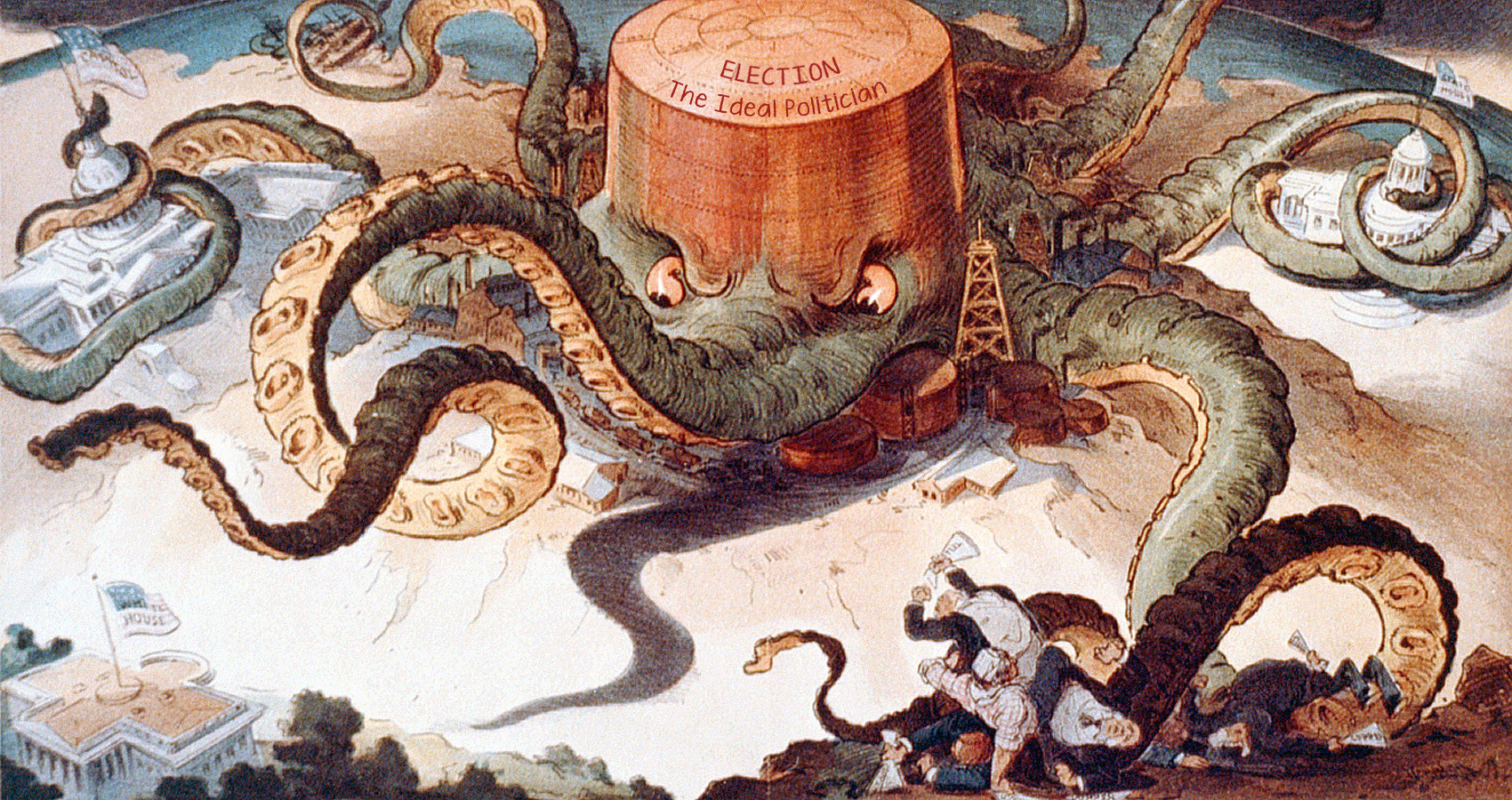 A year later Ecreep sat in his office, resting after a nourishing meal. Everything had gone well. The Stock Market was greedily sucking in money like an omnipotent tornado, spreading its whirling winds across the known world, spitting out the eviscerated remains of companies and smaller nations. The rich, particularly those in his Cabinet, were gathering immeasurable wealth. His approving colleagues were stalking the gloomy gothic halls of Westminster like a phalanx of deadly Midas’s. London pulsated with building-work. The arts flourished with pubescent abandon. At least one new or second-hand Mercedes was parked on every London street.

Slumped lazily in a dark-velvet-covered Edwardian chair he was watching the TV intently, mesmerised by the final hours of the USA election.

Arthur’s remains, shoes, tie pin, had just been cleared away. He was pleasantly surprised at how tasty the old man had been. Sadly, eating him had proved the only possible option. Although he’d been surrounded at all times by security and policed as well by a volatile gaggle of doctors ready to fill him with even more drugs if he’d tried yet again to expose the PM’s identity, he remained a liability. The Cabinet, meeting one morning without him, quickly agreed on his fate.

Arthur had not struggled. He had indeed entered Ecreep’s expanding stomach with a smile and a truly rousing chorus of Elgar’s Land of Hope and Glory.

Swigging sparkly water, Ecreep swelled with immense pride as Etrum appeared on the verge of triumph. His cousin, whom he hadn’t seen for a number of years, had long before made his name (or rather his human alias) as a charismatic businessman. Now, here he was-the most powerful man (or rather Synopes) in the world.

The voting had been completed by the morning, and all votes were counted. The result, to everyone’s shock, flashed across the world’s television screens.

Gordon Trumble (Etrum) was the new President of the United States.

“Thanks for all the help, cous.” Etrum began. “Wouldn’t have done it without you.”

“Thought I’d phone you first. Out of courtesy.” As usual Etrum’s voice was unnaturally loud. “Desperately needed to say ‘thanks’ for your much-needed advice.”

“Really, think nothing of it. We Synopes.have to stick together.” Ecreep stopped to sip some water again. He got parched quickly, especially when talking. “How’s the wife?” He asked solicitously. “Couldn’t see her at the closing ceremony.”

“Tasted absolutely delicious! I got over-excited. You know how it is, and, well, she was nearby at the time. I’ll have another one soon-another blond. No one will notice.”

“Oh, these humans rarely do.” Ecreep agreed. For him, all, or most, humans looked the same. He could only tell some apart when they spoke, as all human voices were slightly different, with all kinds of high and low ranges.

On the TV, the experts were frantically analysing the result, coming to all kinds of apparently sane answers, from hypnotised electorate to fraud. They left out only the actual reason-alien invasion-although at that very moment a drunk solicitor was proposing that very thing in a grubby New York bar to the smart-ass derision of his fellows.

“I do. I remember it well. Took me an entire day!”

“Don’t overthink it, cous. Just use a pin. Worked for me.”

Although his new Cabinet were not noticeably talented, they did whatever Ecreep asked them to. No complaints! No questions!

“Well, I’m off now. We can talk again later.” He paused. “I have to call Eput. The line to Moscow is never clear, you know. I’ve asked him to fix it several times.” He sighed dramatically. “Him and I need to have a chinwag. Gotta him my thanks too.”

“Of course.” Ecreep stared again at the TV screen, switching the programme with its interminable gabbing over to watch a documentary on the North Pole. Seeing all that snow relaxed him. No stains. No impurities. “Next week, let’s all meet up. We haven’t seen each other for decades, not since we shared a hole together in the sewer. Happy days!”

Laughing, Ecreep put his phone down. He was surprised at how quickly his species had taken over so many important political positions. Hopefully, China would prove their next gain. They were working on it. All of them. After all, the Chinese were considered unusually delicious, especially with a squirt or two of soya sauce and a bit of fried chicken.