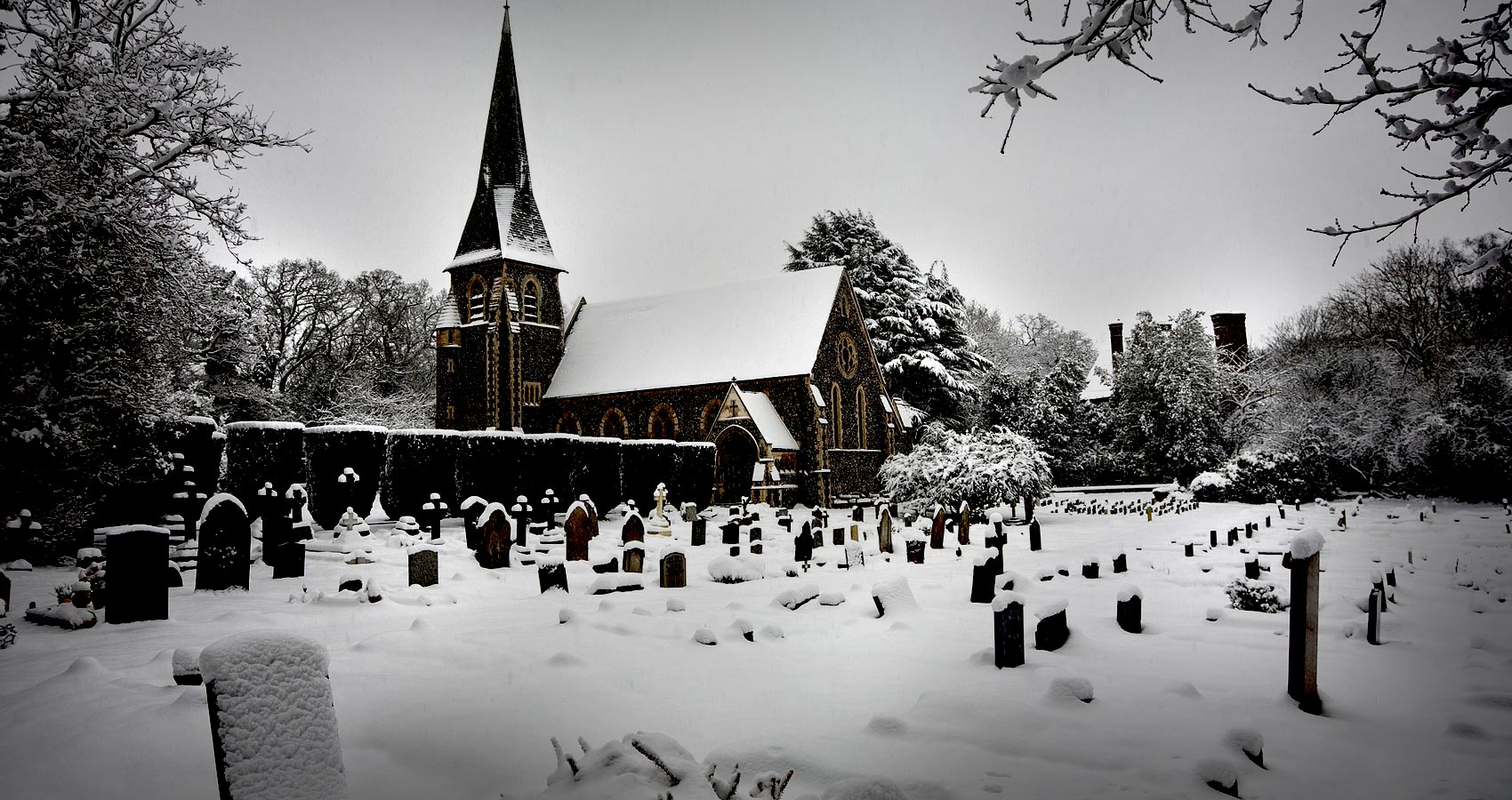 Snow has fallen on a graveyard late one winter night
each tombstone cast a shadow in the full moon light
the bones of trees stood ‘round about and shrouded in the snow
the land lay cold and frozen, the wind was blowing low.

In the middle of the graveyard where drifts of snow had blown
Among the graves and mausoleum was a church of wood and stone
No peal of bell was heard from the lonely steeple tower
The church was dark and empty for it was the eleventh hour.

That hour before midnight was silent dark and cold
The moon had risen to her height the night was growing old
Then somewhere in the distance a sound like thunder rolled
Midnight came on with discordant tone for the steeple bell now tolled.

Inside the darkened church a burning light begin to grow
Casting shadows on the wall and its unearthly glow
Twelve times the bell tolled ringing for each hour that had passed
A call for all the dead to come to a Requiem mass!

Then swirls of snow arose all around whipped by a rising wind
The black iron cemetery gates creaked on rusty hinge
Ghostly figures rising seemed to glide upon the breeze
Like the dancing of the shadows of the branches on the trees.

A hunter out a hunting had seen the glowing light
Shining through the windows of the church that winter night
Wandering past the graveyard when he had lost his way
Fearing for the cold and dark and longing for the day.

Then looking on the lighted church the hunter took delight
In a refuge from the wind and snow and safety for the night
For gladness in his heart “Oh thank the heavens!” there he cried
Then on their own the cemetery gates creaked open wide!

He stood before the open gate and paused a minute more
For he beheld a hooded figure at the front church door
He thought his senses must be wrong, his mind his eyes belied
Without opening the door the hooded figure passed inside.

With uneasy step he slowly made his way ahead
Half with hope for warmth and safety half for fear and dread
Opening the door he saw the congregation there
They looked on him through piercing eyes with an icy stare.

Their faces all so gaunt and pale were staring back at him
Their eyes were black as midnight their countenance was grim
They spoke not a word for their lips were sewn with a binding thread
But with envious eyes they glared at him this congregation of the dead!

Colder than the wind and snow a chill shot through his frame
When he heard the Sexton at the front calling out his name
Black was the color of the vestments that he wore
Then of a sudden he was by the hunter at the door.

Underneath the hooded robe that was covering his head
Like burning coals in a fiery flame the Sexton’s eyes glowed red
A bony hand he placed around the hunter’s arm and said
“Come with me, come with me, your place is here among the dead!“

He led the hunter to a window, with gesture of hand he waved
Pointing to an old oak tree where lay an open grave
The mournful dead pressed all around as the organ pipes did wail
And from that grave a light shone forth like the burning fires of hell!

A candle at each window seal made flickering shadows dance
And cast a spell that held the hunter in a deadly trance
The spirits gathered all around him in a ghastly throng
The time was short, the night would end, the dawn would not be long.

He saw a shadow rising from the corner of his eye
He heard the flap of wings from the rafters way up high
The spirits of the dead groaned like the moaning of the wind
He saw the reaper clothed in black and darkness there descend!

Just then the door flew open from a sudden gusty breeze
An icy breath that filled the church each candle flame did tease
A slap of wind across his face released him from the spell
And all went dark except the glow from where the moonlight fell.

The hunter bolted out the door into the frigid night
His heart was racing, his legs were weak, his mind was filled with fright
He knew not where he ran for a panic filled his mind
Just like the hunted from the hunter he was running blind.

Blacker than the darkest night he felt the reaper scythe
Overtake his will his body chill to rob him of his life
For his very soul he screamed with no one there to save
Then pain shot through him and he fell into the open grave.

A party out to search for the hunter who was lost
Had seen the graveyard in the distance where two roads had crossed
The church was all a sparkle from the morning sun so fair
They were thinking that he might have tried to find a solace there.

Looking all throughout the church they sought for him in vain
Checking pew and balcony and calling out his name
But over by the window and lying on the floor
They found a hat they recognized as one their friend had wore.

They saw a movement out the window by an old gravestone
There beneath the old oak tree the hunter stood alone
With joy they went to greet him because their friend was saved
But they found him cold and stiff and dead in the open grave.

Now on some winter nights when the moon has risen high
If you’re wondering past that old graveyard and you hear a mournful cry
And you see strange shadows moving like a mist upon the breeze
And you hear a gossamer rustling like the wind through fallen leaves.

If you see the windows of that church glow with an eerie light
And you hear the haunting strains of organ music through the night
Keep walking on, do not go through the cemetery gates
Though the wind blows cold with rain or snow and the hour is growing late.

You may hear the lonely cry of a hunter lost that night
As he staggered there among the graves so full of dread and fright
You may see a black and hooded figure bidding you to come
Pay no heed, do not go in, do not look back….RUN!!

I’m a 63 year old male born in Ohio but now I reside in Alabama. I believe there are things that are part of the natural world that exist beyond the five senses. I enjoy trying to create a mood with words.