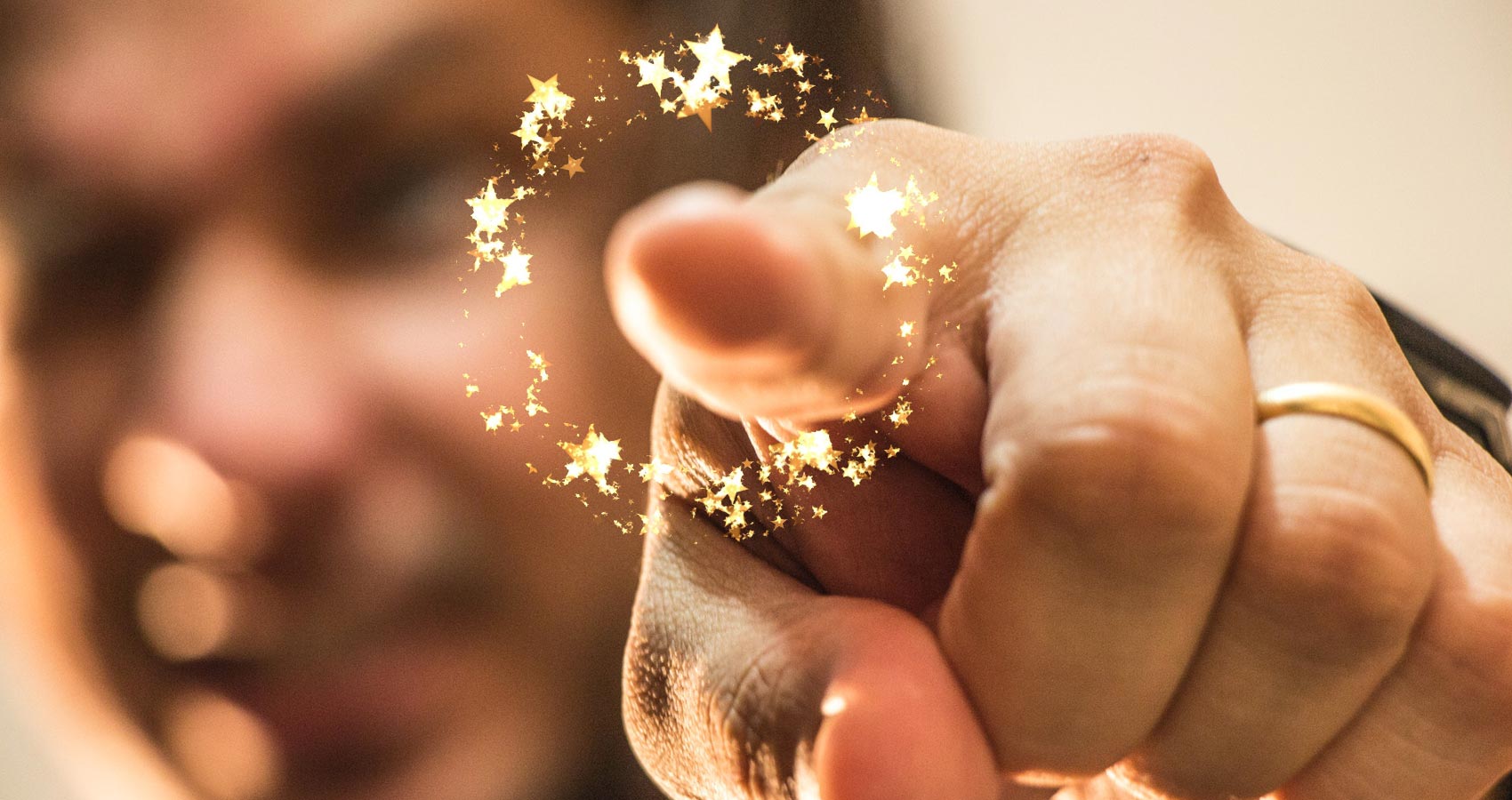 The Wizard Next Door

The Wizard Next Door

The black lab and the old man strolled past my front lawn every morning. The dog’s name was Bud and was the sole companion of my next-door neighbor, Charlie Palmer.
At 6 A.M., loud thumps dragged me from a deep sleep. I threw on jeans and a Tee Shirt before answering the door. Charlie stood on the stoop, shoulders slumped, with tears running down his face. “Brandon, they killed Bud.”
At first, I didn’t understand the horror of the situation. I shook the sleep from my head. “Come in Charlie. Tell me what happened.”
He nodded and shuffled through the front door, wearing blue pajamas, a terry striped cloth robe, and maroon mule slippers. I settled him in an easy chair and went to make tea.
I cast a heat spell to boil the water. I’d inherited magic skills from my great-grandfather. Although sorcery was known, it was not common, and abilities varied between individuals. I tested at 7.55 on the Merlin scale.
By the time I brought Charlie his drink, he’d stopped sobbing. We drank in silence as I waited for him to tell me the story. He sipped his tea with quivering hands, then turned his red eyes towards me. “I found him in his bed this morning. Stiff. When I let him out last night, I saw him eating something in the backyard. I tried to call him off, but he’s a dog, and didn’t listen.”
I wished there was magic to make him feel better. All I could do was listen. When he was ready, I lead him next door. “I’ll take care of Bud.”
He nodded with moist eyes and pointed to the furry lump laying by the back door. When I looked at the dog’s body, I noticed green drool coming from his mouth. After wrapping Bud in his bed, I carried him into the backyard and laid him on the grass. The three imps I conjured dug a hole under the elm tree and covered the grave with flat stones. I cast a power spell and carved BUD into a flat rock.
I washed my hands in the kitchen sink and called to Charlie, “I’ll make us some tea.” When I didn’t get an answer, I walked into the livening room and found Charlie slumped in his chair. An ambulance arrived, but it was too late. Charlie had joined Bud in the next world.
The neighbors and I were the only mourners at Charlie’s funeral, and I took possession of his ashes. I dug a hole and buried Charlie beside Bud. The old man had a third cousin who inherited the house and its contents. I hoped whoever moved into the house would respect the graves.

One month after the funeral, I’d set the imps on my dandelions when I heard a vehicle stop in front of Charlie’s house. I still thought of it as Charlie’s house, although I knew I’d have new neighbors soon. Two men in their late twenties dressed in Hugo Boss suits exited a black BMW and entered the house with a key. I was curious and walked to the car and left the imps happily munching dandelions. In the back window, a sign read Kasbah Developments. When I returned to my property, the two developers left the house and walked into the backyard, whispering to each other. I cast a listen spell and followed their conversation.

“Big lot, Troy.”
“Take some pictures with your phone to show the architect. I think we can get a 2,000 square foot house and a double-car garage on this property. Should go for 1.3 to 1.5 mil. What do you think, Justin?”
“One point five at least. Good thing the idiot cousin took our first offer. No luck with the interior, no antiques, no collectibles, just old man junk. I’ll hire a couple of guys to clean it out and take the contents to the dump. Did you see those stones under the elm tree?”
“Yeah. Ugly. They have to go.”
“Maybe we should have gone to the old man’s funeral. We’re kinda responsible.”
“No, we’re not. Remember, we figured the old man would go into a nursing home after we poisoned his dog. We didn’t know that he’d have a heart attack. Shit happens.”

They killed Charly and Bud. But I can’t prove it. Anger and psychic energy flared in my head. With a flick of my hand, I directed the force towards the BMW. First, the left rear tire exploded, then the front right tire followed with a spray of rubber. The sudden release of power made me dizzy, and I sat on the lawn. I let the imps return to their realm.
“Dam it, Justin. Both tires. How the hell did that happen? Call AMA and get them out here pronto, or we’ll be late for the lunch meeting.”
I cleared my foggy head with a shake and cast a twitch spell on Justin’s hand. He dropped his cell phone. Before it hit the sidewalk, I threw a burst of energy into a shatter spell and admired the explosion of obscenities from Troy. They left in a Yellow taxi. I crawled into my house and slept for a solid eight hours.

Two days later, a truck arrived carrying a bundle of metal fencing. The crew of four set up the metal fence around the property next door. About noon, a moving truck arrived and three men removed the contents of Charlie’s house. I could guess what came next.
When a big flatbed carrying a bulldozer arrived, their problems began. It took the morning to get the dozer started, and when they did, the loading ramps collapsed, dumping the heavy machine onto the pavement, gouging two deep divots into the street. By the end of the day, a crane truck hauled the dozer off the truck and a bylaw officer arrived to hand them a ticket for damaging the road.
On the second day, I fused the metal fence into a solid mass, and they needed an industrial metal saw to hack it apart. An engine fire destroyed the dozer. The workers assigned to clean up the elm tree and stones doubled over and tossed their lunch onto the grass.
Day three brought Troy and Justin back to see what the problem was. Troy lost a loafer in an unseen mudhole and Justin stepped on a nail. Their BMW wouldn’t start. The contractor drove them to the hospital to get Justin’s foot attended to and a cab dropped them back at the worksite after the contractors had gone home. I watched as they entered the site, carefully examining the ground in front of them.
Troy put his hands on his hips. “This renovation is costing us a fortune, and the demolition crew quit.”
Justin shrugged. “So, hire another crew.”
Troy shook his head. “No one wants to work on this site. They say it’s haunted.”
His partner turned and put his finger in Troy’s face. “That’s bullshit. There is no such thing as haunted. It’s bad luck.”
At that moment, a pigeon released its load, striking Justin’s shoulder, leaving a dripping white and grey stain on his black suit. Troy ducked, but the offending bird was long gone. In the distance, a flock of pigeons circled the block, setting up a bombing run.
I cast a leap spell and hopped the fence, almost landing on their toes.
They stumbled back.
Troy recovered first, dividing his attention between the circling pigeons and my sudden appearance. He glowered at me. “How did you do that?”
I smiled and waved the pigeons off. “I was a champion high jumper in high school.”
Justin joined the conversation. “You’re the guy next door.”
I nodded, and let the pause stretch into the uncomfortable zone.
Justin shifted his weight onto his other foot. “Do you know anything about this house being haunted?”
I smiled. “Haunted no, protected yes.”
Justin took a cigar from his pocket, and Troy asked. “What do you mean by protected?”
I reached towards Justin’s cigar and lit it with the flame that appeared at the end of my finger.
Justin and Troy looked at each other, then back to me. They spoke simultaneously. “Oh Shit.”
When I pointed my finger at them, they cringed. “Gentlemen, it’s time you sold me this house.”
Troy sneered. “Sure. Two hundred grand.”
I shook my head. “Twenty grand.”
Justin yelled. “Are you crazy? That’s what we paid for it.”
I created a six-foot deep, ten-foot-wide ditch around us with a dig spell, then used a leap spell to abandon the island I’d made. “I’ll give you gentlemen time to talk it over.”
Troy and Justin stared at the ditch, then at me, then back to the ditch.
I stood with arms crossed, admiring the back of my fingernails and whistling a tune my mother taught me.
“Hey, fella.”
I whistled the second verse.
“Buddy, can we talk to you?”
I considered conjuring an alligator in the ditch to encourage a positive decision.
“Okay, okay, okay. You can have the place for twenty thousand. Let us out of here.”
I conjured a bridge across the ditch and they scuttled across, scampering to their car.
I rented the house to a young couple with two kids with the understanding they would tend the graves. On the anniversary of their deaths, I summon Charlie and Bud’s spirits so they can walk the neighborhood together for one night.