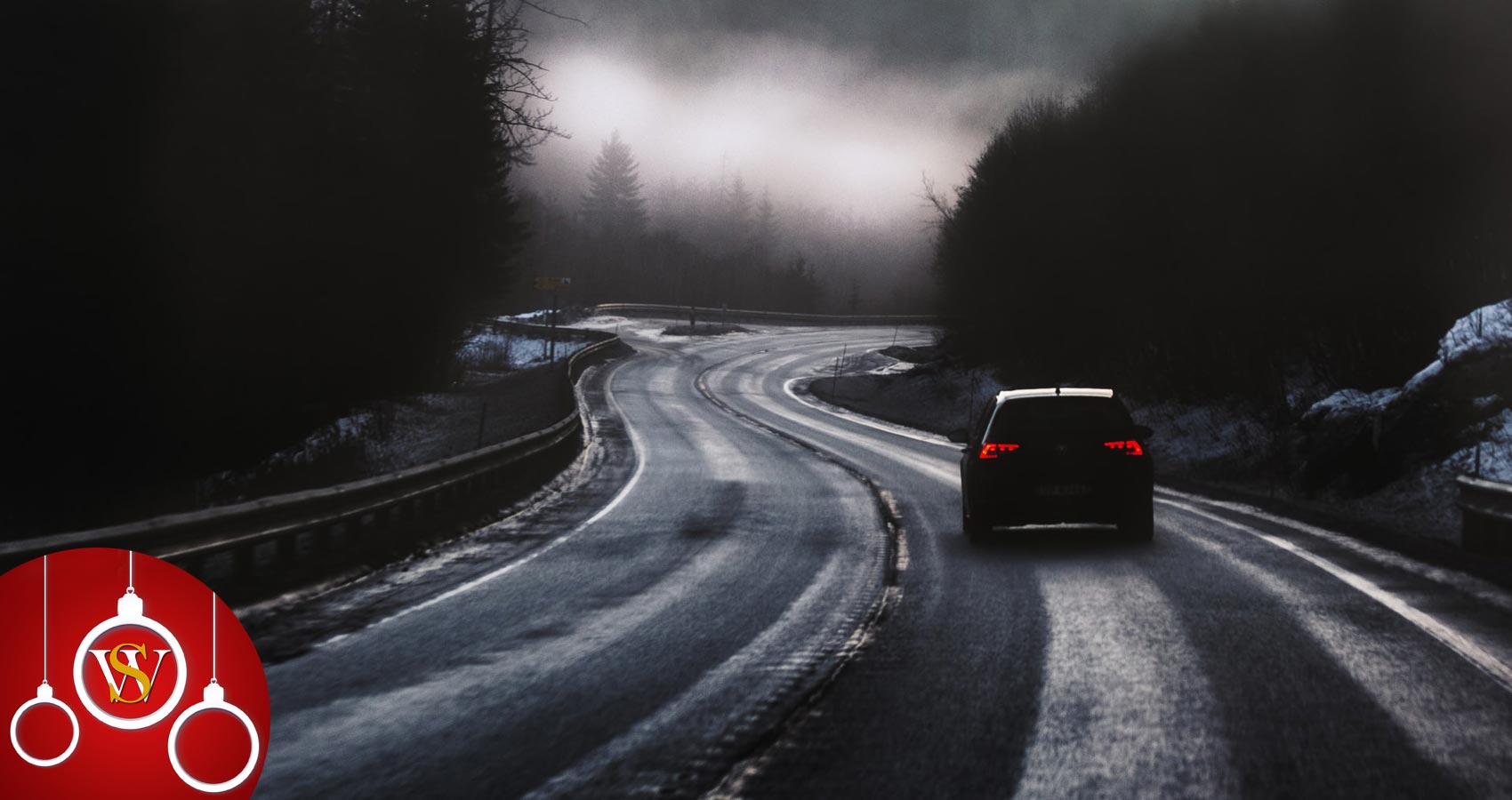 He couldn’t remember when. Silence was good. He should be home soon. He rubbed his eyes and cracked his window, allowing a blast of frigid air to shock him awake. He shivered and stared at the barely illuminated triangle of snow-coated road up ahead. It was getting blustery out there. “Blustery.” He chuckled. That was a word he hadn’t heard in a long time.

This felt so familiar. This abandoned stretch of highway. This storm. He rolled the window back up. He was freezing. And still tired. It seemed this trip would never end. This endless Christmas Eve. How long had he been driving? He glanced at his watch, tapping on the cracked face.

The snow picked up, pelting the windshield, and Marty switched the wipers from intermittent to steady on the highest speed, cussing himself that he hadn’t taken time to replace the dry-rotted rubber wiper blades. He peeled another paper towel off the roll he kept in the unoccupied passenger seat and leaned forward to swipe at the fog on the inside, then angrily wadded the paper towel—a decorative holiday roll–tossing it into the growing pile of paper towel balls now overflowing from the floorboard up into the passenger seat. A floor filled with wads of white paper covered in judgmental snowmen’s faces staring up at him. He was surprised to see there were still so many paper towels left on the roll. Damn his incessant procrastination. He’d meant to have his defroster fixed a while back.

Visibility was nearing zero, so he switched to high beams. The headlights glared against the wall of falling snow which made it worse.

He couldn’t wait to get home. He glanced over his shoulder at the oversized package hogging the entire back of the car, wrapped by the good folks at Baby World—white sparkly paper with tiny red Baby World logos every so often and an enormous red bow, shaped like a baby bootie. He knew it was cheesy; but Julie would love it. It had briefly entered his mind to covertly assemble the gift in the garage that very evening so when they arose early tomorrow morning, he could act surprised.

“Look what Santa brought!” he would tease. The look on her face when she saw the crib—the white Jenny Lind with solid wood spindles they were saving to buy—would be priceless. It took three of them to wrestle that monster into the combined back seat and cargo area of his rusted-out hatchback. It was worth all the overtime hours he had worked. He hoped the camera had film in it for the priceless Kodak moment.

A looming shape suddenly leapt onto the road. Marty slammed on the brakes. The car slid and he turned the wheel into the skid, the opposite of one’s instincts, just like his mother had taught him on those blustery afternoon driving lessons when he was a junior in high school way back …

He righted the trajectory of the car, steering it back onto the road, counting his lucky stars. That is when he broadsided a lone buck staring into the oncoming headlights. A deer in the headlights. “Blustery,” he thought. Then darkness.

He couldn’t remember when. Silence was good. He should be home soon.