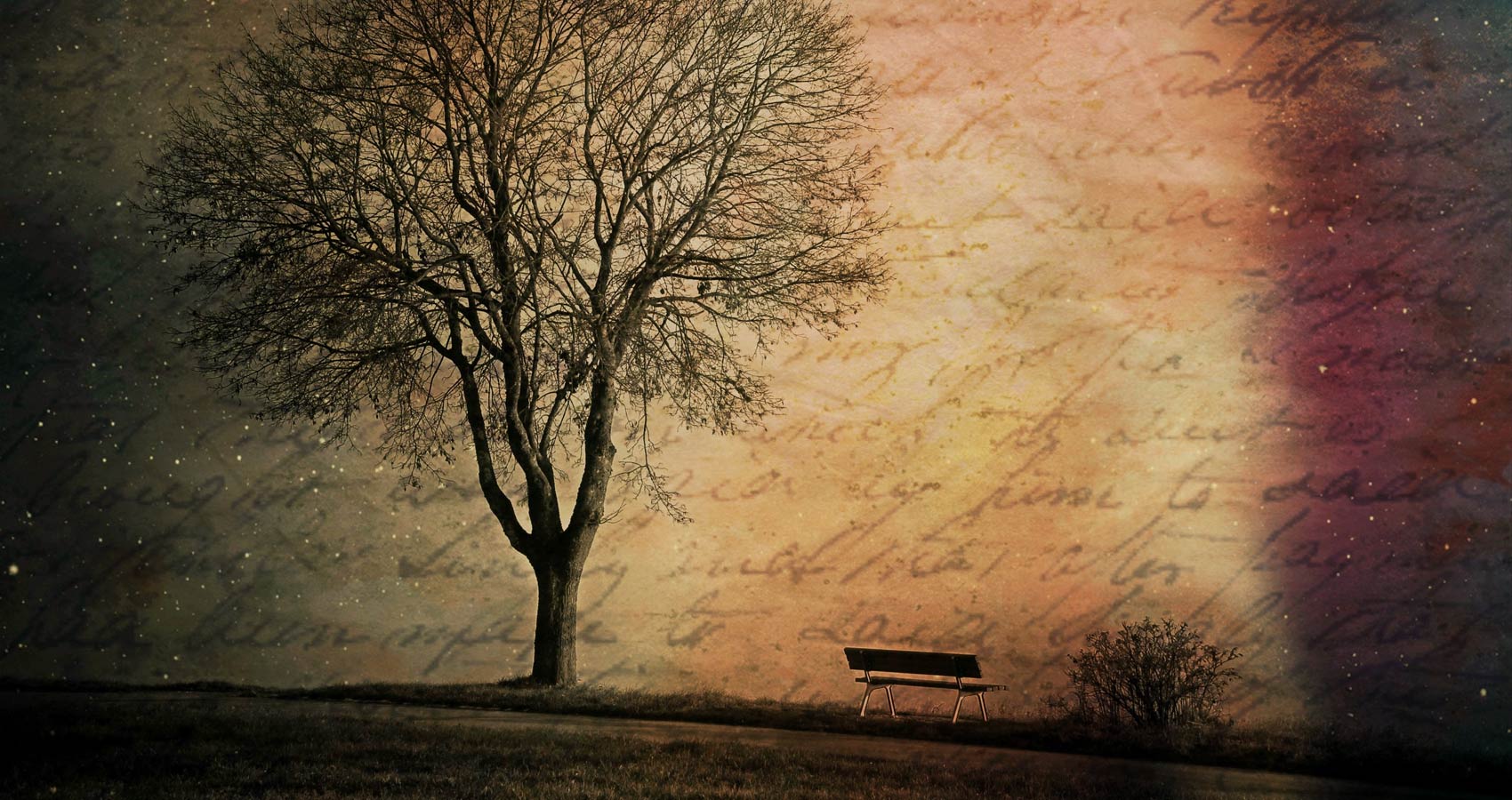 Under The Big Oak Tree

Under The Big Oak Tree

“There it is!” exclaims Francesco, stopping in his tracks. Just behind him, Pietro stops and turns, following his gaze. At the northern tip of the park, an old wooden and cast-iron bench rests in the shade of the big oak tree.
“Are you ready?” asks Francesco, indulging in a bright smile that brings out every wrinkle on his face.
Pietro hangs the cane on his left forearm, takes off his glasses, pulls out a handkerchief from his trouser pocket, and cleans his lenses. “It looks like an ordinary bench to me,” he says, putting his handkerchief and glasses back in place. “An ordinary bench and also rather shabby,” he continues, arranging the grey fedora on his white hair with his right hand. “It’s semi-destroyed. There is only room left for one person to sit. It looks uncomfortable too.”
“You have to trust me,” replies Francesco. “You’re the first one I’ve talked to about it. I discovered it by chance, months ago. And I was afraid that maybe if I told others, the magic would fade away. But for you, my friend, I want to take the risk.” Francesco lowers his gaze to the ground, then raises it back towards Pietro. “Nothing lasts forever.”
“Neither do we,” mutters Pietro, resting his right hand on his friend’s shoulder. “Yeah, neither do we,” smiles Francesco, placing his hand on Pietro’s.
“Tell me again how it works.”
“Did you bring the photo you told me about?”
“Here it is,” answers Pietro, pulling a worn black and white photo out of his jacket pocket. A boy and a girl hold hands sitting on the front bonnet of an old Fiat 600. On the back, a date is written in pen: 14 November 1957. “That’s all I have left of her; it was taken a few days before she left. Her father had lost his job, so they had to move to Switzerland in search of fortune.”
“It’s perfect. You need something to bind you to the moment you want to find. Look at her, hold her tight. Chase that moment in time. Then close your eyes.”
“I wish I could believe you,” admits Pietro. “She was so beautiful,” he sighs. “I only had eyes for her. I was seventeen, and the world was at my fingertips; the whole world except her. She was the only one able to intimidate me; to make me doubt myself. She had never given me the time of day until that day. We were in the square, on the evening of the village feast. There was no particular reason. She just walked up and smiled at me. And I realized that I had found what I was looking for, even though I didn’t know what it was. One of those feelings that you only get a few times in life, and only if you are lucky. It would be nice to experience it again,” concludes Pietro, slipping the photo back into his jacket pocket.
“Come on, then, what are you waiting for?” Francesco urges him, smiling. “Believe me, my friend. Let’s go.”
Pietro smiles in turn, then nods his head. “Let’s go!”
A young brunette comes running up and stops in front of the bench. At first, she breathes in and exhales deeply a couple of times, hands on her hips. Then she places one foot on the edge of the backrest and stretches out one leg, leaning forward with her torso—a few seconds the other leg.
Francesco and Pietro, motionless, unable to breathe, stare at the bench as if the only escape route from certain death has collapsed before them.
The girl notices them and turns around. “What’s the matter, grandpas, never seen a pair of leggings?” she blows. She flexes her neck to the right, to the left, and starts running again.
Francesco and Pietro’s eyes seek each other. “What are leggings?” asks Pietro.
On the path, a man advances at a fast pace towards the bench.
“He has a newspaper!”
“Run, go!” yells Francesco.
Pietro sprints forward but must immediately relieve his back with one hand. He helps himself with the cane – come on, faster! – following the approaching man out of the corner of his eye, now close by. Just a few more steps. Three. Two. One. Yes! And the bench is his.
Pietro sits down, leans his cane on the armrest, and heaves a sigh. He glances at Francesco, who looks at him from over there, smiling happily. He immediately pulls the photo out of his jacket pocket, holding it between the index finger and thumb of both hands. He looks at it for a few moments, then closes his eyes and bows his head backward.
“Do your magic,” pleads Francesco in the distance. “Give life to his memories, rewind time!”
Pietro gasps with a shudder. He opens his eyes, pokes his arms out, and stands up. “I am Pietro,” he says, while the lights of the feast light up the night and illuminate the smile that has appeared on his face. “May I have the honor of a dance?”