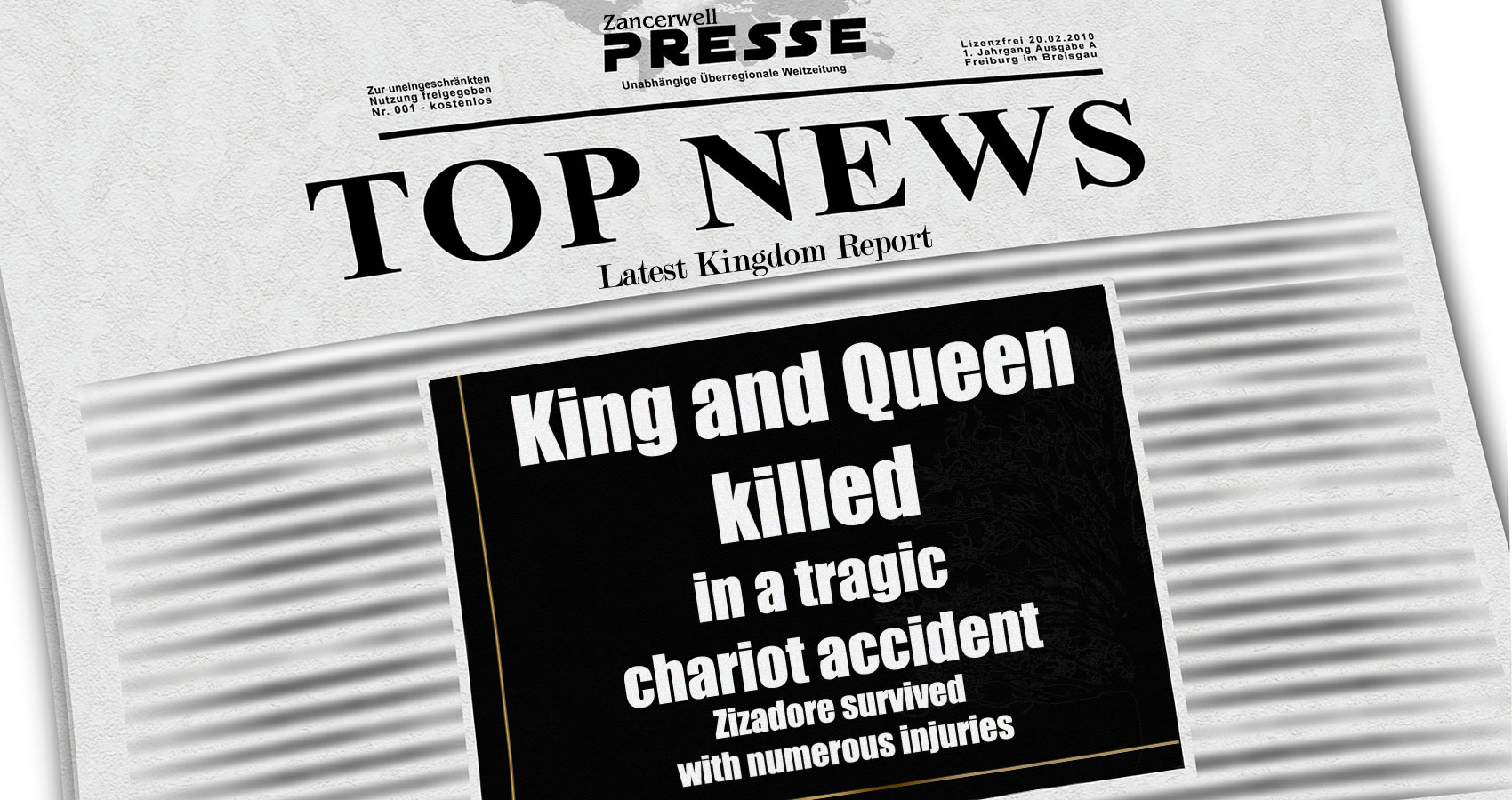 DEATH OF MAGIC, DEATH OF KINDNESS

It wasn’t long before the news spread that the King and Queen of Zancerwell were dead.

Waiting impatiently in the dance recital hall for Zizadore were all the dancers and most of the kingdom in the audience.

Lady Pinkerton, teary-eyed, walked slowly to the center of the stage.

“I am deeply saddened to report that Queen Zelda and King Zack have been
killed in a tragic chariot accident. Zizadore thankfully survived with
numerous injuries and will not be able to perform the lead role, which will now be performed by Princess Damiana, according to what the queen’s
wishes would have been–”

The audience reacted with grief-stricken cries and several faintings. This would be the worst day in the history of Zancerwell so far.

Demonia, sitting in the audience, feigning shock and grief, dabs her eyes with a tissue, a small smile on her face.

Onstage, Damiana starts dancing across the stage, thrilled to be dancing the lead role.

The world came to an end for Zizadore, lying in a hospital bed, her left leg bandaged, and the other, too unbearable to acknowledge, especially for a dancer.

Zizadore finally wakes up and attempts to jump out of bed. She screams, horrified. She’s paralyzed. The living nightmare begins, knowing her own aunt tried to kill her. Now in some kind of prison of white walls and silence.

In the darkness, she wondered why there weren’t any doctors or nurses or visitors. Only her grandmother, Zizi, at the foot of her bed, sobbing uncontrollably.

Maybe this is hell was the only thought to fill Zizadore’s soul as she fell back into nothingness, unconscious.

In some prophetic dream, Zizadore had some intuition– the ladder was there, the mountain she had to climb– but how?

Days later in the Royal Cemetery, a despondent Zizadore watches her parents’ coffins being lowered into the ground, she leans from her wheelchair to place flowers on their graves, helped by Damiana.

The villagers are overwhelmed with grief, weeping, in a long procession to place flowers at the gravesite as the wind wailed its own outrage.

Within days, in the cathedral on Castle Hill, the bishop raised the crown and placed it on Demonia’s head, handing her the Sword of Justice.

The villagers, still grieving the loss of Zelda, struggle to raise their voices.

A flock of ravens flooded the cathedral, causing a commotion, swooping and pecking at the villagers’ heads.

Damiana sat in a gorgeous gown and on the opposite side
sits Zizadore, in a wheelchair, her head bandaged, one leg missing. She stares up at the proceedings in shock and disbelief.

Through the window Zizadore could see the rain turned to blood, staining angel white cobblestones red.

On a bright morning, Queen Demonia decided to hold a press conference, holding up the Sword of Justice. The Royal Detectives stood behind her.

The villagers are gathered in front of the castle.

“The Royal Detectives have determined that the cause of the King and Queen’s death was the use of magic, witchcraft or sorcery conducted by the
king,” declared Queen Demonia.

The villagers reacted, whispering to each other.

Now in her bedroom in the castle, Zizadore heard the words through an open window. Her bandaged face became wet with tears, now a scar in the shape of a “Z” gleamed on her cheek as an ember from a lost fire.

Zizadore propped herself up and moved a few inches closer to Demonia’s voice.

“In light of this discovery, I hereby decree all acts of magic, witchcraft, or sorcery to be an act of treason, punishable by public beheading with The Sword of Justice.”

“No, not the King, it was Demonia! I saw, I saw!” exclaimed Zibbles.

Zizadore, too devastated to hear any more sobs into her pillow.

That afternoon, Damiana appeared in Zizadore’s doorway with her belongings, with servants following her.

“Remove all of Zizadore’s belongings and move them to her new quarters.”

Zizadore sat up as if waking from one nightmare to enter another.

“What are you doing?”

Damiana smiled her sinister smile. “I’m moving in and you’re being relocated to a more appropriate room for your new status. Follow them in your wheelchair if you want to have a bed to sleep in tonight.”

The servants quickly take all of Zizadore’s clothes and belongings and pack them into boxes, and carry them away.

Zizadore was still in too much shock to do anything but limp to her wheelchair and with the help of Zibbles and Zolly, moved the wheels of her future slowly, creaking, rusting, down the hall leaving Damiana to bask in her victory, after all.

“Now things are as they should have been all along.”

In the master bedroom, Demonia has already settled into her new life and is sorting through the royal jewels.

“All for me, none for anybody else.”

More servants are removing all of Zelda’s and Zack’s belongings.

One servant whispered to another as they turn the corner-

“Last week I was an economics professor and this week because of
education budget cuts, I’m a servant again.”

Down a dark hallway, Demonia is wheeling Zizadore in her wheelchair, her body covered in a blanket made of zunnies, stopping at the storage closet and opens the door, rolling Zizadore into her new room.

“What am I doing here?” asked Zizadore.

“This is your new room,” said Demonia. Everything should be to your liking as you no longer have a choice. I’ll come to get you in the morning so you can start your daily chores of cleaning, cooking and overall maintenance of the castle to my specifications! Too bad you won’t have time for school and if you dare practice magic again, you will be put to death.”

Demonia laughs then leaves, locking the door behind her.

Zizadore looks around dreary room lined with old books and boxes and a small wooden bed.

Zizadore lifts herself out of the wheelchair with great difficulty as Zibbles and Zolly appear from beneath her blanket. Zolly is now wingless and Zibbles is blind.

The blanket reshapes itself back into the zunnies who start hopping around.

Now without the bandage, we see Zizadore’s hair is short and black.

“We’re prisoners in our own home,” cried Zolly.

Zizadore catches her reflection in a dusty old mirror and begins to sing (and I hope you can hear the music in your imagination.)

Zolly makes an attempt to fly with one wing, crashing onto the floor.

THEN WHO WILL RESCUE US?

Zizadore leans over and picks him up, cradling her dearest bird. With a wisp of hope-

With new determination and strength, Zizadore finds her voice as a ceilingless sky song written for her.

“We rescue ourselves. This is the time for courage in the face of pure evil.”

Zizadore sees the magic stones on the wall suddenly light up in different colors.

She hops to the wall, trying to remember the secret code her father used.

“If ever there was a time for mad science and magic, this is it.”

She tries different combinations of codes on the magic stones with no luck.

She punches in the numbers. No luck.

The distant chime of the school bell means she must take a break from code cracking.

Zizadore hops to get dressed while Zibbles runs to a box of clothes, knocking into the door, then sniffing, and pulls out a selection of rags, all equally deplorable.

“Damiana apparently kept all my prettiest clothes and shoes for herself.”

In the window sits Zolly, shakes his head at Zizadore’s raggedy dress.

“You do not get outfit approval!”

Zibbles and Zolly hide as-

The door flies open and Damiana, dressed in a beautiful gown, sticks her tongue out at Zizadore, posing.

“See my beautiful dress?! I’m going to the Halloween Dance with
William Wellington and we are going o win Best Couple!”

“This is happiness to be me! And not you.”

A thunder of footsteps can be heard approaching, shadowing the doorway.

Demonia hands Zizidore a broom and three dusters, with a snort.

“Well, you can’t go to school. You have to clean the castle. Get to work. There will be a Black Glove Inspection at three o’clock sharp.”
Damiana takes this opportunity to ask-
“Can we go shopping for two more dresses? I’ll need at least two outfit changes during the dance.”

Demonia gives Damiana a picnic basket for her lunch.

“Of course. Enjoy your roast wunderbeast and caramelized vulture eyes, dearest girl. I’ll have the royal carriage pick you up after your ballet lesson, jazz dance lesson, modern dance lesson, and of course, your future dance lessons.”
Damiana smiles smugly at Zizadore before leaving.
“Get to work!” commanded Demonia. “And if there is so much as one speck of dust in this entire castle, no porridge for you!”

“That’s Queen Demonia to you!”

Demonia leaves as Zizadore looks at the broom and dusters.

“Couldn’t you fly out on the broom, old school style?”

“No, we’re going new school for this.”

This publication is part 3 of 13 in the series Zizadore