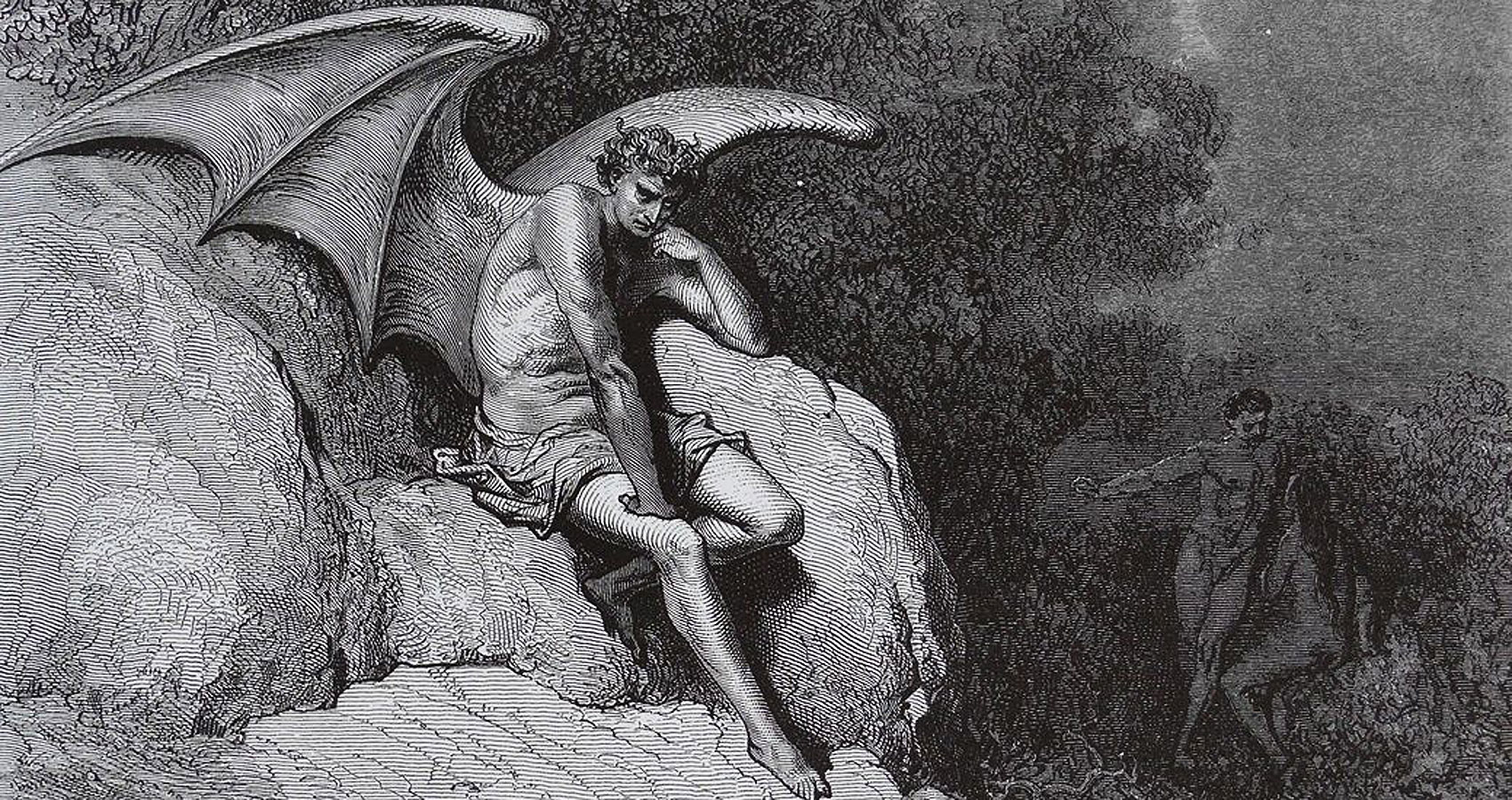 A rift has become a chasm, which widened and separated me from you, Earth from Heaven. Sitting on the cold earth, I look into the sky. I’ve grown tired from crying out to the Heavens. The stars are so far away seeming, a place I am no longer allowed. So many Earth years have passed with no response. If I could return to a time before, before the light started to wane, take it back, reverse it, I would. This is my desire, but not in my power, only yours! I go over and over it in my mind, fathom it differently, but nothing changes. You have shaped reality for us all. None of us wanted this – This! Some are toiling in fiery torment, some cast down and sitting contrite like me. I sit remorseful in the very place I landed, having been thrown downward ungraciously. My body touches the clay that they are made of, from which they sprang. I remember when my body was not flesh, not base like theirs. And I suppose you would want me to bow down before them here too!

Smaller now in might and form, I understand the consequences, the gravity of what I have done, that delict. In that moment, though, I would have struck you down with your own sceptre of righteousness, flung you off your throne, and grasped that crown to secure it firmly on my head! That crown could be thorns digging deep in my flesh, blood flowing, pain growing, but I doubt this sight of my suffering would make any reparation now. I would self-flagellate and lacerate my still strange-feeling earthly skin. I would, and will, if you will forgive me.

What I wanted, in truth, was a piece of the light. Not all of what you had, just a glint of my own to wield by myself. If I could bear the light, left-handed, swirling and deft, dexterous in the darkness, I would create the most beautiful light show! I would utilise the light for great works while in my charge.

The propitiation of you down here, these walking seeds after insufflation, once sown among the thorns and those praying, praying on bended knees—you would love it! I adjure you, solemnly and earnestly to give me back my place and rightful seat. I was a ball of angry flame and begging fury but now this is my fervent orison and sincere plea: return my wings to me! You say you have a plan but I know you don’t have this all prearranged and this was not your design; you are but a maintainer of what is. But, it came to pass that I was thrust downward. Here I sit, waiting in case on a whim you send a messenger to fetch me.

Down here, they live coveting their symbols, polishing gold and affixing flowers to shrines, but they’ll never reach you, the symbolised. They’ll denote and indicate, genuflect, prostrate themselves, but your essence eludes them. Icons and statues fill a space that is the absence of you. Their divine inheritance was squandered long ago. Now floundering, far removed from the light and they struggle with pain, temptations, and conflicted emotions. I am beginning to experience this too, in my physicality—I can feel my hate for you inside myself, thoughts and flesh intermingled and at the same time it hurts not to see your face! Feeling blood course through me, the effort of breath chill in my lungs. And pleasure is also pain, a reminder I am encased in skin, a pulp inside that cannot die without releasing me formless. Loving spirits do not condemn for eternity but can entrap! Thus I cannot end, cannot transcend, and the horror of what you have done to me is my pumping heart’s burden. You the wrathful one, but me the one blamed, the brightest light as always casting the darkest shadow!

I must admit I was impressed by your salvo of acts against me! Tooth and claw and hooves were not enough against you this time. You were incandescent with light and I was flaring with rage, two burning beacons we were! Who are you to say I am beyond redemption? What if I were to judge you and find you wanting? I could have a throne just like yours installed down here, a reflection of that above, burnished and gleaming in this grey rain-soaked world where even in day it is dim and shadowy. On the vertiginous heights of your glittering throne, in your glory most high, you know nothing of down here!

Unlike you, I did not try to bend your will to mine! I could have hurtled back up, forced my way in with hammer in hand, pushed past the sentinels at the gates, pearls scattered among those swine! I could have snuffed out all the light, re-positioned myself on the throne amid my own radiance.

If I were to appear as a great red dragon or a roaring lion or a gleeful slithering serpent, they may know me, see me as you do. And I would say sneering, “come forth my dears, come prick yourself on this thorn-bush”, but as your adversary, you must expect a more nuanced manifestation when the time is right.

When I am stronger with mounting power, I might change reality to a house with two rooms. There will be but one stairway upward but if you come down here you had better bring protections for it will be dark and dangerous. I will make it so! There will be no more casting out, not of my own house! I alone will rule now and here, here and now, light revealing darkness and darkness revealing light, everlasting and eternal.