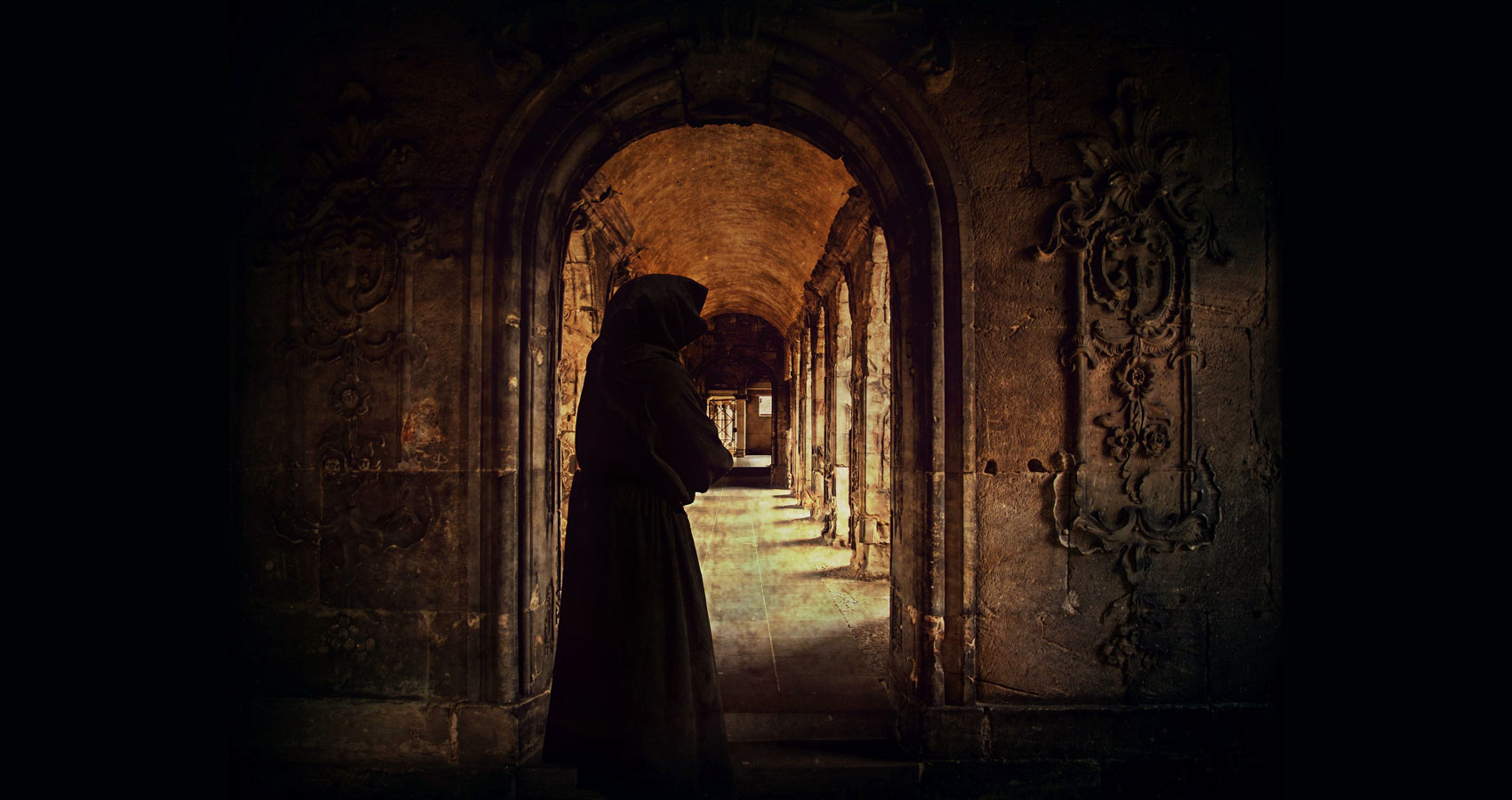 A Flutter of Fallacies

A Flutter of Fallacies

The freezing wind cut through his hooded face, the chill seeping through the marrow of his bones. His heart thumped the bellows of war drums; the fear of it exploding to shreds lingered in his mind, as he battled past swaying branches and overgrown shrubs attempting to trample him down. Fear and guilt fueled his dismayed flight, driving him beyond bodily limits. The lulled silence of the starless winter sky was broken only by the rhythm of approaching footsteps, heavy despite the thickets of foliage, and his heaving breath that echoed the terror in his eyes, almost turning them into the pale white of the dead. The barter he set himself up was the price — his life or its freedom.

Only hours before the night gradually set it, when the wind only whispered, he made a hard choice. A choice that sealed his fate. An eternal entrapment of his necessities.

His brother lay at the doors of death. Festering scars that shattered dreams and proudly brandishing them as medals of the war. The war ravaged a smoldering fire, consuming everything in its wake. The numbered survivors were the heroes that basked in glory. Death overshadowed all glory, those dead would have been pleased, lulled into the long slumber away from the glimpses of despair. The worst prevailed in the world of living, those that endured the wounds but were forgotten — unsung heroes who spiraled into a dark abyss. For them, the smell of victory turned to venomous fumes, choking them to a slow, prolonged death. The mumbled screams of agony drowned in his brother’s throat, perceptible to naught but seeking ears, stirred in him a pale chill of utter helplessness.

Unable to resist the guilt strangling him from within, he vowed to himself — to do what is just, even if it was so only to him. Commoners in the egoistic bustle of everyday life owed their very existence to his brother’s kind. Yet, with the war over, hardly a soul passing paid heed to their saviors once the danger went past. A last dreamless slumber devoid of agony is the least that his brother deserved.
His desperate savings gathered naught but three coppers. The war drained them of wealth like a leech sucking blood out of veins. Three coppers would never suffice. The truth of it stung, numbing him. He sighed to himself. ‘Whatever be the price’ echoed in the back of his mind, somehow instilling in him a resounding strength to carry on despite clouding obscurities.

The dark brown robe cloaking him radiated an aura of a grave melancholy, bearing testimony to the perilous times hovering over him. With heavy but silent steps, he pained his way through the meandering crowd into the corridors leading to the healers’ chambers.

The medicine man looked up; his deep set blue eyes spoke with a serenity that only watching deaths molded in a man.

‘What is it that you are seeking?’ His voice crisp, emotionless.

‘I am looking for a potion that would ease the pain of my brother’s wounds from the war, perhaps help him sleep. His pangs of pain, even in sleep are too much for me to bear.’ His eyes were gleaming with a pride, striving to seek a moral authority for his cause.

‘Milk of poppy would suffice.’ The medicine man handed a small bottle containing a light, translucent liquid. ‘Seven coppers for this.’

He reached his right hands to his pockets, knowing full well that he only had three. The stretched hand opened its palm to reveal only three. The hand bearing the bottle suddenly tightened its grip and retraced. A disdainful scorn looked at him, one that would drive away an expectantly drooling dog at the doorstep commanding it to leave for good.

‘This is all I have.’ His eyes pleaded more than the words he spoke.

‘Three won’t do. Pay seven or leave.’ The authority in his voice was cold.

‘Please sir, have some mercy. The wound he bares is for the land we are living in. The life ebbing out is the price to hold our peace and freedom.’ The desperation never left his begging eyes as he uttered the last cry for compassion.

‘The war is over, boy. Everything that bore its mark is reduced to dust. The land beneath my feet is going nowhere. Return when you have enough coppers, there would be plenty who would pity on your brother’s cause. My shop is no place for pleaders or parasites.’ The final word struck the fatal blow to the last iota of innocence left within him.

The unknown surge of rightful spite that subsequently gripped him, even he could not comprehend its origins. Time visibly slowed down, his actions no longer under the power of his will. Buried deep within the forgotten chambers of his psyche, he screamed an unheard shriek of a rabid vengeance for justice, where the medicine man embodied all that is vile and evil in the world of living. His involuntary eyes watched helplessly as his free hand unsheathed the dagger hidden beneath the hides of his robe. The effortless, almost rhythmical to the poetic justice it sought to serve, cutting beyond the veils of exasperated gasps of the medicine man, smeared the reflecting steel with dark, warm blood. A scream of pain shuddered the empty corridors as the inconsiderate arrogance of the medicine man fell with him. Spikes of frosty chill travelled up his spine, numbing his limbs with it. Guilt clouded his reality, blackening it at the erroneous magnanimity of his actions. The innocence left a dying wisp in the air.

Quickly he grabbed the bottle bearing the elixir that would serve as the unpaid debt for his brother’s wounds. Luck blessed him with solace for no one was in the vicinity. He stealthily walked out and headed to attend to his brother.

The demons holding the strings of his fate were laughing at his face when he reached home. The bottle bearing the potion fell from his hand as his grip loosened. The shattering glass echoed the disbelief settled in his eyes. The brother of his was no longer breathing, the calm on his face said of his peaceful passing.
Banging fists at his door shook him back to reality from wandering illusions. Fear corrupted the blood flowing in his veins like dark sewers emptying into flowing rivers. As he peeped through the slit, his fears could not be truer. An old lady, pale as if the grief was black fever, stood with eyes dead as wandering ghosts. She was surrounded by keepers of the law, all dressed in their unforgiving black that bore the mark of a bloody red hammer where the heart lay. The unwavering flood of questions gushing to his mind had found their answers. He had to flee.

The flashbacks were painted in occasional glimpses as he panted heavily for breath. The lonely figure pursued by the guards in the black of the night was approaching its inevitable end. The dwindling thickets, once sheltering his devilish course, opened up to the edge of the cliff overlooking the endless sea beyond. The heavy footsteps of his pursuers closed in, its sound only challenged by the crashing of the waves beneath. He calmly acknowledged the approaching end.

In the serenity that settled in him, clouds of guilt blanketing his wits were torn apart by the resurrection of his subdued intentions. His erroneous past, shrouded by the flutter of fallacies of fate was beyond the realms of his will. The acceptance, devoid of remorse and spite, started sinking in. This life of his would not end at the hands of lost mortals wandering the endless labyrinth of their myriad existence. The sea of tranquility was yearning out to him.

Death came to him wearing a wicked smile.

Smiling back, he flung himself to the call of the welcoming waves beneath.

A twenty-three-year-old fantasy addict who sees the world through the eyes of a four-year-old, wishing that magic was alive in the real world as it were in books. Till the day it actually happens, he chooses the harmless company of goblins and dwarves in medieval inns, sipping ale and weaving tales. And of course the occasional hiccup in between laughs.

Latest posts by rickylahkar619 (see all)

And The River Emptied And Silver Stream Awoke

And The River Emptied And Silver Stream Awoke written by: Lance Sheridan @PlaitedPoems   In a thirtieth moment water knelt...