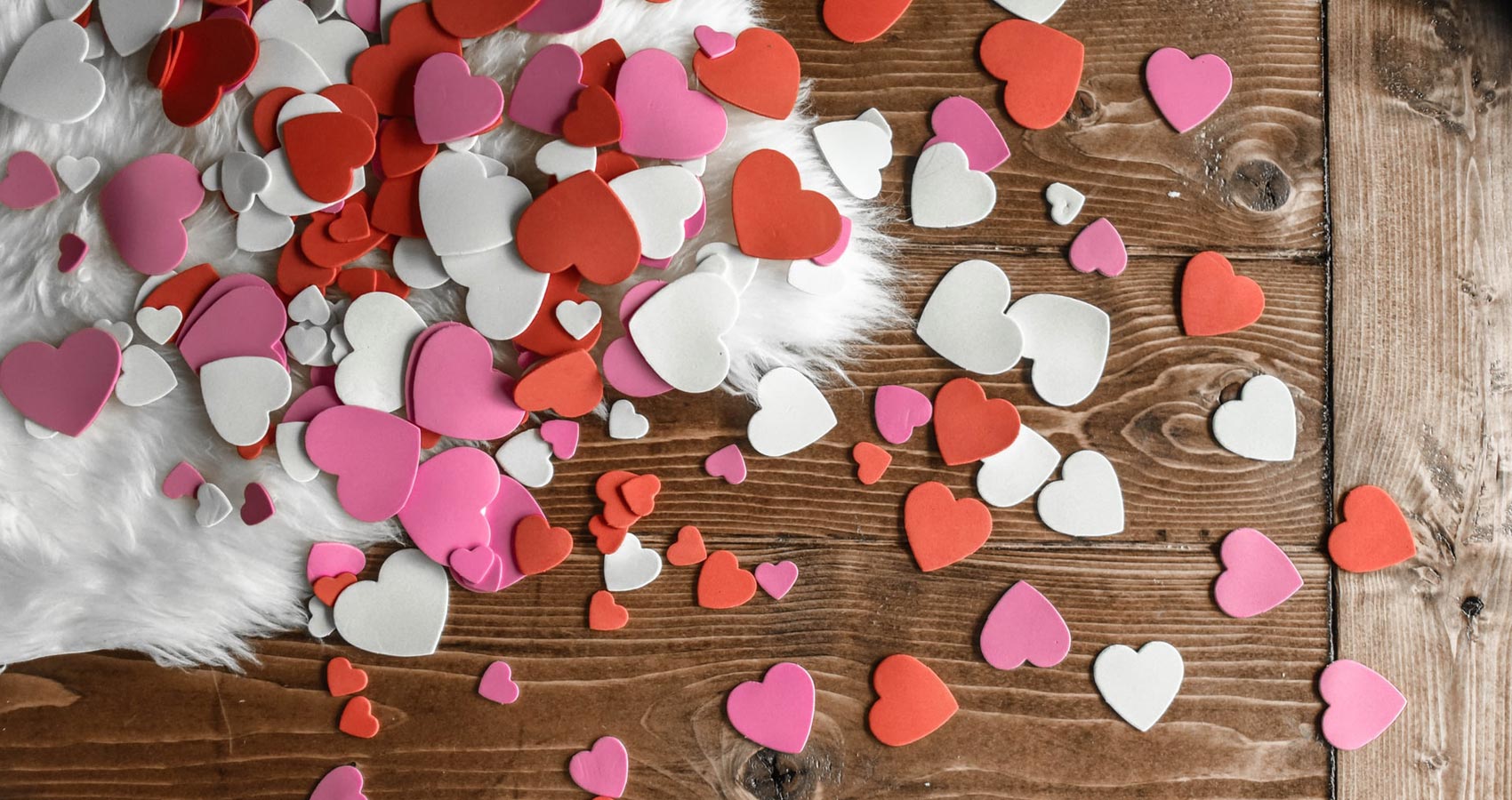 Wondering what I had done to deserve such an onslaught of sudden attention, I felt slightly honored at the appearance of the first few hearts. Perfectly cut out from newspapers, magazines, or out of old wrapping paper and usually no bigger than the palm of my hand. Most were pink and red, white and sometimes purple and yellow, a few even cut from lace fabric. Some would have a single word written on them or even a few words circled when they were cut from something that already possessed written words in the background. I adore you. Beautiful. Lovely. Sacred. Apple of my eye. Heart You. You are everything.

The notes continued through the month of January. I would find them in my mailbox, on the sidewalk in front of my home. But then everything changed. Where I would find only one heart per day, then ten, even fifty or a hundred or more would be discovered. Tucked under my windshield wipers on my car in the driveway and then on my front porch with the front corner being held down by a heavy leg of a patio chair. The questions swirled in my mind. Who knew where I lived? Was this from someone I knew? I realized how anxious I was feeling every morning when I woke up. I was worried about when and where I would find the next heart. At first, I had felt flattered by all of the attention. By the 12th of February I needed to involve law enforcement.

I left my front door promptly at 7:30 a.m. to ensure I would arrive at work on time. When I turned on my car, I immediately adjusted the temperature controls. Hundreds, maybe even thousands of tiny hearts were expelled from the air vents on the dash. Sticking to my eyelashes, my lip gloss, and covering my clothing, I was frozen in place. Shutting off the heat to stop the shower of hearts, I immediately locked my car doors. I was not about to step out of my car in my driveway as I felt that I would be out in the open and vulnerable.

Once I gathered myself and shook off as many hearts as I could onto the floor boards, I drove to work. Crying the entire way there, my makeup ran to my chin. I called my boss on the way and asked him to meet me at the door and escort me into the office. As I exited the car, hundreds of hearts were caught in the wind and followed me out of the car. Being a man of his word, my boss jogged across the lot towards me. Confused, he assessed the situation, didn’t ask any questions and pulled me close as he escorted me into the office. Sitting with him as I called the police, he provided me with water and tissues. The police arrived quickly and took my statement. They asked if I felt safe in my home, and my boss assured me that he and his wife would escort me home and inside that evening. He had even promised to meet me in my driveway and follow me to work the next morning if needed.

Chuck and Beth had always watched out for me and taken such good care of me in my time of need. An amazing boss, his wife was also like a second mother to me. A man of his word, they escorted me home that evening and Chuck walked the inside and outside perimeter of my duplex townhome as Beth made a pot of tea and helped warm leftovers so I wouldn’t have to think about cooking. Spooked, I appreciated their kindness and their ability to restore calm.

While still quite nervous, I found myself surprised that I slept well that night. Waking the next morning to the sun peaking through the curtains, I heard an unfamiliar noise in the air ducts in the bathroom. I stood quickly and went to the bathroom but stopped in my tracks to place my ear against the door. What was that? A fluttering? Not even sure how to describe it, I slowly opened the door and turned on the light. Nothing. I didn’t even hear the noise again once I was in the bathroom and the light had been turned on. As I finished brushing my teeth, I opened the shower door to turn on the water. Taking a few moments as the water warmed up, I reached for my vitamins and ran a brush through my hair and turned on the overhead fan. Small pink hearts showered me from overhead. They continued to pour out of the fan grates on the ceiling, touching my eyes and even falling in my agape mouth. Standing in disbelief, my reaction time wasn’t what it should have been. Reaching into the shower, I shut off the water and turned off the fan on the far wall. Running back into my bedroom to grab my gym clothes sitting on the chair next to my bed, my heart threatened to burst out of my chest.

Racing to my car still wearing my robe and pajamas, I continued to stuff my gym clothes and my tennis shoes into my bag while trying to shuffle my purse, phone and keys at the same time.
Unlocking my car, I was frozen in place as I saw a single long stem rose and a large red heart under my windshield wipers. Yanking open the car door, I threw everything in the car and grabbed for the rose and the heart in one fell swoop. Catapulting myself into the front seat of the car, I locked the doors and pulled all of my belongings out from under me that were strewn across the front seats.

The name on the front of the heart was Ivy.

Inside, it read- I adore you, Ivy. Will you be my Valentine?

My brain was struggling to catch up. My name wasn’t Ivy. But my neighbor’s name was Ivy. A quiet, petite blonde who was kind, but I didn’t know much about her. She and I exchanged pleasantries when we saw each other in passing, but that was about it. Ivy. All these hearts, were meant for Ivy? Never me? Did someone mistake my side of our duplex townhome as hers? If they were meant for Ivy, was it still something beautiful and flattering and less terrifying?

I sat for a few minutes and collected my thoughts. I needed to check in with Ivy. I was still wearing my robe and pajamas, but at that point, it didn’t matter. As I exited my car, holding the rose and the card, a man exited an HVAC work truck across the street. Approaching slowly, I observed that he was carrying a large bouquet of roses and a confused look on his face.

“Why are you holding the heart and the rose I put on Ivy’s car?” The man asked slowly.

“On Ivy’s car? You put them on my car! What? I… Your hearts were on my front porch. And my sidewalk leading to my front door! Those hearts came in my car heater vents and through my ceiling bathroom vent! What are you talking about?!” I shouted much louder than I intended to.

“Oh no. Oh. No. I am so sorry. I thought your side of the duplex was Ivy’s. I must have got it wrong. We talk and text and facetime and I must have gotten the house info messed up. Oh my gosh. Ivy doesn’t know any of this.” His face fell as he apologized.

“No, she doesn’t know any of this! All those hearts. You terrified me. I thought I had a stalker! I even called the police! This isn’t normal. What you did isn’t okay. You are seriously crazy if you think any woman would like this!” At that point I was yelling and couldn’t contain my frustration.

“Ivy told me she loved hearts so much. Her dad died last year and he used to put heart notes in her lunch bag each day when she was a kid to remind her that she was loved and special. She said it was something she missed. I have really fallen hard for her after talking with her all these months and I wanted to show her how much I cared for her. I am in the business of heating and cooling and I thought it would be fun to shower her with hearts the day before Valentine’s Day. I used one of my ladders and crawled up early this morning and easily found the bathroom vent and put it on reverse. But it wasn’t her vent. I was yours…I am so sorry.” He looked mortified.

“Verify an address next time.” I scoffed as I handed him the rose and the card that was mistakenly placed on my car. “And come back later and fix my vent. Go. Go and bring her the flowers and ask her out.”

“I would say it was nice to meet you, but frankly, it is not.” I replied as I turned back to my car to gather my belongings and return inside.

My brain swirled and then I realized I still needed to get ready for work, make a plan for cleaning up the disaster in my bathroom later on in the day and tell my boss that everything was fine. I about lost it when I realized I had to also call the local police and explain the serious misunderstanding. They might not even let this drop. The whole situation was like something out of a true crime news special.

As I left my home a second time, I saw Mike walking back to his work truck smiling from ear to ear. And then I heard Ivy on her front porch holler to him, “Thank you, Mike! This is going to be an excellent Valentine’s Day.”

I smiled at Ivy when she realized I was standing next to my car. I waved to her and she waved back as we always did. “Have a great day, Ivy.”

Bless it. I hate Valentine’s Day.

Kelli J Gavin of Carver, Minnesota is a Writer and Professional Organizer. 400+ pieces published in over 50 publications. “I Regret Nothing- A Collection of Poetry and Prose” and “My Name is Zach- A Teenage Perspective on Autism” were both released in 2019.