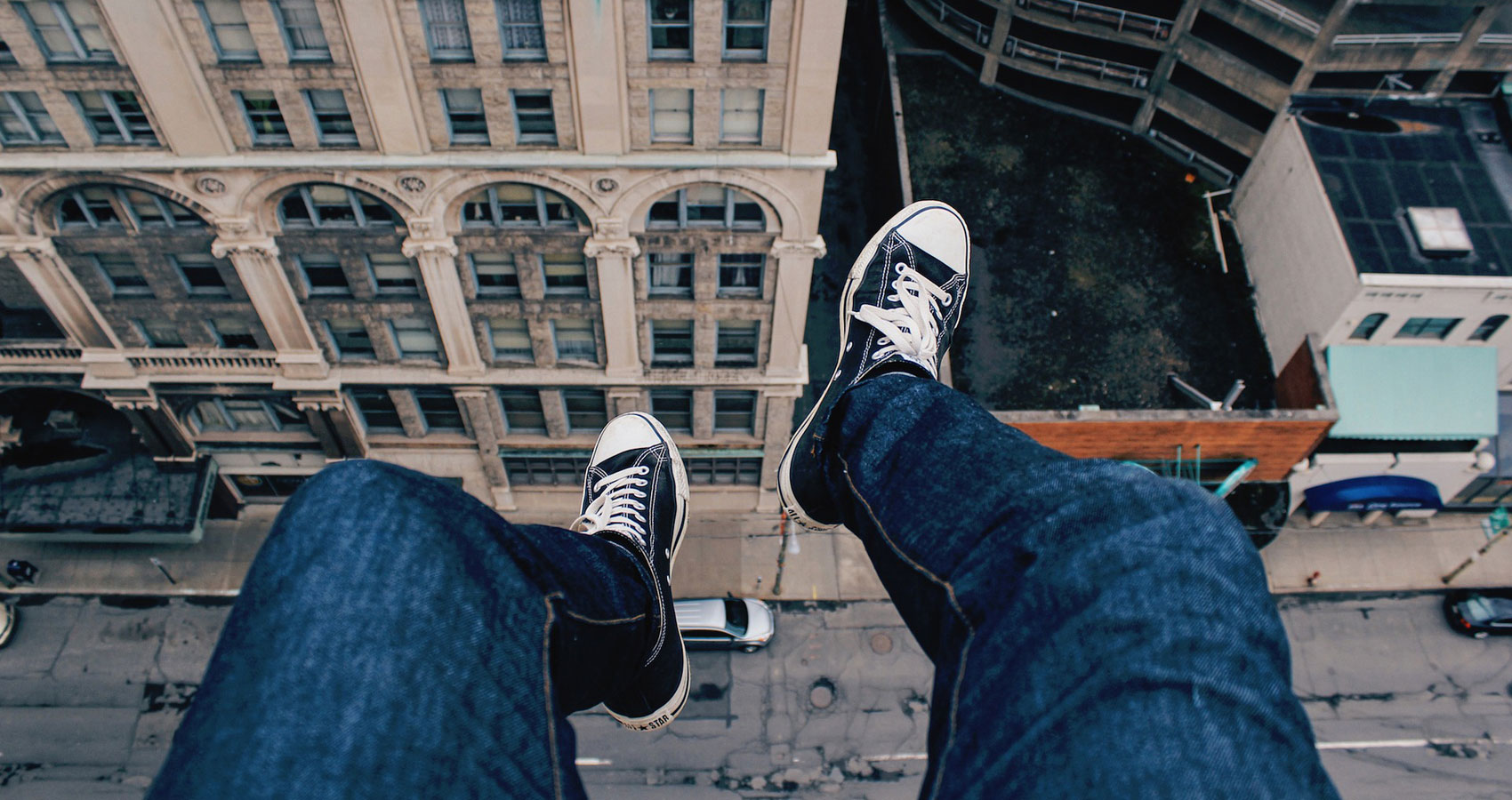 He was standing there – on the edge. The wind blew against his face, moving his long hair to the sides. His legs were shaking. He moved one of them over the edge. His body started to swing. He tried to find his balance. Somehow he balanced himself and stepped down from there and took out his phone. He double-clicked on the Facebook icon. He typed something and slid his phone back into his pocket. He climbed on the edge, again.

He was standing there – in the middle of the road. It was early in the morning. He looked around. The vehicles were moving fast in the hurry of their drivers. He looked at the sky. The sun was already out. He looked around him again. His legs shook in fear. He looked at his friend with the handi-cam, who shook his head, worried. He took out a black handkerchief from his pant pocket. He tied it, covering his eyes. Everything went black. It was just the noise now. A car passed close to him, the horn irritated his ears. He drew his breath and started running.

He was standing there – in the middle of the street. It was 3 in the morning. The whole neighborhood will be sleeping. He knew it. But, he stood there, thinking. He looked around and nobody was there, but, he still hesitated. He drew his breath in and started walking towards that house. He knew that they had gone on a vacation for two weeks. He slowly walked up to the door and started searching for the key. Lucky for him, it was under one of those rocks. He took it and tried to put it into the keyhole. But, he couldn’t; He simply couldn’t. His hands were shaking. He had to hold his right hand with his left to insert the key. He did and the door opened. He slowly opened the creaking door and stepped inside and closed it behind him. He couldn’t see anything. He panicked for a moment and then closed his eyes and let them get used to the darkness. Then he slowly opened them and looked around the house. Suddenly, he felt something – something like he is being watched. He looked back. There was no one. That’s when he saw him, through the window. Someone was standing there, with a handi-cam in his hands. He looked closely and then let out a sigh of relief.

He was standing there – down, looking up at the crane. The sun prevented him from looking at the top end of the crane. He lowered his head again and looked back. His friend was standing, a few feet back, with a handi-cam in his hands. He shook his head, worried. He looked back at the crane. His whole body was shivering. He closed his eyes and drew his breath. He started walking towards the crane and started climbing.

He was standing there – in his mom’s room. It was a Sunday afternoon. Everyone in the house was sleeping, except for him. He couldn’t. He just couldn’t. He opened the second drawer in the dressing table. He knew that’s where his mom keeps her needles. He took one of them. He rolled up the sleeve of his left hand and brought it close to his skin. His hands shook in fear – in fear of pain. He looked at the phone. It looked so easy. As he brought the needle close to his left hand, his right shook. He drew his breath and started pricking his left hand with it.

He was standing there – with his friend, with a mobile in his hand. He looked at him. “Is this serious?” he asked. “Very much”, the other replied. “I want to play!”, he said excitedly. His friend looked at him with disbelief. “What’s wrong?”, he asked. “What’s wrong? You ask ME?”, the other shouted. “Come on! It’s just a game”, he said. “I don’t like this”, the other replied. He patted his back and said “Don’t worry! I am not as stupid as others. I know where to stop. I won’t jump over some old building”.

He was standing there – on the edge, again. His whole body shivered in fear. He looked down and saw the busy road as a strip. He felt a cold tingle crawl up his spine. He closed his eyes and drew his breath. He lifted his leg and stepped over the edge. Shouts of terror were heard. Blood crept from under his head and surrounded the phone whose screen was broken. It blinked with an e-mail notification. “You’ve won!”, it read. One of the crowd called the ambulance – “Someone just walked over the edge!”

NOTE FROM THE AUTHOR:
“Blue Whale” is an illegal online game developed by a Russian psychiatry student. It consists of some 50 activities in which you have to do to play the game and the last activity is to kill yourself. Surfacing in 2013, the game has spread to various countries all over the world and the recent reports of suicides are from India.