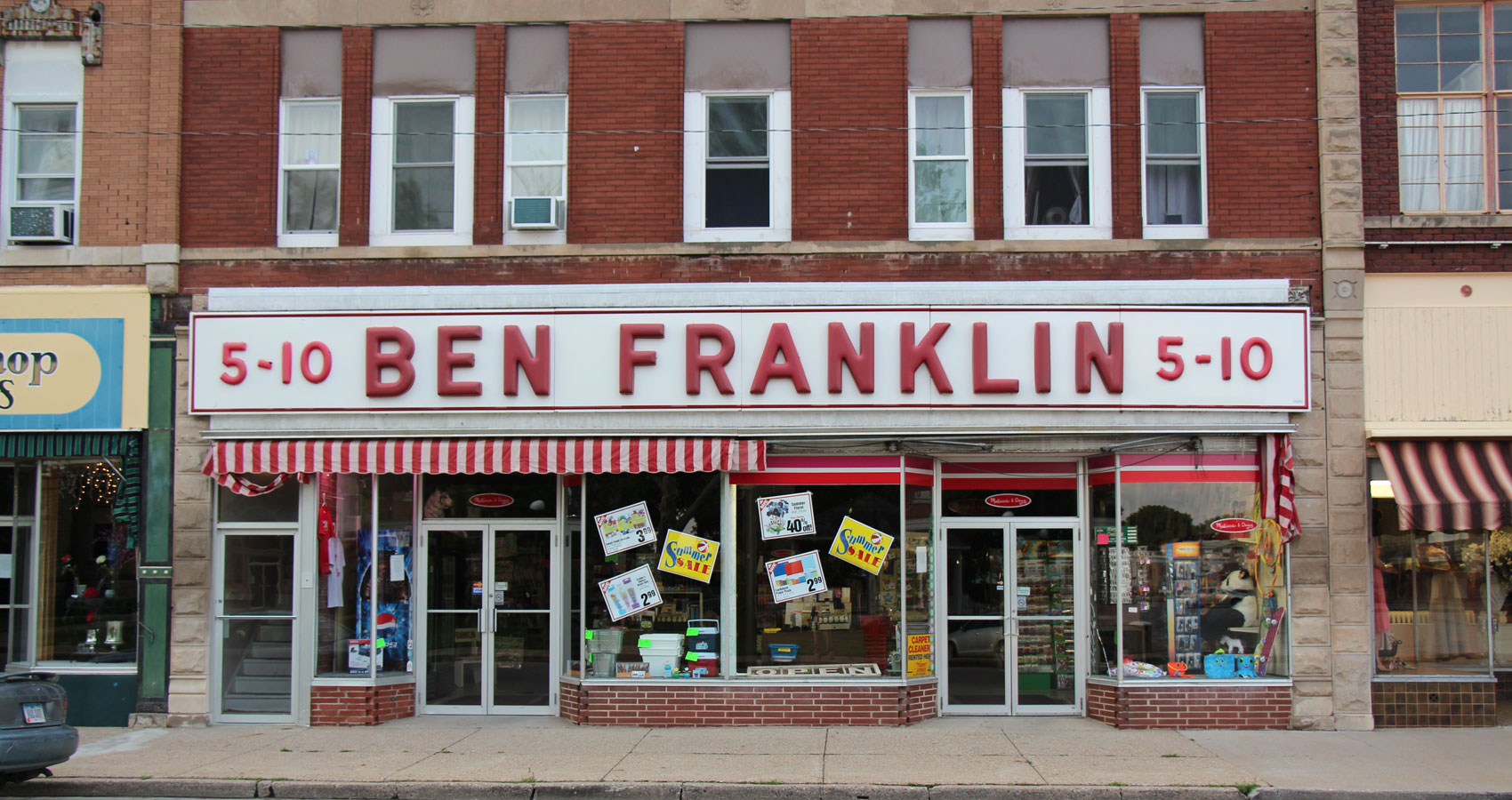 My sister told me last year that our small Midwestern hometown’s Ben Franklin 5-10 (aka “Five & Dime”, aka “The Dime Store”) was torn down. I hadn’t been home in 17 years and its absence (now a gaping space in near exact-middle of Main Street’s west side) hit me a bit harder than I’d expected, on visiting in June 2017.

“The Dime Store” was both Americana and a glimpse into foreign lands. Owners John and Ruby (older than my parents) kept us in: Pet Rocks, Mood Rings, rock ‘n roll albums (I especially coveted “The Elder” by KISS, but our religion forbade it. It’s probably also the store wherein I freaked my mother out by asking if I could have an Alice Cooper album [her memory, not mine]). American Greeting cards with photographic or glitter-crusted fronts. Candy cigarettes, candy lipstick, bins of penny candy (alongside regular chocolate bars). Earrings fashioned after tiny Pepsi-Cola and Dr. Pepper soda cans. Assorted “Spook Town” and “Ben Cooper” boxed Halloween masks and costumes. Every 4th of July “firework” then legal in the state. Cheap perfumes like our favorite – “Skinny Dip” – with its playful lemony fragrance. Gift purchases were expertly wrapped in back by Mrs. S. who, via sharp scissor edge, gave a length of polypropylene crimped ribbon a wicked curl. “The Dime Store” sold calendars and jigsaw puzzles featuring foreign lands. Supplied us once a year with “Mexican jumping beans” and lollipops with a little worm inside.

“The Dime Store” is where a girl became a young woman, budding into my first training bra. Tried on in their stuffy little “changing room”, in which was kept a mannequin’s head with elaborately painted eyelashes and a bright scarf from the ’60s.

“The Dime Store” is also where I got a jolt one day: Coming around an aisle to see an elderly woman ambling my way; neat dress, clip-on earrings…and a full mustache like Captain Kangaroo’s.

Like many people born and raised in a small town, life was bittersweet. Religious battles therein were fierce. Tribalist denominational loyalties were real. My vocal, fundamentalist parents escalated the ridiculous animosities so that by 1983 “The Dime Store” was pretty much lost to me. My heart left that town years ago – except “The Dime Store.” Which is now also gone.