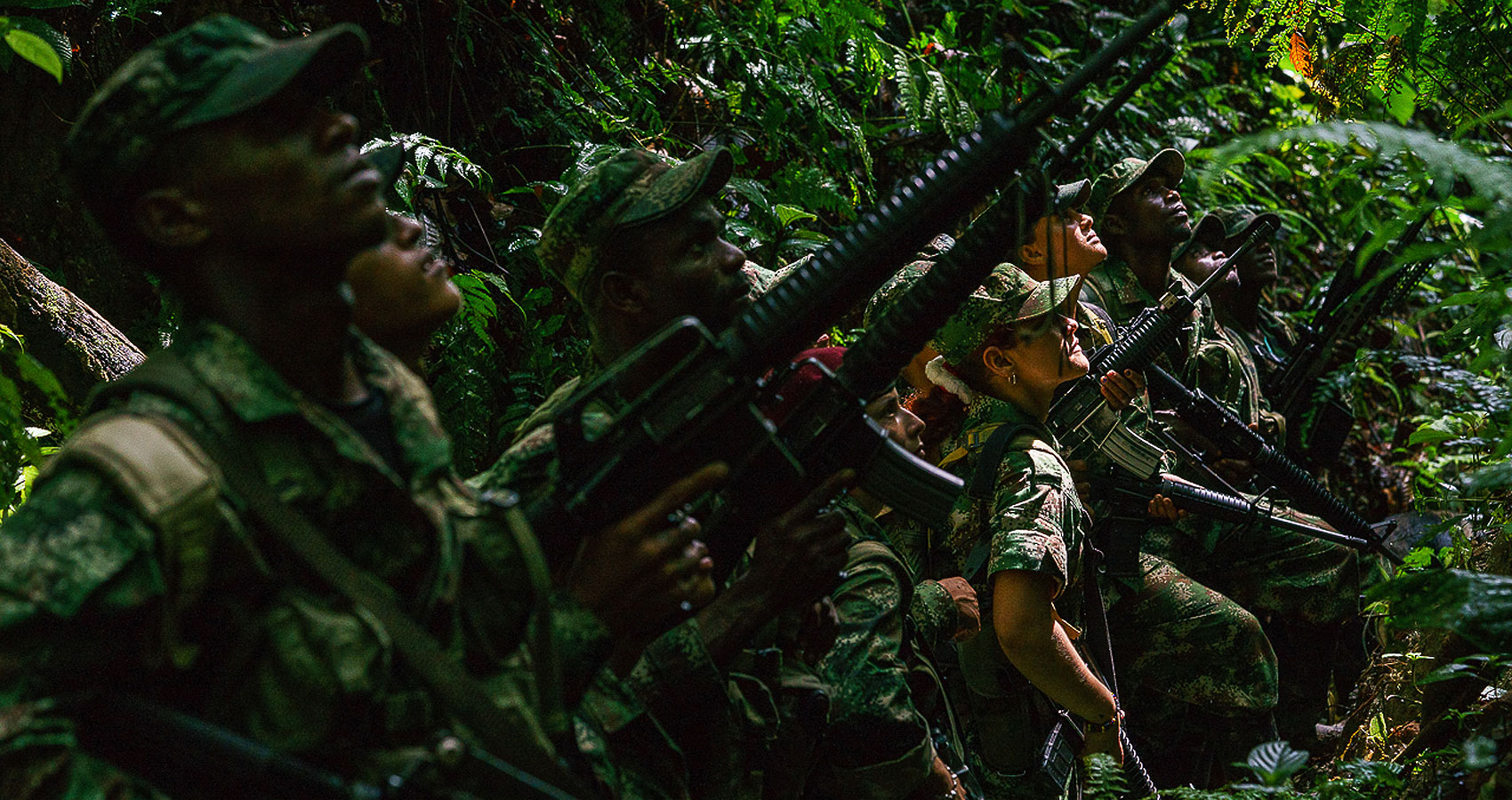 The sun flashed into his eyes as he peered out of the foliage. He tightened his grip on his rifle. He moved his head back into the shadows sinking slowly once more into the copious fern. He was sick of war. His friends lay in the dust a mile down the road, their many wounds saturated with heaps of busy feeding flies. How many friends had he left behind in such a condition?
“They’re around here somewhere.”
The voice was near, maybe in the nearby copse.
“I’m sure I hit one. At least one.”
It was an old man’s voice.
“Where is he then, if you shot him? Where is he?” Another exclaimed irritably. “ Just like you. You thought you’d hit him. Always claiming you hit someone or other.” The man now sounded angry.
“Hey, don’t take it out on me. I’m telling you I hit him.”
He heard them walk away and began breathing again. Other sounds told him that more were searching the area. Branches snapped. Guns were loaded. A shot was fired and a man screamed. Another shot was released. This time it was succeeded by the sound of booted feet trudging away.
He dragged himself deeper into the bushes. From there he could see across the grassland. It was dotted with men carrying automatic firearms. Some wore uniforms, others just loose-fitting trousers and flapping shirts or coats. They wore an assortment of caps. He hated this type. Hated them more than regular troops.
“Got another one.” A voice called.
He knew what they would do. A small group of them gathered around a tangle of bushes, yanking one of his comrades to his feet. He could just see the man’s face. It was Stefan. He’d know him anywhere. His short blonde hair stood up from his head like corn stubble.
At first Stefan looked at them without emotion. He was going to be strong. Then one produced a machete and swung it at his arm, slicing the bottom off. Stefan screamed and fell to his knees. He cried:
“No.”
He screamed again.
He saw the youngest of the soldiers, a mere boy, draw a knife across Stefan’s neck. Blood like globules of phlegm flew out. The boy kept sawing until his friends head came away, throwing it into the air as the others laughed. It fell a few feet away, disappearing from sight.
He began trembling. He pushed his body deeper into the grass. This was war! My God, he thought, how cruel men are! These men, he thought angrily, are monsters, not men!

Night thankfully came. There was only a slight slither of moon light. Fires began to appear in the fields and he noted forms moving around them, in and out of the shadows. He took the chance to escape. He began to slowly ease himself backwards, away from the surrounding enemy. In an hour he had reached the fork in the road where seven hours before he and his comrades had stood blazing away at the attacking forces. His friends’ bodies were already swelling up, emitting a saccharine smell. He continued crawling. When he reached the other side of the fork he retched silently into the earth desperately wishing he were blind. Briefly, he cursed his sight. A row of heads, placed neatly beside each other, of the Captain and the three sergeants was arranged before him. Their blank, bloody eyes stared upward. He crawled painfully past them.
The firing and screaming continued.
Once past the heads he began to relax. If only he could reach the hills in the distance. Once there he was sure he’d be safe. After another hour of slow, careful crawling he reached the bottom of the nearest hill. He breathed out a sigh of relief.
He heard the sound of feet on scattered twigs. He exhaled in a strangled rush.
“Ah, comrades.” A voice above him growled. “We have another little insect trying to escape.”
Several hands grabbed him, lifting him to his feet. His breathing continued to come in gulps as fear kicked in. He shit himself. Smelling his dribbling effluence his capturers began laughing and poking at him with their guns. They began dragging him back to the killing fields. He sobbed.
“The little boy is crying.” The same man laughed. “He calls for his mother.”
His had lost all control of his muscles, his power and strength gone. Urine ran swiftly down his legs, creating a wide stinking stain.
“The little man is scared.” One of his captors guffawed.
He was lifted up, his boots dragging in the grass.
Quickly they reached the area from where, two hours before, he had begun his escape. There he was deposited on the ground in the middle of a growing group of laughing, snarling, incensed enemy soldiers.
“This is the last one.” His capturer said. He poked him with his gun. “What are we to do with him?”
“Let us take our time.” A voice from the darkness advised. ‘Let us have fun, like they had fun.’
A murmur of assent passed through the gathering throng.
Once again he was pulled to his feet. His head hung down onto his chest. A knife flashed in the firelight opening a wound in his cheek. He screamed, not because of the pain but because of the pain to come. The knife flashed again. Blood dripped from both wounds. It fell onto his ragged khakis and mixed with his urine. A tear emerged. He let it fall. Other knives flashed and soon his face was crisscrossed with bloody slashes.
“Oh God!” He moaned.
“Not so fast.” He heard a voice command. “Stay. Make it slow!”
His clothes were torn from his body and soon he was standing there naked. He saw torches being carried towards him through the half-light. Each was pushed against his flesh. Some were left there until his nostrils were filled with the stench of his burning, blackening flesh. A stray fist collided against his body and again and again his torso was slashed. One soldier pushed a bayonet into his buttocks; another cracked his head with a rifle butt. This went on for half-an-hour. All the time, they mocked him.
In a second, his genitals were sliced off. He screamed and gratefully fell into unconsciousness. Water thrown onto his face and body brought him awake. When he regained his senses, he screamed again. The sound flooded the darkness. A machete took off his shoulder. He passed out again.
When he awoke he was lying on the ground. He was close to death. Above him stood the young boy, apparently an expert at decapitating prisoners, he had seen several hours before. In one hand was an old blood covered half blunt knife and in the other a mobile phone. He placed the knife upon the dying man’s neck, barely touching the flesh. The phone recorded his actions.
At that moment, a minute from death, he recalled how the previous day he and his comrades had walked into the town blazing away with their guns, killing everyone that moved. He had picked up a child and smashed its head on a wall. He had caught a young girl and raped her. Afterwards they had torched every house and hut, laughing as the screaming inhabitants fled, only to be swiftly cut down in rapid gunfire. Those few that survived, they’d hacked to pieces. How they laughed! What fun it all was. How could they know the enemy forces were so near? They would never have acted like that if they had known. The knife dug into his flesh and he felt it sawing away towards his jugular.

The material you’re about to read may be inappropriate for some readers as it contains Mature Subject Matter and Graphic Violence. Viewer Discretion is advised.