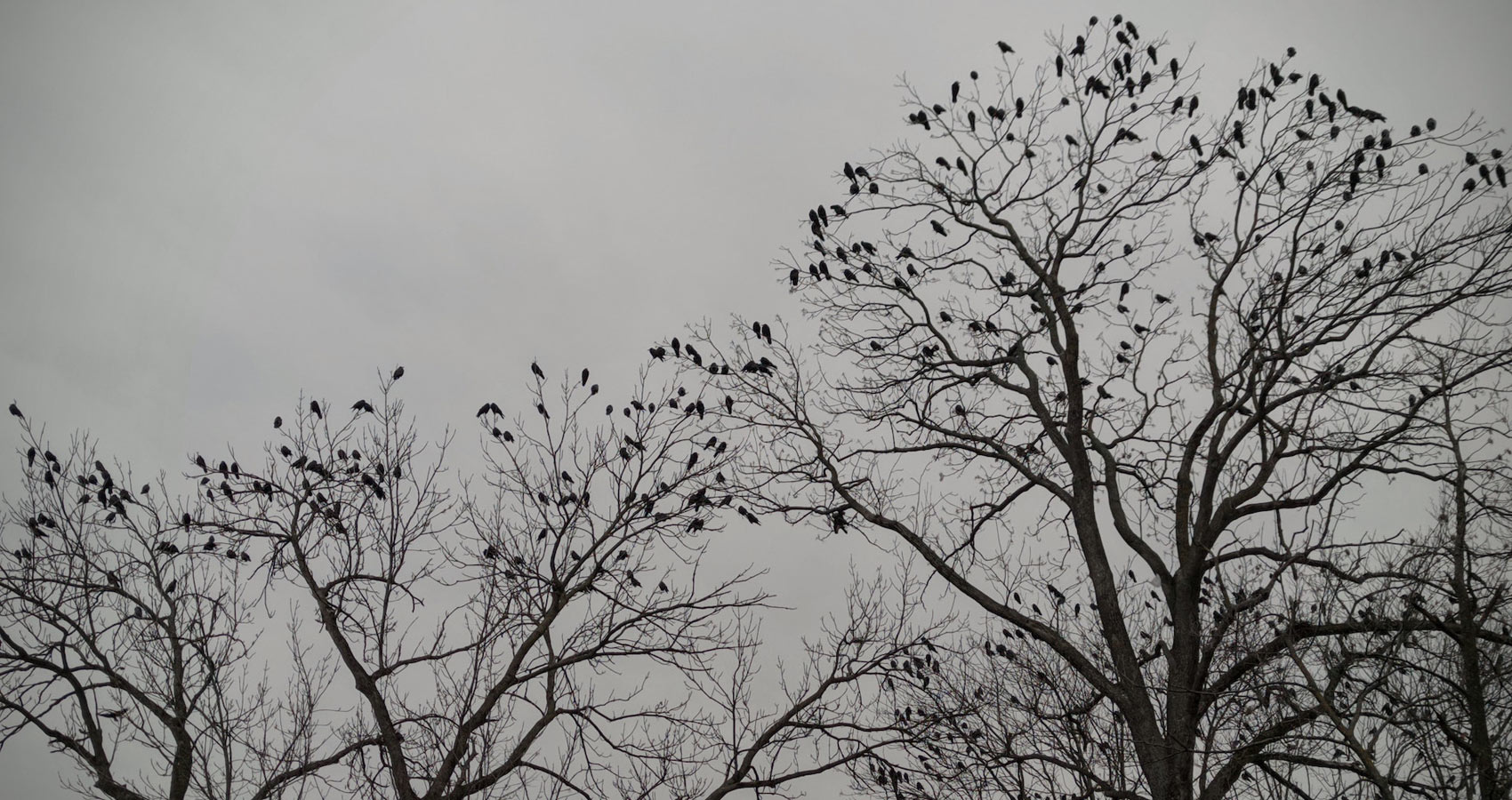 A Murder of Crows

A Murder of Crows

My grandmother, a pillar of the old craft, spoke of the crows as the memory keepers. Majestic scavengers, a fist smaller than their boxy cousin, the ravens.
The social aviary of grating coos and full-throated caws spread our town’s lore from overhead, and when needed, united to decide the capital fate of another. And if inclined, grandmother said one could split their tongue with a knife, gifting the crow with human speech.
My sister, a devotee of my grandmother’s endless yarns, had a recurring dream of the crows lifting her body from the orphaned town. Their collective wings whooshing in the darkness. Skywards, above the Bowenkamps, McElroys and Trollingers. Shoddy farms seated deep in the cut with rickety mailboxes adjacent pitted roads puddling rainwater. The glossy black mass encircling the graspers on the town’s periphery. Those hung on the ledge of poverty.
On moonlit nights, she would ascend within the mass, rising to catch the waning curve of the earth and a glimpse of modernity in the distance. Her audible delight butted against the raspy caw of the flock, which swooped towards the town’s tainted core, gathering amongst the boundary stones at the graveyard’s edge.
“My dreams always end in the cemetery,” she said.

My unwed sister lived on Main Street. Under the vigilance of the town, in my grandmother’s wilted five-bedroom colonial beset with large mantels above empty fireplaces, eleven-foot ceilings and a dozen leaky single pane windows. From the porch, an unobstructed view of the town’s general store, bank, underdeveloped strip mall with a half-acre of cracked asphalt, feed shop and a half-dozen houses beyond which the endless fields stretched to devour the horizon.
The town’s population dwindled. Nearby communities had similar exoduses. Blends of tragedy and migration from the entrenched problems: poor seasonal harvests, unemployment and secular ideologies that eroded small-town culture. That was not why I left. Misfortune did more than steel-toe kick the life out of our town. It cursed it.
My memory of this place was grandmother rushing my sister and I to the hospital in Highland. And into the emergency room to gaze upon Mother’s broken body, Father having passed in the car accident minutes prior. But the memory is defective, because what followed was us sitting in my grandmother’s kitchen, eating pie, and laughing at the ice cream clinging to my sister’s lower lip as neighbor’s circled the house, peered into windows, and met with Grandmother on the porch.
After lunch, we played in the tall fields that begged us into the summer’s high sun where our skin baked brown and flawless until the evening settled. I remember the intimacy within the pines and fallen needles that snapped under our weight, and the intoxicating fresh air with a breeze that carried our whispers and dreams from mouth to ear. What I do not remember is our grief.

She requested my presence via text. It’s time to come home, big brother.
Years ago, her physical architecture spurned brutalism. She was thin and subtle, with a fortunate smile. Now, upon my return, a desperate rehearsal for appeal. I appraised the contours of her enormous, striated belly as it shape-shifted beneath her hospital gown. Agonizing moans marked her discomfort as the fetus within worked towards the ripening neck of her womb and a pelvis ready to accept motherhood.
She labored for hours. The fleshy entanglement of our grip tested by her mounting pain and breathy pants.
Beyond the birthing room, life. Announcements crackled. Magenta scrubs marched with inbred duty. And laughter. Odd, misplaced laughter.
On a windowsill, a lone crow cracked as raindrops splattered an empty sidewalk.

The baby arrived lifeless. Paler than milk. Veined-blue and motionless.
“Died in her sac,” the doctor said. “Stillborn.”
Two fresh-faced nurses returned (removing the baby girl), as I wept within the unexpected void of death.
Loose amongst the tragedy, a single thread of clarity. Grief.
As the isolette clattered across the threshold, my sister stiffened with a rote prayer. A holy murmur conceding no exemption from death.
“I’m so sorry,” I said.
Her impermissible sorrow, an expanse of her sadness weighted by the circumstances of its genesis (her angel baby), vanished with a smile.
“It’s okay,” she said. “You are home. We are home.”

A century earlier, a young woman suffered a similar tragedy. Wedged between the expiry of the fetus’s olive-sized lub-dub and her maternal wail, a crow shattered the midwife’s window. The slick black animal landing inches from her bedside. Disemboweled. Feathers and china-white bone exposed.
Others struck. A melee of hoarse, squawky cries. The aggregate of keratin beaks shattering glass. Hundreds. Thousands. Littering the streets with achromatic carcasses. Darkening the skies.
Those amongst the carnage, awash in a permanent hush.
For the dead birds, the scholarly hypothesis from university was a sudden ammoniacal imbalance in the atmosphere. A one-off primordial event. Caustic material pulled from the town’s farming soil, imprisoned within the troposphere. Then, under precise conditions, dumped upon the earth. A fracture in nature’s cycle.
For the woman’s unborn, the atmospheric shift disrupted the placental exchange of oxygen and carbon dioxide within the umbilical cord. Starving the fetus of oxygen. Seven others in the maternity ward suffered similar fates. The smallest, underdeveloped lungs the most vulnerable.
“Winged messengers with a stark warning,” the preacher decreed.
Grief infested everyone. A teary-eyed blight, as eulogy after eulogy piled upon themselves, layering the town in darkness. The bereaved in gauzy despair as the crows squawked at their loss. The unremitting sorrow metastatic. Mothers deprived of motherhood, brothers, aunts, uncles with slack faces yanked southwards.
For weeks, the town cannibalized itself. Fields lay untilled, gas unpumped, grocery shelves unstocked and bare, the community hospital understaffed. Unabated sorrow its anchor. At its nadir, the old craft issued a decree. The word “grief” forbidden. Its expression a curse with grotesque consequences.
“We will forever be without sorrow and grief within the borders of this town,” the mob cried.
Believers most. From the pain of loss. The crows and humans alike.
The old craft died. Including my grandmother. Those who remained, a town of ghosts, mere shadows of little imagination and inbred fear. Possessed with a hollowness that forced away the dismissive. Something else grew. Anger—a deep, long-simmering anger—for those who challenged its past, but also a sense of obligation. To keep death at bay.

We returned from the hospital as shadows swallowed dusk. With eyes deep and sideways, a crow on a light pole pitched forward. My sister, awash in pallor and lingering strain, carried the smell of hospital antiseptic on her skin.
“You’re allowed to be sad,” I said. “The old craft and their stories. Just a myth.”
She contorted on the porch with a crow looming in the background. My words a clear violation of her bond.
“Leave with me. Leave this place.”
“Grief is insidious. It overtakes. It is…” My skin, by proximity, prickled.
“… Forbidden.”
Her loss never occupied her mouth. It lay empty as her uterus. The maternal bond, a slipknot.
“Your baby died,” I said. “You’re allowed to grieve. In this town… Amongst these crows…”
Without understanding, her depleted body swayed with falsity as the air churned, moist, and stale, like an old dishcloth.
Her eyes sputtered, a wrenching but fleeting expression of fear for human life. For my life.
On a neighboring porch, lights flashed. From a sill, a crow squawked.
“Joy is not the enemy… Joy is not the enemy…”
From the shadows, townspeople emerged. Not monsters, but ordinary people. A handful, short and meek. Others thick from labor. The majority awash in condemnation, their eyes elastic and fearless. Set upon the night by my defiance.
“Banning grief is unnatural,” I screamed.
“We cannot make you believe what you don’t see and don’t know,” the crow said.
Below a streetlamp, the small mass tightened at the utterances of the split-tongued carrion. A thread of sweat acidified my eyes and salted the corners of my mouth. My nose, fouled by the terpenes of carnage, burned.

Within the violence my sister danced with levity, silhouetted by light from the kitchen window. Accepting the grotesque slaughter, as worn boots stomped me breathless and crows tugged at my jagged wounds. I was a defect. Rejected by man and crow. The pair bred to silence my dissent.