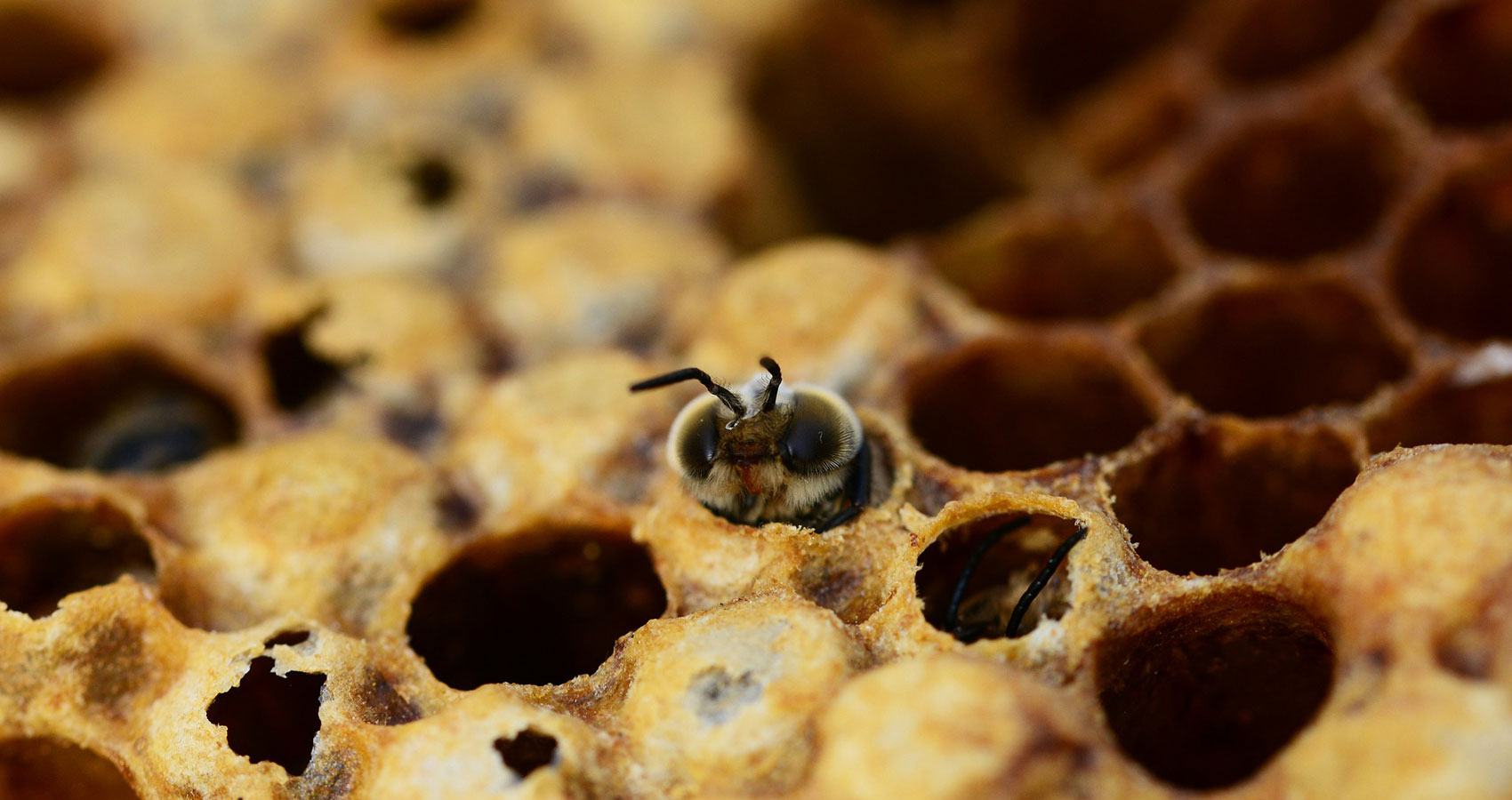 With a flick of his fingernail, he decapitates the honeybee, pinching its head and limp, probosci’s tongue between his fingers. He examines the miniscule hexagons proliferating its oversized compound eyes. There’s a rush of remorse for his apiarian casualty.
“Punishment?” Mackie Chapman queries as glides by on his three speed, peering through gaps in the hedges.
“No, I..I… lost something.” He says discarding the bee.
“Yeah right,” Mac laughs, popping a wheelie on his bike. “Looks more like punishment.” And then he pedals off, the baseball cards on his spokes choppering with power.
He’s found a rhythm with Mac gone; the two pivoting blades shearing the high grass in swaths. His father says its discipline, not punishment. But as the sun ripens the nape of his neck and the scissors blister his hands, he knows only humiliation—the neighbor’s witness to his obedience; on his hands and knees, thinning the expanse of dense Bermuda.
When the opportunity presents—his father no longer hovering at the window—he abandons the scissors and uproots chunks of lawn with his overworked hands, exposing layers of dark earth until his efforts produce a large hole. He crawls inside, tucks his knees into his chest and screams until the salty brine of the tank water replaces the rancorous tang of childhood.

The white-framed house with a small patio showed its age in the beadboard on the ceiling, walls and narrow halls. In the uneven hardwood floors that spread like warm butter—with their creaks and groans and dark spots where the thirsty wood drank up too much of the stain. And in the windows that sat cockeyed in their timber casing.
A collage of smells met him at the door: candles, essential oils, lotions, and many items homeopathic. There was a vibe of mysticism in the silver that dangled from the dozen tree branches rooted in flower pots and filled with sand.
He arrived at noon, the flamboyant sun throwing itself against the antiquated windows where spider plants and hanging crystal mobiles tickled the glass. Two large couches, a rug, and a dog consumed by the fluff of his bed overtook the center of the room. A second room accommodated the flotation tank.
A better alternative to alcohol and cannabis hinted his therapist. He’d try the tank, but his vices were permanent.
After basic instruction from the bandy-legged attendant, he undressed, showered, and lowered himself into the tank. In the unknowable darkness, he settled atop the thousands of pounds of magnesium. The slurry of water and salts engulfing him like a viscous womb.
The temperature matched that of his body, cloaking his arms and legs from his torso. His ears sunk below the water line, removing sound just as the darkness had taken his sight. Thoughts pinballed inside his weightless brain. A tingle scurried across the surface of his skin followed by the stir of panic as another childhood memory freed itself from its mental mooring.

The van door flew open on a not-so-sharp corner of rural highway. He was ten. Everyone screamed. Except for his father who wrenched the steering wheel and slowed the 1968 Ford Van onto the shoulder. As the driver’s door open, his trapped scream fled with a whimper. Was it him who forgot to lock the van door? Was it his mother? His fear pouring over his skin like hot lava.
As the van slowed, and the trees slotted by, he thought of jumping. But when went to move, his body betrayed him, because in the moment of terror, it had dispensed everything, including his urine onto the seat.
Trapped in a silent rage his father slammed the ajar van door, returned, and headed back to the house. The family trip abandoned.
Once home, the house bellowed with rage, his mother reduced. He hated her for being a victim. But felt relief, because today he was not the target.
“You idiot!” his father screamed.
Dishes shattered and doors slammed. Harsh, raw words frayed tenuous marital bonds.
When the fight erupted with raw, open screams he slipped from the kitchen and into his room. Under layers of blankets, he pounded his fists until the mattress gave way to the black universe of the tank.

The music came on at ninety minutes. As did the lights. He showered and rinsed what lingered into the drain.
“How was your float,” the counter girl asked. She was sitting cross-legged on the patio, scraping honey from a hive frame.
“I think I’ll come back,” he said as the prismatic wax cells collapsed from her efforts, and thought back to the lawn, and his father, and how the bees will clean the remnants from the stripped frame and rebuild once again.