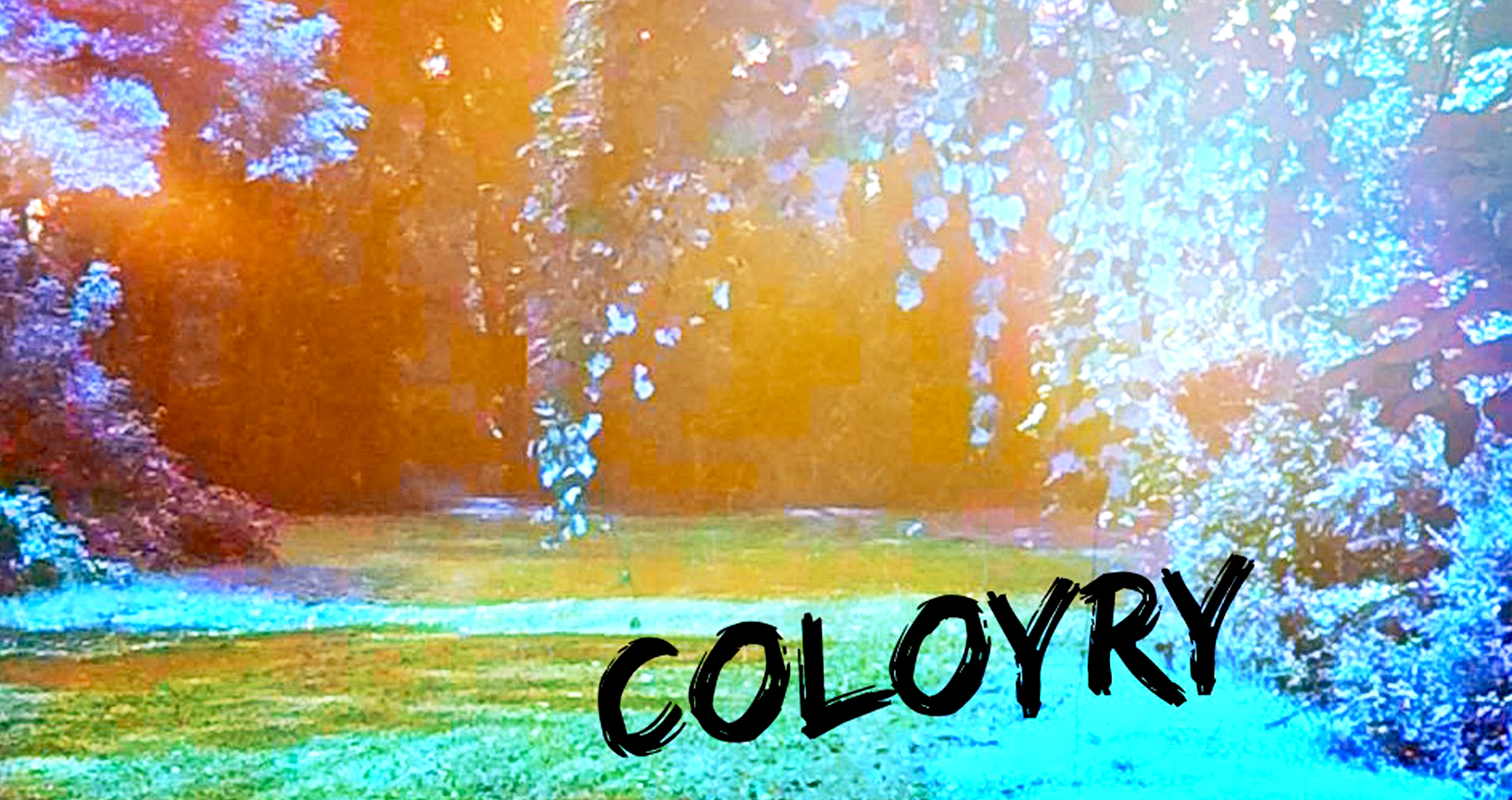 As I stroll through the blueish woods on the trail of the metropark, my skin looks so strange almost orange out here these last few days. It’s a little past noon and I’m just looking for a good picnic table to eat my lunch. I feel like I’m on another planet, but I must admit this wild color is funny to me. I went to a bonfire last evening and watched my friends’ faces in the flicker of blood red flame. They looked like demons while obsessing that this could be the end of the world. My girlfriend Emily looked so pretty, even though her face at one point looked like a grape in the strange twilight. The comet C/2027 X2 or better known as the Collier-Wray comet has been a spectacle in the eastern sky for six days now. It’s affecting the stratosphere somehow making hues slide down the color wheel. Everything in natural light is tinted different than normal. The science experts at the media outlets theorize sunlight refracting through ice crystals to be the cause, but are not in full agreement with one another. They are also saying the comet has no orbit and with its trajectory passing so close to the Earth, within 1,200 miles, it will partially eclipse the sun tomorrow over eastern Pennsylvania and western Ohio, with parts of southern Ontario as well. According to NASA, we should see it here in Akron, at 9:01am. It will be a violet shadow with almost rainbow colored corona from what they say. It’s gonna be weird for sure.

I find a picnic table that’s relatively clear of bird droppings and begin eating my lunch. Ham and turkey sub with mayo and jalapeños, nothing better tasting, but the red bun is not visually appealing. I laugh despite a feeling of unease. For me, it’s kind of far-fetched to think that this world could be coming to an end.

YouTube and Vizself are inundated with so-called ‘proof’ videos of an eminent doom from this happening. Most of them cite a former Colombia University professor, Dr. D’Alessandro, that has been pushing a notion that if there are any transparent ice spots on the comet, it will magnify the sun and scorch the earth to devastating results, not unlike a magnifying glass that concentrates heat in a laser effect. There are others who think the earth’s gravity could pull it apart and hurl chunks of it back at us.

Both theories seem legit to many following them on social media, who act like they are bracing for the worst.

I guess the more unnerving part of this whole phenomenon for me is the fact that I keep seeing phantom people in my house. No noises or voices associated with them, like they walked off the set of a silent film. Last week for instance – I saw a woman in a ragged white dress in the bathroom mirror. The room she was in was huge and not the reflection behind me. Her face was too distant to see clearly, but I know she waved at me.

Also, I woke up the other morning to see a child sitting near my closet. He stood up and walked into my wall, as if it were an open door. Sure, I could have dreamed it, but it was so clear to me. I’ve lived in this house for 7 years and have never seen these things before now, before this, the alternate light thrown by a stellar prism.
Later that morning I saw a word on my wooden floor in black crayon “coloyry”. I guess the phantom kid put it there. I have no idea what that word means, I spoke it into my nanotranslater and it couldn’t find a language. Perhaps is just a corruption of “coloring” like a kid would misspell since it was written in crayon.

Weird, yes — but none of that scared me as much as you’d think. I haven’t really been astonished by anything lately. My senses seem dulled, my drive feels drained, it’s hard to feel joy or empathy, or even lust…and that part is foreign to me!

I do enjoy my sub sandwich sitting here, but I wonder about my relationship with Emily. She has grown paranoid about us and texts me nearly every hour, wanting to know where I am, what I’m doing, etc.

She gives me that look when I have to leave her for just about any reason. I am probably partially to blame because of the aforementioned dulled senses. These days are certainly bringing out the worst parts of our personalities from where we have them so deeply hidden. I suspect Emily too has seen these phantoms that I’ve encountered, but she doesn’t want to believe it. She only tells me she’s had extreme nightmares of late. When I ask what they are about, she only says she can’t remember them.

I take a gulp of my soda and sit it back down, staring at the condensation as its running down the can, dripping on the pinkish tinted table. I wonder if after this comet event we’ll all be colorblind. It’s already driving people out of their minds, your eyes kind of ache as if you were staring at a black light poster too long. I don’t think our eyes are meant to endure all this hue fluctuation. My buddy Mick and his wife left Akron to stay with his aunt in New Mexico to get away from it, apparently it’s not affecting that part of the country as much as it is here.

I notice there are so few people on the streets during the day in the normally busy downtown area, and some people stay in their homes with the curtains closed, not wanting to deal with it.

I’m not going let it get to me, the warmth of the sun is the same, as is the breeze shuffling the treetops, and herons and egrets are still dipping in the creek.
This will all be over soon anyway…one way or another!

Emily is texting me again. ‘Where are you, are you out to lunch-miss you!’ And a minute later ‘Hayden? everything okay? why don’t you answer 🙁  you there?’
I start to text back when I see movement from the left of the picnic area and glance into the woods. Oh my, there are three of them staring at me. They wave for me to come to them but this feels really wrong. The phantoms with their desperate faces are chilling and their eyes are very dark. I get up from my picnic table and walk closer. They are mouthing something. “What?” I say, pointing at my ear. They mouth a word slower and it looks like: suffer.

There are two women and a boy, the taller woman reaches out for my hand and I’m reluctant to give it. She mouths the word please from her pale blue lips. None of them move past the tree line…are they trapped in the deep shade? I’ve been raised to respect all people and want to help them, but I can’t bring myself to go any closer. I worry they are dead, and want my strength to ease their torment, or worse, want me to join them. It isn’t that I fear death, we may all be on that brink. I fear becoming like them. Caged in the rows of these wooden bars, or stuck in mirrors and walls, and probably living in constant sorrow, it sure isn’t bliss I see in those faces.
An overwhelming feeling hit me like a flash just then…this is it!

The veil has been lifted, I can see that now. Could it be, it’s me that they warn of suffering the loss of everything precious and want to help me, not the other way around?

‘ Coloyry ‘, or Collier-Wray is doomsday, that’s what is going on here, isn’t it? Is it better to be dead already?

Their stares are intense, and unblinking. My heart feels like it’s in the grasp of an icy hand. They hang their heads, and turn back into the deeper shadows of the wooded area. I watch them fade out like a hazy sunset.

I returned to my table, and see Emily has called three times. I throw away the rest of my sandwich and call her back. She answers the phone “Hayden!”
“Emily!” I say.
“Omigod, you’re okay! I was so worried, honey!”
She says nervously.
“I’m not okay.” I say dully .
“Honey…what’s wrong, where are you?” She grew frantic.
“Not okay anymore, but…I love you.” I throw the phone on the table, and hear her raised voice crying out, as I walk out into the deep wooded shadows.