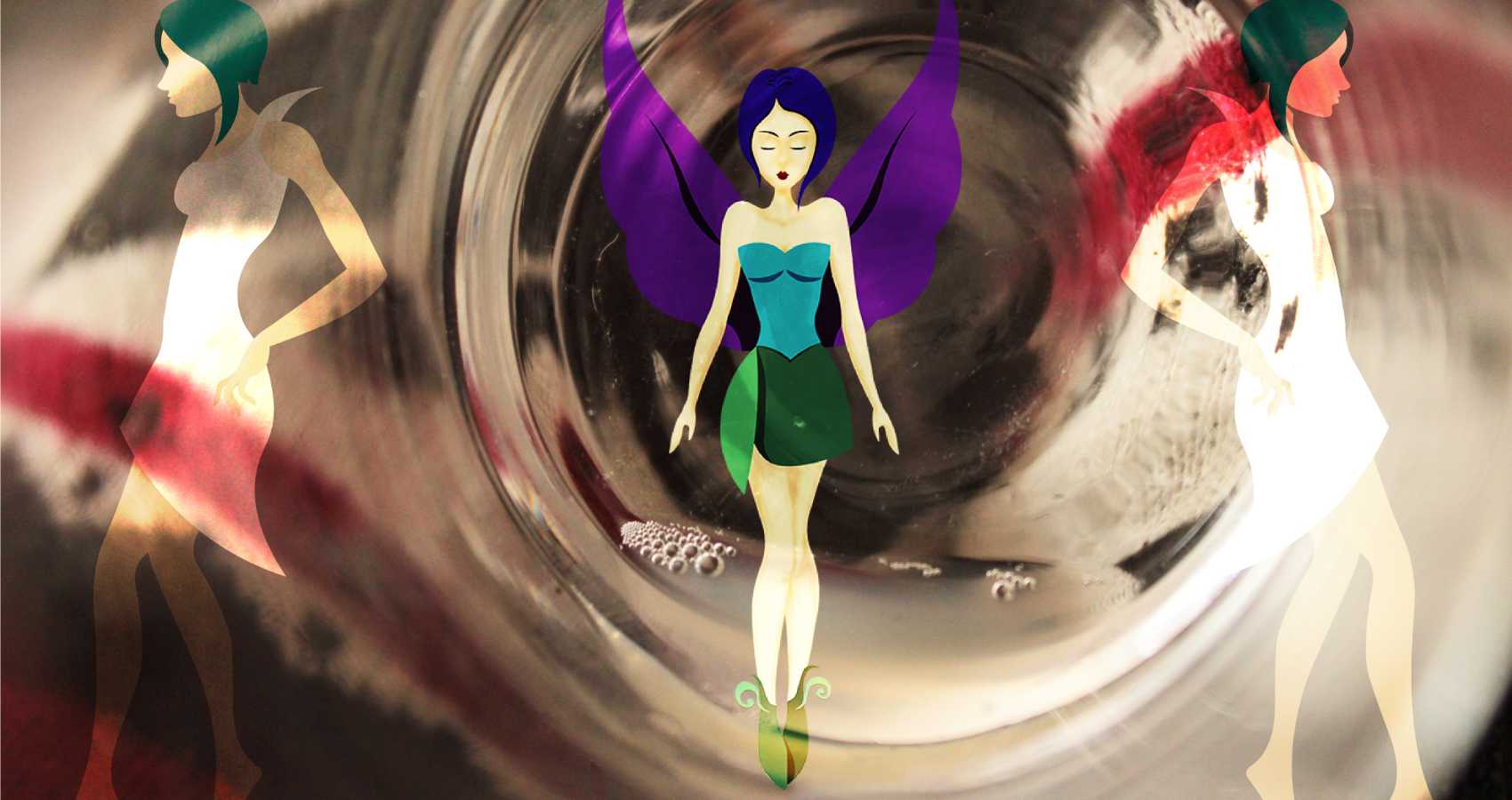 In the case of a lady that left behind a world
Sits a girl who wanted to escape her corner of dark,
A room she was imprisoned once by parents that needed love
But love is something to laugh at there, in their world,
_and they too deeply hurt.

A try or two she gave, the miracle of life they say;
She failed, now what was she? An empty shell like all of them,
The other monsters seeking food for bodies they can’t nurture well,
In rooms for poverty to show its kindness and its fangs.

So, there she barely breathes to make no noise,
To suffer great pains on any sign of the alphabet no more,
Today she is not beaten like before, it is still dark but giving the try’s worth…
And she dreams like a baby that waits to get out
From this womb of the time the lady carries on
_with sad childish charm.

Two souls found themselves so, the day the case opened,
The girl sitting crouched, dreaming about fairies and knights and trolls
That she defeats with the army of her hopes embellished,
With a touch empowered with the sweet ladies’ perfume.

But as time passed slowly so did these days of peace passed by
With speed she couldn’t notice was quite rushing through tales and life
And one day she faced the truth, the legacy was hers,
But how to be the good witch that this old lady, her real mother was?

She never knew her parents, for siblings she cared not,
She only wished them well enough never to look for her and find
The girl who suffered back in times she was erasing each day in her mind
To put instead on walls of white, good colour from a mother with a real kind heart.

“Can you put down a monster, with your magic?” oh, dear?
“Can you enchant all the fae and foe and leave them to the grace
Of any god that loves them well, without you getting harmed, my dear, again?”

“Can you kill and enjoy all your life after what you’ve done?
Can you seek answers without crying anymore?
Or there isn’t enough left of that courage we spoke
and you must seek strength and gather new force?”

“One day this body will be no longer here” she remembered too well,
“No longer here, no longer there, or anywhere, dear Hope,
But keep in mind that what we are is so much more!
Just keep a good heart and be the good witch in this refined lore.”

Facing a monster or two came easy, yet day came to face something else
And this time it was an army, like the one that closed her doors
To the happy childhood she only found in the case of a lady-witch who showed her what was love.
Back then when she was hiding from punches and feet in her ribs,
_when charming meant to her nothing but some disease.

“Can I put down a monster, with my magic? oh, dear!
Can I enchant an entire army of monsters, foe and fae?
How can I fight them all now that they attack our domain!?
Oh, mother, good mother help me! I feel that I don’t know.”

A field of magic is active, it holds back for a while and it charms fae and foe
But the girl, our Hope, is lured into the woods by a secret from deep undergrounds;
As she finds the tunnel she leaves the safe space
Then she carries on into the cellars of the Dark Prince.

There she kills all the guards and faces the smell of corpses,
Lost souls wailing and screaming make her think her tunnel out
Then a ghost humming a song, another one weeping…
_nothing of this is real!_ not even the creepy clown.

“How do I get out of here?” Nobody cares to answer,
As zombies and dying creatures crawl so does her appetite falls for destruction;
She would incinerate the place, it would bring relief, but the moment she thinks it
A new burst of hot tears from the sky kills,
_and the yells become vivid and real.

Out in the darkness of the morning after the great kill
She watches the corpses on which the fog weeps its white tears
She thinks she’s alone but the surprise’s not great:

Out from this nowhere a monster of a dark man
Grabs her by the throat and takes her into a small chapel.
He grabs her by the waist and tries to bury her alive – she’s the old promise of that girl,
That girl he must sacrifice in the name of their lord!

“Can I put down a monster, with my magic? oh, dear!
Can I enchant an entire army of monsters, foe and fae?
How can I fight them all now that they attack our domain!?
Oh, mother, good mother help me! I feel that I don’t know.”

She is fighting him but his eyes seek no mercy,
There’s no pleasure taken to see in his perfect murderer guise,
If he was human, ever, now that humankind’s effaced,
Taking away her breath, attacking her sight: a real servant to Death.

Out in this darkness her chest exhales a chant,
Along with her magic kind of a knife she cuts deep into his veins and has him howl and hurl
His pain of ages he lost out there to the souls that were lost,
To the fog and the rain, a few tears trickling down a visage that asks for mercy,
_He asks for the mercy of being killed.

“One day this body will be no longer here” she remembered too well,
“No longer here, no longer there, or anywhere, dear Hope,
But keep in mind that what we are is so much more!
Just keep a good heart and be the good witch in this refined lore.”

“Can I put down a monster, with my magic? oh, dear!
Can I enchant an entire army of monsters, foe and fae?
How can I fight them all now that they attack our domain!?
Oh, mother, good mother, what have I done?”
_Look, he is on his knees yelling his tears at the clouds!

As she leaves the corpse behind, in the chapel placed as she’s been told
Her new bed of cold stone prepared for some time long,
for all eternity an ivy charmer, a place to rest!
She steps down the path that takes back into the woods,
Seeking for the domain of her real parent,
_the good old lady mother and witch.

Theodora Oniceanu (born Lacatis) lives in a small town named Targu-Mures, situated close to the heart of Transylvania, Romania with her husband, her son and their cat. She followed the classes at the Faculty of Letters at the University of Petru Maior Transylvania and the ones of sociology at the University of Spiru Haret, Bucharest. She is passionate about arts and crafts, she also loves sports, travelling and photography, enjoys good quality music and, of course, books. She's been writing since age nine but with interruptions. Now she feels that she has the necessary time to dedicate part of her life to writing.