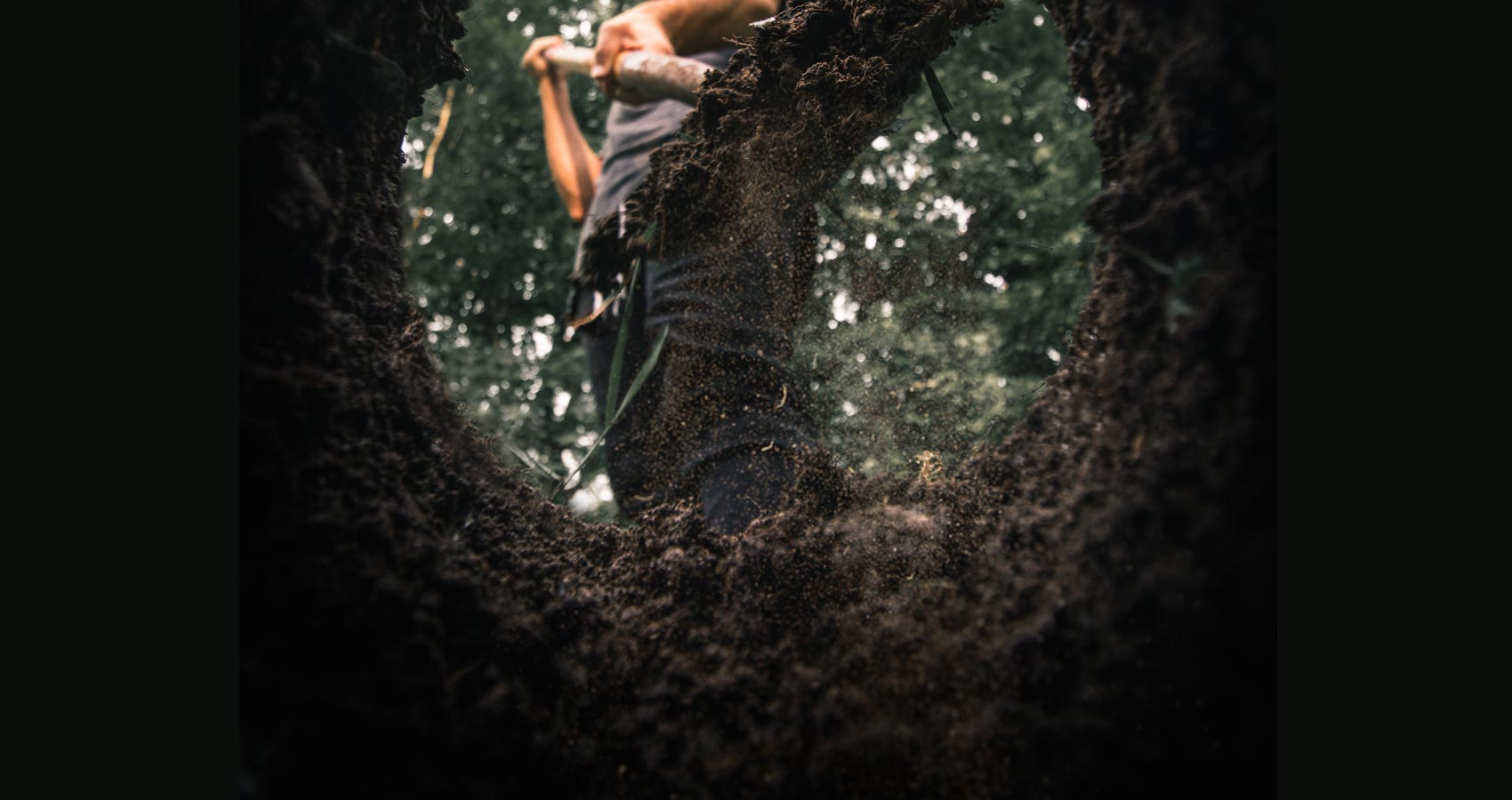 On the 18th of January, upon the occasion of his thirty-sixth wedding anniversary, Boris began digging a hole. On that mild, sunny morning he started constructing the hole in his front yard with a long, black-handled shovel.
Neighbours and passers-by stopped to observe him dig. They gazed interestedly at him labouring in the fresh earth. As he continued digging a small crowd gradually gathered by the fence to watch him at work. The crowd grew larger. He kept digging.
As Boris turned the brown earth with his shovel, droplets of shiny sweat rapidly trickled down his face to drip onto the ever-growing piles of fresh soil around him.
“Why is he digging?” he overheard someone in the crowd question.
Boris ignored them. He dug methodically. In his mind, he dug for tomorrow, in preparation for what may be to come, he dug for yesterday and the memories his repetitious movements brought forward and blurred. The recollections were both good and bad, pasted and folded into one steady stream of peaceful forgetfulness. Also, he dug for here and now.
As Boris dug, he created a rhythm that seemed to place him in harmony with the world around him. He hummed his small tune in the great orchestra of the universe and imagined shooting stars, comets racing with haste across the dark expanses of outer space. Immediately above, in the darkness, was the nothingness of infinity. He felt his heart beat rapidly, imprisoned within his body, and when the comets’ brightness faded to the very edge of visibility they seemed to explode in a splattering of cheap fireworks and disappear altogether into the welcoming darkness.
“Everything is in its own time and place,” he whispered.
The comets flashed in a microsecond of perpetual nothing, and each time they disappeared Boris was brought back to just one small reality: the hole, where his shovel repeatedly, rhythmically returned to the earth to collect another load of fresh soil. To his thinking, everything that had ever existed must follow a familiar pattern–the key seemed to be to replicate the rhythm of that universal code.
“What’s that hole for?” he heard someone in the crowd call to him.
Boris followed the beat of the rhythm he had created and blocked out everything around him. One, two, three; four… There was a mirror in the sky–it was the Sun, and he felt as though he could step up towards it to lean forward to be, slowly, drawn inside. He reached out with his mind and the mirror of the Sun quivered and shimmered with his touch as if it were only water. It enclosed around his head and torso until he and it were almost one.
Dark and light then joined in unison and he watched himself being born. He saw his own small light in the Universe, a little spark surrounded by the nothingness of all-embracing loneliness. Everything else; everything around him was mere illusion. It disappeared with increasing alacrity as his lonely beating heart and weary mind joined together to rest beyond distant stars. He saw his dead father, and the other family members who had joined him. One of them was a woman, one whom he had loved with all his being, and now he could finally acknowledge how she had left him alone on this planet. It was six months before, when her cancer had finally claimed her. Her presence was still everywhere throughout the house–it taunted him in his sadness for the guilt he felt for still being here when she was gone… And there was more…
As Boris sensed the Earth rotate in space and time, everything he had ever felt, seen, known was but a thousand trillionth of a thousand trillionth of a trillionth fraction of itself. Ice ages came and went in thousands of Earth years turning into years by the millions and, still, they remained insignificant to the infinite movements of time itself. Continents shifted, planets exploded then re-joined in their loose particles to but explode once more, and all the while there was nothing… nothing but everything, turning and re-birthing for eternity from somewhere where a logical beginning didn’t seem to be.
Suddenly, the experience was over. He was back on the ground with the shovel moving in his hand: one, two, three; four… To breathe, and exhale… breathe, exhale; his rhythmic strokes in tune with the universal song of everything that had ever been.
Every breath I take has already been exhaled.
“He must be looking for something with all that digging,” a voice sounded. “Hey, mate! What are you looking for?”
Boris stopped digging. He rested his frame upon the shovel handle and, briefly, he closed his eyes.
Turning his head, he softly spoke: “I was looking for everything, and I found it. It was nothing…”
He stepped up out of the hole he had created and walked to his front door. Stopping briefly to wipe his feet on a mat, he stepped inside and closed the door firmly behind him. After a time, the crowd slowly dispersed.