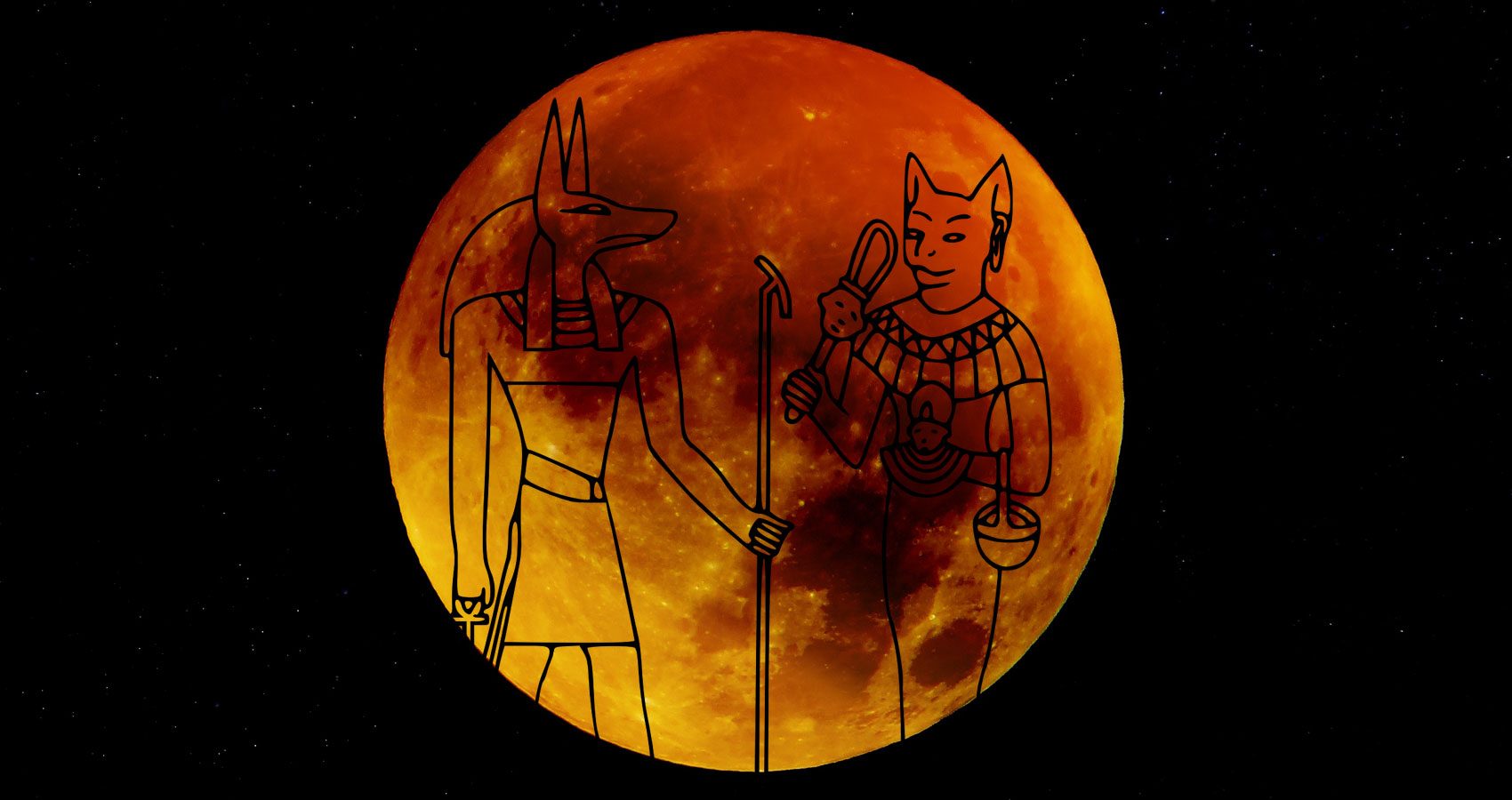 Excerpt from Hashtag Magazine, May 2018

The world is still coming to terms with the aftermath of yesterday’s so called 5K Super Eclipse (scientific name, Extended Solar Event, or ESE), which plunged the earth into complete darkness for six hours. The last known ESE (#ESE1) took place 5000 years ago, and according to scholars of ancient history, triggered several plagues and natural disasters later mentioned in various religious texts. Whilst we may not have seen plagues, earthquakes or volcanic eruptions (yet), the world has descended into chaos following the apparent re-animation of Egyptian Gods, Anubis and Bastet.

Egyptologists have long claimed that Anubis (referred to by scholars as Protector of Tombs, Guardian of Scales, Embalmer, or Guide of Souls), and Bastet (Goddess of War) were laid to rest in the Valley of the Kings in Egypt on the very day of #ESE1, and that yesterday’s #ESE2 triggered their reawakening. Whatever the story behind it, what we do know is that Anubis and Bastet (or #A&B as they’re known) are back, and they’ve got big plans.

Within hours of their reanimation, #A&B broadcast simultaneously on every TV and radio network in the world, and in live posts on Facebook, Instagram and Twitter:

“When we were last on earth, the Gods of the place you call Egypt reigned supreme, and believers followed us without question. In the years since we left, the so-called Gods that you follow were nothing but human creations, supported by lies and fake stories written by the few to control the many.
We return to find that you have created many more false gods, mere mortals with human vanity and human greed, which you worship through the tools you call social media.
This will stop, or you will know the force of our anger. It is before us, and us alone that you will kneel in supplication. All who you have followed before us are of no consequence.
We are the true gods. You will follow us.
Unbelievers will be destroyed…”

World reaction to their claims that every religion followed by mankind is fake has been cataclysmic. Erstwhile devout believers have risen up in a unified and global protest movement #FakeReligion.

In London, the Archbishop of Canterbury and several senior clergy members had to be rescued from Westminster Abbey after what eyewitnesses called ‘a howling mob’ burst into a meeting of the General Synod. In the US state of Texas alone, it’s been reported that just this morning, 25 TV evangelists have been dragged from their mansions, been forced to watch their churches burned to the ground before they were publicly stoned to death, as erstwhile believers, most of whom live below the poverty line, have joined the #FakeReligion protest, fuelled (and some say controlled) by social media. There are also unconfirmed reports that Mexico will demand reparations from Spain for the conquest of the Aztec culture in the name of the Catholic church.

If these rumours are true, it could set a precedent for every country that has suffered oppression in the name of religion.

Social media has been quick to pick up on this global religious revolution. As of this morning, in addition to #FakeReligion, the top trending hashtags were: #FakeBible #JesusWho? #PersecutionMeToo

Media Analysts are suggesting that far from being a symptom of modern times, as witnessed in previous mass protests, this use of social media to fan the flames of global protest movements may be a precisely orchestrated campaign by Anubis and Bastet themselves to grab worldwide attention. If this is the case, this use of social media as propaganda will be unprecedented, surpassing everything the Russians did during Donald Trump’s presidential campaign.

Since coming back to Earth, Anubis and Bastet have been feted by world leaders, all trying to outdo one another to gain the favour of these once-mythical deities, by showering them with ever more extravagant gifts. US President Donald Trump tweeted yesterday that it was “no coincidence that Anubis and Bastet reappeared during his presidency”, and that it would be “pretty neat for them to meet him at the White House”. President Trump has also reportedly handed over the keys to Maralago, his Florida retreat, and Trump Towers in New York and Chicago to his “New Best Friends”. However, #45 was tight-lipped when asked why he has refused to publicly condemn the attack on Vatican City and the murder of the Pope, and so far has also refused to answer pleas for support from Alt. Right Christians, Religious Conservatives and Creationists, many of whom were the backbone of his support during the 2016 Presidential campaign.

Certainly, it seems that Anubis and Bastet are extremely savvy about getting their message across, first taking over social media and other communication networks after their reappearance, and continuing with their own accounts, each sending messages and statements every few seconds. Within minutes of being set up, @OfficialAnubis and @OfficialBastet accounts on Twitter attracted over one billion followers each on Twitter. This number is reportedly rising by half a million followers every second. Conversely, the Top 50 most followed Twitter accounts – the likes of Katy Perry, Justin Bieber, Rihanna, Taylor Swift, Kim Kardashian and Kanye West are losing thousands of followers each minute, and some have even been mysteriously deactivated.

The most asked question on Google is ‘Who are Anubis and Bastet?’, and for the first time in the company’s history, Facebook actually crashed and was inaccessible for an hour because its servers couldn’t cope with the surge of interest in the new accounts. Meanwhile, things took a more sinister turn when YouTube issued a statement that they have been unable to cope with the numbers of videos uploaded to their site containing graphic scenes of violent deaths of prominent figures at the hands of protestors. Twitter, Facebook, Instagram and YouTube have all refused to comment on any recent activity on their platforms, but speculation is rife that when it comes to self-promotion, Anubis and Bastet are on a mission to be the only players in town.

Seemingly oblivious to the scale of global controversy that surrounds them, Anubis and Bastet are moving fast and becoming THE names on the social scenes, and have open invites to the ‘places to be seen’ that were once the exclusive domains of the likes of Kim Kardashian and Kanye West – who, if rumours circulating around town are true, are now doomed as soon-to-be-forgotten ‘celebrity has-beens’, no longer welcome at any of the top nightclubs or restaurants.

Certainly, such is the increasing popularity of #A&B that photographs of them together are already commanding six-figure sums for the paparazzi who circle celebrity haunts like hungry sharks hoping to transform the briefest glimpse into a life-changing sum of money. Hashtag Magazine have captured these images of Anubis and Bastet taken in London’s Russell Square last night.

This could be the dawn of five thousand years of media worship, the like of which hasn’t been seen since the heyday of Princess Diana.

You heard it here first. I grew up a huge lover of film and television. With very creative parents, I knew this was the path I wanted to take into industry.
I took the plunge, knowing how difficult it would be being accepted, and applied for BA Hair, Makeup and Prosthetics for Performance at the London College of Fashion.

And here I am today! After 3 years of hard work, I have finally graduated as a trainee Hair, Makeup and Prosthetics artist and I’m searching for any opportunities that will give me the experience I need to grow within the film and television industry.