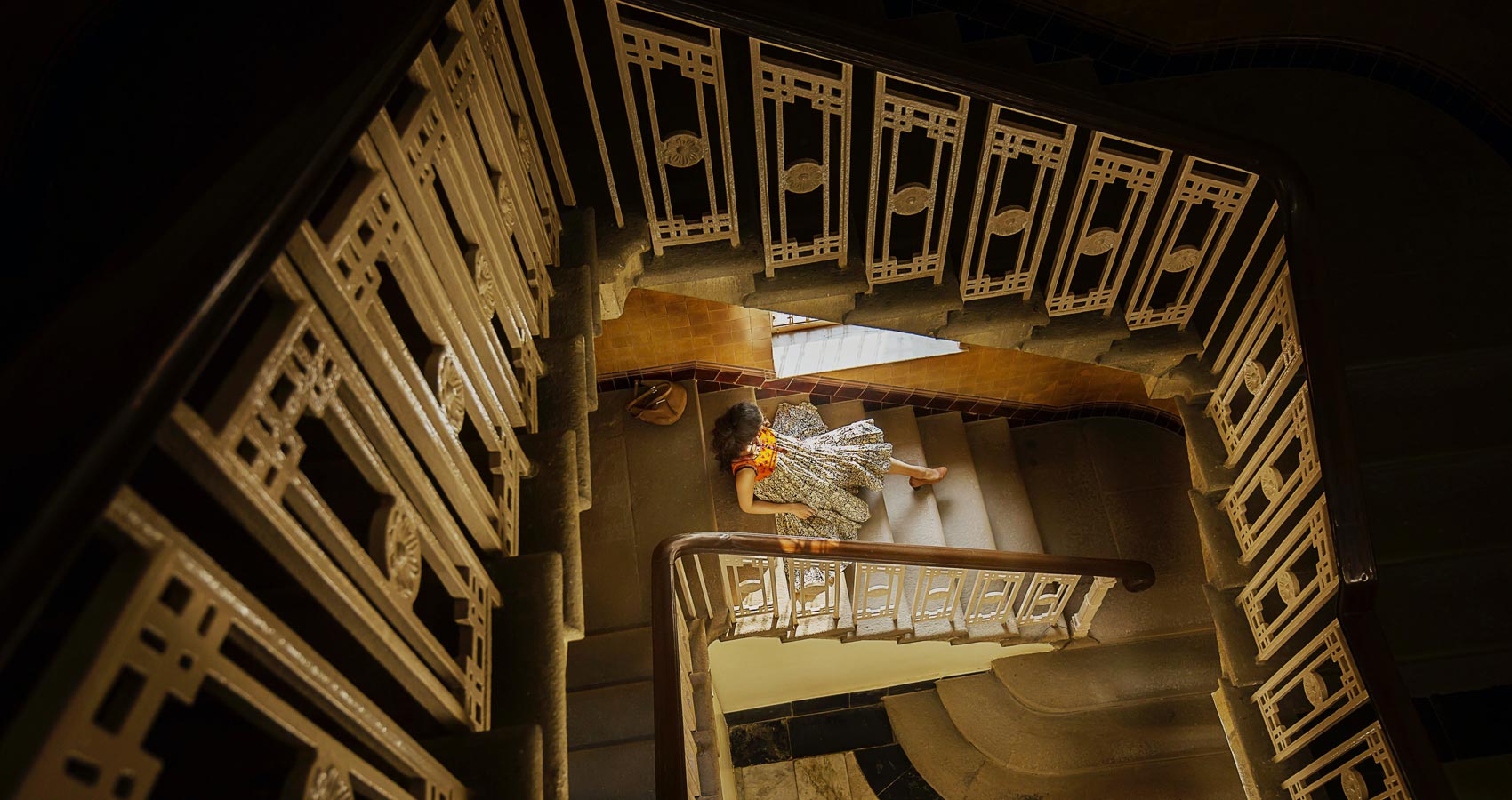 Richa stood waiting for forty-five minutes under the sun to catch a bus. The sky had burst into a flame of betrayal. She felt she was worse off than a stray dog in a shade. Generally, Richa took her car to school, a ten- or fifteen-minute drive. But that day it was different. Everything, even the car, which wouldn’t budge in the morning, connived to make her day a disaster. To think of walking at least an hour in the heat, made her weak in the knees. She looked around hopefully. No, not even rickshaws in sight. Cursing herself she ambled. The day had begun on a wrong note. The car refused to start, no matter how hard she tried. Exasperated, Richa took a bus to school only to hear the terrifyingly numbing news of her student’s death. It crumpled her inside like a piece of paper. Then the sickening condolence meeting had to be attended and the school was over early. Her student, her favourite pupil. He wasn’t anymore. She stopped, looked vaguely, and began to walk. Her stomach turned as the deadly heat burnt into her flesh, preventing a brisk walk. Ambling along without an umbrella seemed to be a nemesis, she thought, for an unrecognized sin she might have committed. The day’s claws were poised to tear her apart. At last, she reached her destination, but the ordeal was far from over. The lift too, she realized, with a shock was out of order.

The climb through the unusually steep stairs to the third floor was sheer cruelty. It generally was, but that day it drained her dry. Panting hard near the door, she thirsted for a glass of ice-cold water, but the maid, infernally sluggish after a siesta was late as usual to answer the bell. But in spite of her suffering, a sigh of relief escaped Richa’s lips as she entered her lavishly decorated flat. The unforeseen trials and tribulations of the day seemed unreal at that moment. But that feeling was transitory. She switched on the bedroom fan; it rotated for a second and then stopped. There was a power cut. A blind fury enveloped her. No use relaxing. She went to the washroom to cool herself.

As she showered, Richa recalled the day’s events. It was impossible to reconcile herself to what had happened. Listless, she walked inside the bedroom. Newspapers she hadn’t touched were lying on the bed. Cursorily she leafed through them. Inside her head was a continuous whirlwind. In the bare teacher’s lounge, she had sat with her hands on her cheeks unable to figure things out. The boy had attended class yesterday; there was always a smile on his chubby face. Eyes closed, she tried to remember…..

Unbelievable. Unbelievable that she was still alive while the boy…..; no she couldn’t. She couldn’t go for the last farewell like the others. In a flash, the face of her son appeared. Richa hankered after the warmth of her son’s bear hugs but he was far away at that time.

The cell phone rang. An unknown number. A male voice asked her name and introduced himself as an employee of the bank she had taken a loan from, to buy a house. The caller insisted on a visit, to verify her address. Richa annoyed, was in no mood to comply. Fatigue was taking over. But the voice was important. It only took seconds to realize that refusal would mean a delay in paperwork and consequently, sanctioning of the loan. She acquiesced. Time passed. The day’s calamity appeared in bits and pieces, punctuating the tedious wait for the man. Each recollection of her pupil created piercing wounds, the pain underlining the irretrievable loss she would have to confront in class every day and perhaps for a long time. But irritation got the better of her. The caller had assured her that he would certainly arrive within fifteen minutes. Still, there was no sign of him though nearly an hour had elapsed. Lunch was postponed. Richa sighed as she closed the windows to ward off the searing heat outside. Suddenly, through the glass window, she saw a man entering the housing complex. It must be the bank employee, she surmised. The wait was insufferable. He needed to be given a piece of her mind for making her suffer in this heat. But all her resentment vanished when the door was opened. The plight of her visitor could not invite remonstrance she wished to spew out a while ago. He was a teenager of nineteen or thereabouts, completely soaked with perspiration, a handkerchief tied to his head, panting with exhaustion and apologizing for arriving late. Richa ran and switched on the fan, which to her delight was working. The maid was ordered to bring a cold drink for the visitor. Vicariously suffering, she offered him a towel which he politely refused. He then took out the handkerchief from his head and wiped his face, astonished at the reception from the lady of the house. Her patience gave him time to recover. Unaccustomed to walking in the grueling heat, Richa had felt the agony that very day. She urged the boy to drink the lemonade.
‘Thank you ma’am, I’ll have it a little later. Would you please give me an address proof?’
‘At present, there isn’t any, since we shifted to this flat only a month ago and have yet to get my new residential address on ration cards, electricity bill, etc. They are in progress, however.’
‘But ma’am you’ll have to furnish me with some proof of your residence here. A gas receipt perhaps?’
‘Maybe, but I’ll have to look for it.’
The receipt was unavailable even after rummaging through the drawers.
‘Sorry I can’t provide you with any kind of receipt right now.’
‘But it won’t do. You’ll have to give me some proof.’
‘I know, but what can I do! Perhaps I may have a word with your manager and tell him about my problem. Will you give me his number?’
The boy rang up his direct superior. ‘I am at Lyons Range, Mr. Roy. No sir, I’ve not received any document. She says, she won’t give any’.
It was a lie. A blatant lie. After the conversation, she exploded. ‘I didn’t give you! How could you say that?’
‘Yes, you didn’t give me any address proof. Is it a lie?’
‘That is different. Did I tell you I won’t give you any? Didn’t you see that I tried to find one? After making me wait for nearly an hour without lunch, you’re lying and for no reason at all! Is this how you behave with your clients?’
‘Look madam, I’ve got to do my job. I need an address proof. I have been sent here for this purpose only.’
‘Very well, but why did you lie to Mr. Roy?’
‘I only told him you couldn’t furnish any proof. Is it a lie?’
‘Yes, it is. Because you didn’t say ‘couldn’t’ but ‘didn’t’. I’ll definitely complain against you for this behavior!’
‘How have I misbehaved?’
‘You have lied about me, that’s how’.
‘I didn’t mean to ……..please ma’am I’ll lose my job….’ Richa’s face hardened. Too infuriated to reply she kept mum. The boy’s face was blanched with fear. He trembled inside. Richa looked impervious to any kind of pleading. She was all stone and rock. The soggy earth quickly dried up by the latent heat of unbridled rage. He still made an effort.
‘Ok. I’ll report that your address is genuine but you don’t have any documents. Only don’t complain, please madam!’ With a face shriveled with agony, he walked to the door, wiping his moist face. The drink was still on the table. Richa’s eyes flashed on it for a second, bearing no impact whatsoever. Fuming, she refused to give it a thought. Nor could she provide any excuse for this gesture of hers. Disorientation. She tried giving it a satisfactory name. He was gone. The drink stood staring at her face. Vanity. The drink was still there. Ego? Yes. There was no playing hide and seek anymore. The boy, a fledgling, a mere child, a little older than the pupil she lost!

Food tasted unusually bitter at lunch, though she was ravenous. Images of her son without a headgear, rushing from door to door would come. It left her shivering. Minutes ticked by, and Richa gradually fell asleep. She dreamt of her pupil with his hands tied with a handkerchief, then a station, a boy waiting for the last train—– blurred faces, the heat, and she herself, looking for something lost, jostled, pushed by people, many people. Sleep came in fits and starts, the silent eerie hall, interspersed by a bluish haze, then again a thin spiky-haired face in a school uniform reaching for the water bottle, the teachers’ lounge, an overturned chair, an empty glass; confusing, so confusing. Hands pointing. Several hands with twisted nails pointing at her. In the fading light, she lay in a maze of headgears and handkerchiefs, pulling her down, pulling her down. She woke up with a start.

Richa opened the windows to let in the cool air outside. For a few moments, she sat staring at her son’s photograph. Then she fetched herself a glass of water and sat down on the bed. From the window, she could see the fading light outside. On the manicured garden the last streaks of the melting sun topped the leaves. Then in the crawling darkness of the courtyard, she saw two shapes. They grew gigantic and more gigantic until she could bear no more. A distilled vision of a lemon coloured bottle seemed to overwhelm her. Gradually she relaxed. Her face took on a determined look. Richa picked up her mobile. Then she pressed the ‘recents’ button. Her fingers trembled and simultaneously a rebellion surged inside her, but she quelled it. Her heart beat fast as she pushed the callers’ icon. There was a tinkle at the other end, and then a voice. She smiled. It was the same boyish tone unmistakably.