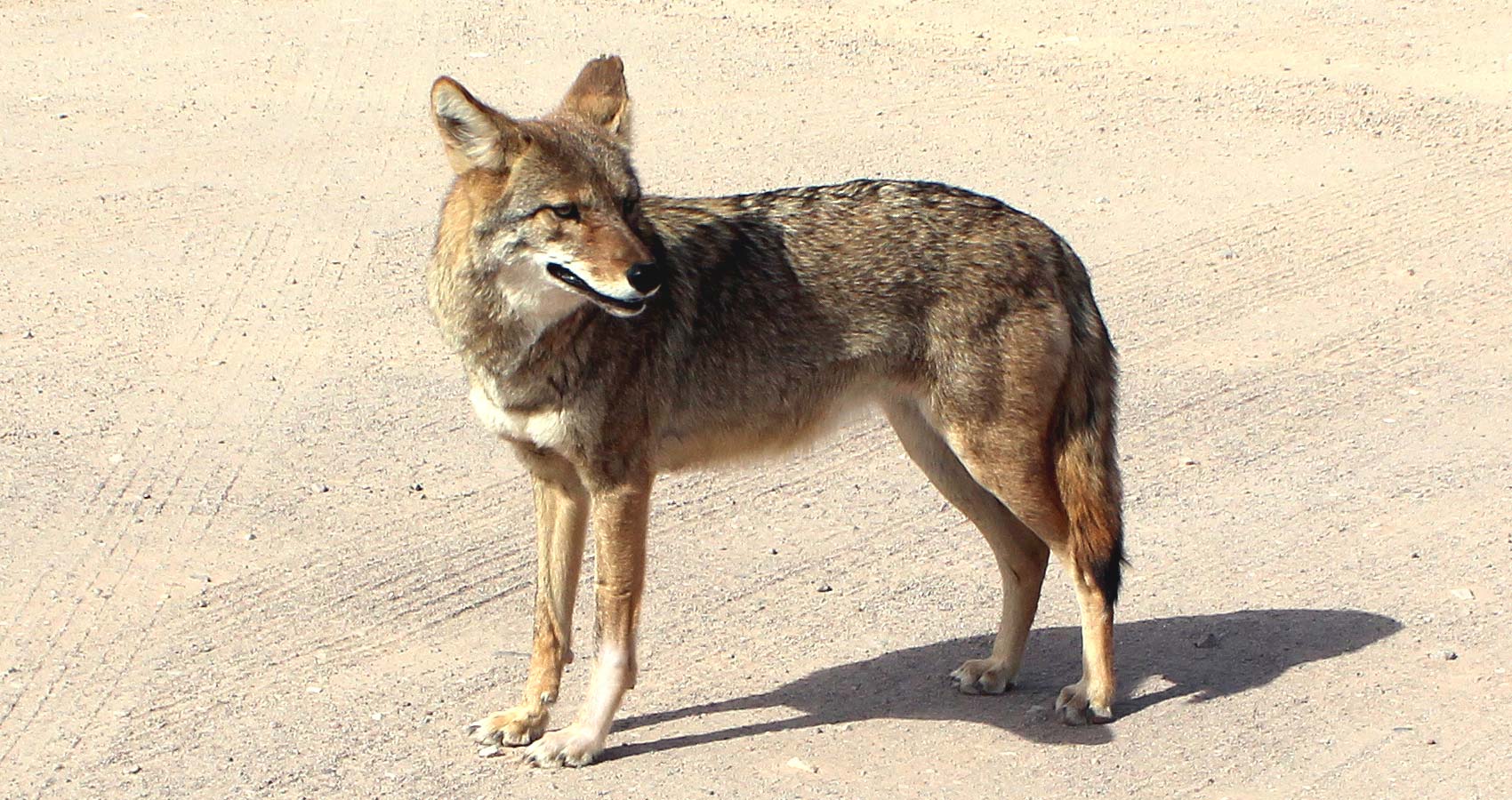 Newton was living through a worst-case scenario. One of the toughest winters anyone could remember. He was no stranger to hard times – hunger – thirst – the Sonoran summer heat – and danger. There’s always danger. Newton is a predator, the alpha male of a small pack of coyotes. About seven of them live and hunt near our desert camp at Hickiwan. Newton got his name from Sir Isaac Newton, you know, famous mathematician, physicist, the gravity guy? I’ll explain later.

It’s easiest to recognize Newton by his healthy size, and during good times his coat is a striking reddish-brown. Also, his left front paw is noticeably lighter in color than the other three. If Newton’s mate or the other coyotes are around, they don’t mess with the alpha canine. More than once, I’ve seen him turn on another coyote delivering a brief, but impressive mauling to show all who the boss is. Nobody messes with Newton.

The Coyotes here on the Tohono O’odham reservation are much bolder than the sneaky, timid variety I’m familiar with from back home in Oregon. Here on the reservation, they have a self-assuredness around humans that is a little alarming at times. I’ve seen coyotes sit, only slightly hidden behind bushes around the RV Park, tracking people’s pets with hungry eyes in broad daylight. Luckily, there have been no lost dogs to date.

Coyotes pass within 30 – 40 feet of our camp with indifference. I respond by standing up and growling when they get too close. That might sound funny, but you haven’t heard me growl. They understand dominance – it doesn’t hurt to let aggressive animals know who the boss is. One time I pasted Newton with a rock when he made so bold as to bark at me. Learning that I am armed made him cautious around our camp, which suited me fine!

This year was extra hard for all wildlife in South-Central Arizona, but to me, it was most apparent by observing the plight of the coyotes. It was a drought year. On a good year, the reservation gets barely seven inches of rain. Essential to wildlife, it comes in quick – often violent – thunderstorms causing flash floods that sweep the dry washes and fill the natural waterholes (called tinajas) in the desert. Even during the best times, the coyotes have to scrounge to live through the lean winter months. The winters are mild in Southern Arizona, but still most small game retreats to the underground, just as in the colder climates up north.

This year the rain did not come, which only served to add another layer of hardship. The waterhole near our camp where Newton’s band prefers to hunt, dried up for months. On our hikes in the desert, we routinely came across places where the pack had been digging for food, but by the time you have dug a two-foot hole to find one measly lizard or mouse, it’s not as if you’re going to pack on the weight! I also noticed many small holes dug in the low spots where water would generally stand during rainstorms. I puzzled over this a while before realizing they were digging up the Sonoran Toads that stay underground until the rains come. Hmm! Toads… the other white meat!

In December and January, I saw Newton almost every day and night. At night I would hear him crunching the sunflower seeds left from my neighbor feeding the birds. In the day, he would search around each mesquite tree to find the few dried-up bean pods that fall on windy days. He was so protective of his finds the other coyotes gave him a wide berth. The mesquite pods are tough and hard to digest. After a coyote eats these, their scat (poop) resembles something you’d use to scrub pots and pans. (I bet someone could use a little Preparation H.) But hey! Whatever it takes to get by.

On a sunny day in January, I was sitting outside on the patio when Newton came by. I didn’t have the heart to menace him. He was looking so lean and downhearted, his head and tail hanging low. He had small tufts of hair pulled from his back by some fight or misfortune. Possibly he had been skulking around the hawk’s nest that is nearby in a giant Saguaro cactus. Eyeing me warily, Newton searched around the base of the nearest tree…. nothing. He started digging here and there, finally unearthing what looked to be a couple of last year’s mesquite pods buried in the duff. I could hear him retching and gagging to get them down. It made me feel so bad to see him suffering. Here I sat with my belly full of food, sipping on a big glass of ice water. It just didn’t seem right.

A couple of days before, our neighbor had given us a whole rotisserie chicken, which by now was pretty picked over, but still had a fair share of meat on the bones. Not wanting Newton to start expecting handouts, I waited until he wandered around on the other side of the mesquite grove well out of sight, then I quietly placed the entire carcass under the tree where he had been digging.

About a quarter of an hour later, here came Newton, looking desperate and beat. He milled around for a bit before catching a scent. Suddenly his body snapped to full alert! It took Newton about 3 seconds to spot the unexpected prize. Crouching low, he approached slowly with ears back in keen-eyed suspicion. Cautiously he sniffed the carcass but stepped back with a hesitant look around, like someone about to steal a car. Satisfied it was not a trap, he executed a classic snatch-n-run play, retreating into the brush. It was no more than 60 seconds before he returned. I don’t doubt he had swallowed the chicken – bones and all.

Now Newton came back to the spot where he last found favor with the God of Chickens, to sniff around for anything he missed, but he found no prospects. You could see the wheels turning in his shifty little brain, “Where the hell did a Chicken come from??” Standing still, Newton looked all around for an answer. Eyeing me for a moment, it was clear he didn’t believe the enemy would give him a tasty snack. Looking down at the spot where the carcass had been, Newton set his mind to figuring. Then almost as if a light turned on, he looked straight overhead, slowly panning the branches above for any sign of another enchanted chicken about to fall. He did this twice before walking off. And that’s when I decided his name should be Newton.

Author, outdoorsman, David N. Purkerson lived a rural life in his cabin on the western side of Mount Hood in Oregon. In 2006 Dave decided, "The mountain's getting too crowded." He downsized further to a 29' motorhome and went "on the loose." Since then, he and his wife/high school sweetheart have been continuous travelers seeking out the quiet corners of the Western United States, "If you want to find us, we'll be somewhere west of Nebraska."