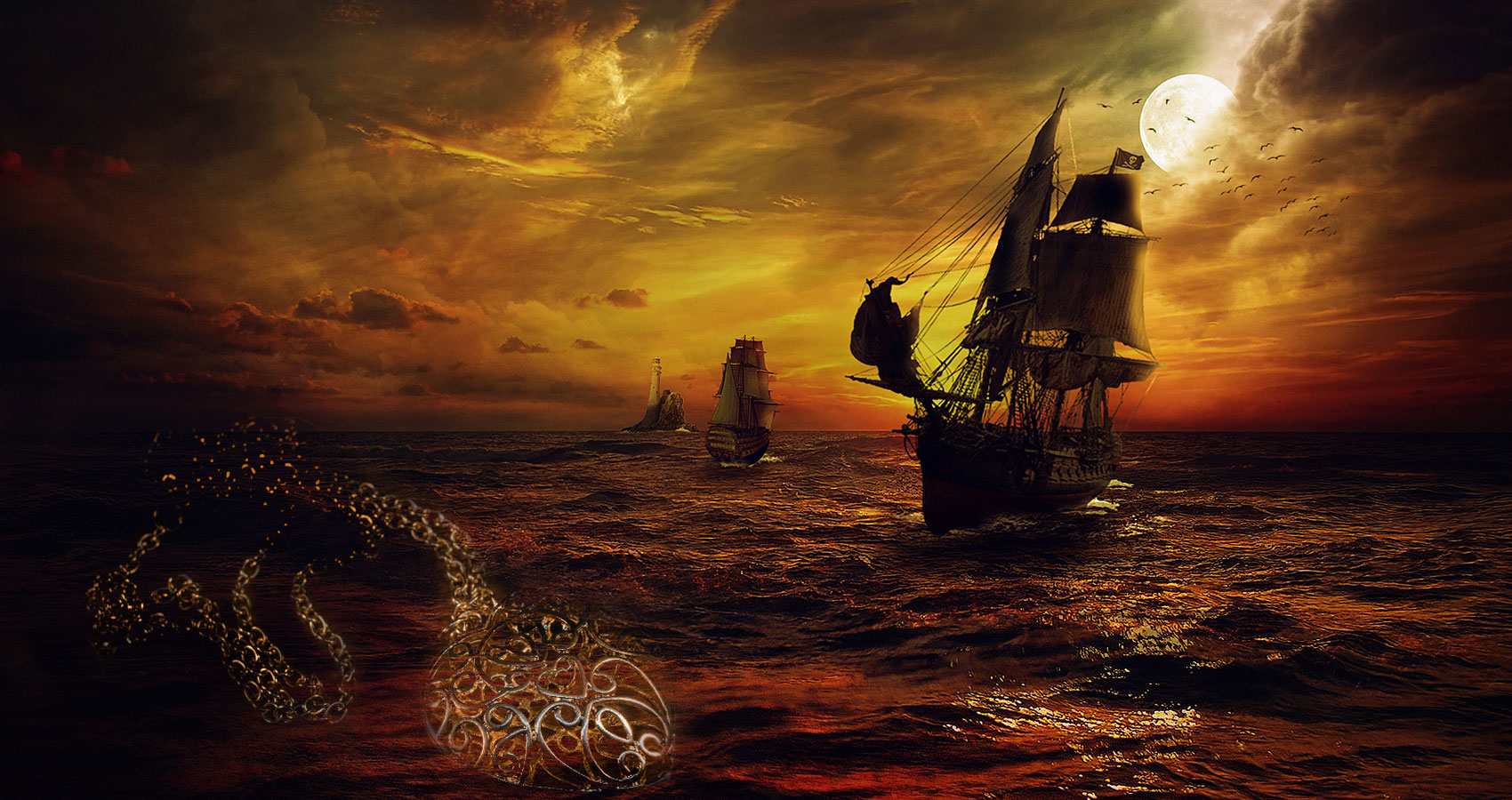 Zachary gasped, holding his hands up in surrender. His eyes flicked to the cutlass just inches away from his throat. He gulped, chuckling nervously.

“Is that… is that really necessary?”

“Okay, okay, okay! I didn’t want be the one to tell you this…” He bit his lip and raised his gaze to meet hers. “He’s dead.”

Zachary yelped as the blade pierced his skin. A single drop of blood made a river down his throat.

Zachary winced. “I-it’s true, though. I saw the body and everything.”

She cocked her head. “Where? Are you gonna throw me overboard?”

Zachary shook his head, his entire frame trembling. “He hasn’t been buried yet. We’re still preparing the funeral.”

Her eyes flashed and Zachary nearly took a half-step back. With her free hand, she undid the buttons on her cheesecloth shirt, revealing the skin beneath. If Zachary even considered enjoying the view, the urge was cut off by a scowl and a sharp blade cutting further into his vein.

“I thought this was a little harsh.”

Zachary lowered his eyes to her stomach as she moved the material away. He cringed at the sight of the long scar running horizontally across her abdomen. He could only bare the sight of it for a moment before he had to turn away. He watched her button her top back up out of the corner of his eye, only looking back once she had finished. The cutlass was still pressed into his throat.

Zachary nodded meekly and backed away to the stairs leading up to the deck.

She ordered a boat to be lowered onto the waves and all but shoved Zachary into it. She kept the cutlass across her lap, her hand curled tightly around the handle, as he rowed over to the other ship.

“What the fuck, Zachary?”

Zachary flinched at the harsh tone of his fellow crew member as they climbed aboard the ship.

“You weren’t supposed to bring her on board. She ain’t getting anything from us.”

Zachary’s gaze was fixed on the wood of the deck. “She showed me the scar,” he mumbled.
His fellow pirate sneered.

“What do you want, Abigail?”

Abigail fixed him with a glare. He raised his eyebrow.

“I want what Morris owes me.”

His lip curled. “Morris owes you nothing. And even if he did, he’s dead. You’re interrupting funeral preparations.”

“My child received no such preparations, Joshua. Morris owes me far more than can ever be repaid. Even if he is dead, which I doubt, I will get what I am due.” She looked around the deck, her gaze sliding over each and every crew member. “And I don’t care who I get it from.”

“Get back to your chores, Zachary,” Joshua ordered. Zachary shot him a grateful smile and scurried off below deck.

“You want proof of death…” He flicked his head, and Abigail followed him through to the captain’s quarters.

There was a body lying on the bed, his face pale and his chest still, his hands folded neatly over his stomach.

Abigail sheathed her cutlass and walked up to it, staring down at its face. She reached out and pressed two fingers against the side of his neck, feeling no pulse.

She straightened up and turned to Joshua. “How?”

He looked down at her with sad eyes. “Sword to the heart. I saw it happen.”

She nodded, turning back to the body. She reached out to his neck once more, hooking her fingers beneath a gold chain just visible over the top of his shirt. She could feel Joshua stiffen next to her, and expected the sharp pain of a blade at any moment – but it never came. She pulled the pendant from beneath Morris’ shirt: it was an oval of pure gold with an emerald set into the centre. Her lips curled into a sad smile.

“This’ll do,” she murmured, reaching around to unclasp it.

As she stood back up, the pendant dangling from her fist, she looked over at Joshua and cocked her eyebrow, daring him to say something. His eyes flicked between her face and the pendant, once going to her stomach.

“There’s not many who know about that,” he grumbled. “Not many who’ll notice it’s missing. I won’t tell anyone.”

Abigail nodded. “Thank you.” She stuffed the pendant into her pocket.

Ellen Grace is a Masters student who writes fantasy, science fiction, literary fiction, and poetry. She is a regular performer at Exeter's Loud and Queer open mic night.