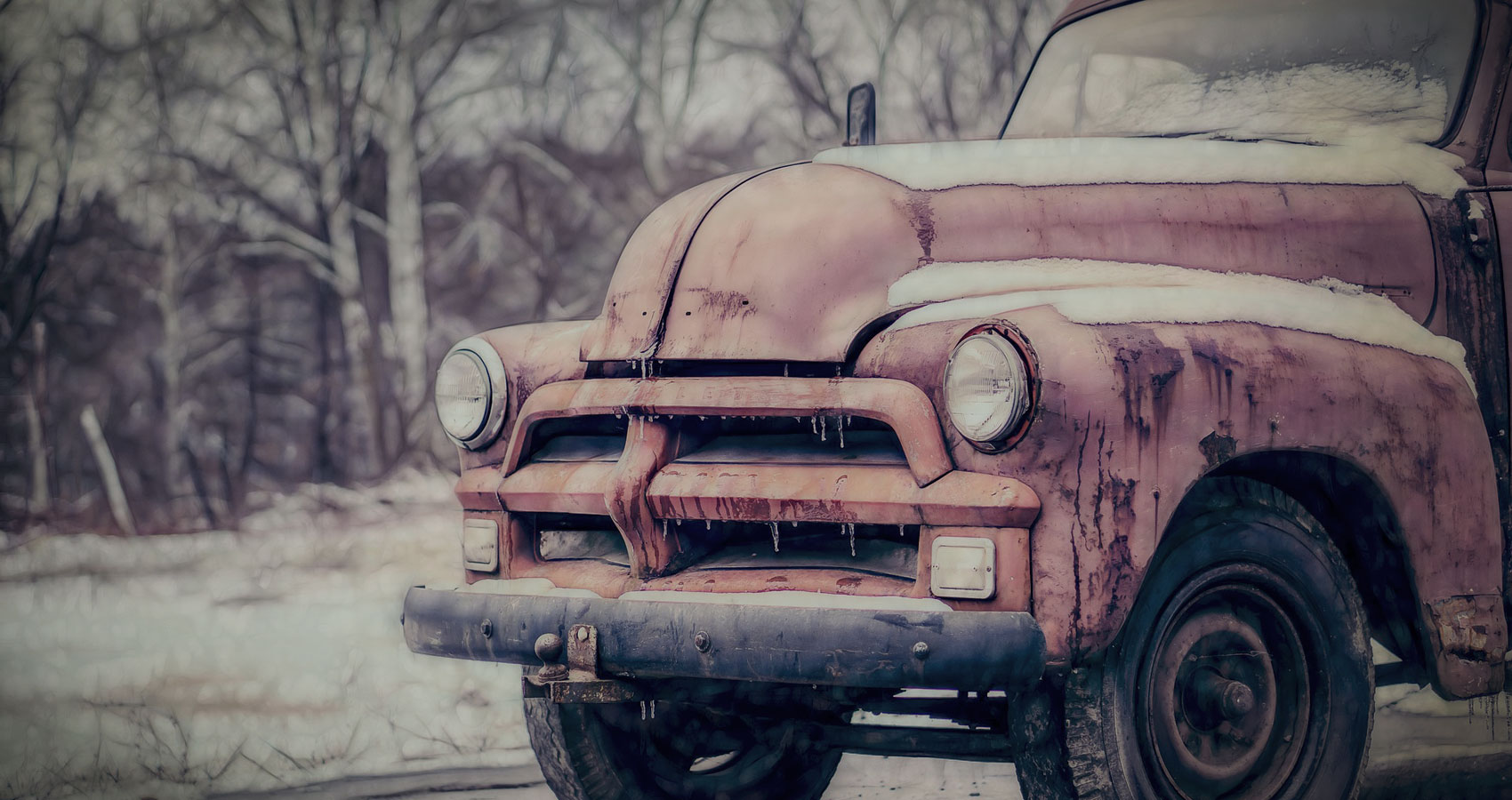 Magnificent shades of orange, pink, and blue coloured the sky.  He sat on his front bumper, savouring God’s masterpiece; a cup of coffee in his hands,  He looked at his wrist-watch and wiped the condensation from it to read the time.  It was a quarter to eight.  He threw the last of his smoke in front of him and jumped in his trailer to keep warm until someone from Davis & Sons could arrive and help him unload.

He took the blankets and padding off of the antique piano.  The kid in Toronto had told him that it was the “pièce de résistance”.  It belonged to the daughter of former Prime Minister, Charles Tupper, and was worth a whopping twenty-five thousand dollars.  He wiped his fingers on his coat and then gently slid them across the ivory keys, imagining the sound they would make if he gave them a bang.

Tony turned his head swiftly towards the man standing outside his trailer. “Good of you to show up.”

“Sorry, man.  My kids were expecting Santa.  I was the only one who fit the costume,” he said, patting his belly.  “You ready in there?”

“Pull up to the loading dock.  I’ll meet you over there.”

Tony climbed back in his cab and pulled the truck around at a snail’s pace to protect the artifacts that were now exposed and vulnerable.  He cursed himself for not having pulled up to the dock in the first place, but he had parked facing the street in case Davis went M.I.A.

After several minutes, he managed to secure his spot.  Again, he walked to the back of his trailer and wiped his brow with his coat sleeve.  The antiques were unscathed, just as he had left them.  The hands of his watch pointed to 8:40.  He lit a smoke, attempting to calm his rattled nerves.  He waited on the dock with his fists jammed in his pockets.  He was minutes from freedom, but it felt like he was standing on the dock for eons.

“What the bloody hell…Where is he?” A bird squawked.  He shivered from the cold.  Words were trapped by a cough.  He gagged and coughed and spit on the ground before him, tasting donut cream twice.

“To hell with this,” he said out loud, tossing his smoke away.  He walked the length of the building to the front of the store where he had seen the man retreat.  It was open.  He let himself in.

The lights were off.  A large, white Christmas tree, with a few blue scattered ornaments sat in the corner of the reception area.

He heard his mother say, “Those are stupid.  Why are they white?  Did it snow in Bethlehem?”
“No Ma.”
“That’s right!”

He walked up to the reception desk and knocked on the counter with his knuckles until they hurt.  “Hey…buddy!” There was no answer.  “I don’t believe this.”

Tony found a door and entered a massive room stacked from end to end with antiques of various sizes.  It was like a maze and he looked behind him, making note of the red neon EXIT sign.

“Hey!!” He heard his own voice bounce off the walls.

The lights were dim.  He squinted his eyes, and scanned the room, and listened for footsteps, but there was no other sign of life.  He walked the free path between two rows of priceless furniture.  He wondered how many thousands of dollars would burn if the place were to go up in flames.

He turned around and retraced his steps.  He searched for the exit sign.  It was gone.

“Great time to burn out, goddammit…”

He quickened his pace, sensing a chill run up his spine.  The musty, antique smell was replaced with the scent of pine and cloves.  He walked faster, kicking at the dirt floor that, moments earlier, was concrete.  He studied the goods beside him.  He was sure that they were different.  An old Underwood typewriter had vanished.  It was sitting on a half-moon table, also gone.  He lost his bearings and ran into an ancient hutch that materialized out of nowhere, blocking his path.  A Gramophone sat on the ground beside it.  There was music but it was coming from somewhere else.  It was an orchestra version of his mother’s favourite Sinatra song.  The melody was different and there were no lyrics to “It Had to Be You”.

He turned around.  The space before him was smaller and emptier.  The industrial lights above his head were replaced with hanging bulbs.  The steel columns and support beams turned wooden.  He bent over, his hands on his knees, breathing heavily.  “You’re losing it, Tony.  Wake up.  Wake the hell up!”

He avoided the phantom hutch and felt his way around the room like a blind man, until he touched a wall.  He found the exit door and turned the glass knob, and jumped from one room to the other with both feet, as if jumping off a cliff.

His eyes betrayed him.  He focused on the large dining room table that replaced the reception desk.  Pine branches were nailed around the perimeter of the room.  Mistletoe hung from the ceiling.  A large turkey sat proudly in the middle of the table, amidst bread and corn and green beans and potatoes.  They couldn’t see him. They were eating, and drinking wine and celebrating – and they couldn’t see him.  A shot of pain invaded his head.  He tried to look outside, through the heavy, red velvet drapes.  The sun was still shining.  He saw a hint of a modern-day street lamp.  He coveted it.  He inched around the room, his back to the wall, holding his breath somewhere deep in his lungs, afraid to exhale.  It belonged to him – in his time, and if he released it, he had nothing left to prove who he was and where he was from.

He felt like he was in a trance.  His eyes were glued to the scene.  Ice ran through his veins.  The mother with a protruding belly raised her glass in a toast.  The young girl wearing pigtails, laughed in jest.  The father stood at the head of the table, nodding approvingly at them all.  A young boy turned in his seat.  He looked directly in Tony’s eyes but he didn’t speak.  Tony shook his head at him and placed his finger to his nose.  The boy turned back to his plate.  Tony used all his force to open a heavy wood door – modern on the other side.  He stumbled outside and fell down the three stairs before him; void of ice and snow.  He came to his feet, wrestling with himself until he stood in the  middle of the busy street, his legs wobbling like a man sixty years older.  Cars honked at him and drivers cursed at him before a taxi driver stopped at his insistence.  He struggled to open the back door and climbed in, unable to breathe; afraid to breathe, until finally, the address left his lips.  The cab driver nodded, put the car in gear and sped away, leaving Davis Antiques in the distance.  Inside, the first born of the “sons” was still staring at his plate, curious about the funny man wearing dungarees.