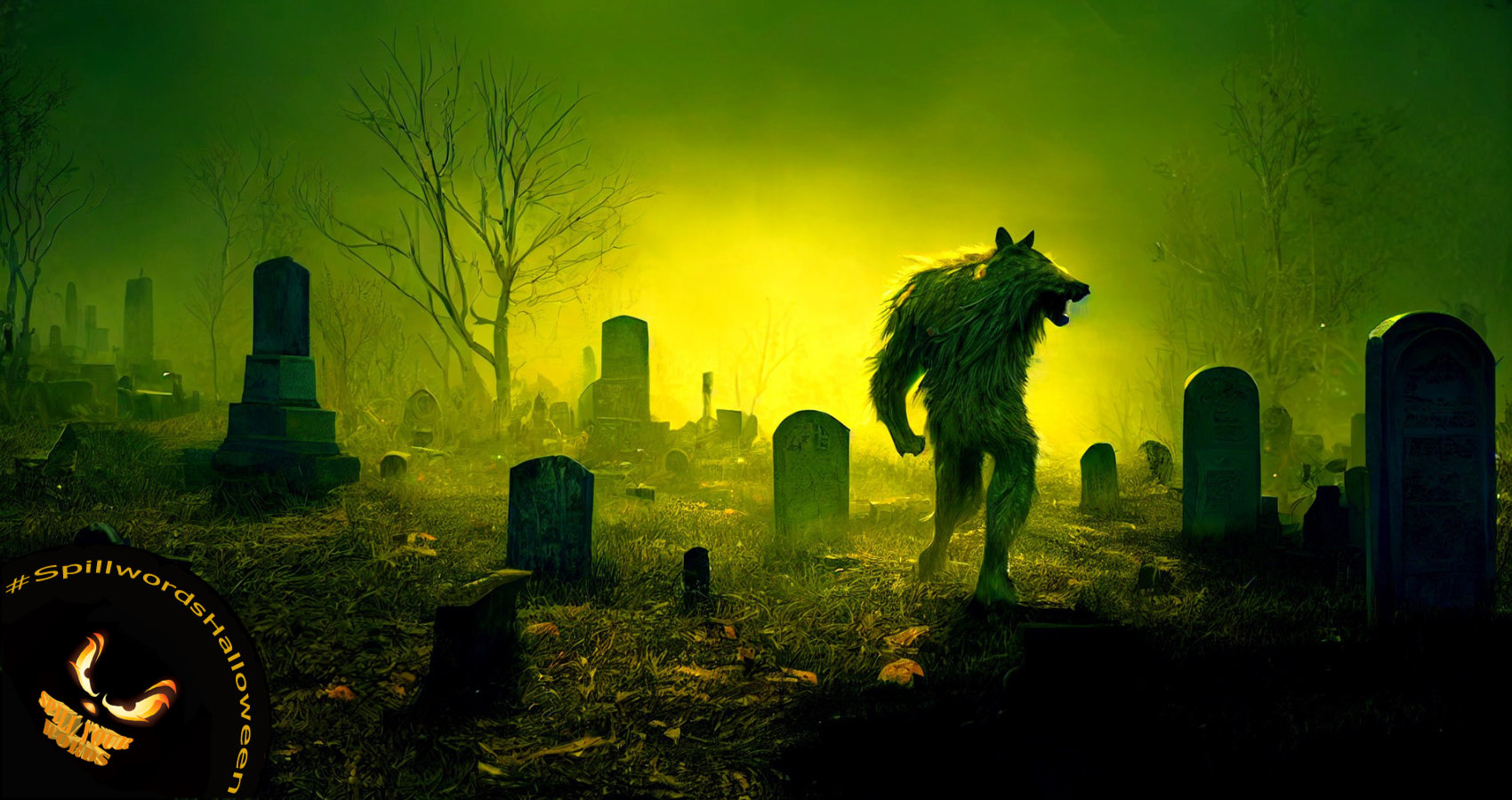 The woods were dark and deep with the only light coming from the full moon peeking in and out of the scuttering clouds. Mia shivered in her wedding dress and grumbled, “Now where the hell is he?”
She had done her part: she’d bathed and anointed her skin with herbal oil and put on her special grown, just like Lance had asked her to do. She’d gotten to the right place, the log where they’d first met, and now she was a little angry if not a lot perplexed. She’d been waiting for over an hour. Where was he?
As if he could read her mind, Lance suddenly appeared, stepping out of the forest from behind her.
“Hello there, my lovely.” His deep, rumbling, voice startled her. “My, but don’t you look beautiful tonight?”
She turned to him, “Oh, Lance. You’re finally here.” Her anger vanished in an instant. She made a motion to stand to embrace him, but he pushed her back and joined her on the log.
“Of course, I’m here my precious one. I wouldn’t forsake you. I’ve been waiting for this moment all my life.”
All his life? Mia thought to herself. What did he mean by that? But she decided to let it pass. To Lance, she said, simply, “Me, too.”
She looked at him and he smiled at her. Mia tried to return his smile but pursed her lips instead. He looked different somehow. For one thing, his teeth were bigger. His nose was longer, too. Almost like a snout of a fox or something similar. His face was hairier, too, like he’d let his beard grow, which was weird because it’d only been a couple of days since she’d last seen him.
He stood up and took her by the hand, “Shall we go?” His hand was like a paw, his nails were long and sharp. As he pulled her to her feet, one of them scratched her in the fleshy part of her thumb causing it to bleed. “Oh, I’m so sorry.” He eagerly took her hand and with a long, rough tongue, hungrily licked the blood from her cut.
Mia tried to pull it back, but Lance held on tight. In spite of her joy at finally having a boyfriend, she was getting a sick feeling in the pit of her stomach as her better instincts started to take over.
“You know, I think maybe I should pass on the party. I’m really not feeling too well.”
Lance looked at her and bared his long sharp fangs. “I don’t think so, my dear. No, you are coming with me. I can’t wait to share you with my friends.”
“Share?” Mia looked around frantically for a way to escape.
Lance put his paw to her lips to silence her. It smelled putrid like something had died. Then he raised his head back and howled a blood-chilling howl, long and loud. In the distance, Mia heard more howls, as if wolves were calling back to him. She looked at Lance and his eyes twinkled with merriment, reflecting the light of the full moon.
The realization that something bad was going to happen suddenly hit her. “Oh, no!” Mia screamed. “Oh, my, god. No.”
Lance smiled and said, “Sorry, Mia. No one can help you now.”
As his words sunk in, Mia fainted and slumped to the ground. He watched and licked his jowls as she collapsed on the forest floor. Then picked her up and flipped her over his shoulder. He turned toward the chorus of howls and howled in return before he took off running, Mia’s head bouncing on his furry shoulders.

The thing about being best friends is that you can get a feeling where you just know something isn’t right. During her shift that night, the more Stephanie thought about Lance and his party, the more she knew something was off and she had to do something. She loved Mia and wanted nothing but her happiness and what was best for her, but his Lance guy…there was something weird about him. As soon as her shift ended, Stephanie ran back to her apartment and grabbed her bicycle, and raced to Nyrstrand Woods. She needed to make sure Mia was okay. She didn’t even bother to change.

Lance loped into the clearing and called out to the pack, “Hey everyone, look what I brought.”
He slung Mia off his shoulder onto the sacrificial altar, and the ten or so werewolves howled in joy and rushed forward to gather around in frenzied anticipation.
The growling of the pack woke Mia and she opened her eyes to the ravenous werewolves pushing around her, drooling and licking their lips, snarling and baring their fangs. “Lance, help me,” she begged. “Please, help me.” She tried to sit up.
Lance shoved her down. “Never.” Then he barked an order, “Secure her.”
Within seconds a big tawny wolf wrapped her in rope and tied her to the altar. Panic set in as Mia thought, I’m doomed. I’m going to die.
The tawny wolf spoke, “It is time to begin.” He handed Lance a long dagger with a jeweled handle.
Mia’s eyes widened in terror. “No!”
Lance took a dagger in his hands. “Hold her, tight,” he commanded. Two werewolves stepped forward and held her while he made a shallow cut. Mia screamed as a trickle of blood ran down her arm and dripped to the ground. Lance put his paw under it out to catch the drips. When his palm was full, he drank the blood. “Mm. Good,” he said, turning to the pack. “She’s perfect.”
They responded by howling in ecstasy. “Cut her. Cut her. Cut her.” The werewolves chanted in unison.
Lance looked Mia in the eye and said, “I liked you, I really did. But…” And he raised the dagger over her heart to make the fatal cut.
But he never made it.
Preoccupied, none of the werewolves saw Stephanie burst into the clearing and run at Lance. “Take that,” she yelled as she grabbed him from behind and plunged her knife deep into his neck. Stunned, Lance dropped the dagger and grabbed at the wound, blood from his severed jugular vein gushing through his claws. The rest of the stunned pack stood frozen in place. Stephanie took those few seconds to cut the bindings from Mia and pull her off the altar. Then they took off running, faster than they’d ever run before. Stephanie turned and fearfully looked over her shoulder, expecting the pack to follow, but she was mistaken. Their blood lust had overtaken them and they had hungrily fallen upon Lance and were devouring him. It wasn’t a pretty sight.
Stephanie doubled her speed, pulling Mia along. “Hurry up, let’s get out of here.”
Mia was weak from loss of blood but filled with adrenalin. She held onto her friend’s hand and ran. “God, I thought I was dead for sure, Steph. You saved me.”
“No time for that now,” Stephanie panted. “Let’s keep going.”
And they ran full speed through the woods, lit by the light of the full moon, to the entrance to the park where Stephanie had parked her bicycle. She got on first and had Mia climb on and sit behind her, and that’s how they rode all the way back to town, just like they used to buck each other when they were kids.
It was nearly midnight when they got back, and the Halloween revelers were still out in full force. Mia in her old dress and Stephanie dressed as Cat Woman fit right in. Stephanie parked the bike in front of Crusty’s and they went inside, ordered coffee and two pumpkin spice muffins, and sat down, breathless after their ordeal.
Stephanie spoke first. “So, are you really okay?”
“I am Steph, thanks to you. I don’t know what I was thinking going out there in the woods with a guy I barely even knew.”
“Well, you were in love. It does strange things sometimes.” Stephanie watched as a tear formed in her friend’s eye. “Oh, Mia, don’t cry. It’ll be okay.” She reached over and caressed her arm and noticed the cut had stopped bleeding.
“I’m not sad, Steph. I’m actually happy.”
“Really?”
“Yeah. Remember. They almost killed me. You saved my life.”
Stephanie joked and said, “Well, that’s what friends are for.” After a moment she added, “We should probably tell the cops or something.”
“Think they’ll believe us?”
Stephanie thought about it for a minute and then shrugged her shoulders, “No. Probably not.” She smiled and reached over and hugged her friend. “At least you’re safe.”
Mia hugged her back. “Yep. You got that right, and I’m making you a promise right now.”
“What’s that?” Stephanie asked, and took a bite of her muffin, chewing thoughtfully.
Mia grinned, “I’m swearing off guys that look like Lance forever.”
Stephanie smiled back at her. “That, my friend, is a really good idea.”