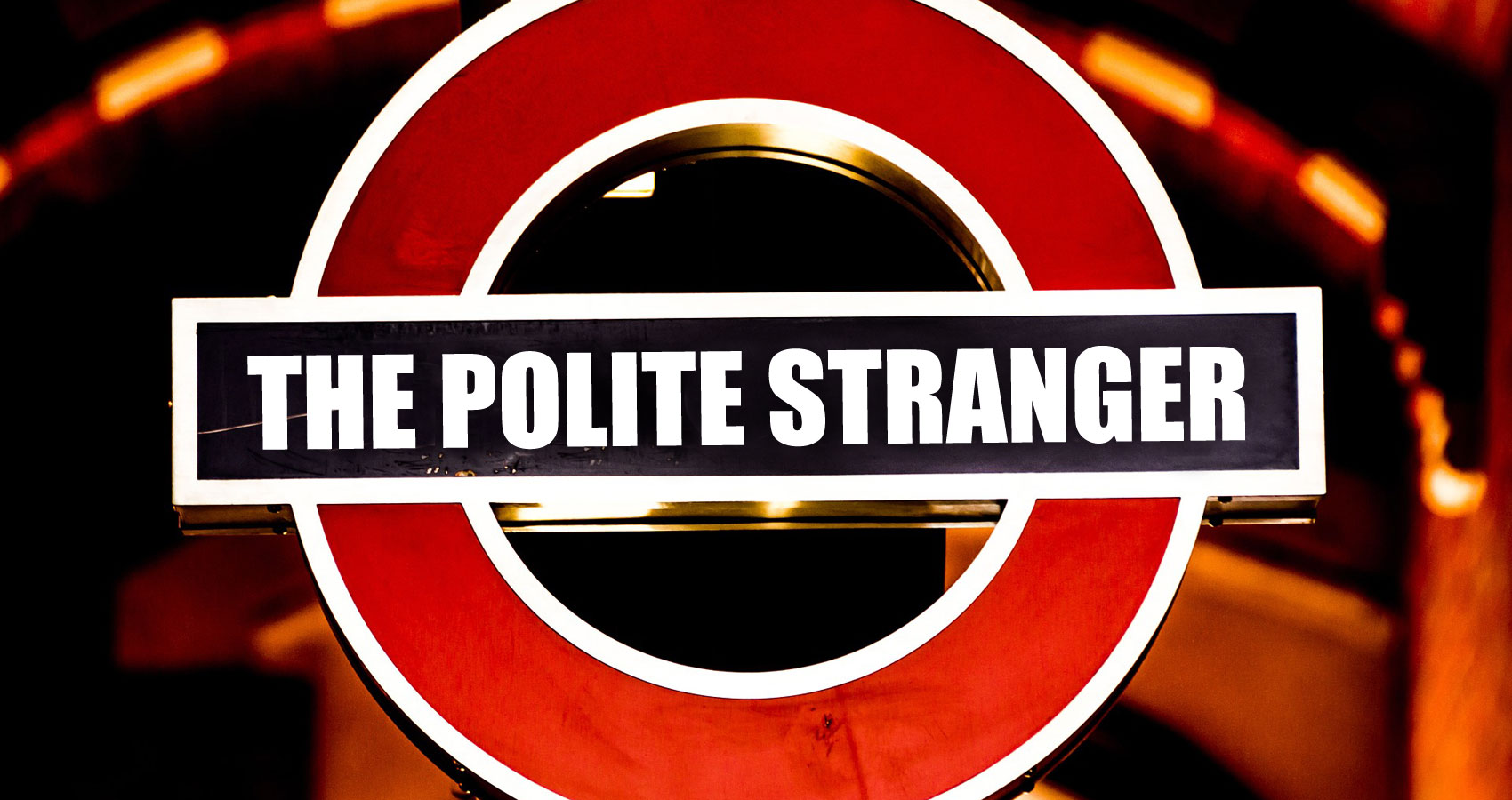 Laura looked up from her book in surprise. Accustomed to the usual undignified scrum to grab a precious seat as the train filled up, she had never known another passenger make such a polite request. She was surprised, too, that the young man had said ‘set’ instead of ‘sit’. He sounded like someone from her hometown.

‘Oh! No. Go reet ahead,’ she responded. She lowered her gaze straight back down to her book to indicate she did not wish to be disturbed, as London commuter protocol dictated.

‘Whey aye, a fellow Geordie!’ the young man exclaimed delightedly. He sat down next to Laura, laughing uproariously as if she had cracked a joke. Some passengers looked towards them, frowning. Laura felt herself blushing and slid further down in her seat.

The young man wriggled in his seat, jostling slightly against Laura as he took off his black rucksack. ‘Ooh, sorry, pet,’ he apologised. A mischievous glance in her direction told her he was not in the least sorry. Disarmed by his polite manner, Laura forgave him.

He made himself comfortable, stretching his long legs under the seat in front of him and greeted Laura Newcastle-style, with a cheery, ‘A’reet?’

He seemed oblivious to the unwritten rule about never talking to fellow passengers. ‘Not much room in these seats is there, like?’

Encouraged, he told Laura, ‘It’s belta to ’ear a voice from ’ome instead of all these posh Lunnun accents. A’ve just moved doon from Newcastle.’ He pronounced ‘castle’ with a short ‘a’, rather than ‘carstle’ as a Londoner would. Laura felt suddenly homesick and warmed towards the freckled, red-haired stranger.

‘I started a new job in Lunnun a few weeks ago,’ the young man continued companionably. ‘I’ve seen yer getting on the train at East Croydon in the mornings. Yer a’ways look so well turned oot.’

‘Really?’ Laura felt a little unnerved but flattered to think he had noticed her. She had no recollection of seeing him before. She took refuge in a witty comment, broadening her dialect to match his. ‘A’m surprised anyone notices what A look like in the mornings. A’m usually running that fast to catch ma train A’m just a blur like, mun!’

He laughed loudly and appreciatively. ‘So what part of Newcastle are yer from, pet?’

‘Oh, A was brought up in Gosforth but A’ve lived in London a good few years now.’

‘A thought yer sounded posh, like. A’m from the City meself. A’m away to Newcastle this weekend as it happens, fer the footie. Whey aye, the lads!’

Laura had noticed he was wearing a football scarf with the distinctive black and white stripes of Newcastle United. She smiled and said, ‘The Magpies should do well this season. Now they’ve signed up star striker Nathan Ashby.’

‘Well, aren’t yer a canny lass,’ he replied admiringly. ‘Yer’re the first A’ve ever met who knew anything aboot football!’

‘Only from the other side. My Da and all his side of the family are Sunderland fans!’

The train PA system chimed three notes down the scale and a female voice announced ‘The next station stop will be East Croydon.’

The young man leaned towards Laura and said warmly, ‘It’s been belta talking with yer, pet. Yer don’t need ta rush away straight home now, do yer? A’d love ta stop off and chat some more with yer. I’m sure yer know where ta get a decent coffee around here.’

‘A’m afraid A’m married so that wouldn’t do at all. A’d prefer to get straight home.’ Laura said, stiffly, to hide the unexpected rush of sadness she felt at not being free to accept his offer. She expected her reply would silence him but, annoyingly, he picked up the note of regret in her reply. He began to tease her. He was a clever charmer, playing her like a fish on a line.

‘A noticed yer ring, pet. But why did yer say yer’re afraid yer’re married? What does that mean? Are yers happily married? Would yer stop off fer a coffee with me if yer weren’t?’

She did not like the mocking tone of his voice so she ignored him. She reached down by her feet for her bag to put away the abandoned book.

‘So, what are yer afraid of?’ he persisted. ‘That yer mun would find oot? It’s just coffee and a chat wi’ someone from ’ome. So where’s the harm?’ His grey eyes glittered disconcertingly at her. He was enjoying her discomfort, Laura realised.

‘I mean, I’ve had a long day at work and all I want right now is to get home. I don’t want to stop off for a coffee. Not with you or anyone,’ she said firmly and with as little trace of a Newcastle accent as she could manage.

The train was pulling in to the station so Laura thankfully picked up her bag and prepared to leave. The young man jumped up out of his seat. He made her pass by him to get to the door with an exaggeratedly polite gesture. ‘Ladies first. Sure yer won’t change yer mind aboot that coffee?’ He put his head on one side, raised his eyebrows and gave a simpering half smile. Laura found the resultant pleading puppy expression off-putting rather than inviting.

‘You really don’t give up, do you?’ She was instantly angry for rising to the bait and allowing herself to be goaded into answering him.

A man who had been standing in the aisle near them the whole time chipped in, ‘Hey mate, the lady said no. Leave her alone, can’t you?’

Laura flushed with embarrassment to think that their entire conversation had been overheard by other people in the carriage. The second the train doors opened, she fled along the platform, pushed her way through the ticket barrier and turned towards home. She dared not look to see if a tall, red-haired man was among the crowds spilling out of the station exit.

The familiar walk home in the warm evening sunshine calmed her. He had not meant any harm, she reasoned. Most likely he had simply been amusing himself to enliven an otherwise boring train journey. Still, she hoped she would not run into him on the station platform in the morning.

She told her husband about the encounter when she got home.

‘What, some guy tried to chat you up on the train? That’s hilarious!’

‘Well, it’s nice to know I’ve still got it, AJ,’ she countered and struck what she hoped was a sexy pose. AJ burst out laughing and planted a kiss on her pursed lips. He made his way upstairs, still hooting with laughter.

Laura went into the kitchen to start cooking dinner. A few minutes later she heard AJ calling her.

‘Laura, come up here, quick.’ She ran upstairs at once, alarmed by his strange, strangled-sounding voice.

AJ was standing in front of his desk. He looked deathly white. As Laura approached, he turned his laptop towards her. A local news website was carrying an appeal for information about a man in his twenties, six foot tall and with a Newcastle accent. He was wanted in connection with sexual assaults on young women travelling on trains between Croydon and London Victoria. ‘Is this him?’ AJ whispered hoarsely. He scrolled down to reveal an artist’s impression of the suspect.

Laura stared in horror at the screen. It was a remarkably accurate sketch of the red-haired young man who barely an hour ago had so politely asked to sit next to her on the train.