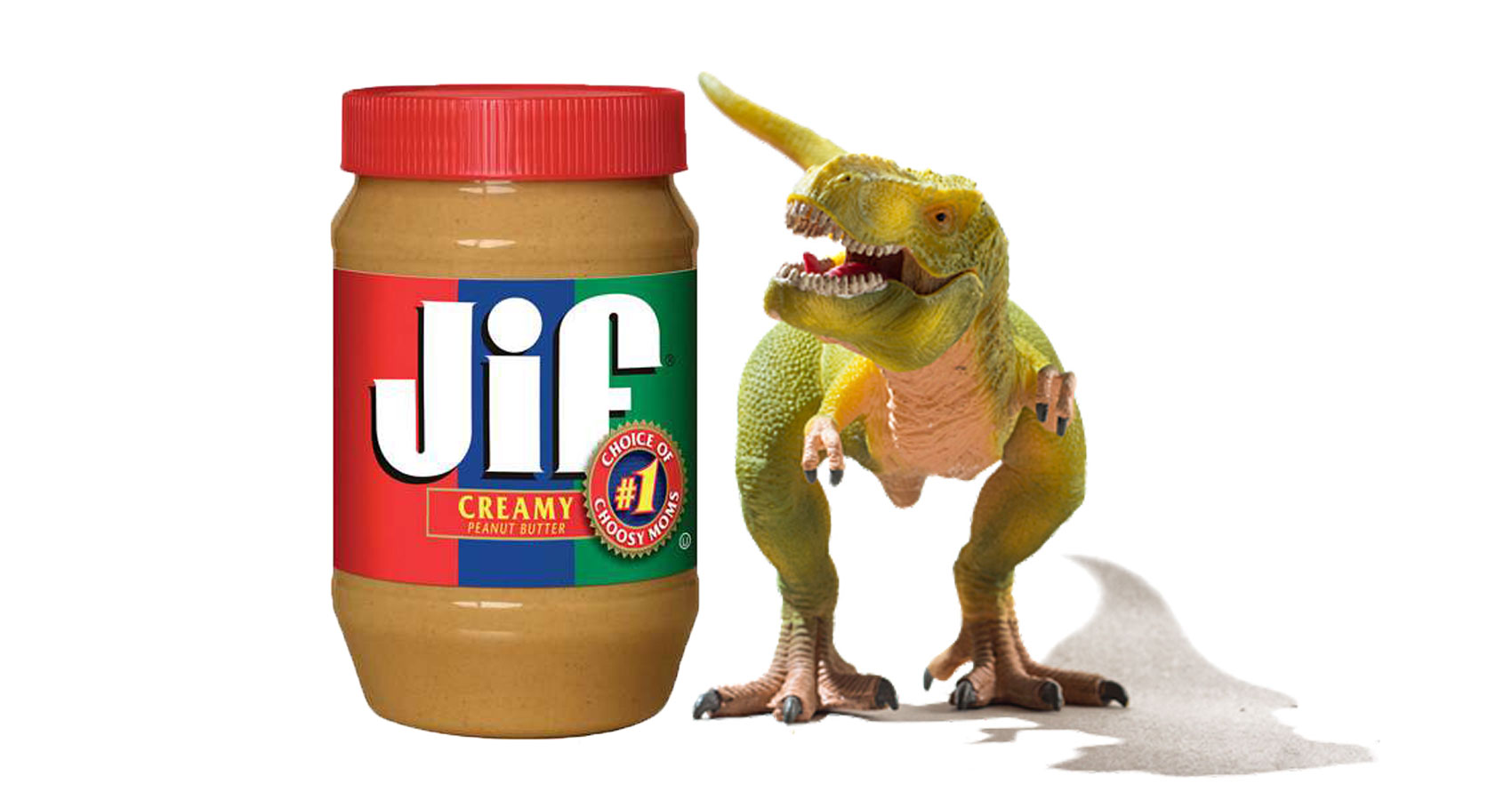 A Jar Of Jiffy And Tyrannosaurus Rex

A Jar of Jiffy and Tyrannosaurus Rex

It was the getting away with it that I liked the most. My beat-up headboard had two innocuous sliding doors that, as far as Mom knew, hid a plastic miniature brontosaurus, stegosaurus, and Tyrannosaurus Rex, along with an assortment of marbles, pink and blue jacks (the rubber ball gone missing), my frayed Chinese jump rope, and random game board pieces whose original boxes were long gone. Who would ever think to look for a jar of Jiffy alongside the multiple saurosi and stray checkers? No, it was the perfect hiding place for the forbidden.
Mom was trying to starve me to death, surely she was. Or at least keep me from the smorgasbord of delights available in this world to ten-year-old girls. I knew because of what I sneaked at Lynda’s house. Ahh, the Toll House cookies nestled in the opaque glass jar with the aluminum lid that clanged if I wasn’t careful. One time when I sneaked out to the kitchen in the middle of the night, I wasn’t, and when I dropped the lid in the sink Lynda’s mom came flying out of her bedroom in her rollers, her mouth a perfect “O” of disapproval. It was mortifying but worth it.
I never had to worry about getting caught in the open like that at home because there wasn’t a cookie jar or crackly bags of Lay’s Barbecue, or even an ice-cold orange Crush fizzing around the edge of the bottle cap. And that’s why I stole the peanut butter, extra creamy. It’s a quiet food. In fact, as long as you turn the lid really gently it’s all but silent. All I had to do was get alone with it. I’d close my bedroom door and listen to my “Haunted Mansion” record for the hundredth time, with the lights off for extra spookiness, and Mom had no reason to be suspicious. Twenty minutes alone with “Wa-a-a-a-ahs” and creaking doors and my jar of Jiffy were pure bliss. There was nothing like that sticky, guilty feeling in the roof of my mouth, in the dark, with my eyes closed. It was hard to get to the bottom of the jar with my index finger, but no worries—I would just lift a spoon the next time.

Traci Mullins loves the art of flash fiction and has been published in Flash Fiction Magazine, Dime Show Review, Ellipsis Zine, The Drabble, Fantasia Divinity, Flash Flood, and others. She was named a Highly Recommended Writer in the London Independent Story Prize competition.