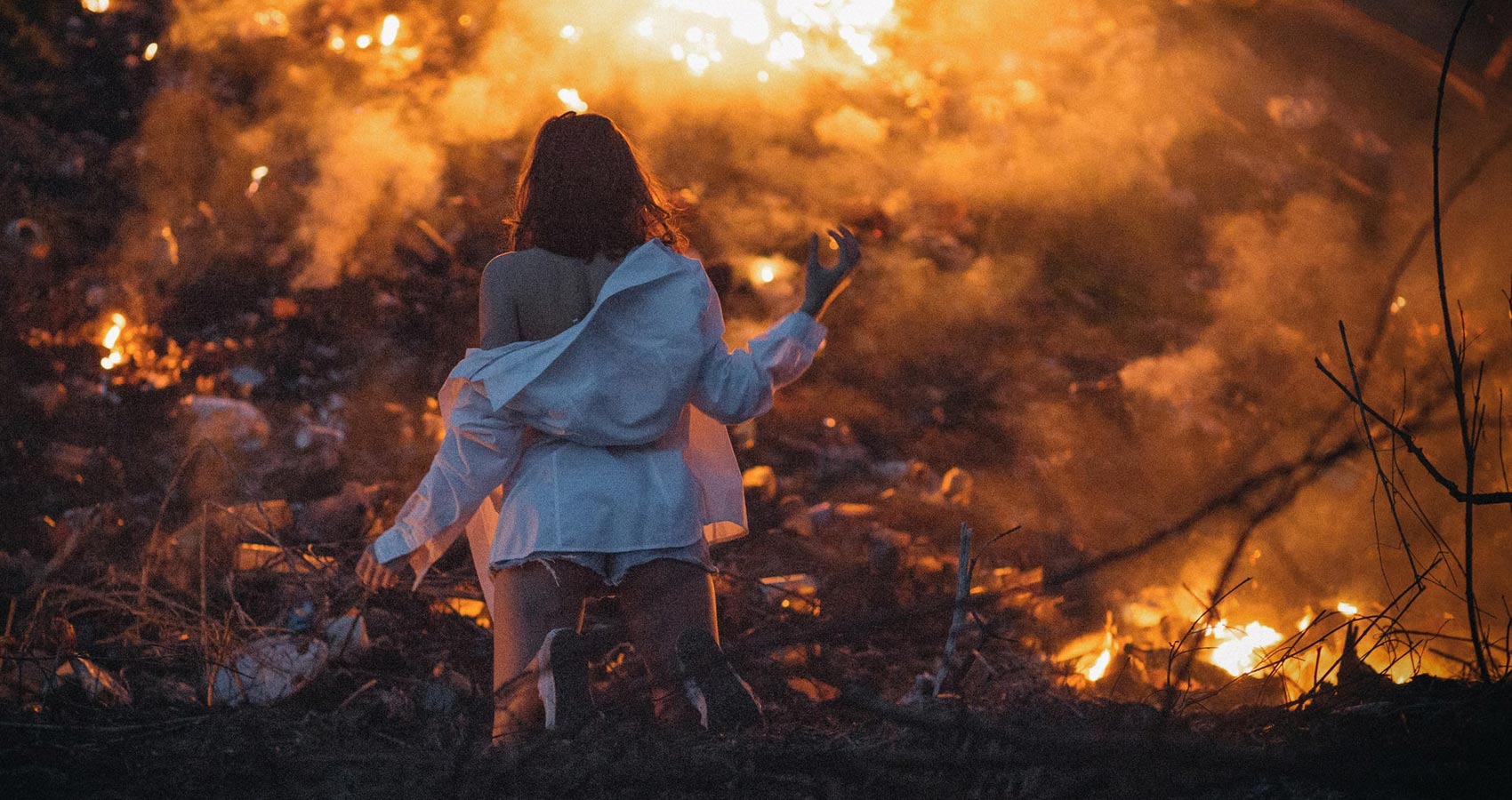 Kaia sat on the ground, her back against the barrack wall. She gazed up at the night sky, and let out a sigh.

It had been one month, twenty-four days, and two hours since she’d been brought here. She had come willingly, hands in the air, under threat of her loved ones being exterminated. She shuddered at the recollection of that word. Exterminated. Gone. Destroyed without a second thought.

Now, her only chance of survival was fighting in the battle created just for her. Propping up dummies and tearing them down. Except these dummies could scream.

She watched as one of her fellow ‘soldiers’ practiced under the moonlight. The trainee, Arrow, was an absolute monster of a man- six foot seven, with muscles to match.

In the distance, he sighed, his huge frame drooping. He seemed disappointed in himself, although Kaia wasn’t sure why. Honestly, she’d give anything to be Arrow McLan. Out of everyone, he had the best chance of survival.

Her thoughts were interrupted by the sudden realization that he was staring directly at her. She waved him over, and he walked over and plopped down next to her. She smiled. After all, if Kaia couldn’t be Arrow, maybe she could win him over, and gain a strong ally. Time for conversation, Kaia told herself.

“So… who’d they threaten for you?” Kaia asked him casually. Being honest with herself, she wasn’t all too interested in the answer.

“They took my wife. Leila,” he said darkly. “It- it was an arranged marriage. But that doesn’t mean I want her to die! And her family… when I married her, Leila’s brother approached me late into the night, long since the party had gradually come to a stop. He flicked out a switchblade. Said if anything happened to her, I would be held accountable.”

A bit more than Kaia had anticipated, but his help meant everything. Gaining his trust was essential. Then again, how would one appropriately respond to this?

She sighed, throwing her head back and sending her gaze skyward.

“For me, it’s my golden retriever, Peaches. Without him, without his comfort and eternal affection, without his neverending devotion to someone who’s not even worth loving…”

“So, a dog. You’re out here, practically handing over your life on a silver platter, forcing yourself to kill innocents painted dark with superstition, for a dog.”

A flash of dark blue, smeared with red. Edges bashing into her brain, each one a backhanded slap of her own worthlessness. Falling, crashing against each ridge, while laughs streamed over her from above. Boys jeering at the pathetic creature who couldn’t even walk down the stairs without tripping over her own feet.

And then he was there. Caressing her battered head, supporting her bruised back. Fur softly overtaking the rough carpeting beneath her. The world faded away as she lay against him.

“He… he means a lot to me,” Kaia whispered, patting the grass beneath her fingertips.

The next night, Kaia sat on the damp grass, watching the stars rise above the dew on the earth. A hulking figure emerged from the barracks and stepped into the moonlight. Arrow arrived once again to sit with her under the night sky.

He nodded to Kaia, and squatted down next to her.

“Ready for tomorrow? They’re sending in just the men to fight. The opposition requested it. It’s the most we’ve ever heard them say, actually.”

Arrow glanced away, then turned his eyes up to face the moon.

“I am, shockingly. But I’m not scared of dying. At this point, death would be a ready escape from this hellhole.”

“Then what are you scared of? Your wife being killed?” Kaia asked.

Arrow shivered under the frigid sky.

“I’m scared I’ll have to kill, and lose my humanity.”

“The death of one’s morality is more severe than the end of their life. If one’s ethics are gone, who knows what else they might do?”

“I’m just worried that when it comes to killing,” Arrow said, “I won’t have a choice.”

The night after the bloodbath, Kaia sat beneath the stars. As black skies rolled over blue, she watched the heavens gleam with carelessness for her and the people trapped within these gates.

Arrow had once again proven himself a worthy adversary, having killed six opposing soldiers. It was brutal, really. He had shot their necks to pieces, leaving their heads rolling in the dust.

“Hey,” a voice said. Speak of the devil, here he was. Expressionless, Arrow slid to the ground next to her.

“You did a good job out there,” said Kaia.

“Uh, I’m impressed, to say the least,” Kaia added in an attempt to sweet-talk him.

“Impressed,” Arrow muttered. “Six men dead in the dirt because of me, and you’re impressed.”

Kaia suddenly remembered his words from the previous night. The death of one’s morality is more severe than the end of their life. Bravery was moral, though, wasn’t it?

“Your technique was excellent, and you fought bravely,” Kaia said, confident that she’d strike a common chord.

“I was brave, huh? Bravery is standing up to your worst nightmare with nothing but a smile. I blew innocents to pieces. That was brutality, not bravery.”

Kaia glanced to the side, thinking about her precious Peaches, and how there was nothing she could do to keep him safe.

“You know,” she said, “there’s people who would kill to be as strong as you.”

Tightening his fists, Arrow shot up and stood tall over her.

Kaia paled from his wrath.

“Before you know it, you’ll have to kill. And let me tell you about killing. It changes you. I can’t sleep at night without hearing their screams and knowing I’m responsible.”

“You thought you were special? You thought you’re unique? You can’t save me! No one can! If I don’t die here, I’ll go home to a wife who barely recognizes the monster she married!”

The morning had come, and with it new struggles of terror and the wrath of the earth. Sand surrounded her, whipping into her face and shattering her every breath. Of all terrains to fight in, deserts were the worst of all.

Kaia faintly heard screams behind her. Fallen soldiers, victims of either the sharp bite of bullets or the vicious fury of the gritty wind. She struggled to retain her footing in the harsh soil, feeling her feet slipping down the dunes.

She heard his grunt of agreement, and bullets whizzed past her face. Kaia pulled up her feet, and nodding her gratitude to Arrow, picked up a quick pace.

She slid past several cacti, and dove behind a sandy hill. Arrow leapt in next to her.

“Thanks for covering me back there,” she whispered.

An explosion rang out from behind them.

“Can you run and talk at the same time?”

They ducked out from behind the hill, and began running. Swerving out of the path of a blast on their right, the two dashed down the battlefield.

“Kaia, listen. Last night, when I said about going away-”

Ducking past a raging missile, Arrow continued as they sprinted.

“If I don’t physically die, the old me, whoever I was before this cursed place, will be gone forever. No matter what happens, I’m dead to the world. And to myself.”

“Arrow, what are you getting at here?”

Arrow sighed, sweat dripping from his forehead. Despite his clear misery, his pace kept up.

“I want you to get out of here before you have to kill anyone, Kaia.”

“H-how? And wouldn’t they k- get rid of Peaches if I desert?”

Barely avoiding another burst on his left, Arrow tackled Kaia to the ground.

“Your life matters more. But I have a plan, and if I can pull it off, it’ll look like you died. Nobody will have to know.”

“You- you haven’t been corrupted by the fires of murder. You don’t need to be cleansed by the flames of redemption. But I do.”

“Arrow, what the hell are you talking about-”

Arrow pulled a grenade out of his pocket.

Arrow grabbed Kaia and thrust her into the air as he pulled the pin.

Kaia flew through the sky, propelled by the fiery winds behind her. She landed in a ball crumpled on the ground.

Kaia pulled herself up. Her arm was snapped cleanly in half, but she was alive. Unlike-

The flames of redemption burned behind her, leaving a trail of smoke blazing through the sky.

Whispering a silent prayer for the damned, Kaia turned on her heel and ran into the night.

Starlight Matis was born on Long Island, New York. They have lived in multiple states, among them being Kansas, New Jersey, and Pennsylvania, which is where they currently reside. They began writing at a young age, and quickly grew into it as their passion rose. They write mainly dark fiction with realistic elements, like in Arrow Strike True.