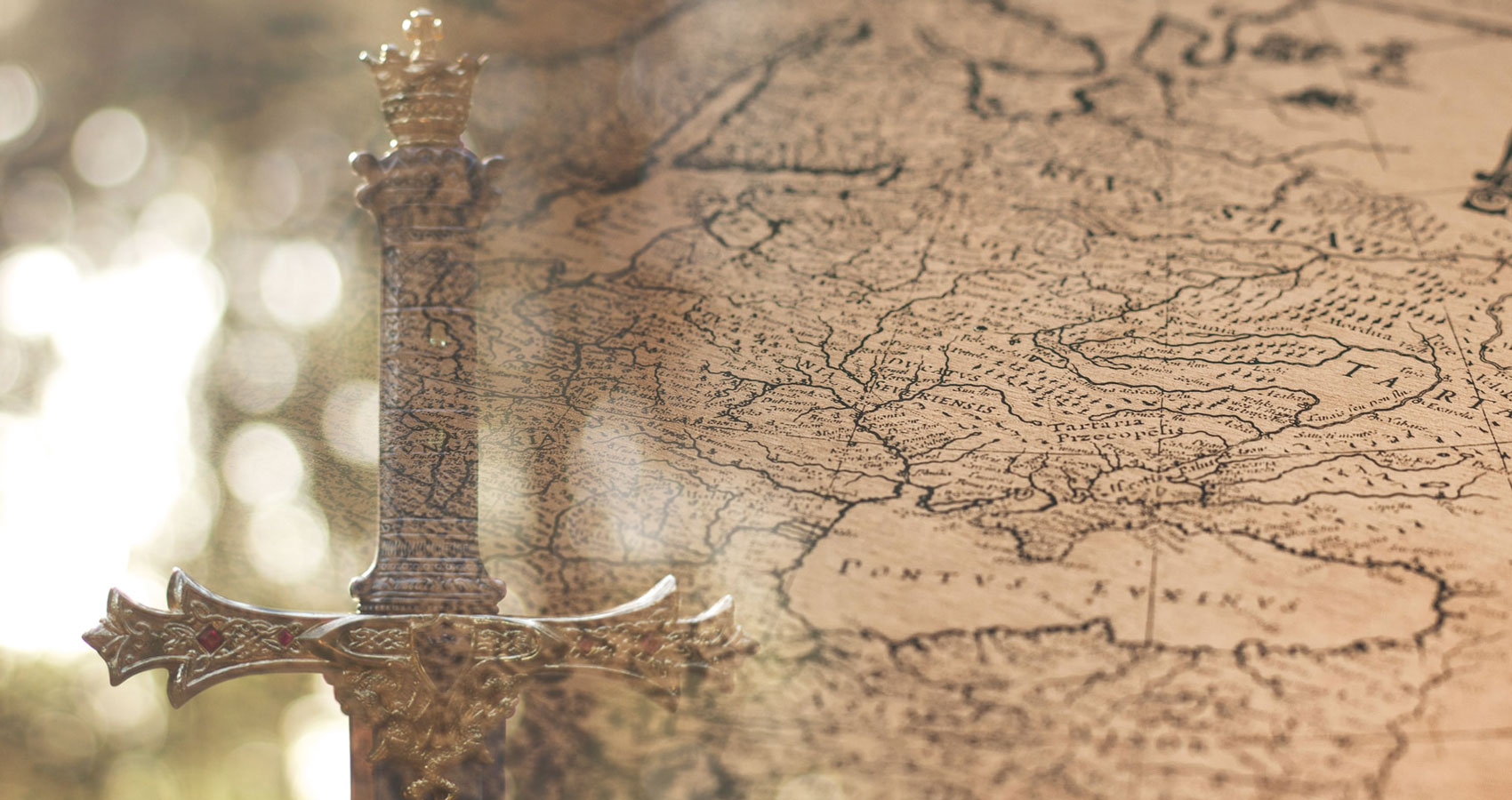 Once when I was a boy I rode out in the general direction of the Twiceborn King, with some fantasy of burying my stolen sword up to the hilt in his undead flesh. I had only a vague idea of where I was going, and no idea of what I’d do once I got there. I made my way from village to hamlet, but before I got to see any battles or castles or magic, before I’d even crossed the river, my father caught up with me and wrestled me home. I’m glad he did. Farm work had made me more than strong enough to swing the sword around, but in my hands it was just a club. I had no coin. No plan. I’d have been just another rotting body in the Twiceborn army by the time the Protagonist arrived to destroy it.

At the time I was furious. I stomped around the forest for a week, returning to the farm for fitful sleep and meals seasoned with bitter silence. My rage softened as I resigned myself a little – ‘you can’t just ride out on a quest, you need a nudge from the Writer’s quill to do things like that and succeed’ – a resignation like thick drizzle, putting out the bulk of my hope without doing a thing to quench my daydreams. I kept on dreaming, and whenever the Writer appeared my hope would flare briefly,  before collapsing back into embers as he rode away.

Once in a while the Writer rides through the town, his horse’s hoof prints welling up with ink as it clops down the road. For a moment, I let myself think that I might have a part to play in the narrative. Perhaps a new Protagonist, a major character, even a villain – or a dashing anti-hero. On his rare visits the Writer pulls a thick tome and a quill from his saddlebags, dips the quill in his horses’ mouth, lets a few excess drops fall from the nib, surveys his creation, sometimes makes a minor edit – and rides away.

Everything central to the narrative happens on the other side of the Kingdom. Long after the event, traders arrive in town bringing news along with their silk and spices – news of the Protagonist’s battles with dragons and necromancers, political intrigue, romance, danger, tragedy, lofty purpose. I hoped that I wasn’t written into the world just so that the Protagonist could eat one of my turnips, or so I could start an unlikely chain of events by spilling my drink on his shirt. I hoped our town isn’t here to fill in blank space on the map.

Everything about me was written to be a farmer in the middle of nowhere: the eyes peering balefully from under bushy eyebrows; the muscles shaped by long years eking turnip and cabbage from unforgiving soil; the literacy just enough to grasp my position as a background character. Like probably all boys, I dreamt of being swept up by that quill into a life of daring. But unlike most men, I kept right on dreaming as season after season passed its course, I kept dreaming when I discovered beer, I kept dreaming when my father went into the ground we tilled. I never married, because I held out for a princess or an elf or a witch. I held out for a romance of the ages, bringing with it the hallowed status of major character, and it tripped up any relations I stumbled into with the women here.

I threw myself into the farm. It seemed as though all the stones I removed crept back into the soil when my back was turned, a never-ending task on top of the normal difficulties of farming. The plough got as chipped in that soil as a sword struck edge-on with a hammer. But in the end I could make a living, living off the tough gristle of the land. I like farming. I like seeing barren fields grow green as the seasons turn. I told myself that I had a useful purpose providing for the community, and I was right, though I still felt troubled by my insignificance whenever I wasn’t too busy ploughing or sowing or harvesting to think about it. Whenever I had rest the old dreams came rising up, the agitation.

Into that restless hole in the belly, beer goes. Pour in enough, the froth rises up through your head, colours your eyes, drives out the demons for a while. Long enough to light up the inn with carousing, then turn in with a pleasantly thick head, and be up in the morning to drive the demons out with work instead. Get good at this cycle and there’s only a few small points in the day when that itch comes back.

That itch was well at bay last night as I rode back from the inn, with a fair buzz, letting my horse pick a winding route nibbling on grass along the path while I swayed in the saddle. I was turning back towards the house from the stable when I saw what looked like two big red fireflies coming towards the farm in the distance. I stood and watched as the two lights drew closer, becoming two pearls of fire. And ultimately, unmistakably, the two burning eyes of the Protagonist’s horse. A creature with the body of a mare, and the soul of a fire spirit. On her back, the Protagonist.

He dismounted, reaching out a hand to me. I burst into laughter, slapping my thighs, struggling to breathe from the spasms as tears ran down my face. He was soon in his own fit of giggles – yes, giggles, high-pitched giggles – and I realized that we were both drunk. When we were able to speak again, he reached out his hand and this time I shook it.

‘Augustus Silver,’ he said. ‘Pleased to meet you.’

‘Tom Walters, likewise. What the hell brings you out here?’

‘I’m just… just riding, Tom!’ He burst into giggles again. ‘All out of wine!’ he said, shaking the last drop from his wineskin.

‘Wine? Huh, I’ve got some proper beer inside.’

So we both carried on drinking in the house. If I’d met him sober, it would have felt dramatic, significant, released a complex mix of emotions, and also I’d have been tongue-tied. As it was, it was just hilarious and bizarre – hullo Mr Silver, old buddy, what a time for you to show up! When we got through to a more thoughtful type of drunkenness, we sat on the porch looking at the twin moons for a while.

‘So,’ I said finally, wiping beer from my moustache. ‘Why are you… Say, what’s going on here?’

Augustus sighed. ‘I suppose you could say that I lost the plot… or rather, I threw it away.’ I waited a long time for more explanation. ‘Lady Goldwyn died. Killed by the latest blasted Antagonist.’

‘Aye. Aye.’ We watched the moons. ‘It was beginning to wear on me anyway. The Writer keeps making new Antagonists, and I have to fight them. I can’t just let them win. I always have an edge in the end, or a deus ex machina comes along. But it’s not easy along the way, it’s a struggle with innocent people dying too often, and I never know – is this one the time I lose? Well, I haven’t lost yet – but she did. I guess the narrative needed a shot of drama. And I’m done. I’m done. Sod the Writer.’

‘I always wanted to be a major character. To matter, do the big things, see magic and… just more than this.’

‘When the Writer takes an in interest in you, you see incredible things. But also awful things. And eventually, you realize that you’re being played with. For the narrative. It gets hard to tell whether you’re doing something that the Writer didn’t plan, or he’s dictating it with his quill. And even if you’re just doing something insignificant, nothing to do with him-’

‘He wrote you so you’d be the kind of person who would do that. Yes.’

‘So, sod the Writer. I rode towards the other side of the kingdom, drunk half the way. I took being the Protagonist and shoved it right up – well, guess he’ll need to find a new one.’

Augustus Silver’s eyes lit up. ‘Hey! Why don’t you take my things?’

‘Take my sword, my armour, my gold, my horse. They’re all from him, I don’t want ‘em. Find something you want to do. Do it because you want to, and if you have the slightest suspicion he’s pulling your strings, just do what I’ve done. Ha!’

‘Right now he’s watching this write itself down – two characters doing something unexpected – probably thinking up some way to get his narrative back on track. Why not give the Writer a plot twist to stumble over, a farmer gone rogue, try to trip the bastard up a little? You want to see the Kingdom anyway, right?’

‘Well, then. And I suppose I could learn to farm.’ He burst into giggles again.

I woke up just before dawn, a farmer’s habit. Augustus was snoring on the table as I gulped some water, then took what he’d left for me and stepped outside. I whistled like he’d instructed, and the mare with flaming eyes galloped towards me. She allowed me to put a saddle along with gold-packed saddlebags on her, and mount her.

I rode up the hill behind the farm. From here I can see the town to the south, the forest to the north and west, and to the east, open country with the sun rising, inviting me onwards to the rest of the Kingdom. The mare pats the ground with her front hooves, impatient to be riding onwards. We could go anywhere, do anything. Holding a sword forged in dragon fire, riding a steed of legend, I pause here, paralysed by my freedom.

I don’t know what story I want to write with the blank pages of my remaining years, in the space outside the plan prepared for me. For the first time there’s no path under my feet, with nobody else to choose my direction, and only myself to blame or to thank for where my steps may lead me. If I am now penning my own role in this saga, it feels like I have writer’s block. I look around, half expecting to see that ink-drenched horse with its rider watching me. But I am alone. I don’t know how to begin this new tale, but I suppose I’ll just have to get started. I flick the reins, and we begin riding east.

Alex Page writes fantasy, sci-fi, and other things at Bookish Leftish Gibberish. His work has been featured in Beyond Worlds Magazine, Elephants Never, The Drabble, and Scarlet Leaf Review. He lives in the UK and also enjoys memes, doggos, and recklessly exchanging goods for magic beans.