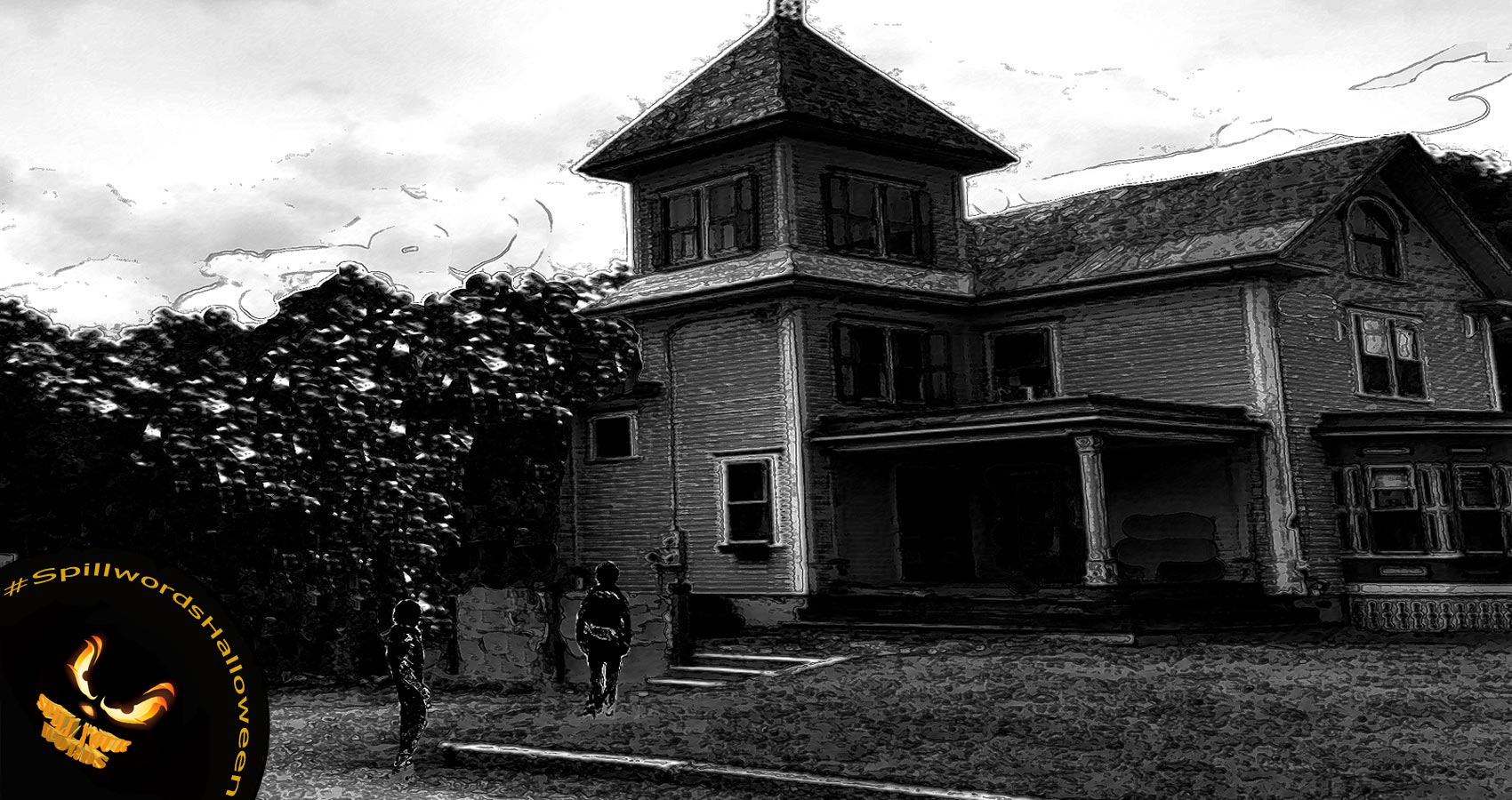 “Hell, no! I ain’t goin’ up there!” Dillon said, holding the paper bag with one hand and pushing Billy away with the other. “That place ain’t right. It just ain’t right. And they got a dog. I ain’t goin’ to no house with no dog!” And he turned and walked back toward the middle of the street.
“Suit yerself,” Billy replied, heading up the steps toward the house, as the barking got louder, “but I ain’t sharin’!” Billy got six steps up, wheeled around and ran back down to the street.
“Told ya they got a dog. Did you see it?” Dillon asked.
“Look up! Look up there,” his voice was shaking and he was pointing to the window at the top of the gable. Billy grabbed his friend’s ear and pulled his head closer, tilting it up toward the roofline. “There! That window in the front! See it? See it?” he repeated. The barking continued.
“I don’t see nuthin.” Dillon said, pulling away from Billy and heading back toward town. “Yer nuts, seein’ things that ain’t there. And I don’t like dogs.”
But Billy knew what he saw; a little boy with long dreds, wearing something white, or that was white once. He grabbed at Dillon’s shirt, drawing him backwards and making him drop his paper bag.
“Hey! Cut that out! Yer gonna make me spill what I got a’ready.”
“You gotta see him!” Billy insisted.
“See who? There ain’t nobody there.” Dillon really wanted to go home. He was thinking that Billy had eaten too much candy and was now seeing things. And Billy was freaking him out. “Let’s git home. Ma’ll be wailin’ on my ass fer sure, it’s that late.”
“I ain’t goin’ til you see that kid,” and he dragged Dillon closer to the fence that surrounded the big Victorian house that sure looked haunted to him. “That window. Up there.” And he pointed Dillon’s face upward again.
“Okay, I see him,” Dillon lied. He didn’t see the boy, but he sure could hear the dog and it sounded like a big one.
“Do ya? Do ya, really?”
“Hell, no. There ain’t nobody up there.” Dillon was beginning to feel sorry for Billy. His friend was losing it, for sure. But then, something moved in the window. A shadow, maybe. He tried to move his feet, but he was glued to the spot. “Uh, uh, uh,” was all he could say.
“You see him! You do! Right?” Billy was whispering now. “He’s there!” And Billy pointed at the front door, as he moved slowly up the steps, closer to the house.
The little boy was now in the window next to the door and Dillon wanted to run, but he could only move with Billy. Something was keeping him close to his friend. “I gotta git home,” was all he could say and he repeated it, over and over, his eyes bulging. The boy was now watching them from the glass panel next to the front door. They moved closer and were standing at the bottom of the stairs that lead up to the wide front porch and the massive door when the light came on and the door opened.

I’m a ‘late bloomer,’ having gone to college in my thirties to prove to my mother that I could, but also because I was an out of work single mother with no marketable skills. I worked as a stitcher in a clothing factory to support my two children while I attended and graduated from Plymouth State College at the age of 42. I have a B.A. degree in Anthropology/ Sociology, with a minor in English. With two young children to raise on my own, I put off writing and had several ‘real jobs’. My writing credits include publishing and editing a monthly newsletter for the I-93 White Mountain Chamber of Commerce, where I was CEO for three years and for the Greater Dover Chamber of Commerce, where I spent seven years as Membership and Communications Director. I have lived in Dover, NH for the past 22 years with my Israeli husband and two cats. Thanks to the pandemic, I have completed three novels. I write under the pen name of Carol Estella Brown, which, as I only discovered recently, was my father’s real birth name and should’ve been mine. Now retired and a grandmother of three lovely grown girls, and nearing eighty years of age, I’ve decided to put to pen all those years of experience, much to the delight of my younger husband, who feels that I could, maybe, let him retire one day soon, especially since our two cats won’t work.