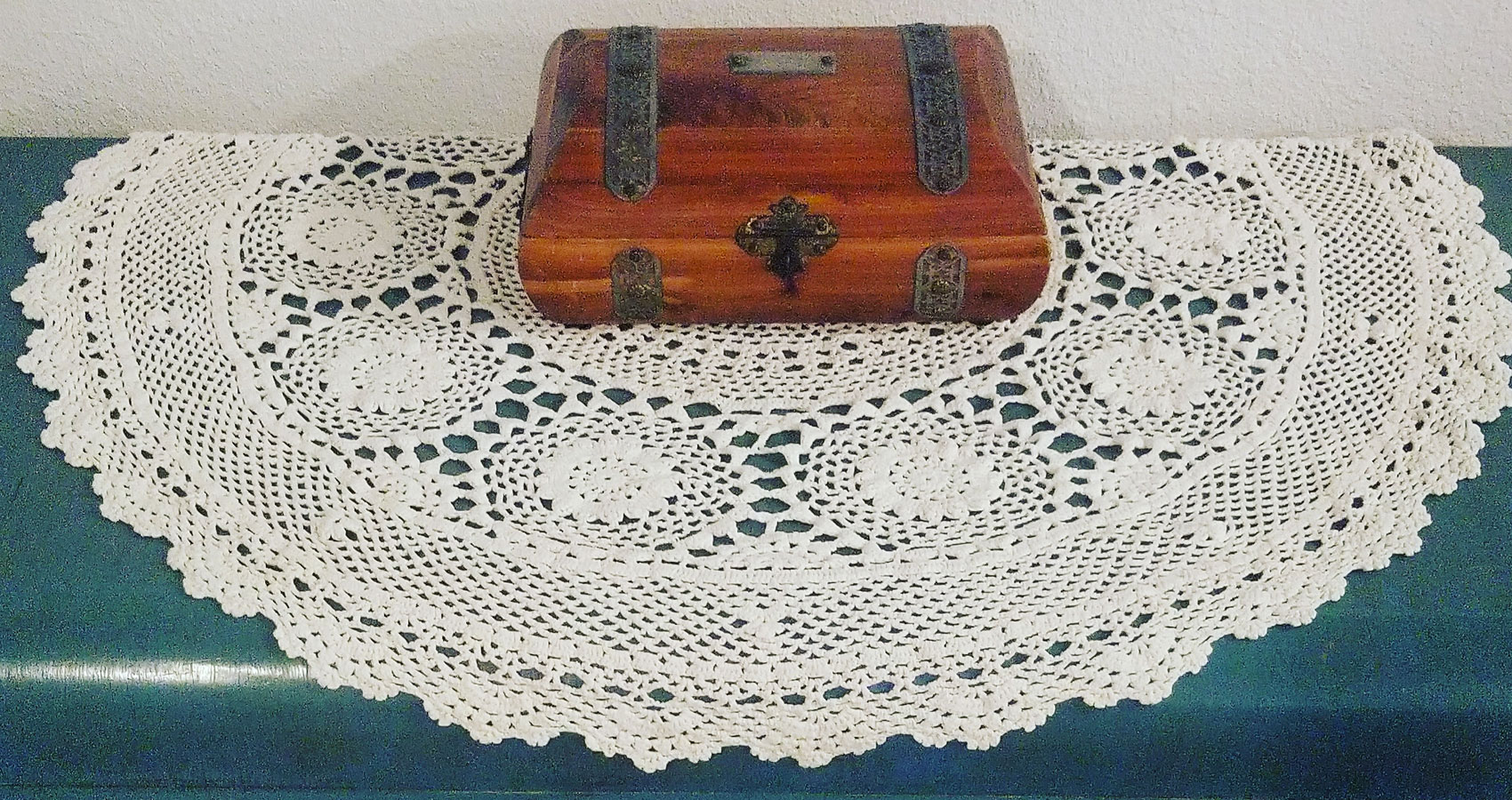 I am a unique, cedar chest. My purpose is to keep priceless treasures safe and secure. Although other woods may grace my outside, inside, cedarwood lines my inner walls, bottom, and lid. Cedarwood is a natural preservative which protects by keeping out moths and other insects.

In 1964, a young woman became my new owner. She refinished my exterior, changing the color to an antique blue, and I became her hope chest. The young woman would always keep me against the footboard of her bed. Periodically, my lid opened, and she placed unique treasures inside my cedar walls. Happiness was all around me, and I could always hear lots of laughter filling the air.

In 1968, my young woman opened me to place in new treasures, but this time with her was a young man. They seemed so happy and talked about their wedding. I did not know what to make of these strange new treasures. There were newspaper clippings, tiny rice bags tied with ribbon, small white engraved napkins, and many pictures, but I knew that my job was to do my very best to take care of these things.

Soon, I did not hear my young woman in the house, and I missed her laughter. It seemed as if a lifetime went by, but then one day I heard her and the young man’s voices again. Laughter filled the air around me, as they picked me up, then carried me to a pickup truck. After a short drive, I was unloaded from the truck then transported into a little white frame house. Again, I sat against the footboard of a bed in a bedroom. This time the bed was shared by the young woman and young man.

Suddenly one day, the laughter stopped, and there was only one voice heard in the house, it was the voice of the young woman. A sense of sadness, heartache, and fear seemed to take over the house.

A box sat on my lid, and I could hear it being opened and closed at night. Night after night, I listened to the muffled tears and prayers of the young woman but was helpless to help her. I knew my job was to do my best to take care of the treasures that the young woman and young man had placed inside my lined cedar walls.

Months passed, but the sounds of tears and words of prayers continued until late one night, the phone rang, waking the young woman. The fear in the bedroom skyrocketed to new heights, as she rushed to answer the telephone, but quickly laughter and excitement filled the home again. The young woman danced around the house, thanking God for answering her prayers while getting dressed then she left.

Soon, I heard the young man’s voice in the house again, music played, and I could hear singing plus the shuffling sounds of dancing feet. Much too soon this ended then once again, the sound of tears, heartache, and prayers returned to the home. Again I heard the box sitting on my lid open and close, over and over. More months passed, and the house was sad, but I did my job to keep my unique treasures safe.

One evening the phone rang again then the young woman’s laughter and excitement filled the house. The young woman was singing and dancing through the home, repeating three words, “Thank you, God.”, over and over. Suddenly, the young woman opened my lid then placed the box that had sat on my top inside my cedar lined interior then closed my lid. The next morning, I heard the young man’s voice again. Happiness, music, laughter, and love returned to the house once more.

The young man and woman would move many times through the years, always taking me with them to each new home, and I would have a special place at the foot of their bed. I remained faithful in taking care of their treasures inside me just waiting for the day they would reopen my lid. Years passed, but they did not open my cedar chest lid again.

One day I felt a terrible sadness fill their home, and many people came for days to visit. I heard many tears from all who entered the house. Once again, the young woman was praying and crying as if her heart had surely broken, and I never heard the young man’s voice again. Slowly and with time, the young woman stopped crying as her heart began to mend then allowed the laughter to return to the home.

One day the young woman moved me into a new place which was not at the foot of her bed but in a dark new home. Sometimes sunlight would enter my new home, and I could hear her voice and voices of others, young and old, but nobody came to open my lid. Although missing the young woman’s voice, I remained faithful, keeping the treasures inside me safe because I knew they were extraordinary.

Early one morning, I heard the young woman’s voice as she entered my home. She quickly unstacked the boxes that sat on top of my lid and opened my lid. She opened the box that she had placed so many years before inside me for safekeeping. I heard her exclaim with surprise in her voice, “His letters!” as she quickly closed my lid and left my house.

A few weeks later, two young men would enter my dark house and take me to a new home. In this new home, I would be opened many times by the young woman, and she would thank me, telling me what a fantastic job I had done keeping her treasures safe as she gently cleaned and polished my antique blue exterior.

Now, I listen to music, laughter, and a whole lot of typing going on. Sometimes tears and heartache are heard, but mostly I feel a deep, pure endless love in my new home. Even though I do not understand what has happened to the young man and do not hear the young man’s voice, I can feel his presence and his warm love filling the room.

Although growing older with age, I will continue to hold old and new treasures for my young woman who has become much older too.

I am a unique, cedar chest. Not only do I hold special treasures, but I have absorbed unique emotions and sounds. I am loved.