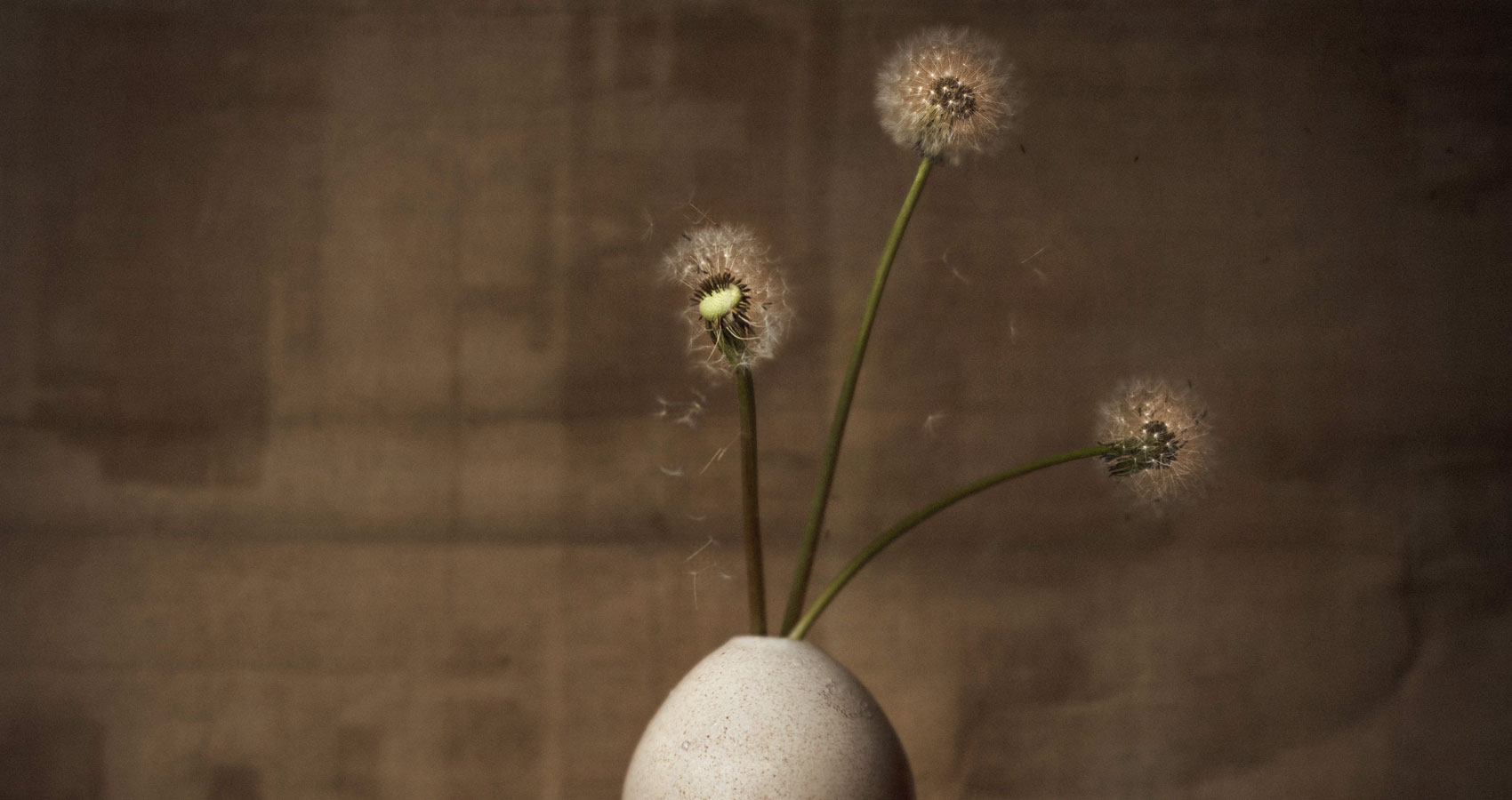 Celeste kept dandelions in crystal vases. The flowers were already dead. Still, she changed their water daily until every seed had fallen to the window ledge. One windy winter’s day, when the last of these capitulated, Celeste gathered them all together and pressed them into her palm like a little, squashed mouse, left her apartment, and walked three miles to the closest meadows in conditions better suited to a polar bear. There she unclenched her fist and watched the seeds blow away.

I met Celeste in a flower shop whilst buying a bouquet for my grandmother’s eightieth birthday. What else other than chocolates can you buy an octogenarian? They’ve already had and lost everything they wanted except for life itself. Celeste was returning a rose.
“It’s still alive.” She held the blooming, crimson flower outstretched as though it might bite her. “See?”
Her measured words irked the florist.
“That’s good, isn’t it?”
“No.”
The florist licked her thin lips, puffed out her cheeks, and tried a different tack. “When did you buy it?”
“Two months ago.”
It was my turn to look startled. The vibrant rose stood out against all those myriad other colours of a shop crammed with such like blood on a ghost’s finger.
“Two months!”
“I water it daily.”
“It shows,” said the florist, a new appreciation for her customer fledging.
“But it will not die.”
“It will eventually.”
“How can you be sure?”
“Everything does,” said the girl behind the counter, suddenly older, the wrinkles at the sides of her eyes, deeper, darker.
Her customer’s head dropped.
She had her back to me, but her disappointment etched itself into her slumped shoulders, her heaving breaths. I imagined her eyes watering as though told a car had just run over her fa-vourite pet.
She sighed a sigh of disappointment. “Thank you for your trouble.”
“You’re welcome,” said the florist. The varnished fingernails, which had tapped an inces-sant irritation upon the glass counter, stopped.
I wanted to turn back to the heaped chrysanthemums, the lilies and the tulips, apologise for invading her private moment, but I couldn’t. I just couldn’t. It was her eyes that held me as she spun away, disconsolate and broken. They stood out like two full moons, filled with mel-ancholy at having strayed into the sunlight, destined never to grace the night again.
I had seen all kinds of pain in my time in the armed forces, physical, mental and worse, but nothing could’ve prepared me for hers.
Later, I often wondered had Celeste’s curtain of raven hair swung a little to the right, if it might have obscured her sorrow? Had she drawn her cowl up and over those exquisite fea-tures, if it might have spared me her pain? But in such ways are destinies sealed. I dropped eve-rything and raced after her.
“Miss.”
She slowed not a jot, if anything, speeding up in long, elegant strides.
“Miss!” This time with purpose.
Faster still she tic-tacked her way along the pavement in six-inch stiletto heels.
I ran.
She’d made it around the corner when I caught up. My hand fell upon her shoulder like a gravedigger’s shovel on saturated turf.
She stopped dead.
“Miss,” I repeated, “are you alright?”
I’d wanted to introduce myself, tell her I’d been in the shop too. Instead, a blurted, pathet-ic whine.
“Why?” Her voice was like a fine whiskey in a glass just out of reach.
“You seemed devastated. I was worried. People do things.”
“Do?” She turned like Venus appearing from behind a midnight cloud. She gleamed.
I winced. How I wished I’d thought it through. “People do things they regret when un-happy.” That was quite a good comeback, but I still sounded like a jerk.
“And what do you intend to do about it?” She stiffened as she put great emphasis on the second do.
“Return this.”
I reached into my coat and passed her the rose she’d left, and I’d snatched. One red petal tumbled to the ground.
She gasped, her eyes widening to saucers.
Two fates were sealed.

We courted, grew comfortable, moved in together soon after. The rose died the moment I dropped my suitcases on her living room floor.
“This won’t do. It won’t do at all,” said Celeste, shaking her head.
“Am I in the way already?” I joked, fearful of the reply.
“No, silly, the flower.” She bit her lip. “I need to try something else.”
We collected dandelions later that afternoon with a care afforded crystal. Celeste selected only those who’d shed their petals and made sure every seed was still intact. These she checked again when she unwrapped them at home. Not a one was missing. Celeste assigned each a vase on the kitchen window, north-facing, which was odd, and spaced them equally. She then smiled like a painter having applied the last brushstroke to a masterpiece and made us both cof-fees.
Every day was the same. All happy, I might add, if a little strange. Hers went like this. Get up. Wash. Dress. Tend to the dandelions. Get out the laptop and do some work, which went for us both. Eat. Walk hand in hand for several hours, smiling and laughing at each other as though kids half our age. Return home. Tend to the dandelions. Chill. Go to bed. She always cast an eye to the vase as she turned off the light, whilst I pretended not to notice.
All those moments when not tending to the dying flowers were as happy as a dream. The problem was happiness didn’t suit Celeste. She lived for the dying time.
I once asked Celeste why she did it? Why her obsession with tending for the doomed? Her response came swift and startling.
Her features paled, eyes darkened, bottom lip trembled. She stooped closer like a woman twice her age. Her brows furrowed. Celeste spoke. “Because.”
That was it, not another syllable. She stood straight-backed as the eclipse departed and went to put the kettle on.

The change came when the first seed dropped silently in the night. Celeste went down-stairs first. I heard her gasp from the shower and came running. She stood in the centre of the kitchen cradling a dandelion seed as though it a baby. Her entire body shook.
“Are you alright, love?”
“You’ve asked that already.” She placed the now dead dandelion beside the vase.
“Have I?”
“The day we met.”
“That was ages ago.”
“Was it?”
She reached for her coat and left. This was the first time we’d been apart since moving in together, and it chilled me from my bare toes to my teeth.
Celeste got up earlier and earlier after that. She’d draw a chair up to the kitchen window, sit and watch. She did this long before dawn deigned to rise, the night still dominant, darkness still in thrall.
I often watched from the doorway, having sneaked down after her like a burglar with nothing to steal. I wanted to say something, anything, but the stiffness of her posture, the fin-gers clawing at the chair arms said not. Yet come sunlight and a new day, and Celeste would return to her usual self. I breathed a sigh of relief each time. All appeared well. But unlike the outside, the inside was harder to see.
Another seed fell, and then another. It was like she wanted them to drop but refused to persuade them. The dandelions had to die of their own accord. This was the pact she’d made with herself. And, I supposed, with me. Soon, only one remained.

The dandelion defied all known laws of nature. It persisted where its brethren had fallen. It continued long after the golden summer, beyond the rusting autumn and deep into a bleak, sharp winter. But as the frost made patterns on the window glass and those first few flakes of white fell from the sky, its life finally waned. One by one the seeds dropped, never falling far from the vase.
Celeste gathered all those fluffy, potential lives together one cold January morning. A strong wind swept up the driveway, seeking to dislodge the fence panels I’d fixed rather than replaced. The gutters rattled, the chimney, too. When one sudden icy blast rattled the letterbox, it signalled a changed Celeste. The inner darkness returned, and she refused to speak.
She left the house without a why or a where and stepped out into the raging blizzard. I went with her. I had to, even though she hadn’t asked.
It was like we were part of some unseen funeral procession. I even imagined the coffin weighing upon my shoulders. My feet felt heavy, my eyes too. The conditions worsened, as did the experience.
Yet if Celeste bore the same burdens, she revealed nothing. Her head remained high. Her eyes pierced the horizon. The black cowl she’d worn that day we first met flapped wildly but remained pinioned, tied so tight at the neck as to noose her. Not one long, raven hair escaped. She remained immaculate throughout.
We walked for hours, though the distance was less. Out beyond the terrace houses, the market, over the river and into a place less meant for man, we journeyed. Here, she left the path and crossed the now white-carpeted grasslands.
In the summer, this place was one of wildflowers, ragged hedgerows and trees. A land-scape that ordinarily chirped and rustled and shone and glowed, now, stood bereft of life. Like everyone on the East side, I loved the meadows. It reminded you there was a world out there beyond the grime-ridden windows, one full of colour and hopeful tomorrows. This frozen sce-ne just stank of death.
Celeste came to a stop as far from anything else as she could. She reached into her pocket and withdrew all those seeds she’d gathered.
“Would you say something?” she asked.
“Like what?” I blurted.
“Something nice. Something final. A few kind words for my daughter.”
“I didn’t know you had a daughter!” I said, surprised.
“Once, for as long as it took a flower to fall.”
With that, she opened her palm, and a little of us both blew away.