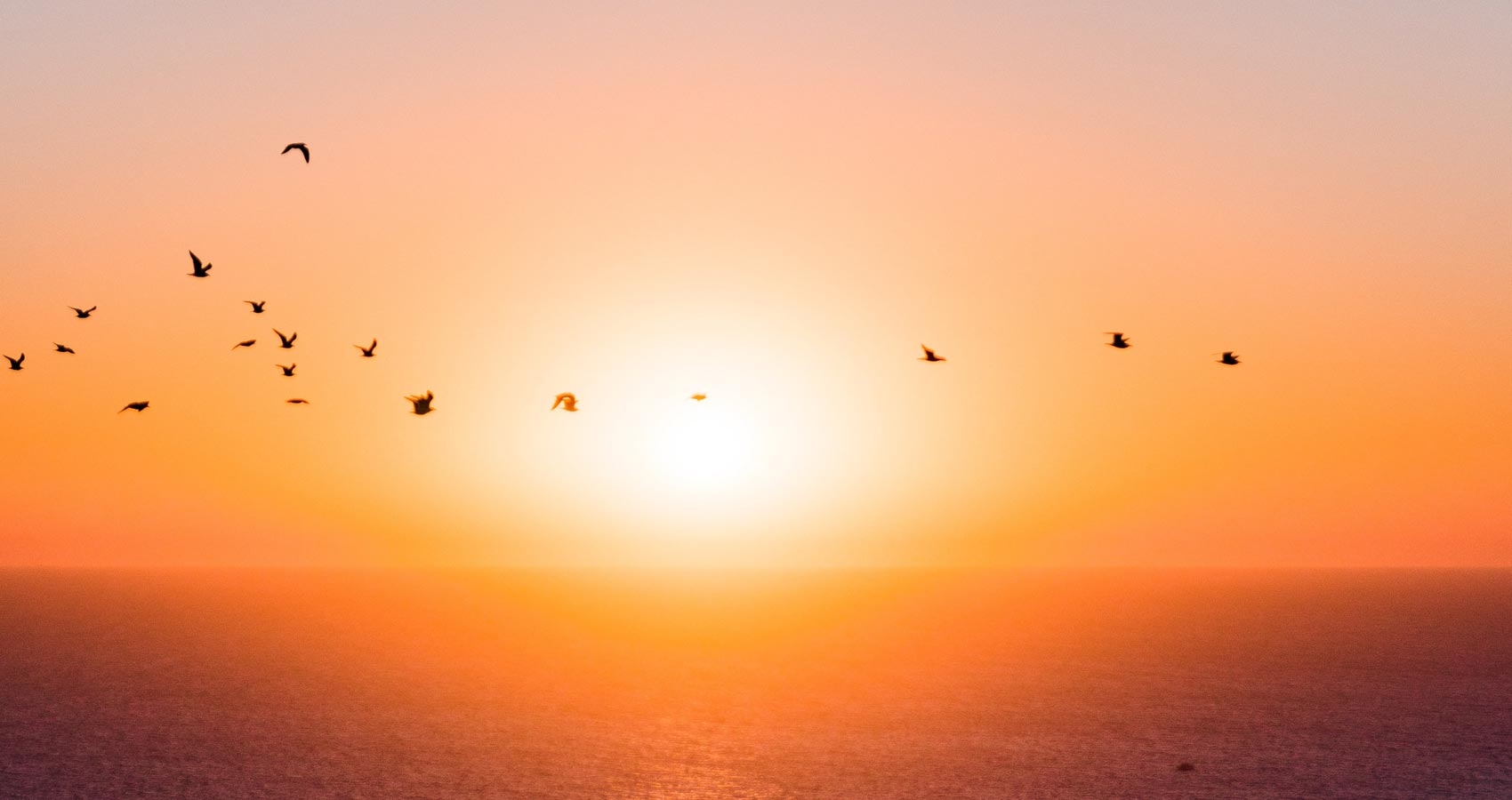 Yawning from the palaces in the sky,
Ascending from the womb of the sea,
Painting its signature golden dye
Upon the halls of air set free,
It arrives with a fresh smile,
It arrives waving at the Earth,
Riding rays of light so agile,
It heralds the news of its birth.

Time tellers dutifully display sevens,
While “Prince Sun has arrived!” yell the Heavens,
“Your Majesty, we awaited your presence.”
The youthful star waves back with benevolence.

Birds conjured chirrup harps, roosters picked up vocal violins,
In unison, they sang of the forthcoming dawn
Of the blossoming Sun’s righteous era,
From every patch of soil, sand and lawn,
Reminding all of flora and fauna,
That the pleasant promenade of light has begun!

From afar, Princess Luna slowly hid behind the astral curtains, shy,
Her silvery servants desperately followed.
Changing the colors of the celestial stage slightly made her cry,
But she knew the might of the Prince could have hers overshadowed.
On a foreign bed of azure, she sleepily faded out of view,
Leaving behind only a faint pearlescent hue.

The Sun inspected the assembly of his Peoples,
“Ah, here come the Clouds!” he spotted his contrasting disciples
Riding atop wispy winds galloping swift,
“Hmph!” snorts Cloud Nimbus, seeking to broaden their physical rift,
“We Clouds can bloat out your radiance so appraised!”
Aghast with awe, the kingdom of the Sky exploded
Into a fog of blaming and blasphemy.
By the natural orders described by Ptolemy,
Advocates of the Weather flocked towards the commotion,
“Sire, we admit apologies for the lack of locomotion,”
Judging the situation, they sincerely bowed,
“But we’re afraid the clouds have contested the roads we plowed.”
Expecting conflict and chaos, the atmosphere fell grim;
Instead, the golden prince respectfully disagreed.

“My domain is free, let all heavenly beings live their dream,”
The Sun ordered by the face of his royal decree,
“My cloud brethren may strive to defeat me, but in the end,
All life remembers who remains steadfast, on whom to depend,”
Alas, the Sun lifts his hands, exhibiting his palms of power,
“The subtle differences between us were granted by birth,
For I provide sustenance through light, you via shower,
But affirm as your own the way you interpret your worth!”

Hushed as they were, Cloud Cirrus took responsibility for their legion,
“My deepest regrets, Prince. Our elders know no self-esteem,”
And she dragged Nimbus away like luring a wild pigeon.
“May your reign be victorious; may your sister gleam!”
With that, the clouds were finally absent from the solar focal region.

“Praise be to the King of Heavens! Praise be to Him for your Blessing!”
Exclaimed all lifeforms surfaced below the Sun’s sacred gaze,
“Praise be to your Creator, ruler of Night and Day; for you, we sing!”
Reminded of the God, the Sun let loose his full form, ablaze!
Dancing through dew drops, rampaging through rain,
Dictating the darkness, purging ecological pain,
Light echoed in every shape and color,
As photons marched in waves of honor.

Participating playfully in Newton’s prism,
Motivating rainbows to climb out of their closets,
Catering to philosophers the sweetest topic of surrealism,
Diving into copycat glass and watery pockets,
The Sun left his holy mark in a state of hysterical sarcasm.
Alas, flags of the Sun’s ascension were already up;
Eyes awakened, chloroplasts held out their cup,
So the solar syrup stormed out, caressing every fan,
Directing blind plants, making skin tan,
The sun had risen – every Earthly object now greeting “Hi”.

Dewan M.I. Mukto is an innovative and creative fellow who loves to work and demonstrate his skills and talents over a wide range of industries and sectors. He often formulates novel concepts to aid in his objectives. Hailing from Bangladesh, he maintains a global presence by contributing to the fields of art, music, literature, science and technology. He is a hobbyist author and poet, often referring to the act of writing as 'materializing' his emotive expressions and summoning them onto this Earthly dimension.